Since premiering a year ago, Amazon’s The Marvelous Mrs. Maisel has snowballed from a critically acclaimed gem into a breakout hit. Amy Sherman-Palladino’s vivid, exuberant comedy about a 1950s housewife who discovers her true calling in Manhattan’s comedy scene enjoyed a sweep at the 2018 Emmys this fall, cementing it as the flagship success story that Amazon Prime Video had long lacked in comparison to its streaming competitors.

Debuting as it did less than two months after the Harvey Weinstein exposé that sparked the #MeToo and Time’s Up movements in Hollywood, Maisel‘s fizzy, fast-talking story of female empowerment took on a cathartic extra layer of meaning. Having separated from her unfaithful husband, Rachel Brosnahan’s Midge gradually comes to recognize just how limited her life has been. Season two, which premieres Dec. 5, will find her continuing to navigate the choppy waters of life as a working comic, while simultaneously trying to preserve her old life by keeping her new one a secret from her parents (Tony Shalhoub and Marin Hinkle).

For Brosnahan, the meteoric success of the show hasn’t changed the experience of filming. “It still feels like we’re shooting in a vacuum a little bit, because it’s a really intense show to shoot,” she tells The Hollywood Reporter. “We have a lot of pages in a very short period of time, really long hours, and so we do get to escape a little bit. We’re so grateful that people have responded to the show the way they have, and then we get to dive back in and disappear to do the work some more.”

That spirit of diving in and getting the work done drives the season’s exhilarating opening sequence, which picks up with Midge following a pair of significant setbacks in the season one finale. Scored by Barbara Streisand’s “Just Leave Everything to Me,” a tracking shot swoops below a Manhattan street to reveal Midge doggedly working the underground switchboard at the department store where she once enjoyed a prime position on the makeup counter. Although she’s been demoted at her day job and banned from performing stand-up at her home club, the Gaslight Cafe, Midge’s indomitable energy is infectious. “We wanted to start the season off with something musical and very energetic, especially since we were going to see Midge sort of in a dungeon,” creator Sherman-Palladino tells THR. “But even in a dungeon, Midge has energy and perk and a great skirt. No dungeon will hold that skirt down!” 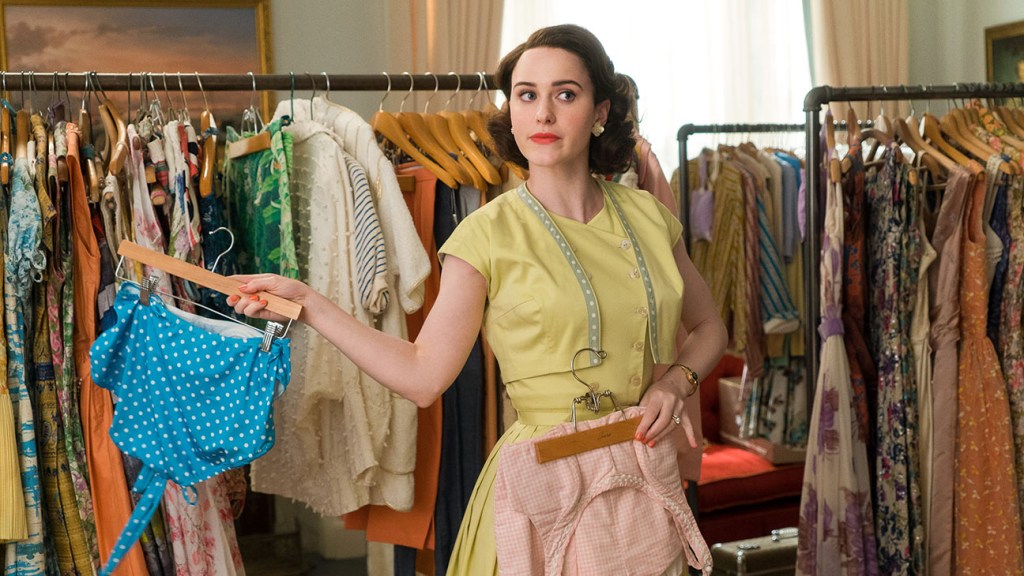 Of the Streisand song choice, Sherman-Palladino said: “I got hypnotized by the song on a JetBlue flight where I was watching Hello Dolly. I got obsessed, and the whole concept of ‘just leave everything to me’ is just so Midge. She can just step into any void and take it over and make it better.”

Where the show’s first season was grounded firmly in Manhattan, bouncing back and forth from the Upper West Side to Greenwich Village with scarcely a glance at even the outer boroughs, season two is a lot more ambitious in scope. Four out of its first five episodes are set and filmed extensively outside of New York City, in Paris and the Catskill Mountains — and while it’s tempting to assume that the shift is the result of a bolstered production budget, Sherman-Palladino and her husband and fellow exec producer Daniel Palladino say both location shoots were in the cards before the show’s awards sweep.

“Even by the time we got to the Golden Globes, we were well into figuring out what season two was going to be,” Palladino explains. “We went to Paris because we had laid in groundwork for it with Rose [Midge’s mother], that she had happy memories in Paris where she went to school, and so having become unhappy with her circumstances, we thought she’d run to a place where she was unabashedly happy before she got married.”

The idea of taking Midge and family to the Catskills for the summer, meanwhile, was in the works from the very beginning of the show. “We told Amazon pretty much while we were doing the pilot that we wanted to re-create the Catskills in season two,” Palladino said. “It’s an emblem and a big part of Jewish cultural history here in New York and the surrounding states: the Catskills was how you got away from the heat before there was air conditioning. It’s where people went to get fresh air, away from the smells and the trash and all of that, and it’s now a sub-culture that I think less and less people know anything about.”

The Catskills trip will also spotlight a major source of conflict in the season: Midge’s somewhat oblivious privilege, in contrast to her manager Susie (Emmy winner Alex Borstein). “There’s a huge discrepancy between what they have,” Palladino says. “Midge is still pretty sheltered right now, though she’s learning more about the world, and I don’t think she truly understands Susie’s predicament and her living situation, and the fact that she’s really out on a ledge here for what she’s doing for Midge. That’s going to play out a lot more in season two.” Palladino also hinted that the later episodes of season two will reveal more of Susie’s background and her family, which will “make you understand a little bit more of why she is who she is.”

Despite Midge’s best efforts to keep her two worlds compartmentalized, her estranged husband Joel (Michael Zegen) discovered the truth in the season one finale. Season two will find those lines continuing to blur, Brosnahan says. That creates more opportunities for the entire ensemble to work together. “In season two, you get to see a lot more of the whole family. Those scenes were really fun to shoot, and crazy, just to get to see each different actor and character have moments to shine. We really got to dig deeper into almost all the relationships on the show.”

Following the revelation of Midge’s secret life as a stand-up comedian — a career Joel once dreamed of for himself — their already-unresolved relationship becomes more complex than ever. “The big question at the end of season one is whether or not Midge and Joel are going to get back together, and that’s explored throughout season two,” says a spoiler-conscious Brosnahan. “They have children together, so they’ll never be completely out of each other’s lives, and there may be various points where they feel like they’re back on the same page. But just as quickly, one of them will always take a step forward while the other takes a step back, or sideways, or on a diagonal. They will, as is true for so many relationships, continue to just miss each other, perhaps forever.”

This moment of reckoning with Joel is just the beginning of a much larger realization for Midge: that if she hopes to find real, lasting success as a stand-up comedian, it will come at a price. “This is the first signal to Midge that it’s going to be hard to sustain a relationship with the path that she’s taking,” Sherman-Palladino says. “Not just with men, but with anybody — with family, with friends. It’s all about to change.”