When Rachel Brosnahan flew to Los Angeles for an informal screen test while auditioning to play 1950s housewife turned stand-up comedian Midge Maisel in Amazon’s The Marvelous Mrs. Maisel, she was deathly ill. But she wanted the role badly, so she rallied and made it to California to meet creator Amy Sherman-Palladino and executive producer Dan Palladino — though she could barely stand.

“I thought I’d gotten the plague or something. I was dying of some mysterious illness. Literally, I’ve never been so sick in my life. Could not get out of bed. There was no way I could get on a plane and make it on the date that they had asked me to come out; and I was panicking because I wanted it so badly. I felt like I was a long shot for it, since I’d never done comedy,” the actress tells The Hollywood Reporter.

Luckily, she was able to get on a plane a few days later — though she wasn’t feeling much better.

Why Amazon's 'Marvelous Mrs. Maisel' Is a "Solution" to Hollywood's Problem

“I was sick as a dog. I didn’t want to touch anyone. Every part of me was wet with snot or sweat. It was disgusting. I don’t remember anything about this audition other than that I had tissues stuffed down the back of my pants so I could keep blowing my nose. Amy asked me to stop a couple of times and go powder my face because I was sweating so much. I had to take my shoes off at some point because they were just pooling with sweat. I created a new habitat in that audition room.”

Disgusting, embarrassing — but nothing Midge Maisel couldn’t get past, and clearly something Brosnahan did. (“It must have gone OK, because here we are,” she jokes.) Midge thinks she has the perfect life — two kids, an apartment on New York’s Upper West Side, a businessman husband who adores her — until said husband leaves her for his secretary. But instead of throwing herself into finding a new husband to provide for her, she dives into the stand-up comedy scene instead — something she discovered while supporting her husband’s hobby. 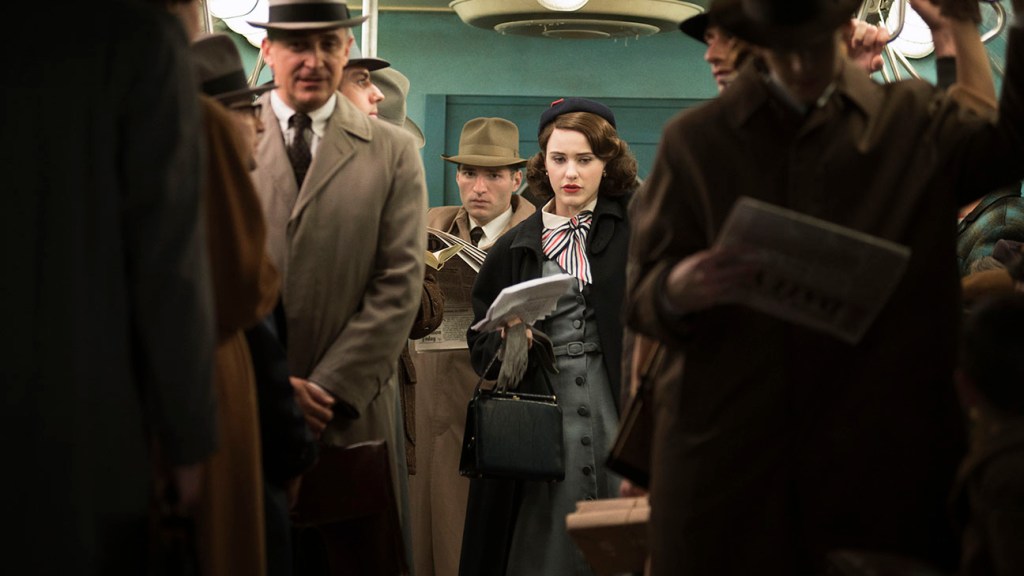 “Midge is very single-minded,” Brosnahan says. “She doesn’t know any way but forward. She doesn’t know how to do anything not 125 percent. I think something that drew me to Midge, which I often don’t see in characters — in female characters especially — is that she’s insatiably curious. She’s somebody who doesn’t like to not know things, and I can relate to that.”

“I love that this story is a second coming-of-age at a time when that wasn’t encouraged or expected from women,” she continues. “I also think what drew me to her is that, when I was reading this script, I realized that I have read so few, and maybe no, characters as unapologetically confident as Midge is. And I’ve certainly never played one. I know so many extraordinary women who I never get to see represented on screen, and that’s shameful. I’m so grateful to Amy and Dan for putting this extraordinary woman out there. We need so many more. This is one story. This is one woman, and there are so many women whose stories haven’t been told.”

While the actress, who studied acting at NYU, has never done comedy before, she is intimately familiar with the rigors of live theater.

“I find theater terrifying. There are no do-overs, you know? It’s all happening live. You need to be in it 100 percent at any given moment, and the audience is right there. I’m really intimidated by theater, but it is my first true love. I love theater. I love that anxiety,” Brosnahan says. “I don’t know if it helps with the confidence, but it certainly helps with a work ethic. Growing up in theater teaches you that you have to bust your ass at any given moment. Growing up in the theater helped with [learning] the amount of work that’s necessary to do this job. It’s so much dialogue. This woman never shuts up — in a way that I have loved every second of but has been immensely challenging. I think that theater definitely helped prepare me for that.”

Midge is outspoken, which is something Brosnahan says she has always been. She’s also politically active — just check her social media for the cause she’s championing at any given moment.

“I think I kinda came out of the womb that way. My dad used to tell me that I came out with instructions. I’ve always been very outspoken, very opinionated. I think everybody, especially every woman that you speak to, has gone through periods of their life where they feel uncertain or insecure. But I’ve been fortunate in my own life never to have gone through extended periods of crippling insecurity. I think where I feel the most vulnerable and anxious and sometimes insecure is when it comes to my work. It’s arguably the thing that I care about the most. So that’s where I feel the most uncertainty; and to try, in my work, portray a character who is as unapologetically confident as Midge was really challenging — but a welcome challenge, and one that actually I think was probably really important for my own personal growth as well.” 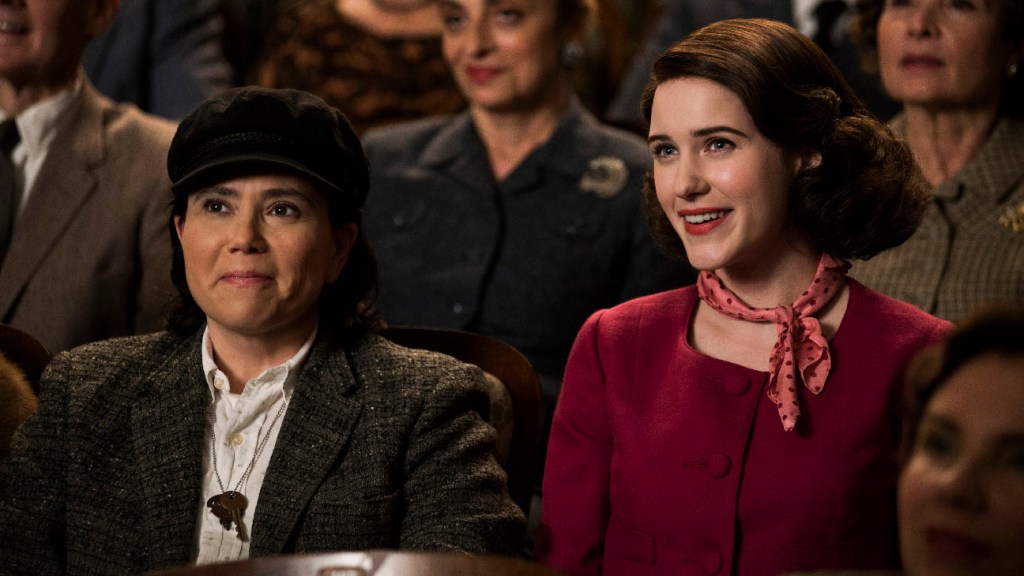 While not a native New Yorker, Brosnahan has spent a decade in the city and based her character’s distinct accent and ’50s cadence on people she’s known, overheard and researched.

“My Midge is inspired by a few different women I have known and loved in my life. I drew things from a few of them and did a lot of research about comedy at this time, New York at this time,” she says. “I looked toward comedians like Jean Carroll, who’s kind of a lesser-known comedian. She was the earliest example I could find of women in stand-up. I found stuff of hers as early as 1955. She was fabulous in this big dress with lots of petticoats and pearls, and she sings a little. It’s a little bit vaudevillian still. I looked toward women like Phyllis Diller and Joan Rivers and Moms Mabley.”

Then, of course, there were Don Rickles, Lenny Bruce (who figures prominently in Midge’s story), and other contemporaries.

“I really immersed myself in the comedy scene of this time. I think the voice and cadence came naturally from all the places I was drawing inspiration, and also from spending a lot of time sitting down with Amy,” Brosnahan says. “We were very fortunate to have a lot of rehearsal before we shot this pilot, which is a rarity in film and television. She listened to me ask her 12 gazillion questions and was very generous and patient with me and told me a lot of stories and talked to me a lot about Midge. I learned so much from talking to Amy.”

This isn’t Brosnahan’s first breakout role — she was nominated for an Emmy for her part as call girl Rachel Posner on the first season of Netflix’s House of Cards — nor is it her first period piece; she played ’40s housewife Abby Isaacs on WGN America’s critically lauded Manhattan. But she’s still getting plenty of buzz for her breakout performance in Marvelous.

“It’s really different from anything I’ve ever done. It’s thrilling to me that people feel like this is a breakout. If I could constantly break out for the rest of my life and career, I’d be thrilled,” she says. “This is scary for me. This is something I’ve never done before and never even thought I would do. I feel so lucky that someone gave me the opportunity to do it. I’m just thrilled and honored and feel so grateful that people have responded to it so positively. If that’s the way it was going to be forever, I’d be fine with that. That’s what I love about being an actor. I want to be a chameleon. So if people are feeling that’s true and continuing to give me the opportunity to challenge myself, that’s when I feel most creatively fulfilled.”

The Marvelous Mrs. Maisel will be available to stream on Amazon beginning Wednesday, Nov. 29.