Everybody experiences the feeling of truly believing their parents are evil at some point in their life. (No? Just me?) But in the case of the newest Marvel superheroes, those hunches aren’t far-fetched flights of fancy — their parents really are evil, and it’s time to do something about it.

The upcoming Hulu TV series Marvel’s Runaways, based on the beloved comic book series of the same name, finds its way online Nov. 21, premiering the first three episodes at once. From veteran producers and showrunners Josh Schwartz and Stephanie Savage, Runaways promises to bring its creators’ sensibilities from The O.C. and Gossip Girl to bear upon the world of the Marvel Cinematic Universe, by way of six teenagers — once friends, now completely estranged from one another — to band together to stop their parents from unleashing unspeakable evil upon the world.

Hulu's 'Runaways' "Lives in the Same World" as Other Marvel Fare

Marvel's 'Runaways,' From 'The O.C.' Creators, Ordered to Series at Hulu

In anticipation of the season premiere, Hulu has unveiled a brand new two-minute trailer, providing the best look at Runaways yet — including the various power sets the individual Runaways bring to the table. Read on for a closer look at what the trailer reveals about each character. 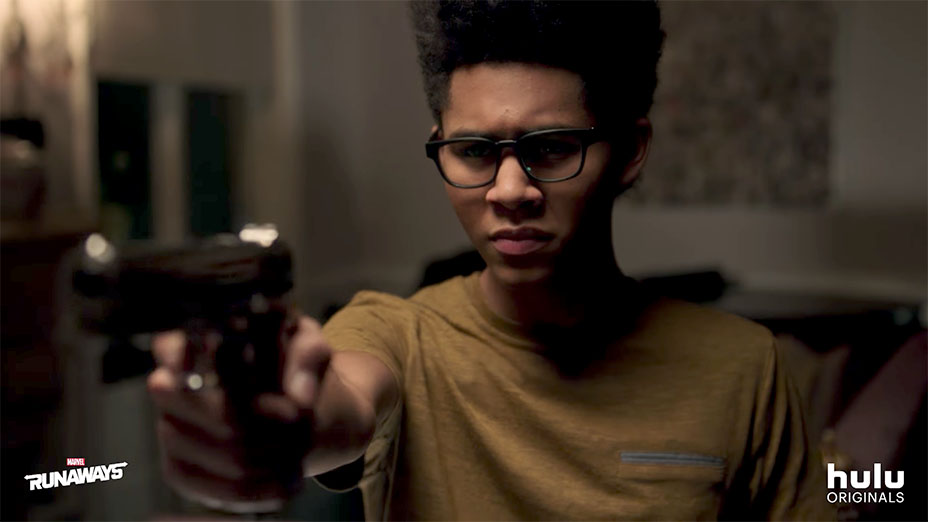 The de facto leader of the group, Alex is the one who’s most eager to reunite his old friends, despite the fact that everyone’s grown so distant over the years as they burst into young adulthood. The image of him wielding a gun here showcases his potent fury, as well as his fierce dedication to the cause he believes in. 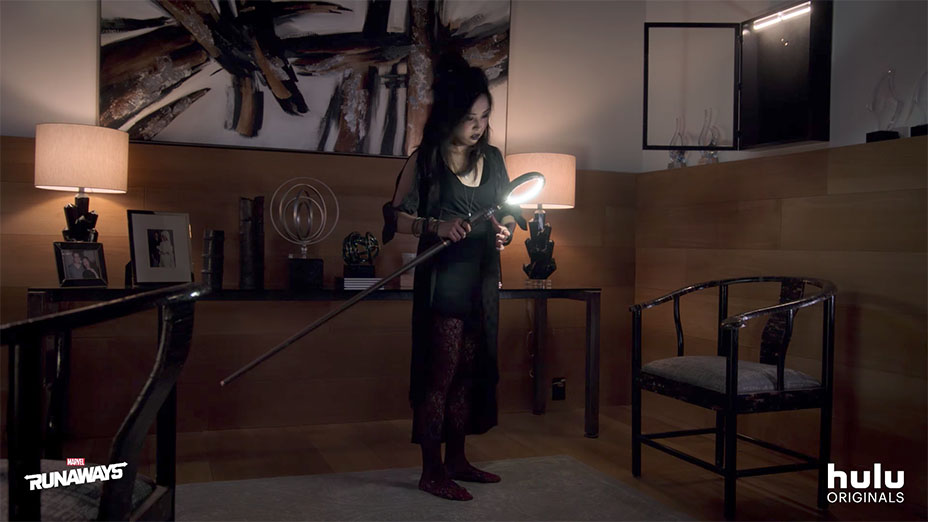 The magically inclined member of the group, Nico is a practicing Wiccan who gets a powerful upgrade in the form of the Staff of One, featured in this image. This ancient weapon, which Nico summons from within her own body through bloody means, can be used to cast a variety of spells — though she can never cast the same spell more than once. It helps that Nico is a creative thinker. 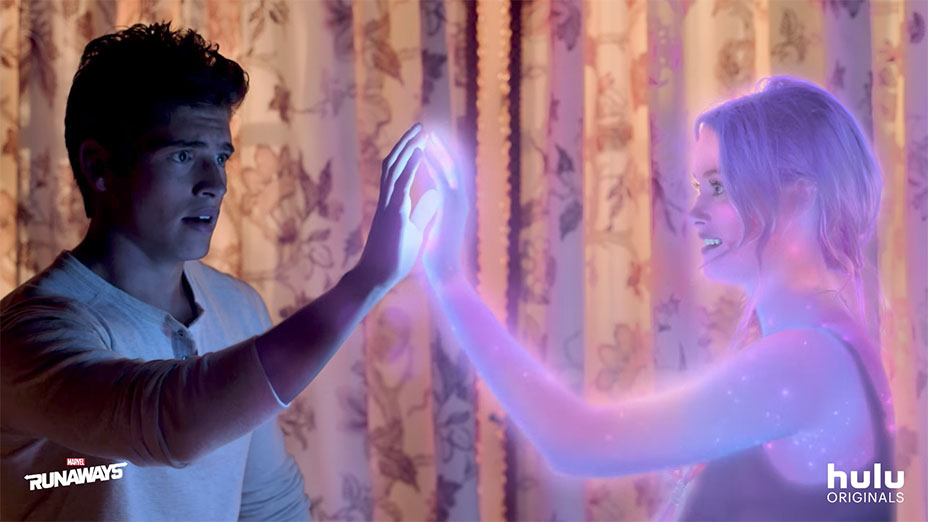 The popular and pampered Karolina looks like she has everything she could ever want — until it becomes clear that there’s much more than meets the eye when it comes to her secret origin as an alien. In the comics, she hails from a race known as the Majesdanians, who derive their powers from absorbing solar energy. The first glimpse at an alien Karolina in the trailer more than lines up with the character’s aesthetic from the comics. 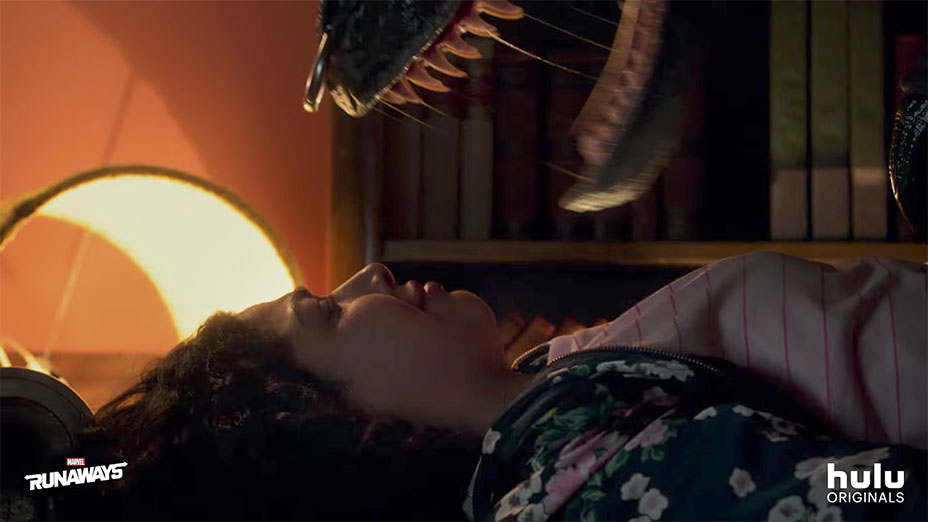 Your eyes do not deceive you: that is indeed a dinosaur’s maw hovering in the middle of the image above, an artifact of future genetic engineering who comes to be known as Old Lace. She’s a lot friendlier than she looks, at least when she’s in league with Gertrude Yorkes, the young woman she was designed to protect and obey. That’s right: the Runaways have a psionically powered dinosaur on their side. Eat your hearts out, Avengers! 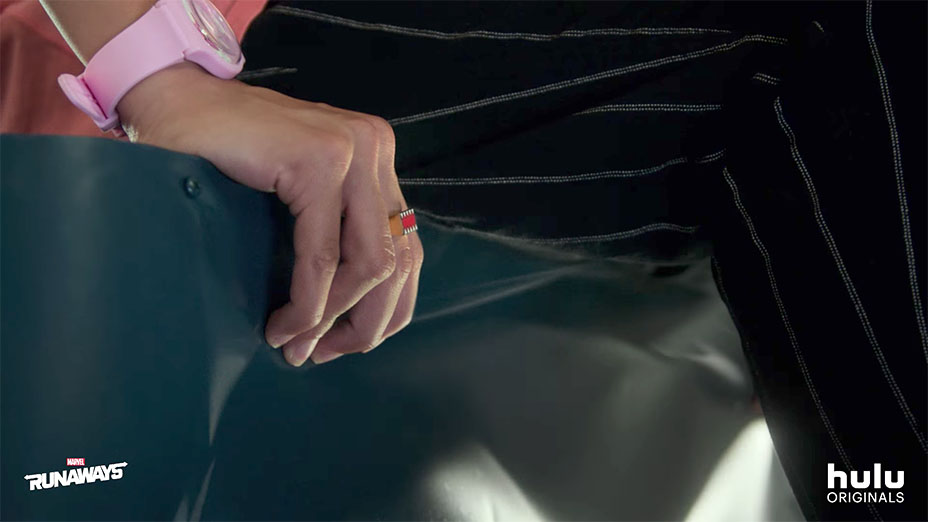 The biggest change-up from the comics to the TV series, as far as we currently know: Molly, formerly known from the comics as Molly Hayes, now known for the sake of the show as Molly Hernandez. Originally conceived as the youngest member of the Runaways by several years, not to mention the strongest member of the group thanks to her powers as a mutant, Molly has been modified for the show to be both a little bit older (though still younger than the rest of her peers), and the mutant origin has been changed due to rights issues. Even if she’s no longer going by the code name “Princess Powerful,” Molly still packs a heck of a punch, based on the fact that she’s making short work of a metal canister in the trailer. 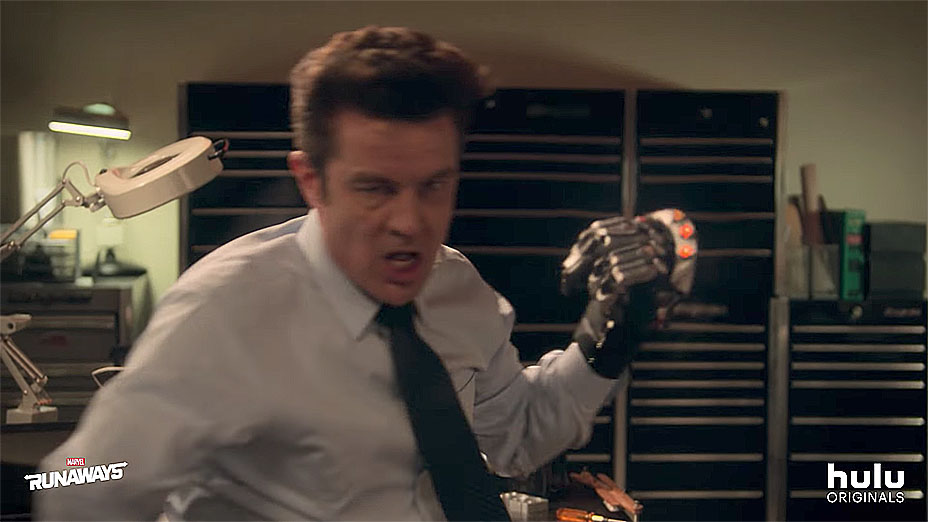 The man in the image above is not Chase Stein. This is his father, Victor Stein, played by Buffy the Vampire Slayer fan-favorite James Marsters, one of the evil members of the Pride, the super-villain parents of the Runaways. The reason it’s more important to look at Victor here than Chase (who you can see standing opposite Karolina in her moment of alien discovery) is that he’s boasting a set of gloves known as the Fistigons: awesomely named gauntlets with fiery capabilities. Sure, Victor has his hands on those hand-enhancers now — but it won’t be long before Chase inherits his father’s power.

Pretty much since the successful rise of the Marvel Studios brand, rumors of a Runaways feature film or television series have been floating out in the ether. Indeed, a movie was in development as early as May 2008, the same time Iron Man burst onto the scene. Several failed attempts and false starts later, and here we are: less than a month away from seeing the Runaways team together on screen, and already at the point where we can see them united in a single live-action image, seen at the end of the trailer below:

For anyone even casually interested in scoping out a light-hearted superhero comic book adventure, look no further than Brian K. Vaughan’s original Runaways run — though be warned, it’s guaranteed to contain some spoilers about what’s ahead in the Hulu series. Maybe it’s best to engage once the season airs in its entirety.

Marvel’s Runaways arrives on Nov. 21. Let us know what you think of the new trailer in the comments.