[This story contains spoilers from the third week of Fox’s The Masked Singer season two.]

Why do a show like The Masked Singer? “I don’t know that I have a good answer for that,” the latest celebrity to be booted from the Fox reality competition told The Hollywood Reporter the morning before his episode was set to air.

Dr. Drew Pinsky was unmasked as the Eagle in the third week of the show’s second season, in the final introductory episode that saw stars dressed as the Flower, the Penguin, the Fox and the Eagle (Pinsky) sing for judges Nicole Scherzinger, Robin Thicke, Ken Jeong and Jenny McCarthy.

Below, the radio host chats with THR about his singing career that never was, making his son sign an NDA and messing with friends Jeong and McCarthy.

What kind of singing experience did you have before getting on the Masked Singer stage?

I used to sing when I was a kid and for five minutes when I was in college. I thought I would do the Met opera auditions and go to West Germany and all this stuff. And I very wisely took a turn into very different direction. But I saw the show last season and I was just thinking, “I should do that show.” I know Ken and Jenny very well over many years and I thought this would just screw with them. It’d be so funny. It’d be interesting. I’m losing my voice as I’m aging and I don’t have much more opportunity to use it, so I thought this would be perfect. I literally just told my agent, “You should put me on that show.” And that was that. I was on.

What was your reaction to the judges’ guesses?

They are close in weird ways, but a million miles off in general.

Were you happy with your performance?

You know, I was not bad. I was good. I did what I needed to do. I felt after the entire day, which is one day of performing and then getting revealed and all this stuff, I thought, “Mission accomplished.” I went, did exactly what I wanted to do, had the exact impact I wanted on Jenny and Ken, and the only thing was it’s so fun you wish you could stay. That’s the worst part. And I knew I was vulnerable in the smackdown. I knew I did not have the goods for that. So when I didn’t make it through the first round, I thought that’s it. I called my team and I just said, “Look, this has been a great experience. Don’t feel bad.” They’re like, “No, no, you’re going through. Don’t worry about it.” I go, “I don’t think so.”

Everyone who’s left so far this season hasn’t been bad, it’s just been a combination of luck and going up against someone crazy good.

I totally agree with you. It was an extraordinary season. And now, seeing all the performances that I’ve seen so far, you know more than I do. I’ve been watching it as it happens. My wife keeps laughing at me, going, “Look who you were up against. You weren’t going to last long no matter what.” It’s a really exceptional field. It’s great for the show.

It’s so funny, I had two distinct feelings. One was exactly what Terry Bradshaw expressed last year, which was, “Thank you for voting me off. This is really stressful. Thank you for getting me off of this thing.” Number one. And then Laila Ali said, “Hey, I’m not used to losing. I’m a champion. This is really uncomfortable.” And yeah, there’s this real feeling like, “No, I don’t want to lose. I want to stay around. But thank you for getting me out of here because this is too stressful. This is too crazy.” 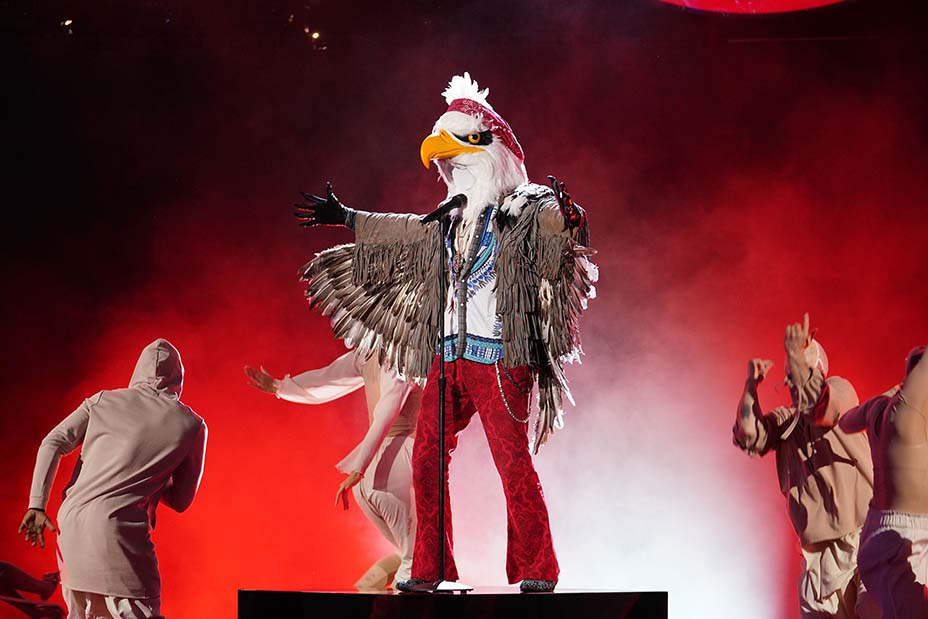 Well, in season one, Gladys Knight didn’t win. So you’re in good company.

Again, the stuff my wife keeps telling me. Like, “What did you sing? Gladys Knight didn’t win last year. You think you’re going to beat her? Give me a break.” But I’ll tell you what, it’s not the feeling, “Oh, I’m going to win this thing.” I never had that delusion. It’s just it really is a fun production, probably the most fun. It’s very serious. It’s very intense. But it’s the most fun — they pull it off in such a way that it’s one of the most fun things I’ve ever done.

How difficult was it to keep secret?

It’s awful. It’s beyond. My wife and I were watching this together and last week Nick Cannon said, “Yeah, you spent all this time and energy stressing yourself out and lying to your family for three months.” And we thought, “Oh, my God, he’s so right.” You have to lie to everybody. It’s not comfortable. My one son is living with us and I had a vocal coach come in twice a week, sometimes three times a week because I have a vocal injury. I have a problem with my vocal cords. Like I said, I’m losing my voice as I age and I had to go see an ear, nose and throat doctor. When I started singing in preparation for the show, I realized the mid-range of my voice was just gone.

And I was like, “Uh-oh, something’s not right.” And lo and behold, I’ve got this thing on my cords and to fix it, they’d have to do a laser and vocal rest for like four weeks. I do a radio show every day, I can’t do that. Not only that, the show was four weeks away and I couldn’t do a laser on my throat in preparation for that. So we did all these other things to get me through it, including having these vocal rehab people [come to my home]. The voice coaches from the team there are really good. I started working with them in June to try to rehab my cords. But because of that, there was somebody coming into our house at three days a week. We had to tell my son and have him sign a nondisclosure.

He’s a triplet; the other two kids we couldn’t tell them. The other two we are lying to. We were watching TV with one of my sons, like, two weeks ago and an advertisement came up where I was on the advertisement and my wife goes, “Look,” and my one son perked up and he goes, “What, you’re thinking about doing that show?” And were like, “Oh, no, no, no, no, not at all.” But we’re inviting him over for dinner tonight and we’re going to just play the show while we’re eating and see what happens.

What were your initial thoughts when you first met with the costume team and they showed you their ideas? What kind of input did you have?

Okay, so here’s what happened: You have a call in June. We filmed in July or something, and you get a call like two months earlier from a producer asking you, “What are you thinking?” I had an Eagle already in my head. And the producer goes, “We’re thinking about the Eagle for you.” I went, “Oh, my God, that’s what’s in my head.” And mostly because the only thing I do these days is I sing the National Anthem at sporting events, like for the Dodgers and Kings and stuff. And so I thought, “Well, I could do something patriotic and be the bald eagle.” And so that’s what was in my head. They said, “Eagle,” we said, “Great.” We immediately all agreed that was the right thing to do. Then you go and you start having your costume fittings. The costume people do their own thing. They really create a character. They’re geniuses.

I put that thing on for the first time. I was preparing Michael Buble songs and Frank Sinatra songs and “God Bless the USA” and things like that, and I put this damn costume on and I immediately said to everybody, “We have to go in a totally different direction. This is a rock ‘n’ roll Eagle. This is not what I expected. But I feel it, I get it, and we have to really work on rock songs.” The next song I was going to do had I gone through was “Pour Some Sugar on Me.” I mean, we were going full rock with this eagle, which was completely different than what I was anticipating.

Well, at least you have another song in your pocket for karaoke.

I have like eight other songs in my pocket now for karaoke because I learned a ton of them. One I thought would work was “Bohemian Rhapsody.” I was pushing them to let me do that, and then we came up with the Meatloaf song and that worked pretty well. But then the next one was going to be “Pour Some Sugar on Me.” That’s such an intense song. I called my team in during the day that we were filming. I said, “I’m not sure, that may be too much, but let’s see how the day goes.”

Who are you rooting for now?

Well, the Leopard, because we all thought that was going to be a female and it’s a male with not just an exceptional voice, but exceptional musical ability. I’m very interested in seeing who that is. But I’m going to tell you what, the Flower, who I’m up against, you’re going to like that one.

Sounds fun! The show brings a lot of joy to people.

It’s a joyful show and I’m kind of living proof. I mean, it’s so antithetical to everything I’ve done and who I am. But even I can climb in there and have a good time. It’s fun for everybody. It really is. It’s fun for us doing it. It’s fun watching. I love screwing with the judges. I love doing that. My only thing was not being able to hang out more with them. I wish they would have some kind of wrap party where everybody got together, the production team and the performers, because we never saw each other. I still don’t know who anybody is!

The Masked Singer airs Wednesdays at 8 p.m. ET/PT on Fox.

'The Masked Singer': Who Was Under the Panda Mask?