[This story contains the identity of the winner of Fox’s The Masked Singer.]

Three celebrities remained in the competition heading into Wednesday’s finale of Fox’s surprise reality hit The Masked Singer: the Bee, the Monster and the Peacock. And while the celebrity judges managed to guess the identities of some of the contestants early in the season, they were stumped by the Monster throughout. Ultimately, that mystery — combined with plenty of excellent performances — tipped the competition in his favor and Monster was crowned the winner.

Monster, aka singer-rapper T-Pain, beat out Bee (Gladys Knight) and Peacock (Donny Osmond) to become the first-ever winner of Fox’s The Masked Singer. The star spoke with The Hollywood Reporter about his journey on the show, which judge he thought would guess his identity first and his airplane run-in with fellow competitor Joey Fatone (aka Rabbit).

How hard has it been to keep this a secret?

Not too difficult. Between family and friends and stuff like that it hasn’t been too difficult. But just the internet every week and you see your Twitter blowing up every time the show comes on. I may not be able to watch the show and a lot of people were spoiling it for me because I didn’t know who anybody was at the time. That part was difficult, but with friends, I’m pretty good at not telling them shit about anything.

How does it feel to have won this whole thing? You didn’t even know what it was really going to be when you signed on for it.

There’s a lot of different emotions going on. I feel like a weight’s been lifted off my shoulders from having to keep that secret for that long. Suck it everybody who told me I couldn’t sing! I just won a singing competition! There’s nothing else you can tell me. It feels like I’m the king of the castle.

(Laughs) I mean, she’s still doing her thing. She was amazing the whole time and if it was up to me, I definitely would have let her win. No question. That’s somebody I look up to. Nobody wants to beat Gladys Knight at anything! I’d let her win a video game.

As a viewer, one of the fun parts about watching the show was that everyone had guesses as it went on, but it was still really thrilling every week to see what everyone was doing. Was it like that for you?

It was cool because much as much as I thought I was going to be off the first episode. So it didn’t wreck my nerves as much as everybody else’s, but for some reason as they were like trying to guess who I was behind the mask, I was really nervous. I don’t know why. It’s like that feeling you get when you used to hide from your mom in the clothing store. It wasn’t like an, “Oh, God,” it was like, “They’re getting closer!” but then they weren’t close at all. It was a weird feeling. I thought I had the most distinct voice out of everybody, so I thought I was going to be gone the first episode, but I guess not. 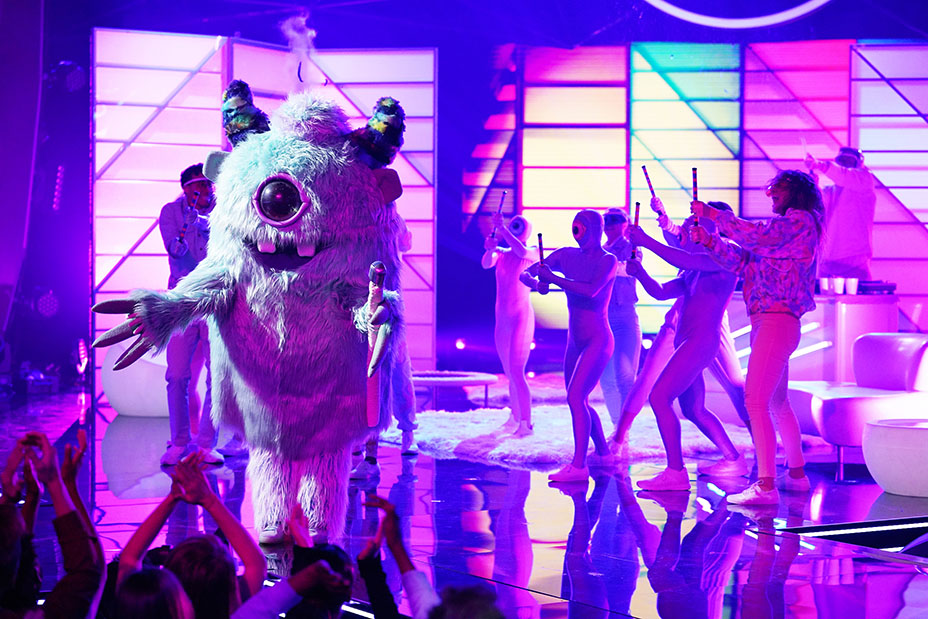 Because people associate you with Auto-Tune, maybe they just didn’t necessarily realize that it was you singing. Is that part of the reason you wanted to do the show in the first place?

I wanted to do the show in the first place because it sounded so silly and I just need something to laugh at, so it was pretty cool. I always take opportunities to put on costumes or things like that, especially if I’m getting paid for it. That’s always cool. But any opportunity I get to put on something as silly as that costume was, I’m taking it.

How does it feel now that people are thinking, “Wow, this guy is an incredible singer, maybe we underestimated him this whole time?”

I get my “I told you so” moment. But other than that, it’s pretty normal to me because I already knew this. These were campaigns that I was doing. I went on a whole acoustic tour with no Auto-Tune and nothing backing me up and just a few pieces in a band and just raw singing and raw energy and small, intimate venues. I thought that proved the point to the world, but I guess not everybody can fit in those venues. It’s a great platform to get that out there.

'The Masked Singer': How the Fox Reality Show Scored Top Talent (and Kept It Secret)

What’s the best feedback you got from the judges?

Anytime they said, “Oh, my God, his voice is amazing.” Or, you know, “Whoever this is, he can really sing.” Anytime they said anything like that it obviously felt great.

One of the executive producers said that he thinks you might have had the most difficult costume to wear it because you were essentially in this sweat box for hours. What was that like?

I think I had on the only full body costume. Everybody else’s thing was kind of like, a mask and clothes and a few accessories. They could still move freely. I could only put my arms out in front of my body. I could only see straight forward. I had no peripheral vision, I had no depth perception or anything. And it was hell! I mainly picked it because I just wanted to look the silliest. I felt like if I was going to get voted off the first episode, I could at least have fun with it and get to wear this dope costume.

Your costume was so funny, especially in the episode where you sang “American Woman” and they made a little leather jacket.

Once I got past a few episodes I was like, “Yo, if I’m going to be here for this long, I’m going to make this thing sillier every week.” Then it just spiraled out of control. But it was really good.

It was so funny. Switching gears, the secrecy involved in keeping everyone covered at all times, including your guests — what was that experience like for you?

It was more of an annoyance than it was difficult or anything. We couldn’t talk. They didn’t allow us to talk to anybody, just to make sure our speaking voices didn’t give away our identity. We couldn’t leave our hotel rooms without full body coverage and something over our face. They appointed entire uniforms for all the contestants. It was more of an annoyance trying to keep up with that one mask and wearing a particular hoodie that said, “Don’t talk to me.” You’re covering up your legs, you’ve got pants under your pants so none of your ankle was sticking out, you’ve got to keep your hands in your pockets until you get into your dressing room. It was so much every morning that I had to wake up an hour earlier than I normally would just to get all this stuff together.

The contestants didn’t get to talk to each other, but have you talked to anyone since?

Yes! Right after we got through filming I was on the same flight as Joey Fatone, and we talked about it a little bit. It was pretty funny. We didn’t talk too much about it because we both have podcasts now, so we were both, like, “Let’s just talk about it on the podcast.” But when he saw me and I saw him, we still didn’t know for sure if it was us in the masks because we didn’t know who else was on the show. And even when people get revealed, we don’t get to know that. We don’t get to see it. There’s no live feed in our dressing room, so we don’t get to see what they’re doing out there. We just hear a bunch of screaming from the crowd. We didn’t know it at first, so we just kind of stared at each other for a while from across the airport. And then once we got on the plane and he was like, “Congratulations,” and I was like, “Oh, that was you. OK, cool. Thank you.”

The clues each week had to give enough information that it would help people figure it out, but maybe not so much that people could guess right away. Was that hard?

The producers picked all the clues. They did a good job on picking the clues. They just may have made it too easy. A lot of people got found out pretty fast. They were very good clues. I feel like they should have manipulated the voices a little bit more because all they did was pitch them up, and then people would just rip the video and pitch them back down and you can just hear all of our speaking voices.

People at home have Google, but the judges have their own knowledge. Were you amused by any of their guesses for you?

Tour time! It’s touring time now. I’m doing the 1UP tour for about two months and just getting back out on the road and doing the part I love the most, which is just performing.

Would you perform anything you sang on the show?

Just not in a monster costume, probably.

Absolutely. It’ll be much easier to do. I’m going to actually be able move around and breathe.

What was the most fun or memorable part of this whole thing for you?

Probably the utter disbelief that I kept not getting kicked off the show. It was that feeling, that rush you get right before they announce who’s moving on and who’s getting off the show and who’s getting unmasked. That part was a rush. And just singing all those songs. I don’t get to sing those kinds of songs a lot in front of an audience of that size — or at all. I don’t sing Queen at my shows. It was just fun. I had to relearn a bunch of songs that I thought I knew. I thought I knew the lyrics of these songs — I did not. The process of making sure the performance was nice and then doing it with that damn costume on was probably the highlight of the whole thing.