After pouring all of their own life experiences into season one, Master of None co-creators Aziz Ansari and Alan Yang needed to take some time off to go do some living.

“We tried to live a little more and have some more personal experiences,” Yang explained to The Hollywood Reporter at the New York City premiere for season two on Thursday. Then they thought bigger. “We went to our friends on the show, such as Eric Wareheim and Lena Waithe, and we spoke with them about their lives and focused on episodes on their characters. Then we went even beyond that and started looking beyond ourselves and thinking about what life is like in New York City, what life is like in different time periods. And we infused the show with curiosity and empathy.”

A year and a half after launching, and picking up an Emmy for Ansari and Yang along the way, Master of None heads to Italy to begin its second season, now streaming in full on Netflix. Last season ended with Dev (Ansari) deciding to pursue his pasta-making dreams and move to Italy after breaking things off with Rachel (Noel Wells) in the finale. The story idea had Ansari moving to Italy for a couple of months, where he learned to speak Italian and make pasta, just as Dev does in the opener. “I just kept a notebook and jotted stuff down and we wrote the second season,” Ansari told THR.

'Master of None' Season 2: TV Review

Ansari was joined by his producer, director and co-star Eric Wareheim, who plays his best bud Arnold, and the first two episodes were a recreation of their vacation. The first is a cinematic, black-and-white neo-realist entrance into Dev’s new world in Modena, paying homage to Vittorio De Sica’s Bicycle Thieves. The second sees a visiting Arnold and Dev road-tripping to Arnold’s ex-girlfriend’s wedding at a villa in Tuscany, a nod to Antonioni’s La Notte.

“We took the vacation a year ago, six months before the season, and now we have a film time-capsule of our friendship,” Wareheim told THR. The episode results in his favorite of the season — involving a look-alike groom — and a re-creation of the pair getting stuck in one of the tiny, windy Italian side streets (“I have a little bit of claustrophobia from being such a big boy and I freaked out,” he says). The pair traveled to Italy twice to scout locations and eat their way through town and countryside, recreating their meals onscreen at eateries like the three-Michelin-starred Osteria Francescana. “We were just gluttons,” he added of their crazy food life while researching and returning to film for close to a month.

Italy also introduces viewers to Francesca (Alessandra Mastronardi), the married woman of the family Dev has been staying with and working for over the last three months. “The relationship that plays out is kind of a triangle,” teased Mastronardi, who is from Naples, to THR about the evolving relationship this season. “They are both thinking about what’s best for them so it’s a friendship that becomes something else and makes them question, ‘Who is the best one for me?'” 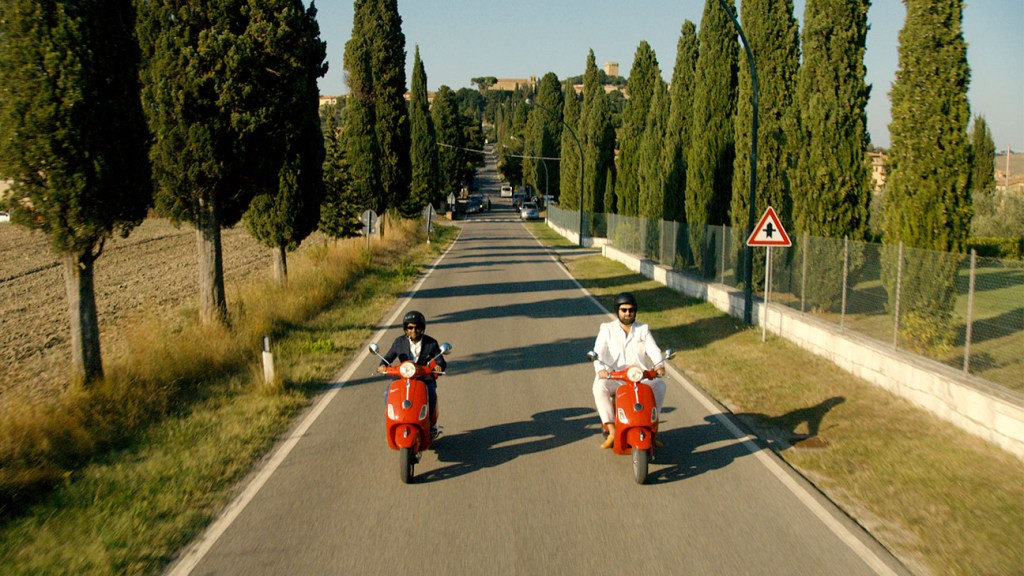 The rest of the season returns Dev and Arnold to New York to tackle a range of topics and other character stories. An episode titled “Religion” further explores the Muslim beliefs of Dev’s parents, played by Ansari’s real parents Shoukath and Fatima Ansari; Denise (Waithe) gets a flashback episode to tell her coming-out story; and Brian (Kelvin Yu) and his 70-year-old dad bond while both pursuing love, spurring talks of sex and race. Written ahead of the election, the show continues to remain topical through touching comedy — and food.

“I think the show is almost like a food show that has comedy in it, more than a comedy that has food in it,” Yu told THR of the episodes, which also include an hour dedicated to New York City. “It’s like Anthony Bourdain, where one episode is in Tahiti and the next episode is in Paris. They go right after it this season and they aren’t shy because they know they’re funny enough that they can keep it comedic at the end of the day.”

He continued, “Between seasons one and two of Master of None, the whole world turned upside down. There’s a lot of issues that are circulating that weren’t. This season talks about issues through comedy, which is so refreshing and much more palatable. When you can cut the tension with a love story or with a story about Cupcake Wars, it helps to go down easier and the medicine doesn’t feel so bitter.”

By expanding their source material, Yang and Ansari said they were able to continue to tell stories that are little told on TV.

“Anybody that is alive has an interesting story and we see so few of them onscreen,” said Ansari. “Even though there’s somewhat of an amount of diverse people getting shows, even amongst that, it’s still a certain group. It’s not a taxi driver or a doorman, so that’s why we did that episode.”

The episode Ansari is referring to is the sixth, “New York I Love You,” which explores the lives of everyday New Yorkers. “There are some risks taken in the second half of the season that I hope will surprise people,” teased Yang of the moment in the season. “We just want to reflect what our world looks like and what it looks like is pretty good. A bunch of us had lunch today and we all got along and there were no problems and there were all different races at the table, so that’s all we’re trying to get at. When we sit down and eat together, that’s all we want.”

Though Rachel’s return remains up in the air for viewers embarking on the second-season journey, fresh faces Bobby Cannavale and Angela Bassett join the cast, the latter making an appearance in Denise’s coming-out episode, which was co-written by Waithe and Ansari.

“I was sitting with the writers and Alan asked how I came out,” Waithe explained to THR of the genesis of the episode. “We got into this big dialogue about what that was like, how I grew up around a bunch of women and how it could be very difficult, but how my relationship with my mom evolved over time. It really ended up being a gift to me and to my story and to any person that’s ever come out, any person that’s ever had a best friend that’s lived with them throughout their whole life. It’s a beautiful piece of work.”

Revisiting that part of her life 10 years later was cathartic for Waithe, who just landed her own show on Showtime, The Chi. “I never thought when I was coming out that I would reenact it on TV. I wish that every person who has ever come out could have that experience. To step back 10 years later and be able to go, ‘Look how far I’ve come, look how scared I was. And look how chill I am about who I am now.'”

Both Waithe and Danielle Brooks, who plays Dev’s agent, credited the co-creating duo for the big swings they take this season.

“It’s really important people of color get opportunities to be a showrunner, creator and writer and get opportunities to be Emmy winners,” the Orange Is the New Black star told THR. “It’s important when it comes to moving us forward but also in telling stories that people might not necessarily know about. I hadn’t been able to see a lot of Indian families on TV and get to know about their culture, and that’s important to get an understanding of who we are as human beings. To see Lena Waithe’s character, Denise, this lesbian woman who is so in her skin and in her body and knows who she is. We get to see how she operates in society, which we don’t normally get to see.”

'Master of None' Co-Creator on Finding Comedy in Racism, Breaking Stereotypes

That expansion also results in a role that Yu says he never imagined for himself, referring to the dynamic that will be shown this season between Brian and his dad, who is based on Yang’s real-life father and sees Clem Cheung returning after starring in last season’s Emmy-winning episode “Parents.”

“I never envisioned I’d have that kind of onscreen relationship,” said Yu. “I just played the clever next-door neighbor, the jilted Asian repressed husband or something, so to have a father-son relationship on camera has been really special to me.”

Waithe summed it up: “That’s what I love so much about the show and about Aziz and Alan. They’re risk-takers. But they also have a vision.” 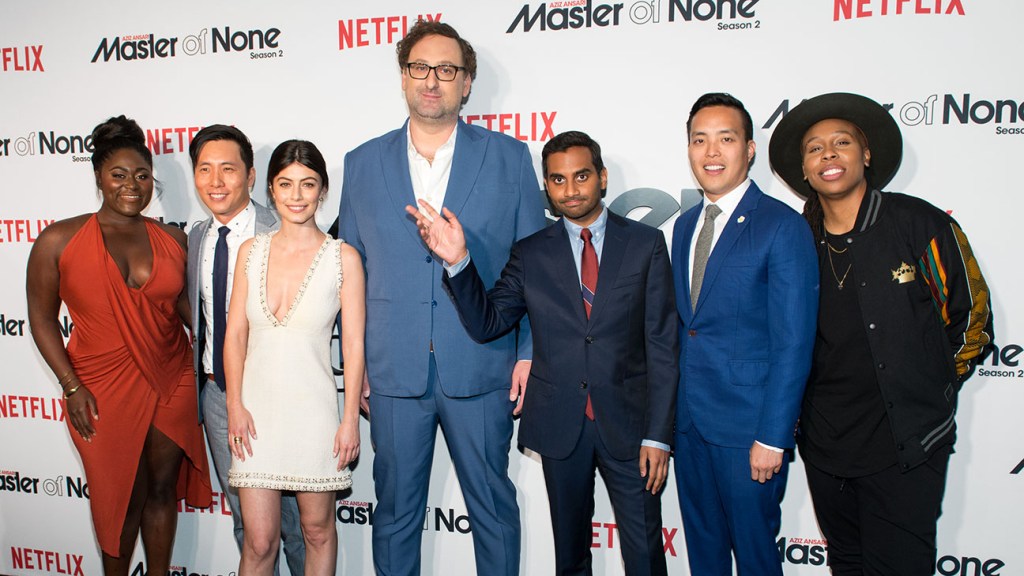 The second season of Master of None is streaming now on Netflix.

'Master of None' Season 2: TV Review