Maya Rudolph merits some praise. For the 2020 Emmys, she’s nominated for three performances — her voice work on Netflix’s Big Mouth as well as guest appearances on Saturday Night Live and The Good Place. But the current wave of congratulatory texts she’s receiving isn’t for any personal accomplishment; they’re all about Kamala Harris, Joe Biden’s vice presidential pick, who Rudolph happened to play during SNL’s most recent season — and seems likely to reprise leading up to the election. “People are happy about it,” she says. “And, you know, I’ll receive it for her.”

Just 24 hours after the news dropped, Rudolph was still processing what the big news means for her fall. She also spoke with THR about why she still doesn’t consider herself an impressionist, how SNL boss Lorne Michaels reached out to her the Veep selection and her new collaboration with viral video breakout Sarah Cooper (of Trump lip-sync fame) for an October Netflix special.

How have you been processing the news?
It’s really speaking to the Leo in me. I’m like, “Is it my birthday again?” My phone straight up and blew up yesterday. It’s pretty insane. And I think there’s a collective excitement about this. It’s a spot of positivity and hope and some good news, so it feels nice to be associated with that. But I also feel like such a lazy cheater, because I didn’t do anything. I’m not running. I don’t have to do anything but be the same fool I was. She’s doing all the hard work.

Have you heard from Lorne?
He sent me a GIF of myself, as Kamala, in sunglasses, sipping a cocktail and saying, “Oh no.” That really made me laugh.

So what do you know what this means for you on SNL? Being synonymous with a public figure can be quite the time commitment.
I’ve never really had to do that before! Over the years, I’ve had to watch people come back and forth, but I’ve never been in a position like Alec Baldwin — who doesn’t even work there but is there every week. I don’t know what this means. I don’t know what the hell is going to happen — nor does anybody else.

Are there any characteristics you noticed when you first set out to play her?
I’ve never thought of myself as an impressionist. I’m definitely that person who, when I’m telling a story, just automatically does the person’s voice. In that respect, I feel like I’m always listening to the way that people speak. It kind of stops there. I didn’t have a Kamala impression going into this. After a while, it was sort of like what happened with Tina Fey. There were enough people that said, “OK, you look like her. You’re going to get a call like any day now.” She’s got such an amazing personality and is so charismatic. That part’s really easy, because it’s fun to embody the joy of her.

Where did you start?
She’s kind of like a cool mom or like a fun aunt. She’s cool, but she’s also responsible. So what does that look like? I didn’t really know exactly how to do her, but I kept going back to the idea of those parents that are like, “You kids can smoke weed, but you have to do it at my house.” I’m not saying that’s Kamala! But that’s the feeling: cool but there are definitely rules at her house.

Why don’t you think of yourself as an impressionist?
I know that sounds silly, because I’ve done it. It’s one of those things that becomes part of the experience of working at SNL. There are so many people to cover during the time that you’re there, that you have to just jump into anything that will work and anything that’s current. The best way can describe it is like the way that my son plays superheroes. There are some people you just do. I used to do Madonna growing up, because I wanted to be Madonna. When Fred [Armisen] and I used to do The Prince Show, he knew how do to Prince because he loves him. And I knew how to do Beyonce, because I love Beyonce. For me, I try to find the goofiest part of the person and the joy in them and kind of create a character. I don’t ever really want to play a person. I just want to play a character. It just gives you so much more freedom.

Have you ever met Kamala?
I’ve never even spoken to her, no. When we did her that first time on SNL, she wrote a great tweet saying, “That girl being played by Maya Rudolph on SNL? That girl was me.” It was really clever and great and, so I wrote her back. But I haven’t had the chance to meet her. I would love to.

It seems like an inevitability at this point.
Right?

In a world where we’re allowed to meet people again.
Yes! Every once in a while, I stop myself and go, “Wait a minute… there’s something else going on right now.”

What have you been working on? Can I assume a lot of voice work?
That’s what I’ve been doing all day, yeah. It’s been great because it’s something that’s still moving forward. It’s definitely been a blessing that people can work at home. And the production company I have [with Natasha Lyonne] is working with Sarah Cooper, so we’re in the midst of getting that ready for Netflix for October.

She’s been a real 2020 breakout.
Yeah. She was shared with me, just like everybody else. A friend sent one of her videos and we all just found it so cathartic. It’s kind of the only way to digest what we were hearing. It just feels like a great time for her to do a special right before the election. It was really refreshing for me, personally, to see this person that was more like me than who I usually see doing something like that — just for the sake of doing it. That was really where the funny lays in her great impression. It just feels really needed. 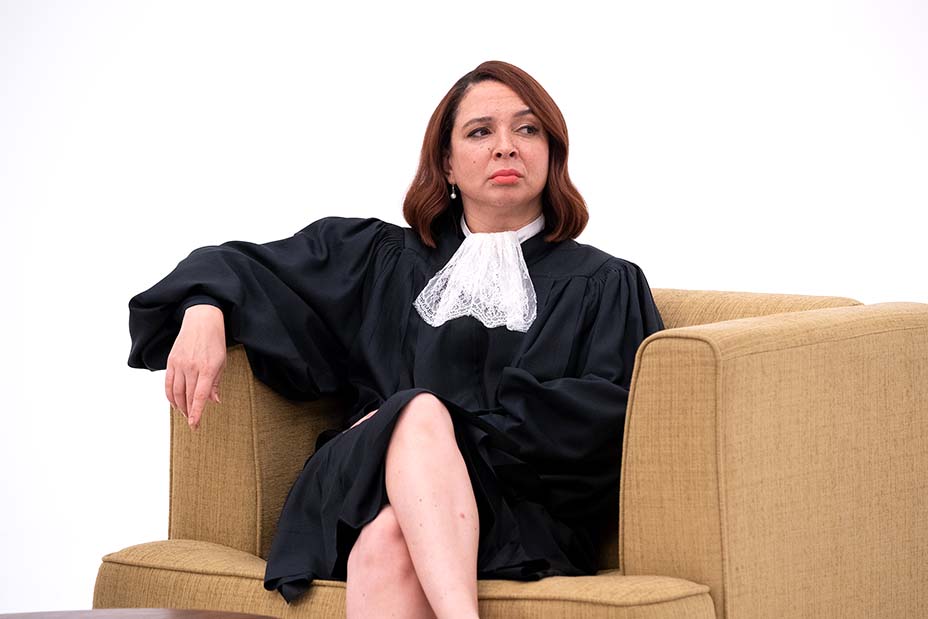 There’s a real specificity to her method that just feels very new.
That’s what I like about it. I’ve been really curious during quarantine about what’s going to come out of this time — the whole “necessity is the mother of invention” kind of idea thing. It got me to make sourdough bread until I realized that, oh God, this is the hardest thing I’ve done in years. It’s was going to be a while until I do that again. For Sarah, this was just something that she had to do and naturally happened out watching the news. I’m really refreshed by her.

Forgive me if you’ve been asked this a million times, but when did you first realize that people had really latched onto the way you say “bubble bath” on Big Mouth?
I had started noticing it a little, but then people turned it into a song and I started to see these little GIFs everywhere. Wait, I still don’t know if I’m saying it right. Is it a “GIF” or a “JIF?”

I believe, officially, it is a soft “G.” But, culturally, we’ve embraced a hard “G.”
Because there’s the website GIPHY, which makes me think they’re trying to make it sound like Jiffy peanut butter. Oh my God. It’s so exhausting. That doesn’t sound right. So it’s a “JIF?”

Technically, but maybe don’t say it that way.
Yeah, it just sounds lame. Like… hardware-y. Anyways, I noticed obsession when people started saying it back to my face and then I realized that there was more than one song. There was, like, a Jersey club mix or something. And then there was this amazing drag queen who performed to it dressed as Connie, the Hormone Monstress. That was amazing.

It was just announced you’re narrating Eater’s Guide the World on Hulu. Did you actually get to try any of the food?
No! There’s a lot of this stuff in New York, especially, that I haven’t done and would love to go. There’s this amazing taco truck in Astoria, but I guess it’ll be a while till I get there. All you want to do is eat everything that you’re seeing. I was so excited about that project, but what I should have demanded was, “I will do this, if you let me eat everything we’re talking about.”

When touring is a possibility again, will you be going out with Princess — your Prince cover band?
We were talking about maybe doing something before the election. That probably won’t happen now. When it feels safe to go outside, yes, for sure. I don’t have the desire for it at the moment, and I don’t think anybody else does.

Smash Mouth fans seem to not care.
I do not get that. I think bikers just want to go out. If it were Helen Reddy or Liberace, they’d still go.