[This story contains spoilers for episode six of FX’s Mayans MC, “Gato/Mis,” as well as spoilers through the fourth season of FX’s Sons of Anarchy.]

Moments after Mayans antagonist Miguel Galindo (Danny Pino) found himself locked up in border patrol custody, a brand new opponent entered the ring — one who previously loomed large on Sons of Anarchy.

Welcome back, Lincoln Potter, the assistant U.S. attorney played by Ray McKinnon, last seen in the FX biker universe during season four of Sons. McKinnon, whose other distinguished credits include playing Reverend Smith on HBO’s Deadwood and creating Sundance’s Rectify, returned to the role of A.U.S.A. Potter in the closing moments of Mayans MC‘s sixth episode, embarking on an eerie exchange with Ezekiel “EZ” Reyes (JD Pardo).

“Lovely night for a walk,” he purrs at EZ, as the Mayans protagonist strolls on, barely looking at the odd man standing outside the club’s Romero Brothers Scrap and Salvage scrapyard. (With that said, given EZ’s razor-sharp attention to detail and deep memory recall, one imagines him remembering Potter with ease at some point down the line.)

As EZ walks away, Potter picks up and cradles a cat, the two of them staring at the scrapyard. Potter then monologues as he holds and strokes the animal, like a Bond villain suddenly in the midst of a vulgarity-laden biker crime drama.

“Tell me, my wise feline friend,” Potter whispers in the cat’s ear. “You’ve roamed behind those rusty gates. What unspeakable truths lie twisted amongst the scrap, hm?”

With those eccentric words, the episode smashes to the Mayans logo, closing out the series’ sixth installment on an incredibly confusing note for the viewers who never watched Sons of Anarchy, and an equally exhilarating development for hardcore SoA fans. For the confused parties, behold, a quick Potter primer … 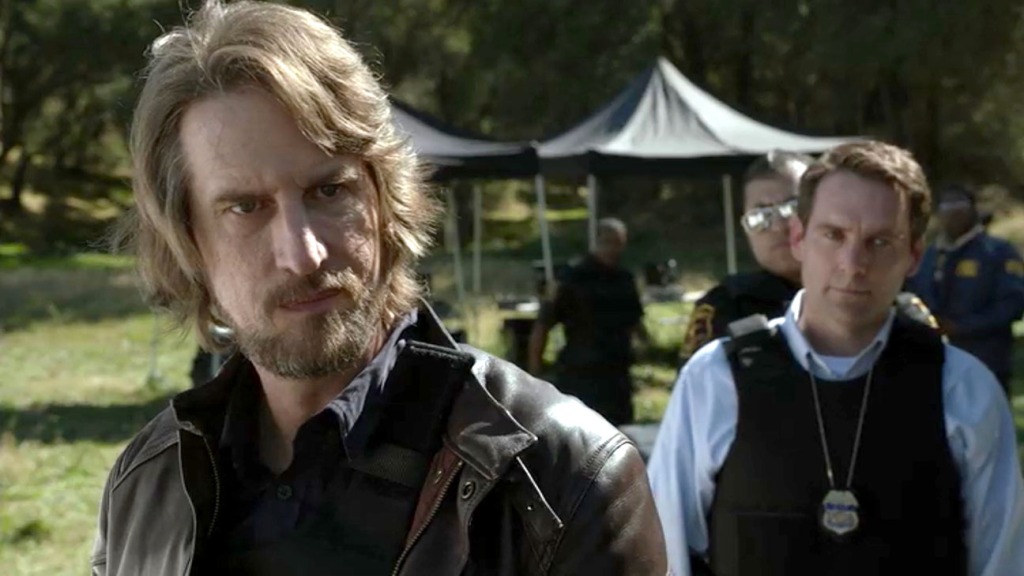 Lincoln Potter debuted in the fourth season of Sons of Anarchy, ruthlessly targeting Jax Teller (Charlie Hunnam) and the other members of the club. Unforgettably eccentric in tone and tactics, Potter was a formidable new foe at the exact time Sons needed one; his arrival came one season after the death of longtime series villain June Stahl (Ally Walker), assassinated in the closing moments of season three.

Over the course of the season, Potter played dirty in order to take on the Sons. For one example, he blackmailed one of the club’s members, Juice Ortiz (Theo Rossi), by threatening to reveal his African-American heritage to the rest of the Sons. The move eventually had devastating consequences for Juice and the club, leading to one of the show’s most tragic character arcs.

Perhaps the most telling character note about Potter comes in the form of his final interaction with Eli Roosevelt, the Sons of Anarchy sheriff played by Rockmond Dunbar. A slimmed-down version of that exchange:

Roosevelt: “You’re a really odd dude, man. You know that’s hard to get past, right?”

Potter: “I do. But it serves a purpose. I don’t really like people all that much.”

Beyond his interest in the Sons, Potter was also attempting to take down other criminal organizations with a RICO plan. Among the entities on his target list: the Galindo Cartel, the very same one at the center of Mayans MC. Just as Potter was about to pull the trigger on his RICO case, two members of the Galindo Cartel revealed themselves as CIA agents, forcing Potter to shut down the operation. With the operation ceased, Potter vacated the Sons of Anarchy scene, never seen again following the season four finale — until now, that is.

Why is Potter suddenly in the Mayans mix after all this time away? The Galindo connection certainly helps to explain things, as the Mayans are working directly with the cartel Potter once tried to take down. Whatever his current motive, expect it to further complicate the already deeply complex and fragile ecosystem at play within the club, as certain members (including EZ and his brother Angel, played by Clayton Cardenas) are working against their own brothers to take down Galindo, through a secret alliance with Mexican resistance fighters. (See? Complicated!)

The implications of Potter’s arrival are vast, not the least of which is the energy McKinnon as an actor brings to the proceedings. What’s more, it’s possible his return could signal a few other comebacks from the Sons of Anarchy world, including the two Galindo operatives he last crossed paths with: Romero “Romeo” Parada and Luis Torres, played by Danny Trejo and Benito Martinez, respectively. Perhaps Potter has a score to settle with these two old foes. After all, McKinnon’s misanthropic assistant U.S. attorney might be the type who lets “the bad guys” win the battle, but the war? Not so fast.