[This story contains spoilers for season one, episode two of FX’s Mayans MC, “Escorpion/Dzec,” as well as major spoilers from Kurt Sutter’s Sons of Anarchy.]

Months ago, actor Michael Ornstein received a text message from his old friend and colleague Kurt Sutter, asking if he was still living in Los Angeles, and if he was available to hop back into the Sons of Anarchy universe. One can only imagine the exact phrasing of Sutter’s inquiry, just as much as one hopes Ornstein’s reply was along the lines of his Sons character Chuck “Chucky” Marstein’s most frequently repeated saying: “I accept that.”

However the offer played out, the results speak for themselves. Midway through “Escorpion/Dzec,” the second installment of FX’s Mayans MC, Ornstein appeared in a blink-and-you’ll-miss-it capacity as Chucky, the artificially-fingered ex-con who served as the Sons of Anarchy Motorcycle Club’s bookkeeper and veritable mascot over the course of Sutter’s original biker drama. It’s a brief first look back at Chucky, often a source of comic relief in the midst of the SAMCRO drama, but also someone with his fair share of moving moments across six seasons of Sons. It’s far from the last look, too, as Chucky will continue appearing throughout Mayans MC, working in the front office of the scrapyard that hosts the Mayans’ Santo Padre chapter.

“Michael is one of my oldest and dearest friends, so I love having him around,” Sutter tells The Hollywood Reporter about bringing the beloved Sons of Anarchy figure back into the fold. As for why he tapped Chucky as the connective tissue between Sons and Mayans, Sutter, explains, “It was one of those things where you’re setting up the dynamics of the world and who are the players, and as you get into the episodes, you can expand those layers. I knew we had our clubhouse and the club itself is set in this scrapyard world where that’s their day job and that’s where the clubhouse is located … and I also knew there would have to be some sense of the reality of how that world operates. So, who are the external players in that world making it function? I remember thinking, ‘Well, I want to create a character who’s running the front office. Who’s my Chucky here?’ Then I went, “Well … maybe it’s Chucky!'”

Certainly, Chucky’s return is a surprise for Sons fans, but no one was more shocked at Sutter’s creative decision than Ornstein himself.

“It just made me think about Chucky in the sense that he’s sort of a hobo,” Ornstein tells THR with a big laugh, talking about his character’s enduring quality. “He’s a drifter, traveling around, and the thing about him is that he represents this blind love and loyalty to whoever gives him a place to be and a job and a reason to be there, to be part of the family. Once he’s in that place, he has this deep loyalty to that place. I just love that. It’s such an honor to play someone as pure as that.” 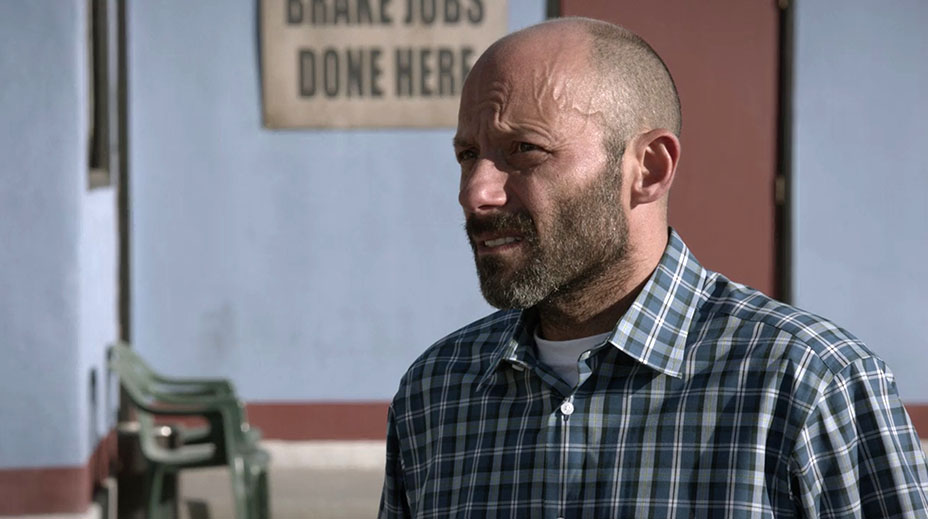 In order to tap back into Chucky yet also forge a new path forward into Mayans, Ornstein says he spent two hours by himself on the scrapyard set, as a means of bonding with the place: “I just wanted to really do everything from the inside out and understanding, like, how long he has been here? How did he get here?”

In that regard, Sutter says the way in which Chucky transferred from the SAMCRO clubhouse to the Santo Padre charter won’t receive too much elaboration: “There’s a reference to it. There’s this throwaway line that Coco has in episode six or something like that where we find out why [Chucky is] there. It’s just this thrown away thing and you realize, ‘Oh, my god. That’s why he’s there.’ But there’s never an exploration of it, an explanation of it. He’s just there, and in a very Chucky-esque way. Then you get a sense that he’s there creating new relationships.”

With that said, the status quo at the end of Sons of Anarchy certainly opens the door for Chucky’s new world order. By the time Sons ended, SAMCRO and the Mayans were close allies; simultaneously, Chucky lost the most important person in his life: Gemma (Katey Sagal), the Sons’ matriarch, and the person who often gave Chucky his sense of purpose. Even if it doesn’t play out on the show in vivid detail, Ornstein says Gemma’s death (as well as a few other losses) will add depth to Chucky, all these years later.

“I worked up a whole history with Chucky, where I don’t feel like he ever had any real kind of family,” Ornstein says “The way he survived through Sons of Anarchy, I feel that every loss that he suffered — with Otto [played by Kurt Sutter], who was really his only friend, and then with Gemma, and then preparing Jax’s chariot in the finale of Sons — to realize what he did there with that bike and that handshake and the way that ended up — and then to take it three years later, to where he is now. I feel like all of that history, he’s taking it with him into [Mayans], which makes everything more lush and more deep.”

“The loyalty that he feels now with this club, with these guys, with this environment is so much deeper, bringing that history along with him and that loss,” he adds. “What he has now, I feel like he’s much more fully formed, as a person, having gone through all of that.”

“As the season progresses,” Sutter says, “you get a sense that in the real time of that world, we’re playing it as it’s three years or so since the end of Sons. You get a sense that he’s in the process of acclimating to this new world and he’s approaching it in a very obscure Chucky kind of way.”

'Mayans MC,' 'Sons of Anarchy' and a History of Violence

What did you think of Chucky Marstein’s Mayans debut? Sound off in the comments and keep checking THR.com/LiveFeed for more coverage.