The director of Wednesday’s episode of ABC’s nostalgia-fueled, 1980s-set sitcom The Goldbergs has plenty of experience with pop culture’s hunger for nostalgia herself: actress Melissa Joan Hart.

The former Sabrina the Teenage Witch star has focused on directing since the end of her ABC Family sitcom Melissa & Joey, helming the Anjelica Huston-starring Lifetime movie remake of The Watcher in the Woods and the upcoming football-themed episode of The Goldbergs. Although the former child actress is still on the hunt for a new starring vehicle sitcom, she told The Hollywood Reporter that she’s making directing her focus for the time being.

Below, Hart talks about her new career trajectory, which of her past projects she’d like to reboot (think Clarissa Explains It All, not Sabrina the Teenage Witch) and what she really thinks of Netflix’s dark Sabrina-themed Riverdale companion.

Was directing an opportunity that you sought out? Is it something you’ve actively been trying to do?

I love directing. I started directing by default. Directing for Sabrina, I just was bossy and pushy. I knew my stuff, I paid attention. Clarissa was sort of like a mini film school for me. We had a lot of downtime on the set, and all I would do is explore. What does the lighting board do? How do you use the camera? What do you do with the boom? Watching the directors make their notes in the scripts, and why they made these specific notes. I would just be so curious. I was a really good student in school, and I got pulled out of school in order to do a TV show. I was still super curious. Here I was on a set with all this equipment and all these people doing things I didn’t understand. I just wanted them to teach me. I basically said to them, “Hey, what does that mean? What is this thing? What does this button do?”

That started it, but then with Sabrina, it was such a complicated show, and [new directors had] a big learning curve. We filmed a little movie every week. These episodes were 30-plus scenes per week. It wasn’t like a normal sitcom where it was 10 to 20 scenes, it was sometimes 40, 50 scenes a week. It was a complicated show to do, and we had these really experienced directors that would come on the set, and be like, “How do I do this again?” I’d be like, “Here, let me show you.” Eventually, after about a year or two, my mom, who produced the show, was like, “You know what? Here, we’ve got you a DGA card, go do it.”

I got to direct a bunch of Sabrina, and then it just sort of felt right. It was a more creative outlet for me. Acting, to me, has always felt like a piece of the puzzle, but directing is like telling the story, putting the pieces together, and really getting to be, at least for me, more creative. It was something I always explored, but never really had the time for.

Now, I’m able to focus on it, and it’s been wonderful. I like going back and forth, I really like the fact that I can direct, and then I like making people laugh. I’m still looking for that next sitcom. I love doing Christmas movies, and being able to jump back into my comedy roots. I have the best of both worlds, and it’s a little ying and yang. 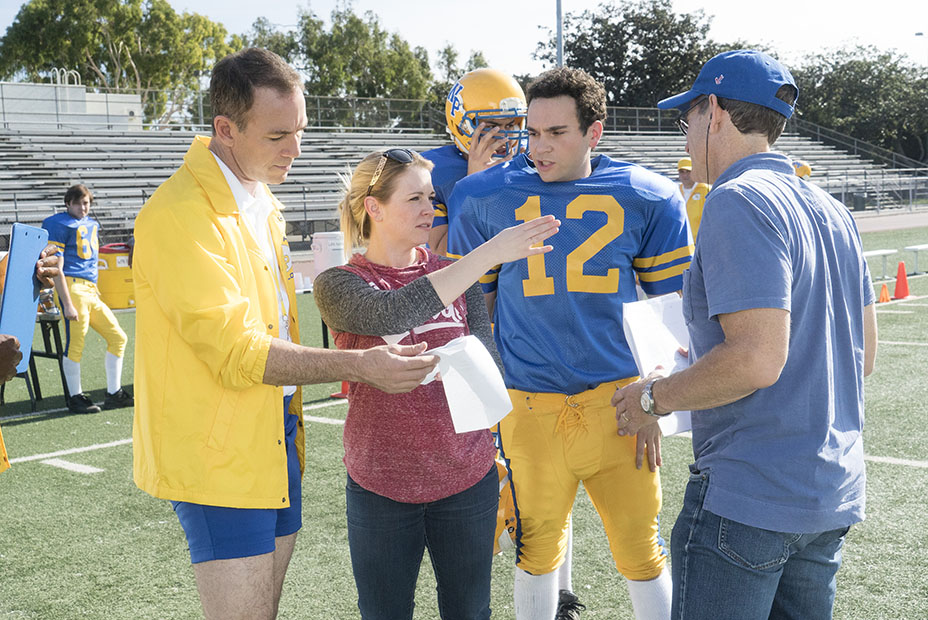 Are you seeking out more directing opportunities?

What happens in your Goldbergs episode?

[Creator Adam F. Goldberg’s] mother really did try her hand at making jackets. She made these really gaudy, amazingly tacky jackets. She took denim jackets and decided to stitch all kinds of doilies and whatnot on them. In this episode, [Beverly] tries her hand at QVC products, so that was super fun.

The episode is called “Hail Barry” and it’s about how Barry always said that he would be the quarterback of the Eagles if his mom hadn’t stopped him. In this case, because his mom’s so busy with QVC, he gets the chance to go try his hand at the football team. So it’s all about the beyond the chaos that ensues when he decides he’s going to join the football team.

The Goldbergs is a nostalgic show about the ‘80s, and for many people you’re closely associated with the ‘90s and 2000s. What do you think of all the nostalgia on TV these days?

I like it. I get it. With The Goldbergs, it’s totally different. I think it’s a fun ‘80s theme, almost like the way Wonder Years was. It’s really calling back that era that is a little far gone now. I think as far as the remakes, I think they’re getting a little crazy — but then again, that being said, I’m not above doing it myself.

What do you think of Netflix’s new dark Sabrina?

I think it’s a smart way to do it. If they wanted to try to redo it the way it was done, they’d have a lot of pushback. It’s nice to, if you’re going to do a reboot, make it different, and I think that’s what they’re doing.

That’s a loaded question. It really depends. It would depend on the project, the script. It would have to be really interesting. I just can’t imagine how they would bring me in. If the writers come up with a really brilliant way, and they approach me, I’ll definitely consider it, but I’m not expecting it.

Is there another project of yours that you wouldn’t mind seeing rebooted?

I like the way we left Sabrina. I think Sabrina ended on a really great note, and I don’t think you want to go back and explore that. At the same time, I think Clarissa ended on a note that could be explored again, because it didn’t really have an ending — it sort of ended.