Sarah Paulson won an Emmy, a Golden Globe and a Screen Actors Guild Award for her turn as prosecutor Marcia Clark in the scripted true crime saga The People v. O.J. Simpson. Now, Edie Falco is taking a page from Paulson’s playbook, wig and all, with her portrayal of real-life lawyer Leslie Abramson in NBC’s Law & Order True Crime: The Menendez Murders. The story centers on the infamous 1993 trial of Lyle and Erik Menendez, who were accused of brutally murdering their parents in Beverly Hills. Falco, 54, plays Abramson, who served as their defense lawyer. (The real Abramson declined to participate in the production, and Falco never met her.) In a late October interview with THR, the Sopranos and Nurse Jackie vet and mom of two spoke about moving to Los Angeles for the role and, yes, that hairpiece.

What reactions have you heard about your portrayal of Abramson?

There are a lot of comments about the wig. But a lot of the comments I’m getting are about how there’s all this stuff we didn’t know about. We thought we knew everything about it, but there was a great deal that we were not made aware of while it was going on. Which is kind of what we’d hoped.

How much did the wig and the clothes help you get into character?

The wig was helpful just because it makes me feel like not me and I need that to separate myself. From my standpoint, it’s more about the suggestion of what this woman looked like. There are certain similarities, but I thought it was important not to get caught up in that.

What appealed to you about the character?

She was a woman in a man’s world. She did not kowtow to anyone. She didn’t care what people thought of her, and she was not made to be less powerful than she actually was nor portray herself as less powerful so that people wouldn’t be intimidated by her. I think we all would like to feel like, were we in the same situation, we would be the same way, which may or may not be the case.

There’s got to be a ton of footage on YouTube of her from Court TV, so how did you decide how much to pull and what to pull?

I watch a lot of stuff and then at a certain point, I just stop. I just knew that it was no longer going to be helpful because I didn’t want to feel obligated to imitate the way she sounded and looked. It didn’t seem necessary. I just followed my instincts about it.

This is one of the first times you’ve played a character based on a real-life figure. Did you feel any extra pressure because of that?

Not really, because a lot of the testimonies that we’re using in the court scenes were legitimately her words, things that she had written. Some of it was from the imagination of the writers, like her home life. Based on the scant information they had, they had an idea of what that was like. But as far as the courtroom information, a lot of that was public record.

You worked with Dick Wolf before; one of your first recurring TV roles was on the original Law & Order in the early ‘90s. Do you remember at the time what it meant to get that part and work on that set?

I remember being grateful because it was a job in New York at a time when it was so hard to come by. And I certainly knew the show, and many of my friends had been on it. I didn’t meet Dick Wolf until some years later, but I did get to know a lot of his mainstay crew guys, many of whom I saw on this [project], so it was nice to know these people and have a teeny bit of history with them as we’re all going through this together. 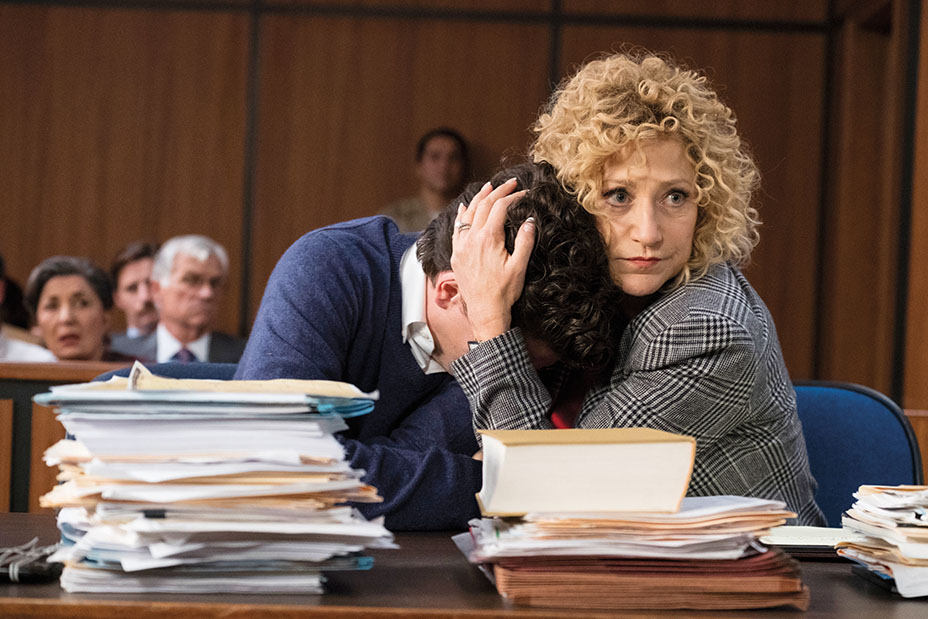 You had to move to Los Angeles for the first time for True Crime. Did you have any hesitation about making that move?

New York is where I live and I’m a bit of a homebody. But when this came along, I thought, “What would happen if I were to go out there for four months? If two of those months my kids could be with me because it was summer? What if I were to stretch my comfort level a little bit just for the heck of it?”

I liked it, I was actually surprised. There’s something about the nature that is all around L.A., the ease with which you can drive down a street and see giant trees and then you can go to the ocean and then you drive down Topanga Canyon and see some of the most beautiful landscapes. Places are just bigger, supermarkets have wider aisles — there’s just more space to live.

What kinds of roles are you being approached with nowadays?

It used to be that when a show ended, I would get a million more scripts that were like that. I got Italian mob wife for a very long time because people say, “I know who can do that!” And the casting people don’t often feel brave enough to venture outside of what they know will work. For a little while after Nurse Jackie, I got a lot of people with drug and alcohol problems, and that was not interesting to me. But it’s interesting and thrilling that a lot of stuff I’m getting offered now really is all over the map. People have always said, “Roles for women are hard to come by as you get older.” I can only speak from my experience, but it could not be further from that. Work has become more and more plentiful as I’ve gotten older. Also, the industry has changed. People are more interested in and have a greater appetite for seeing complicated people than ever before, and I love to think that people are also realizing that as people get older, their stories are more interesting, not less interesting.

What’s your take on the current conversation going on in Hollywood about sexual harassment?

There’s got to be more brave people who step forward and say, “I’m not going to work for you anymore if you continue to behave this way,” and they have to be willing to walk away. There’s got to be a culture where someone else can hire that person so that it’s OK to stand up for things that are important to you. It isn’t about being physically overpowered, it’s about being emotionally intimidated. It has to start with brave people coming forward and giving strength to the people a little less brave and moving the whole culture forward.