Michael B. Jordan has become a household name by playing larger-than-life heroes and villains like Adonis Johnson in Creed and Killmonger in Marvel’s Black Panther. But behind the scenes, Jordan plays a different kind of hero, one who uses the projects he makes, as both a producer and an actor, to create equal opportunities for marginalized communities in the entertainment industry.

Through his production company, Outlier Society, which he founded in 2016, Jordan, 32, is backing a range of inclusive stories centered on standout characters, including a super-powered black youth in Raising Dion; a civil rights lawyer attempting to free death row inmates in Just Mercy; and a man who clings to life after losing half his body fighting to protect his city in gen:LOCK.

'Succession' Showrunner Jesse Armstrong on Writing the Show Organically: "It's Mainly a Game of Trust, Rather Than Exquisite Planning"

An animated series (which debuted on Rooster Teeth’s website in January) that’s set in a dystopian future, gen:LOCK has Jordan voicing Julian Chase, a soldier for The Polity, the last stand between a great city and the invading Union forces. After he’s nearly killed in the line of duty, the remains of Chase’s body are reanimated and linked to a giant robotic suit so he can fight and help train an elite squadron of robot-infused soldiers to finally take down their enemy. Jordan, who grew up as a fan of anime, watching Dragon Ball Z as a kid in New Jersey, talks to THR about executive producing the series, his love of anime and Outlier Society’s work with the inclusion rider.

Anime had a huge impact on a generation of black children, particularly as Japanese shows like Sailor Moon and Dragon Ball Z began airing stateside. What attracted you to the genre as a kid?

I just grew up on it. I evolved from watching Saturday morning cartoons. Next, I discovered other forms of animation, Disney and Pixar. Then, of course, once the internet really got going, I was able to find animation from Japan. My passion just grew over the years, and I found myself being an avid anime fan.

What would you say drew you into anime? Was it the action sequences?

Action sequences? Yeah, for sure. I think the action and the story. A lot of the stories and the character development on these anime series are incredible. They are so underrated. I really dove into a lot of the emotional beats of these characters. I remember dropping a tear or two. I’ve definitely cried little man tears over anime before.

Dragon Ball Z‘s Goku can do that to you.

Not just Goku, though. I think I dropped a tear or two toward the end of the series. I can admit that.

At what point in gen:LOCK‘s development did you enter as executive producer?

For me, on this one, I came in a lot later than I normally would. A lot of it was already done. Animation takes years to do. This is something that Gray [Haddock, creator of gen:LOCK] has been working to perfect for a long time. So I was able to come in and put my touch on it. I really attacked my character and tried to elevate him. I made little tweaks here and there. But for the most part, a lot of the story and the nuances were already fully fleshed out. Gray did a great job of getting all that together. 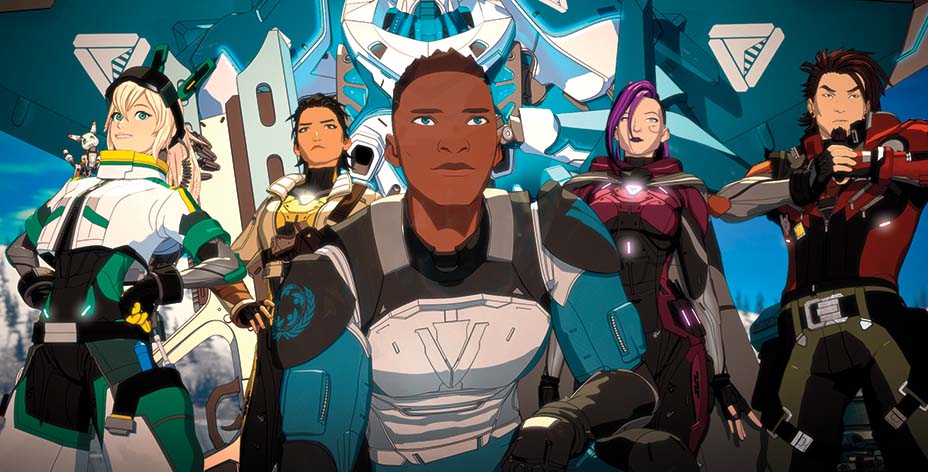 What does a Michael B. Jordan touch look like on gen:LOCK? What did you add that you were most proud of?

I guess mostly making Chase a culturally authentic person of color. It’s in the way he talks, it’s in his tone. I was working a lot with his character traits. There are so many moving pieces when it comes to animation. For me, a lot of what I was doing was focused on performance.

Your production company, Outlier Society, adopted a diversity inclusion rider. What provisions of that rider are you most excited to see enacted?

It’s an extensive document. For me, I think, it’s just making sure that underrepresented groups get a fair shot at every position, in every department. You will be considered. You will be up for the position. I want to be able to make sure that people from every underrepresented group have a spot in production — in front of the camera and behind the camera. So, that’s it, in a nutshell.