Michael C. Hall is back on TV — for a limited time.

After an extended small-screen sabbatical, the star of premium-cable fixtures Dexter and Six Feet Under has returned for Netflix’s eight-episode limited series Safe.

Created by author and TV writer-producer Harlan Coben (The Five), the series — which bows May 10 — centers on Tom (Hall), a widowed father who uncovers the dark underbelly of his upscale gated community when his eldest daughter goes missing. The role sees the Emmy-nominated actor going to typically dark places, albeit minus the strain of ghoulish wit (at least in its first two episodes) that characterizes his best-known work.

It has been nearly five years since Hall appeared as a series regular on television, a self-imposed break that allowed him more time to pursue roles both on stage (Lazarus, Hedwig and the Angry Inch) and in film (Kill Your Darlings, Christine). In the run-up to his new series (in which he plays a Brit), the actor spoke with The Hollywood Reporter about his self-described “Dexorcism,” what he learned from working with David Bowie and the chances viewers will ever see a spinoff of Showtime’s Dexter.

Why did Safe feel like the right show for you at this time?

I was interested in the challenge of playing an Englishman and the opportunity to play a relatively regular guy. I was interested in the fact that there was a definitive end in sight. We were going to do eight episodes, and that would be that. So it wasn’t an open-ended commitment to another TV show in that way. But ultimately, it was really just about the quality of the script. The fact that there were so many relationships going on. It felt like it was maybe three things at once. It felt like a character study, and it felt like a family drama, and it felt like a thriller. And I was excited by [the] aspiration to fuse those things.

You took a few years off from regular TV series work after Dexter ended. Did you just need a break? Because you did that and Six Feet Under back to back.

Yes, that was 13 straight seasons. I was interested in mixing it up. And maybe over the course of the subsequent four or five years that it has been since Dexter ended, playing more than one part. I’ve done several stage productions on Broadway, and then with Lazarus at New York Theatre Workshop in London. And I’ve done a few independent films, and now the TV stuff. I definitely had a desire to mix it up. I wasn’t ready to take an immediate third open-ended commitment to a television character. I certainly don’t rule that possibility out, but at the moment I’m enjoying bouncing around a bit more.

It seems like there’s something almost antithetical to being an artist in doing the same character over and over again, because as a creative person there’s this need to want to evolve and do different things. How did it feel to do the same two characters for so many years?

I did other things during that time. Things either onstage or independent films that obviously didn’t make as broad an impact. I didn’t feel like I was completely relegated to those two parts. That said, it goes both ways. Artistically speaking, I think it’s a unique opportunity, at least with certain things that exist in the current television landscape, to really go deep with a character. You evolve with someone over time in a way that you can’t if you’re doing a stage play or a film. There are ways in which doing something like that presents artistic opportunities that you can’t find elsewhere. But inevitably, if you spend that much time playing the same character, you’re going to get into ruts where you feel like you’re tilling dead soil, as it were. I wouldn’t wish any of it away, but having had that experience certainly kept me from wanting to jump right back in to something else that was long-term.

Safe is set in a very wealthy town in the U.K., and there’s a sense that some of these characters think that because of who they are in society, they’re above the law. Do you feel the show resonates with the times that we’re living in?

I don’t know if the characters feel above the law, but they certainly feel beyond the lawless. They live in this gated community, and they feel that whatever broader dangers that the media encourages them to be afraid of and take pains to avoid, it leads them to live in this gated community. The irony being that the insidious elements in the show emerge from within that community. The idea of the wall as a metaphor. Harlan is certainly not primarily a political writer, nor did he necessarily conceive of this when the wall was as loaded a metaphor as it might now be. But I don’t think that’s lost on anyone. We live in an environment in which a good portion of the media are fear and danger profiteers, you know? They’re in the business of keeping people afraid so that people will keep watching. They’ll feel that not watching whatever the media is offering will put them in danger, that they won’t know what to be afraid of, you know? So yeah, the show exists in that world, and that’s a dynamic that obviously goes beyond just culture in the U.S. It’s broader than that. We’re living in a world where we’re encouraged to be afraid of the “other.” And maybe it’s not quite the other that deserves to [be feared], as far as the story of this show goes. 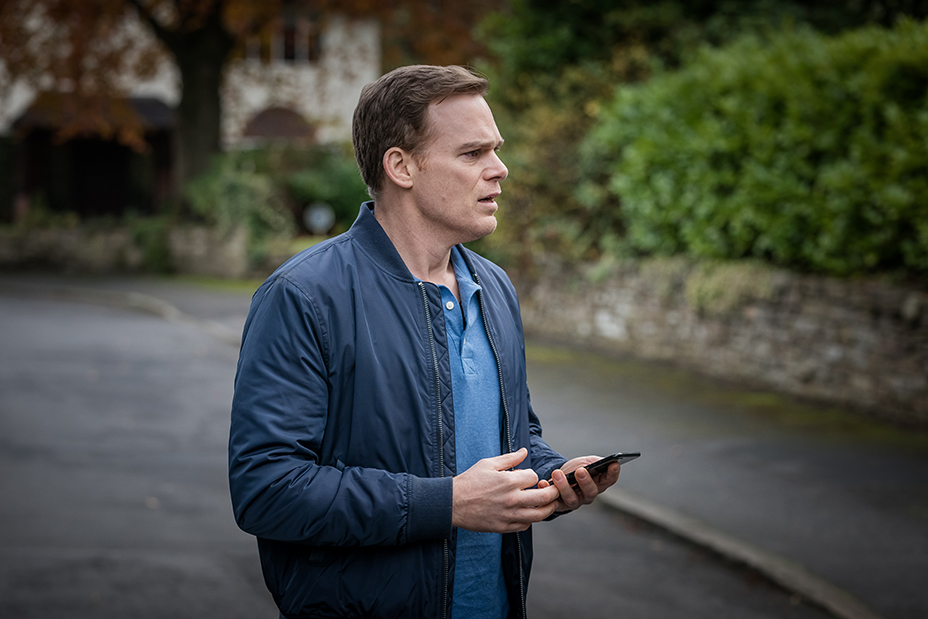 During the election, you had a lot of people saying “If Donald Trump wins the election, I’m leaving the U.S.” Did you consider staying in the U.K. permanently after he won?

I can’t say it didn’t maybe cross my mind. No matter who you support politically, the environment in the U.S. is so antagonistic. There’s a toxicity to that that I wasn’t looking forward to swimming in again. But at the same time, I am an American. I think it’s probably a symptom of a more general escapist impulse that people have. I certainly didn’t go to the U.K. because Trump was elected; I was actually in the U.K. when Trump was elected. There was maybe a part of me that was like, “Wow, I’m glad I’m not walking around Manhattan while everybody’s sort of zombified by the fact of the election.” But I’m glad to be back.

You took a “Dexorcism” after wrapping Showtime’s Dexter. That character was very dark. What was the psychological effect of playing him for so many seasons?

I’m not sure. I think Dexter at least initially was, in spite of what he was doing, lighthearted. I mean, he didn’t have the average relationship to what he was doing. For him, he was just doing what he needed to do. And it’s what made him feel better, not worse. As the show went on, he started to suffer more from the life he was living. It’s hard to say. II think that if you spend that much time preoccupied with whatever you were simulating, that a part of you is affected, and a part of you is recording the simulated experience in a way that is more than just fluff, you know? A part of you is absorbing it and marinating in it. It takes some time to get it out of your system and to unlearn whatever increasingly ingrained reflexive behavior results from doing something for that long. It’s hard to sort of point to specific things. But I certainly know now that I feel a lot farther from the character than I did two months after it ended.

There have been a lot of rumors swirling for many years about a possible follow-up to the show. Do you have anything new to report on that?

No. It seems like every time I’m asked about that formally and I don’t definitively say “absolutely not,” that it turns into some sort of more embroidered speculation about a new show. There are no plans in the works to make more Dexter. I don’t say absolutely not, never, because who knows if somebody might come up with something that feels worth doing. But it’s not something that I’m preoccupied with, considering or thinking about at the moment.

There’s a reboots/revivals/spinoff trend happening on TV right now. How do you feel about all these old series coming back? Does going back to either David from Six Feet Under or Dexter appeal to you?

I could say there are moments where maybe there’s a feeling of nostalgia surrounding that. But I don’t think nostalgia is necessarily a vitalizing creative impulse. And to be honest, it’s not something that is exciting in ways that new characters or opportunities on other fronts might be.

You spent a lot of time working with David Bowie on Lazarus. How did that change how you approached your career? Bowie was most famous for being unwilling to repeat himself, whereas you played these two characters for so many years.

It definitely changed things or steered me toward music in a way that I might not have otherwise been. As far as change goes, it reinforced my better instincts. Those being instincts to challenge myself, to take chances, to do things that were at least 49 percent scary, you know? While I did play those two characters for a long time — I don’t mean to liken myself to David Bowie — he’s someone who’s certainly associated with certain personas he adopted and then put behind him. As far as the Thin White Duke, or Ziggy Stardust. So that’s a part of why he held particular fascination to me as a fan of music but also as an actor. That’s probably true for lots of actors who are particularly compelled by what he did as an artist. 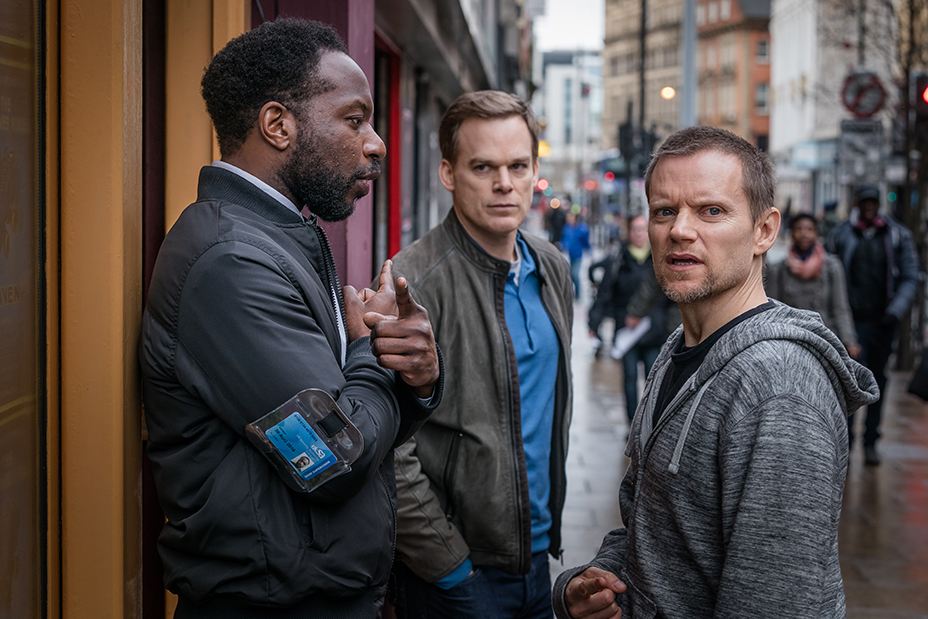 It was remarkable to be in his presence and remind yourself that for the whole of David Bowie’s career, was inside David Bowie. It’s kind of a wild thing to consider. But his iconic, otherworldly, rock god status was tempered by his kindness and his humanity and his open-hearted enthusiasm about the work we were doing. I’m sure it’s a skill that could have gone both ways. Someone like that could just keep then world at bay and allow people to cower in your presence. Or they could energetically do something that defused that dynamic. And he managed to do that.

As far as Safe goes, you said what appealed to you was it was a close-ended, eight-episode commitment. But have there been any discussions about doing another season?

No. I’m certainly open to collaborating with some or all of those people again, but there’s no plan to do more. It answers all the fundamental questions it poses.

MIPTV: Michael C. Hall on His British Accent in 'Safe' and Leaving 'Dexter' Behind