[This story contains spoilers for season two of Mindhunter on Netflix.]

If you gaze long into an abyss, the abyss also gazes into you: That well-worn Nietzsche quote might be the best explanation for what happened to Holden Ford, the impetuous FBI wunderkind played by Jonathan Groff, in the season one finale of Mindhunter. Holden, alongside his partner Bill Tench (Holt McCallany), had spent months interviewing incarcerated serial killers in order to glean insight into their mind-set, pioneering the science of criminal profiling.

Having demonstrated an uncanny knack for getting truths out of monsters, Holden started to ride way too high on his own brilliance, alienating his colleagues and jeopardizing the already uncertain future of the fledgling Behavioral Science Unit. In the season finale he paid an ill-advised solo visit to the serial killer Ed Kemper (Cameron Britton), who responded by giving him the most menacing hug ever committed to film. The season closes with Holden in the grips of a long-overdue panic attack after escaping Kemper, the darkness of his work and the recklessness of his approach finally catching up to him.

Season two, which picks up directly after the finale, sees Holden continuing to struggle with panic attacks in private, while still letting his ego run away with him at work. “Though Holden is still engaged with doing interviews with serial killers, now he’s getting a little snobby about it,” Groff tells The Hollywood Reporter. “He only wants to interview the killers that he personally deems worthy.” That new attitude, combined with his mental fragility, seems like a recipe for disaster — particularly once Holden travels to Atlanta to tackle the most difficult case of his career to date. 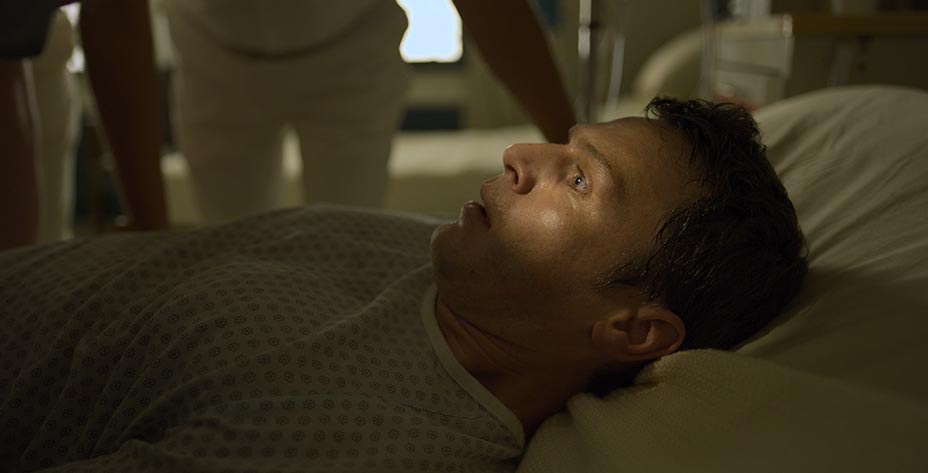 At the end of season one, it feels like Holden has the air punctured out of him by Kemper. He goes from incredibly cocky to total psychological collapse. What was it like to play that very dramatic shift in the new season?

I was so interested to see how the writers were going to pick Holden up off the floor after the finale. In terms of the continuity between his panic attack in the hospital [after seeing Kemper] and his panic attack at the end of episode one after Shepard [Cotter Smith] talks to him, I realized that any time there’s a mirror held up to Holden and he can sort of have a moment of self-awareness and really look at himself, it sends him into panic mode. That’s what Ed Kemper did at the end of the first season, he was turning the mirror back on Holden, and I think that’s also what Shepard does at the end of the season two premiere.

He’s in his element when he’s probing into other people’s psychology, but when it’s turned on him he can’t handle it.

Yeah, and when he’s in work mode, and he’s a dog with a bone, it sort of evaporates and he’s fine. It’s just these little moments when his blinders are removed that he sinks into panic. The minute he pulls his shit together for the [David] Berkowitz interview, and Tench says “I think he’s back,” I love it because it adds a layer of drama to every scene moving forward. We’ve logged this information as something that can happen to Holden, and now that factors into every interview, knowing that potential is there.

What goes into depicting a panic attack onscreen?

I’d forgotten about this until just now, but when we were filming the season one finale, in the moment right before Kemper hugs me, David [Fincher] had me do this (inhales and exhales rapidly), just a lot of breaths really quick in and out, I think just to get all of the blood out of my face. I did almost pass out. That was the scene right before I run out of the room. The panic attack scene in the season two premiere was sort of the same thing — we did it at varying levels, and I started out by overdoing it. I think I was making noises, it was a lot, and David was like, “OK, Groff, take it down a notch.” I love working with him because he can say something like, “Take it down 50 percent from that,” and I’ll know what he’s talking about. I tend to just throw it out there, and then he shades and shapes the level of explosion.

The Atlanta child murders is the most contentious case that the show has tackled so far. There are still a lot of unanswered questions about the case itself, and the FBI’s role in it was specifically controversial. How does the show approach the case?

I listened to [podcast] Atlanta Monster and read James Baldwin’s book, The Evidence of Things Not Seen. And Courtenay Miles — who was our first AD in season one and one of our head writers on season two — could have a degree on the subject of Atlanta between 1978 and 1982. She did so much research, she spoke to police officials that were there during that time, and tried to really get all the conflicting opinions and ideas about what happened. They really try to lay out in the scripts the political atmosphere of what was going on at that time in Atlanta — the first black mayor had just been elected, “white flight” was happening in the city center, the new Atlanta airport that we now know as this giant hub was about to open in 1980.

It was just a huge moment of change in Atlanta, and the last thing that the city needed — in some people’s minds — was a lot of publicity about these children being murdered. On top of which you have the FBI coming in there and trying to prove this core theory of the Behavioral Science Unit, that you can actually take this psychological work and these interviews, and make a profile of someone and use that to catch an active criminal while it’s happening.

Why is Holden so stubbornly determined that his theory of the case is correct?

One of the conclusions the BSU has drawn is that serial killers rarely cross racial lines, and so Holden firmly believes that this killer is black. A lot of other people think it’s the Ku Klux Klan, some people think it’s a child pornography ring, there’s a bunch of different theories. But Holden is there to help catch what he believes is a serial killer, in order to help the city of Atlanta and also to prove his theory right, to prove that this method of profiling works. 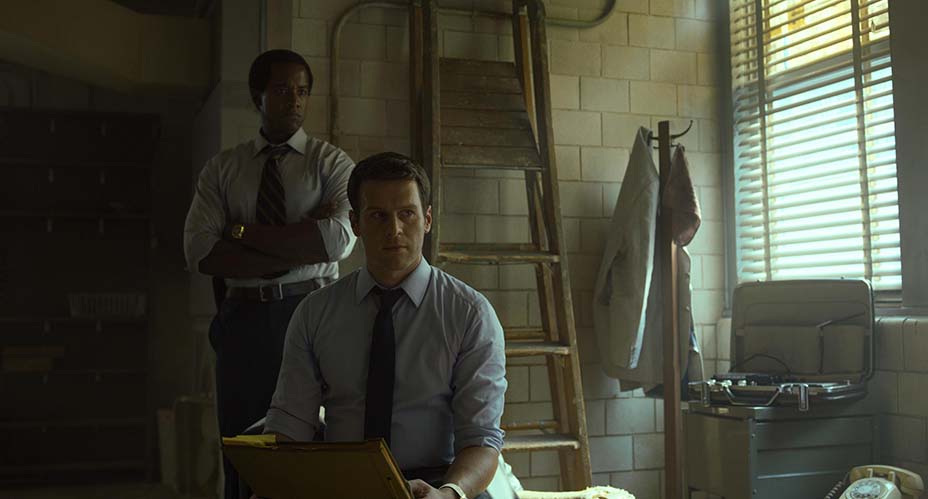 Season two brings back Jim Barney (Albert Jones), the African-American agent Bill wanted to hire in season one. What’s the dynamic when Holden is doing interviews with Jim versus Bill, whom he’s used to working with?

I love Albert, he’s a phenomenal actor, and they knew in the first season when they cast him that he was going to come back to play this bigger part. What’s interesting in those interview scenes is that this season, though Holden is still engaged with doing interviews with serial killers, now he’s getting a little snobby about it. He only wants to interview the serial killers that he personally deems worthy, which is a stark contrast from the first season where he’s like, “Feed me, I want everything, I want all the information! I want to meet everyone!” Now he’s a little more picky about who he’s gonna spend his very valuable time with.

So in episode three, he sort of begrudgingly agrees to go to Atlanta to meet with these killers who he deems unintelligent, and Barney ends up being sort of the Holden in those interviews, in that he’s the one that’s actually engaging with the person in a deep way, and ends up gleaning the information that Holden would normally glean. I loved reading that when I got the scripts, because there’s a clear evolution of these interviews in the second season, now that Holden kind of thinks he’s above it to a certain extent. Obviously not Charles Manson or David Berkowitz, but he maybe feels he’s outgrowing the interviews a little bit, and the character of Jim becomes my foil in that regard.

John Douglas, the real-life inspiration for the show, eventually moved away from FBI work and became more of an author and consultant. Holden is only loosely based on Douglas, but do you think he could take a similar path?

Well, I don’t know this for sure and I’d have to ask John, but my feeling from meeting him and reading his stuff is that he didn’t move away from the FBI because of disinterest. He had a total mental and physical breakdown from how intense the work was. He was, I think for his whole career, a very obsessive worker. His breakdown happened much later [than Holden’s], when he was a little bit older and had been in the thick of it for much longer, so I think Holden’s panic attacks are kind of a nod to that. We deviate a lot in terms of the characters’ personal lives. 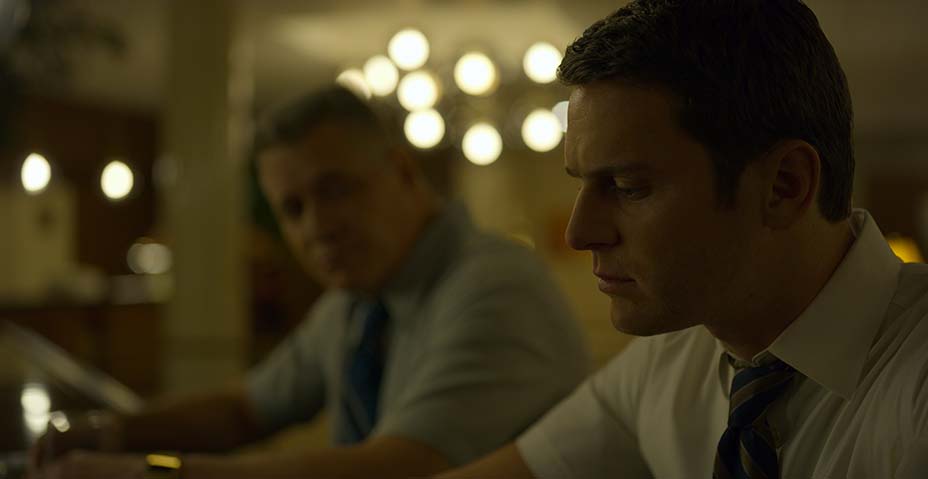 When Holden is hospitalized he calls Bill — who’s not thrilled about having to fly across the country to get him — and says he didn’t have anyone else to call. That line was interesting. Does he not have family?

I think at the end of the first season, we saw him kind of shut everybody out and go off on his own, so in my mind when I was reading that, when he says, “I didn’t have anyone else I could call,” it was a moment of self-awareness. He realizes that he has put himself on an island. I mean, the only person he could turn to at the end of season one was Ed Kemper! But when he calls Bill, I thought it was kind of a beautiful nod to the fact that at the end of it all, the person I’m gonna call, for better or for worse, is the guy that I’ve been through all this shit with. Sometimes we have those people where we experience something insane, and the only person who gets it is the one who was in the room too. I think that line from Holden is a reminder, at the top of the season, that these two are kind of bonded forever, in a way. As different as they are, they have this very specific fucked up world that will bind them together for the rest of their lives.