If you build it, they will come.

In a new initiative, Major League Baseball is planning to play a special game at the location of the 1989 Kevin Costner feature film Field of Dreams in Iowa.

The Chicago White Sox and the New York Yankees will play a regular season game Aug. 13, 2020 in Dyersville, Iowa, at the site of the beloved baseball flick. What’s more, the league will begin construction on a temporary 8,000-seat ballpark on the Dyersville site that neighbors the iconic movie location. A pathway through a cornfield will take fans to the ballpark, which will overlook the famed site. The right field wall will include windows to show the cornfields beyond the ballpark. Aspects of the ballpark’s design will pay homage to Chicago’s Comiskey Park, home of the White Sox from 1910 to 1990, including the shape of the outfield and bull pens beyond the center field fence.

The game, which will be broadcast by Fox and begin at 7 p.m. ET, marks the first-ever MLB game ever held at the location as well as in the state of Iowa. That the White Sox are participating is fitting, given that the 1919 squad featuring Shoeless Joe Jackson and dubbed the Black Sox for throwing the World Series (against the Reds) were featured in Field of Dreams. The game is being staged with the participation of Field of Dreams producers Universal Studios.

For baseball purists, the White Sox will be the home team, with the Thursday game followed by a Friday off-day before resuming the three-game series in Chicago.

Tickets to what is being called MLB at Field of Dreams will be announced at a later date. 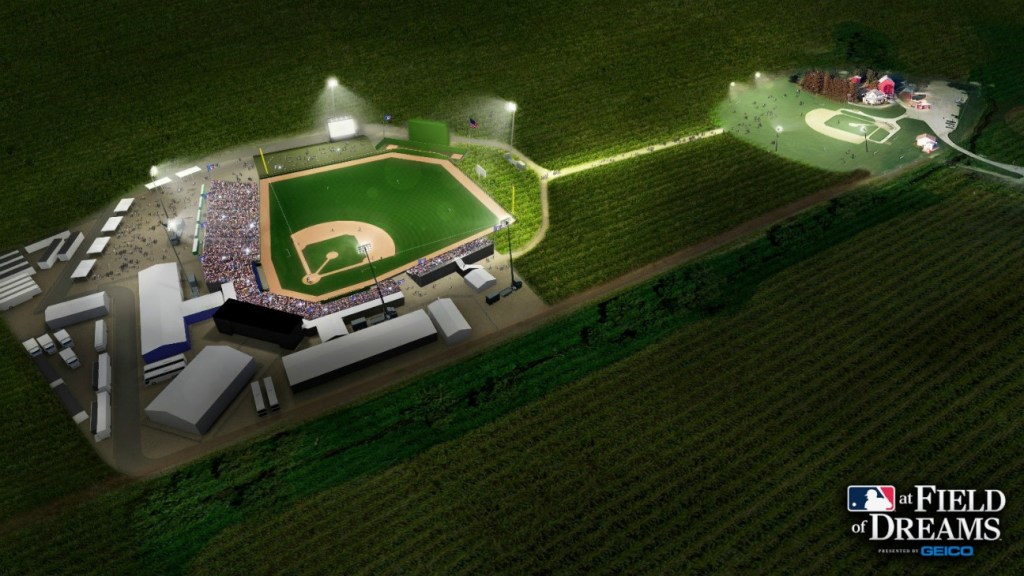 “Field of Dreams is an iconic, generational baseball story built upon a deep love of the game that transcends even the most impossible of circumstances,” said Jerry Reinsdorf, chairman of the Chicago White Sox. “The filmmakers tell a beautiful story that resonates to this day. It is an incredible honor for the White Sox franchise to be the home team against the Yankees in a special setting that will capture everyone’s imagination just like the movie does. It seems very fitting that 30 years after the film’s debut, MLB will build a ball field in an Iowa cornfield where we will come to play a game so that baseball fans can create their own memories to be cherished for decades.”

The event comes as MLB continues to incorporate pop culture into games with team-sponsored Star Wars nights across the county, among others. The league also recently saw the Yankees play rivals the Boston Red Sox in London as it looks to bring in new fans to the sport.

Lansing Family Farm, which was used in the movie, has been a popular tourist attraction since the film’s debut in 1989. It was purchased in 2011 by a group of investors whose goal was to preserve it and create a special place for baseball fans, tournament players and families. Owner Denise Stillman began working with MLB in 2015, which has now culminated in this special game.