As the number of shows on television increases year after year — more than 400 series aired in 2017 — episode orders are getting shorter and shorter. Which makes it all the more remarkable that Modern Family, ABC’s longest-running comedy, has been on the air for nine seasons.

The series is celebrating its 200th episode on Jan. 10, and it could be one of the last comedies to ever reach that milestone.

“I often joke to castmembers as we introduce our 198th episode that if we were on Netflix, we would be in our 25th season and Manny would be in his early 40s by this point,” co-creator Christopher Lloyd told The Hollywood Reporter at the cake-cutting ceremony for the landmark episode. “I think it’s a point of pride for us that we can still do quality work in a 24-episode season. In fact, I think there’s been a little bit of maybe a rush to reject network television in favor of the Netflix and Amazon series and cable series, as though network stuff is nothing but commercial. I think we still do put out a good product and we challenge ourselves to keep the quality of the show up.”

“It’s thrilling for us. When we made the first one, if we were expressing our wildest dreams, we’d get to 100, not 200, so it’s very exciting,” he adds. “When we had our table read for the 200th, I felt there was a genuine sense of pride and excitement and achievement that we have made it this far and everybody still cares and wants to keep the show good.”

After 11 seasons and more than 250 episodes of Fox’s Married…With Children, star Ed O’Neill never expected to join a new series — especially not one that could last another decade.

“I was the only actor on the show that did every single episode,” he told THR of his time on the Fox comedy. “I said many times after Married I would never do another half-hour situation comedy. I wasn’t going to do it. When I first had a meeting with [Lloyd and co-creator Steve Levitan], I said, ‘I’m not doing it. I wish you all the best of luck.'”

Obviously, O’Neill relented, and the ensemble cast — featuring the Emmy-winning Julie Bowen, Ty Burrell and Eric Stonestreet and the Emmy-nominated Jesse Tyler Ferguson and Sofia Vergara — came together. When the show premiered in 2009, it was lauded for its diversity — it featured a married gay couple — and Lloyd said he hoped if he and Levitan pitched the show in 2017, it would come together in the same way. 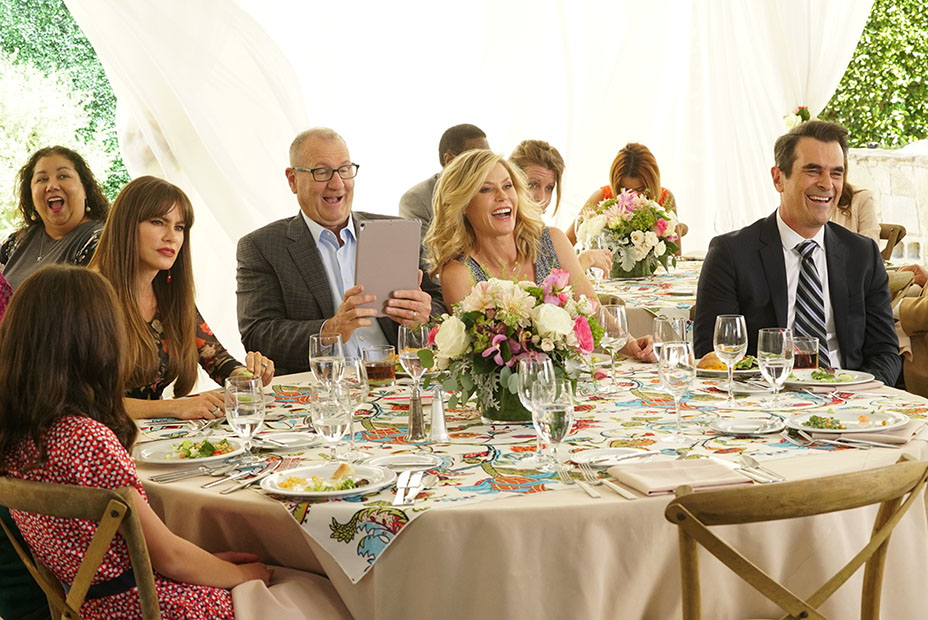 “You know, things have come pretty far, pretty fast. It’s amusing to me that a show that was sort of celebrated for pushing diversity — we had a gay couple, my god! in the same show with a mixed marriage, etc. — now we get accused for not being diverse enough. Well, that changed fast. We were the poster children for the way to do it right only a few years ago, and now we’re the demons in some people’s eyes,” he says. “But I think really what makes the show work is that there’s careful writing that’s a good mix of earned comedy moments and earned emotional moments, and it’s performed impeccably. That never goes out of fashion.”

Something else that’s timeless is the universality of the stories.

“The one thing that never fails to amaze me is that we’re in 200 countries around the world. I’ve heard from people in the farthest stretches of the earth, and they say, ‘Oh my god, I love that story when —,’ and that was a story that’s taken directly from my life or one of our writers’ lives,” Levitan says. “It just goes to show you that families are families, and that you may live in different sized houses or drive fancier cars or you may live in a big city or in a small town, but families are families. We all want what’s best for our kids. The world is changing, our kids are struggling with some of the same things all over the world. So, the more specific you can make it to your own unique experiences, the more it resonates with people because they’re going through the same exact thing.”

After a year in which political comedy has transformed the television landscape thanks to an unprecedented administration in the White House, there is a temptation to get a little more overtly political. But Levitan and Lloyd said it’s not something they think is in the cards for Modern Family.

“Our mission here has always been to make people laugh and to make them feel something,” Levitan says. “But if our mission had been to change hearts and minds, then I think we would do it exactly the same way — get an audience to fall in love with these characters. Show an audience that people like Mitch and Cam, for example, are more like them than they realize, get them to fall in love with them, and suddenly, they realize, ‘Oh, it’s harder for me to hate or discriminate against people who are different than me.'”

And while it’s tempting to address something like, say, a tax bill that would eliminate the adoption tax credit — an issue that would directly affect Mitch and Cam if they were to decide to have another child, and Levitan has said he’s thought about it — it’s not something people look for in Modern Family.

While ABC renewed the show for a 10th season, Levitan and Lloyd confirmed that, as of now, that will be its last. (ABC and producers 20th Century Fox Television would have to ink the large cast to new, expensive deals should they want the show to go on to an 11th season.)

“Our plan is to end it at 10. If we can leave with most of our audience wanting more, I think that’s the right way to do it. Never say never, but I just can’t imagine that we’d go past that,” Levitan says.

The idea of a spinoff has been posed — ABC toyed with the idea in 2013 but nothing came of it — and the showrunners say it’s not something they have had “substantive conversations about,” Levitan says. Lloyd, however, can see the benefit of doing a spinoff thanks to the audience interest in many members of the show’s ensemble cast; it’s something they will address as the show begins to wrap up. And while it’s still more than a year away, Lloyd says they have begun to form some “loose ideas” about how to end the series.

“We went through these questions on Frasier, when we brought that around after 11 seasons and sort of said, ‘Well, the Shakespearean route on that is a birth, a death or a wedding,’ and we managed to effectively do all three in the final episode,” Lloyd says. “So it may be some conversation that starts there, but we haven’t figured out the episode we’re doing three weeks from now. It’s just a little over a year and a half from now. We’ve got time to think about that.”

Growing Up 'Modern': Ariel Winter on Family Turmoil, Online Shaming and a New Life in College