[This story contains spoilers from the eighth episode of Apple TV+’s The Morning Show.]

When The Morning Show began, the Apple TV+ series quickly established that a major male TV anchor had been sidelined by a sexual misconduct scandal while at the top of his game. But it’s not until the eighth episode that viewers of the Jennifer Aniston and Reese Witherspoon drama are able to truly see what life was like for Mitch Kessler (Steve Carell) when he was still the king of morning TV.

In “Lonely at the Top” (which released on Apple TV+ Friday), The Morning Show flashed back to Mitch’s 50th birthday — a milestone that he celebrated with his staff to extravagant proportions before the #MeToo movement. In the jump to the past, many no-longer-accepted behaviors now stand out: Mitch had just ended an affair with his producer Mia (Karen Pittman); he showers the newsroom with sexual innuendo aimed at female coworkers; and an over-the-top surprise celebration sees Martin Short’s character (who in the future is an accused rapist) leading a song-and-dance number with a troupe of scantily clad female dancers for Mitch and the entire staff’s amusement.

And yet, almost no one bats an eye at any of it.

“This was an instinct to want to show what Mitch’s life was like at its peak of success — when he was head of the fraternity called The Morning Show,” showrunner Kerry Ehrin tells The Hollywood Reporter of the flashback episode for The Morning Show, which is also the name of the fictional news show within the show. “Everyone really looked up to him. It was a patriarchy and he was like the Alpha man. The episode also shows the fun side for Mitch and how other people were joining in on it and accepting it — that’s the way that it was.”

The dance number in particular, Ehrin says, “is to show how really carelessly we throw sex around.” Viewers, now aware of everything that has transpired since Mitch’s 50th, will feel the dark underbelly of the performance, which was slowed down to focus on Mitch’s reaction to the office celebration. “Sex has often been part of parties and celebrations, where this titillating sexuality is considered a fun thing.” 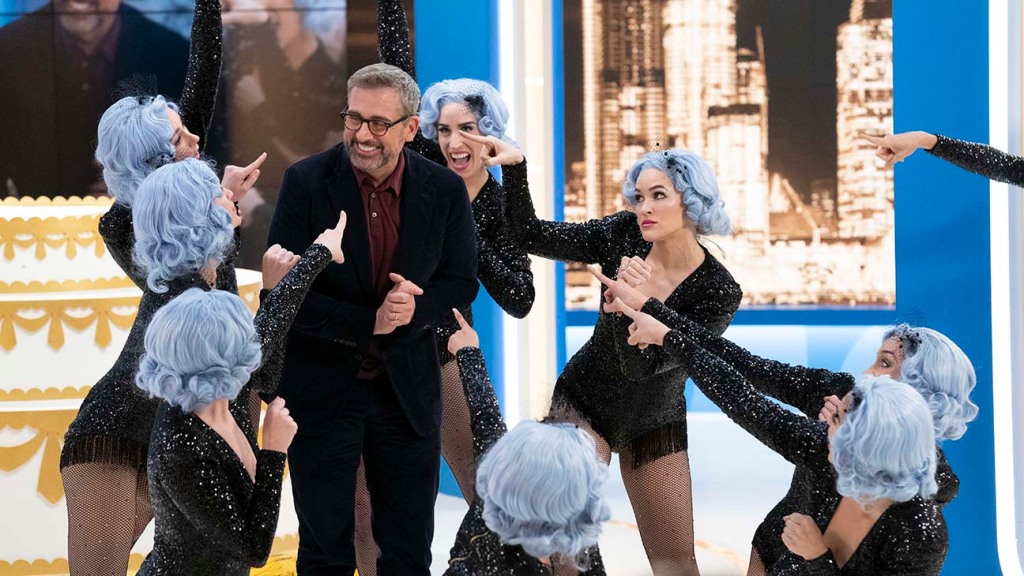 But mainly, the episode overall was designed to introduce Hannah Schoenfeld, the producer played by Gugu Mbatha-Raw, as a central piece in The Morning Show story.

Over the course of the season, Mitch has mentioned that one of his producers traded sex with him for a promotion. “Lonely at the Top” identifies that producer as Hannah, but the episode reveals that Mitch’s perception of what happened is just that — his perception. What is revealed during the flashback time period is that Mitch sexually assaulted Hannah, and she was offered a bigger job by the network for her silence.

At the time, Hannah was a junior booker who made an impression on Mitch. When the news team travels to Las Vegas to cover the deadly mass shooting at the Route 91 Harvest music festival, Mitch requests that Hannah come along. While walking along the Vegas strip, Mitch runs into Hannah and helps ease her mind from the pain of covering such a tragedy. When the walk with her boss and mentor ends with an invitation to watch a movie in his hotel room, Hannah accepts. Later, when she gets up to leave, Mitch comes on to her and initiates sex in his hotel room. The scene focuses on Hannah, who is visibly frozen throughout the experience.

“Hannah, who is really quite innocent at that point, looks up to Mitch,” says Ehrin of the eager professional. “Within that world that’s been established where he’s the king, she looks up to him. He’s funny, he’s cool, he talks to her and he notices that she did a good job. And [when he compliments her on her work before Vegas], we as the audience don’t know, was that the beginning of him hitting on her? Has he had his eye on her? We don’t know. He doesn’t know. If you really sat him down and made him address his actions, he would probably have to go back and acknowledge stuff he didn’t not want to acknowledge in the moment.”

She continues, “The beat where it really became clear is when Mitch is in the elevator heading out to Vegas and says, ‘Don’t send [Hannah’s boss] Jared, send Hannah.’ And Chip [Mark Duplass], in that moment, he knows. He doesn’t like it and he doesn’t know what to do, so he just goes with it. Because that’s the way the world has worked forever. So now, we are seeing that from a perspective of a world that is much more aware and that is trying to change. I think it’s very interesting to go back and look at things that were common, normal and accepted and realize how egregious they were.” 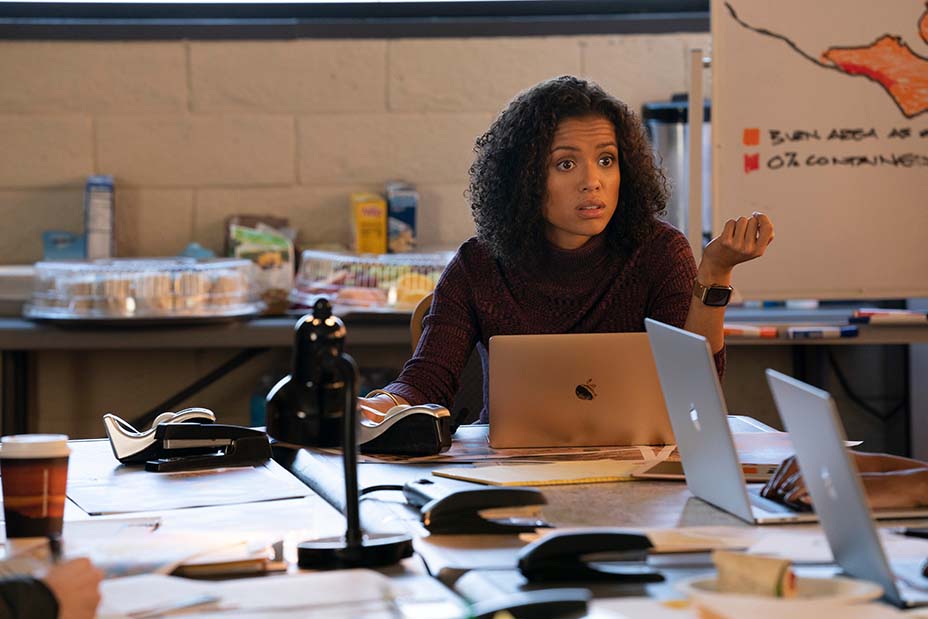 After Vegas, Hannah returns to the office and when Mitch sees her in the hallway, he barely acknowledges her. The slight motivates her to storm into the office of the head of the network, Fred (Tom Irwin), and tell him what happened. But before she can share any of the specific details through her tears, Fred offers her the promotion to take over as head booker. As she realizes the quid pro quo she is bring offered, she tells him, “So this is how it happens.”

The end of the episode makes clear that Mitch and Hannah have differing views on the night. Mitch returns to the newsroom just as the real story of Harvey Weinstein is breaking, precipitating the start of the #MeToo era. Upon hearing that the Hollywood mogul has been accused of sexual misconduct, Mitch comments, “Wow, what a creep.” Aniston’s character, co-host Alex Levy, agrees, “What a pig.”

Mitch’s ignorance when reacting to the Weinstein story drives home a point that Ehrin has been making since The Morning Show premiered. In a bid to not alienate the male audience from identifying with Mitch, she did not want to reveal him as a “monster” from the get-go. “I wanted men to watch the show and recognize themselves. And if you see a guy who is just a monster you’re like, ‘Oh, I’m not that guy,'” she had said after the three-episode premiere. Now, about the Weinstein scene, she says, “Steve played his character so brilliantly because he really does capture all the layers of compartmentalization that Mitch is capable of that is kind of borderline sociopath.”

In the present timeline, viewers last saw Mitch arriving at Hannah’s door to ask for her help. The final two episodes of the season will continue to explore the differing perspectives that Mitch and Hannah hold about what happened. For Ehrin, she hopes that by season’s end, their specific story has the power to enlighten and shift perspectives around sexual misconduct.

“This episode, to me, is about showing that someone like Mitch can call his actions inadvertent or say they were consensual, but there’s also a part of him that is choosing to not actually see the person he’s with, because it’s not convenient to what he wants,” says Ehrin of the power Mitch held at the time over someone like Hannah. “Does he really think she’s totally OK right now and she’s just crying? Or is he just moving quickly past that and telling himself, ‘Oh, this is why she’s here.'”

She adds, “And it really was to look at the behavior of men. And to break that down and to show that there is a complex human being that you’re dealing with because, for most of time, I don’t think that most men viewed sexual conquests that way.”