For the final season of his computer hacker thriller, Mr. Robot creator Sam Esmail has paired each episode with titles and themes corresponding to a 4xx client error: “401 Unauthorized,” in which Elliot (Rami Malek) tries and fails to take on the Dark Army directly; “402 Payment Required,” in which a shocking final season twist came to light, but the toll for the full reveal has yet to be paid; “403 Forbidden,” in which Mr. Robot (Christian Slater) pushes Elliot out of his comfort zone and into the arms of a forbidden night of physical and emotional comfort; and “404 Not Found,” in which Elliot and Tyrell (Martin Wallström) become lost in the forest, with the latter eventually losing his life.

Given the track record of the season thus far, not to mention the series thus far, the title for the final season’s fifth episode should have been a dead giveaway: “405 Method Not Allowed,” a signal that some how, some way, Esmail would deliver another standout format-shattering installment. Past episodes of Mr. Robot have deviated from form in such ways as a 20-minute opening sitcom sequence and an entire episode presented as a single take; here, for the final season, Esmail provides viewers with an entire hour devoid of spoken dialogue, with the exception of two line reads: one at the top as Darlene (Carly Chaikin) tells Elliot “we don’t have to talk,” and one at the very end as the vicious Fernando Vera (Elliot Villar) comes to Elliot’s therapist Krista (Gloria Reuben) and warns: “It’s time we talk.”

'Mr. Robot' Final Season: Inside That Fateful "Howl of Death"

Instead of spoken dialogue, “405 Method Not Allowed” leans on texts between characters, not to mention an insane amount of action, including Elliot and Darlene ripping through a security firm in order to hack their way into the heart of the Dark Army. Eventually, Elliot’s forced on the run, quite literally, sprinting through Central Park and sustaining a whole lot of physical abuse in the process. The action all transpires during Christmas Day (at one point, a headline on television reads: “Yuletide Mayhem at Central Park”), a propulsive follow-up to the previous week’s contemplative Christmas Eve outing. If Tyrell’s swan song episode was something in the realm of the Mr. Robot version of It’s a Wonderful Life, then “405 Method Not Allowed” falls in the Home Alone category — fitting, considering the formative role of a Kevin McCallister snowman in Elliot’s early childhood.

“When we play with format, we don’t start by stipulating, ‘This is the episode where we must do X, Y and Z,'” Esmail tells The Hollywood Reporter about how the episode came together. “We start making the episode, and then we find our way in terms of how to tell the story. When we started breaking the episode, we knew this was going to be the big hack on Virtual Realty. We started realizing as we started working through Elliot and Darlene’s storyline that they had to be very quiet. In their relationship, they had just had a big fight in the third episode. Darlene was still pretty angry at him in episode four. We felt Darlene wasn’t ready to make up with Elliot by episode five. We didn’t want it to be that quick. We thought there would be a frigid nature between the two of them, where they go, do this hack, and let it be all about business. That felt right to us, emotionally, that there was a silent treatment they’d be giving each other.” 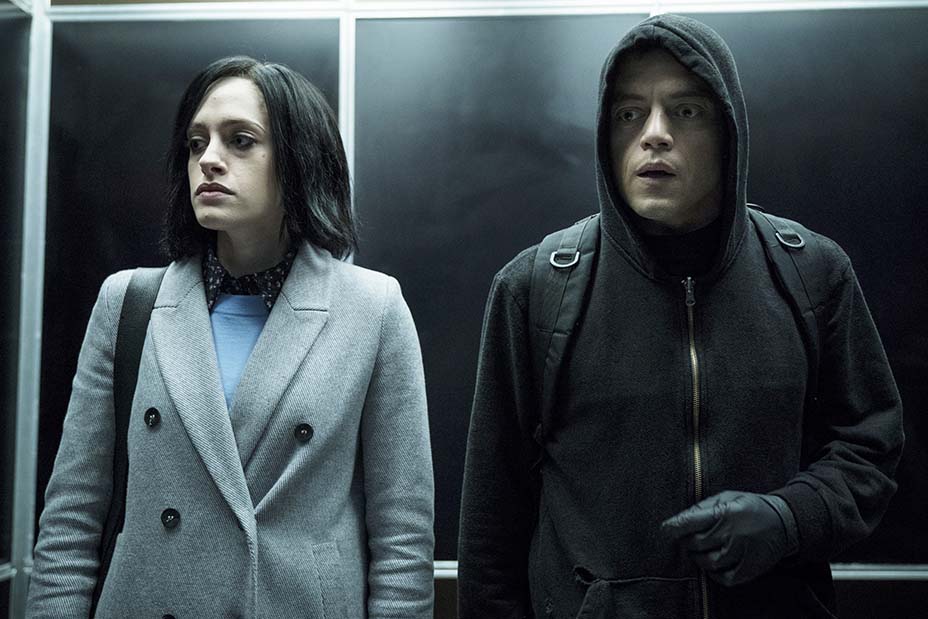 “Once we cracked that,” Esmail continues, “we stepped back and were like, ‘Wait a minute …’ We looked out at all the other storylines. Price (Michael Cristofer) has this lonely, quiet Christmas morning. Instead of being able to be with her family, Dom (Grace Gummer) has to go off and be away from her family, in order to do this mission for the Dark Army. Even Krista is preparing Christmas dinner for her boyfriend. We just felt we didn’t need words for this episode. It added to how we wanted the episode to feel. When there’s silence, there’s an inherent tension that comes along with it. That’s exactly what we wanted from each of those storylines: Dom hacking into the red light, knowing that leads us to Darlene and Elliot; Krista being followed around by who we know as Vera’s surrogates; and of course, Darlene and Elliot’s storyline.”

In giving Mr. Robot viewers the “silent treatment” (which does not feel like a totally fair description of the episode, given composer Mac Quayle’s pulse-pounding score humming beneath all the action), Esmail believes the series uses some of its most notable tools to enhance its core themes: “In this day and age, as we’re leaning into tech — and of course, our show revolves around tech — a lot of people text and don’t call each other. It leans into the isolationism that can be a consequence of technology. For a lot of reasons, we thought that really worked for this episode.”

“Ultimately, this is the great thing about television and what a movie can’t do,” says Esmail, who first conceived of Mr. Robot as a feature film, before adapting his own script for television. “You can make a creative decision like this within the space of a chapter if it makes sense for that hour in the episode.”

As for where Mr. Robot goes next as it continues barreling toward its series finale? Anyone’s guess — but with Elliot in bad physical shape after his daring escape from the police, not to mention an imminent meeting between Price and the Whiterose (BD Wong) illuminati group known as Deus, it’s sure to be brutal, especially given the title of the next installment: “406 Not Acceptable.”

Sam Esmail on 'Battlestar Galactica' and Life After 'Mr. Robot'