Sam Esmail’s final season of Mr. Robot has added another series regular to the pile of corpses — except this time, few people are going to be crying about the casualty: Janice, the deadly Dark Army operative played by BlacKkKlansman star Ashlie Atkinson.

Following the game-changing events of “407 Proxy Authentication Required,” which revealed the central trauma in Elliot Alderson’s (Rami Malek) life, “408 Request Timeout” once again sets its focus on what’s happening with Darlene (Carly Chaikin) and Dominique (Grace Gummer) — namely, that they are at the mercy of Janice and the Dark Army, torturing them to find out Elliot’s whereabouts. In that effort, Janice sticks a knife in Dom’s chest, puncturing her lung, creating a time bomb of sorts: the clock is ticking for Darlene to break and give her brother up, or else Dom will die from her wounds.

Even though Darlene eventually relents, Elliot’s own quest takes him elsewhere, leaving Janice to call the Alderson sister’s bluff and call in the order to execute members of Dom’s family. But Dom has already beaten Janice to the punch: she’s called in a favor with a criminal who specializes in disappearing people, getting her family out of harm’s way just in time. Before Janice can realize what’s happened, Dom pulls the knife out of her own chest, takes out a Dark Army operative, snatches his gun and shoots up the rest of the agents in the room — including Janice, dropped with a bullet to the head.

It’s the end of the line for Ashlie Atkinson’s time on Mr. Robot as Janice, a taxidermist who gleefully offered up taunts and threats along the way as she lorded over Dom DiPierro. For Atkinson, even if her character didn’t survive past the eighth hour of the season, all time spent in the Mr. Robot universe was time well spent indeed. Ahead, The Hollywood Reporter speaks with the latest fallen member of the sprawling Mr. Robot ensemble about her takes on Janice, her origin story with the USA Network thriller and more. 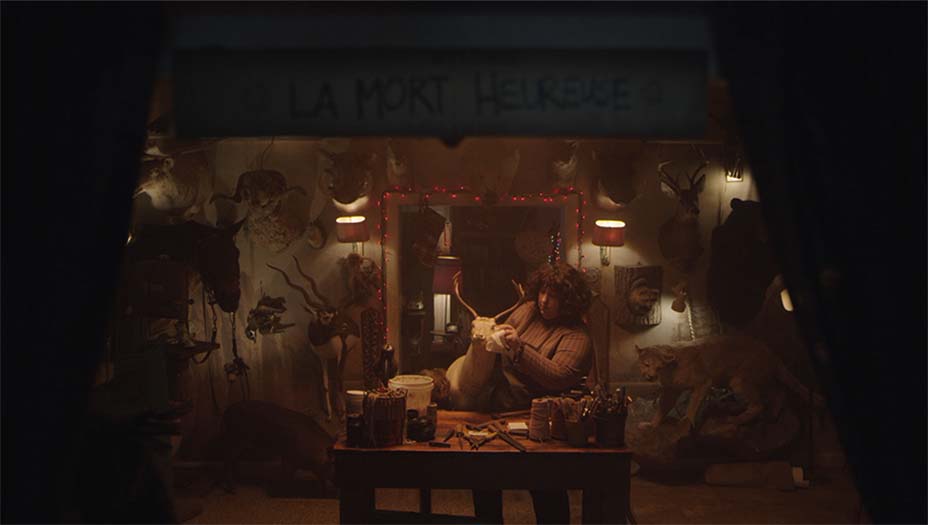 Oh, man. It was so much fun to play her. The fact that she goes so “Domlene,” as the shippers call them, can triumph? It’s kind of fantastic. It makes me very, very happy. If Janice has to get shot in the head, it’s so that relationship can survive!

Long before you became Janice, you and your husband were big fans of Mr. Robot, right?

That’s right. I was a huge fan. Of course, I still am. My husband and I would watch it all the time. He would not let me tell him anything about anything we shot. I have been sitting on these secrets for months and months and months. I had been big into “Domlene” since the very beginning, since before their hookup. In a very weird twist, I actually auditioned for Dominique DiPierro four or five years ago, whenever that was. I was terrible! It was so wrong. It was so absolutely wrong. I was never right for that role. It was so nice of them to even let me hold the piece of paper and go in for it, but it just didn’t fit. I couldn’t understand how to make her happen. When I saw Grace come into the show, I was like, “Oh, of course. That’s who this character is. That makes perfect sense to me.” So I have always had a soft spot in my heart for Dominique.

Only for her to turn around and shoot you in the face!

You auditioned for Dom, and you couldn’t find the character. Obviously, you found Janice. What was it about her that resonated with you?

There’s a lot. Even just the way she speaks. As soon as I read my audition sides, which are the scenes of dinner into me ruining Dominique’s life [from the season premiere], and one of the first phone scenes where I ask her if she’s 99.9% sure… even just reading those, I automatically understood the lilt of Janice. It made perfect sense to me that she was sort of energy-wise actually quite light and bright in her own way, even though she’s bringing pain and fear and destruction everywhere she goes. I really loved that. I loved playing against that and having her be someone who is a super joyful character. When I auditioned, I remember the actress who went in before me was phenomenal. I’d seen her in tons of things. The actress who went after me was also phenomenal, and I was in the middle of bingeing her show at the time. I was like, “Ridiculous. I don’t have a chance in hell.” But I made Sam laugh at one point during the phone call scene. I made the name “Dominique” into a musical note. He laughed at it, because it was so absurd. I thought at that point I might have a shot at this. Turns out I did. Who knew?

Before she dies, we get some backstory on Janice. There were some questions about her and her past as a child, even though Janice claims she was perfectly “normal.” Do you buy that? Is she someone who has just been beaten down by the Dark Army, or is she someone who is uniquely into all of this?

I think Janice came out fully formed, like she hatched from an egg. (Laughs.) It’s like she came out of a nest with the coat and the hair, the whole thing. Can you imagine that creature as a child? It’s so funny to me. I just picture her as being … she’s the bad seed, the way I picture her. I feel like there’s something about her lack of remorse that goes so deep. I picture her fascination with dead things and with control, because that’s when she was really young. I was only free to do this and exercise this idea in episode eight, because you’re always afraid to give too much backstory; what if the writers have something very different in mind, and you’re wrong? But when I finally got this information, I thought I could actually start to think about it. I pictured her as a kid who was doing the serial killing of animals in the woods, playing with dead things.

Exactly. But I also think she was super social and super friendly and that she was able to isolate those areas of herself so strongly that her parents had questions, but not the diagnosis. I toyed with the idea they didn’t believe the diagnosis, and were like, “Let’s just get her out of our house. She will turn 18, we’ll get her out of the house.” Maybe they sent her to boarding school early. Their main idea was for them to be safe and to hold me at arm’s length. I mean, it’s Christmas week, and Janice does not have anywhere to be. She’s having dinner with Dom and her mom. Dom is clearly Janice’s most important relationship, which means before this, there’s a huge vacuum of what you would consider natural, familial and friendship. I think that’s an interesting idea, that her parents couldn’t get any help, so they just played it cool, shipped her off and then just would be out of town every time she needs to come back home. 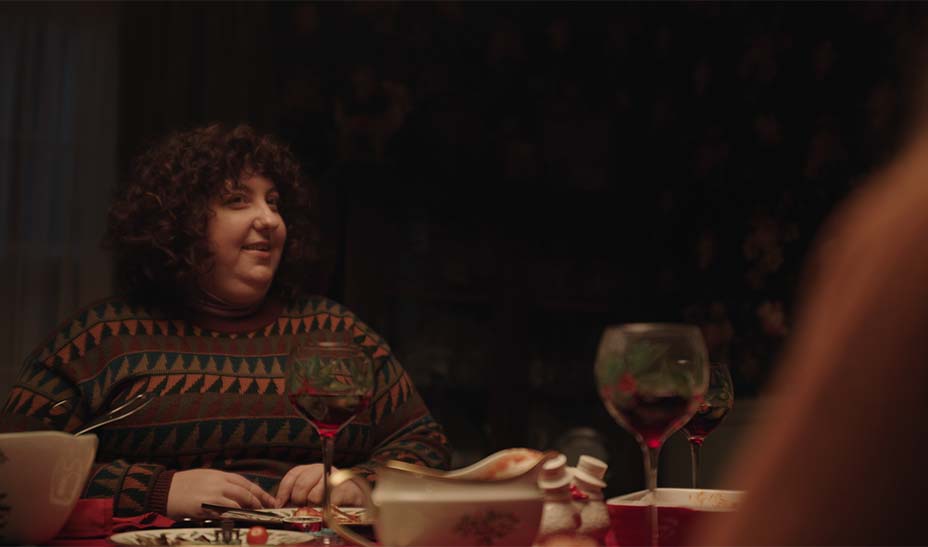 Your comment about how Janice views Dom… it’s funny, because if you look at the Mr. Robot rogues gallery, almost all of them have some measure of love for the person they’re up against. Vera toward Elliot, Tyrell toward Elliot, Mr. Robot toward Elliot, whoever… and in the case of Janice, these feelings toward Dom. There’s always some semblance of love from the antagonist toward the protagonist.

I absolutely agree. There’s echoes of it in all of those characters. It creates a really interesting dynamic between me and Darlene, too. She’s the reason I have to hurt Dom. In episode eight, there’s this interesting dynamic where even though I enjoy hurting people, Darlene is the one who is making me do this. If Darlene was dead and hadn’t wiped her phone, none of this would be happening. There were certain takes where I felt I really had to lay this at her feet: “This is on you, girl. I’m not doing this. I would love to help her. You have to do something before I can do that.” In a weird way, it’s that line Vera says about how Krista becomes the bat with which he’ll beat Elliot. Dom becomes my bat to break Darlene. It’s really interesting that we’re wielding people against people. The love relationships are really complicated. I don’t know if Janice enjoys hurting Dominique. I kind of think she doesn’t. But I also don’t think she has any remorse. I don’t think something like remorse computes for Janice in any meaningful way.

As someone who loved Mr. Robot before becoming a part of Mr. Robot, what was it like for you to be a fly on the wall for some of the big moments from the final season, such as the table read? Though I understand for last week’s episode, you and everyone involved were asked to step out of the room…

I have to say, I’m pretty terrified, because my episode follows last week’s episode. I have to follow Elliot Villar, who is a brilliant actor. That episode with him, Gloria Reuben and Rami… the theatricality of it. I mean, 407 was one of the best episodes of television I’ve ever seen. So to be the one after it? I mean, are you kidding me? It’s so mean! It’s so mean, Sam! (Laughs.) I hope he reads this. Sam, I didn’t know that that was what you were going to do. I don’t appreciate it! We watched the episode last Sunday. We turned it off. My husband goes, “That was heavy, yeah?” And I’m like, “Yeah… but I have to follow that. I’m screwed.” (Laughs.)