Long ago, seeking shelter from pouring rain with nothing more than a pair of umbrellas, two power players barked fire at each other: Michael Cristofer’s Phillip Price and BD Wong’s Whiterose, among the deadliest pieces on the Mr. Robot chess board. The most prophetic point in the war of words came as Price, then the CEO of E Corp., announced his true profession: “I’m a mercenary. I don’t play fair. I would rather see you lose than win myself.”

Those words came back in full force during “409 Conflict,” written and directed by series creator Sam Esmail, as Price honored his previous threat by joining forces with Rami Malek’s Elliot Alderson and Carly Chaikin’s Darlene to take down Whiterose once and for all. The motivation: Angela Moss (Portia Doubleday), Price’s estranged daughter, assassinated on Whiterose’s command in the final season premiere’s opening moments. The result: Price is now dead as well, shot and killed on the Bronx County Courthouse steps by none other than Whiterose herself — but in many meaningful ways, the jig is up for Whiterose as well, as all of her funds (as well as the money belonging to the various members of the Deus Group) are gone, robbed thanks to Price’s collaboration with the Alderson siblings. Forget the Five-Nine Hack; after the Christmas Miracle of 2015, the top 1 percent of the top 1 percent is done, thanks in no small part to a remorseful 1-percenter in Price.

“It’s a huge step forward for Price,” Cristofer tells The Hollywood Reporter, surveying his character’s final, fatal arc. “Here’s a guy who basically thought he was God. He has such a distanced relationship with humanity and the world, except as a plaything for himself. Then there’s this slow introduction of his relationship with Angela. There was this strange crack in him that appeared. It made him pursue her in some way. It slowly built and accumulated [across the series] until the horror of the first episode this season, where she’s just murdered. I didn’t know she was going to be murdered when we were [filming] season three, but I do know that all the things Phillip Price obviously turned away from and rejected in his life — intimacy, friendship or any kind of love — suddenly he seemed to find opportunity for all of that in this young woman, his daughter. I guess there’s an old, tragic self-recognition. I think those seeds were planted for him early on, and they all happened through the character of Angela.”

With Angela off the board — cruelly removed right in front of Price, powerless to save his own daughter — the deck was set for a reckoning between the E Corp. CEO and Whiterose, the violent visionary at the heart of the Dark Army. Price’s turn wasn’t without its own share of melancholy, of course. For instance, there’s the dialogue-free “405 Method Not Allowed,” in which Price spends Christmas morning on his own, alone in a restaurant, a few tables away from a happy family. Cristofer says he tried to channel that quiet sorrow in Price during these final episodes, describing the difference in playing the bellowing power broker this season as opposed to previous seasons as “the difference between confidence and doubt.” 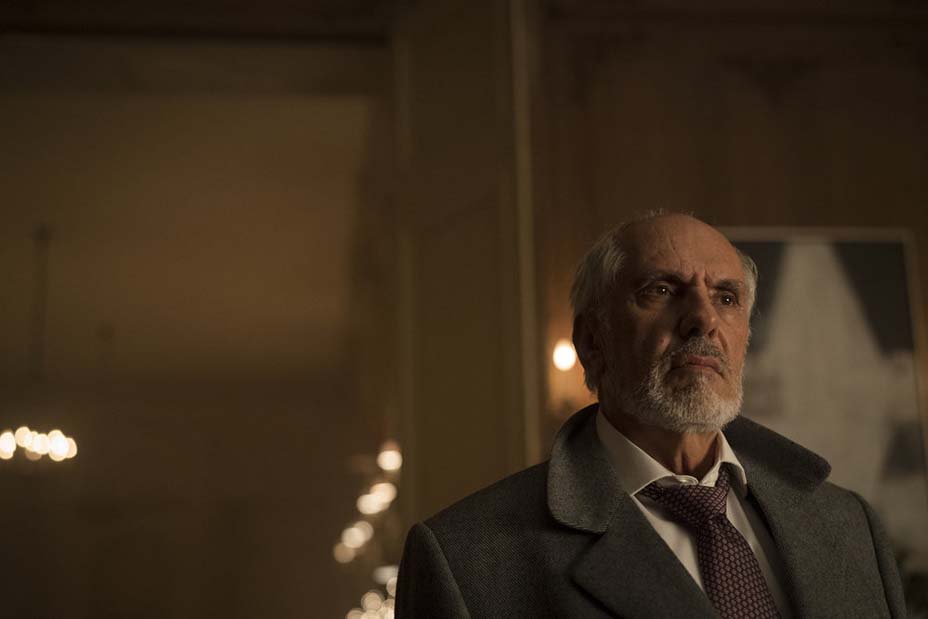 “He lived his life with a kind of self-confidence that was epic, and then suddenly, after Angela, he’s thrown into doubt,” says the actor. “That was the key to me: ‘Is this right? Is this wrong? What have I done? I thought I did everything right…did I do everything right?’ There were plenty of moments [that reflected those questions], some of which did not, unfortunately, make it. There was a fantastic scene where he was burning all of the photos and information and things he had accumulated about Angela, just before he heads off to the meeting [with Whiterose]. I think it was, again, part of the recognition that he may have not done all of this as perfectly as he thought. What’s being proven to him is that he may have been wrong. The success of his life, thanks to his bargain with the devil in Whiterose, it all begins to crumble, and then he finds his way. It’s funny: in his doubt, after four seasons without a scene with Rami, Price in his doubt goes and saves Elliot [in the season premiere], and he goes in circles for a little while, but he ultimately joins forces with him to take down Whiterose.”

At first, Elliot and Darlene’s plan involved using Price to get all members of the Deus Group in one central location, in order to hack their cellphones and therefore their bank accounts. The plan initially backfires when Whiterose senses that things are amiss, leading to a one-versus-several confrontation between Price and a huge force of the Dark Army. The hack still goes through, though not without some hitches; Darlene pulls off miraculous feats to target the greater Deus Group, while Elliot manages to score Whiterose’s number from a nearby cellphone tower. In the final moments of the hack, Price peacocks at Whiterose on the steps of the Bronx County Courthouse, buying Elliot as much time as possible and getting in one last word edgewise about avenging his daughter.

“The one thing every person has is regret,” Price tells Whiterose. “You weaponize that, and then you use that weapon against them, to destroy them. But here’s the thing I realized as of late. With Angela, it didn’t work. Angela lived on in the lives of the people who loved her, and that love — that love — fuels their unwavering resolve to turn the tables to destroy you.”

“It was one of those instances where the writing was so good,” Cristofer says about filming Price’s final moments. “Sam is kind of disgusting, really. It’s depressing to be around him. It really is! He writes them all, he directs them all, and he imagines them all. It was one of those great evenings. There was the technical aspect of it all: we had to shoot on all of those steps, and every time we finished shooting, we had to come back down. But I got it. I got it in the writing. Number one, he was stalling, so the hack could happen. Number two, he knew he was dead. He knew he was dead. Number three, because in the previous scene [Whiterose] conjures Angela to pretend she’s alive, it just triggered that recognition in him about all of those other people who surrounded her and loved her. That’s pretty good writing, you know?”

The episode ends at Whiterose’s home, the Dark Army leader applying makeup in the mirror as gunshots ring throughout the air. Even without money, she is clearly not without moves. But where exactly does the series go from here, with so little time left on the clock? Even after Price’s death, Cristofer knows some of the answers regarding the endgame: “I hope it works. I think [Esmail] really achieved something. I have to be careful how I put it….”

At last, Cristofer paints the following picture of the final arc: “I said to Sam after we read through all of [the scripts], and then I finally heard [the finale], I think he’s managed to do the journey of the hero, and not the Joseph Campbell one, but literally Homer. It’s Ulysses in The Odyssey. It’s the man separated from himself who has to journey to find his way back to himself. I think we have done that with these four years. I think you’ll know when you see these last few episodes, whether I’m right or not. There are so many parallels to The Odyssey…but it’s all inadvertent; Sam had no idea what I was talking about! But you imitate it inadvertently, because it’s so accurate in so many ways. A classic is something you keep going back to. Although the ending is satisfying, you never quite know how you got there. So you go back and you read it again. You go back to the movie and watch it again. You ask: ‘How did I get there? How did I get to that place?’ And of course, that’s the journey. I hope, I hope, I hope it all goes well for the next three episodes — because on paper, I think it worked. It’s a very, very complex and interesting ending to this story.” 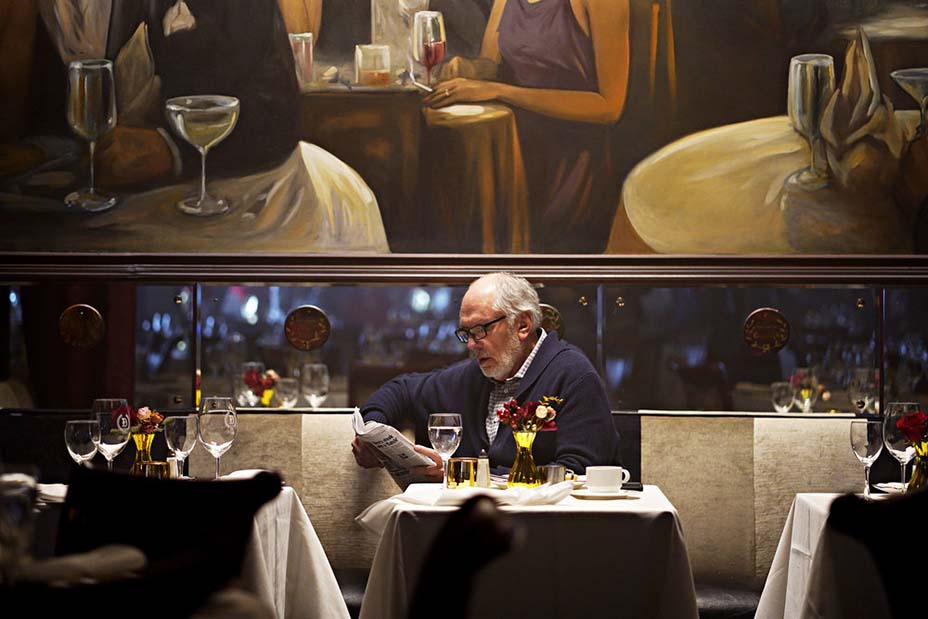