In “403 Forbidden,” directed by Sam Esmail and written by Courtney Looney, the third hour of the fourth and final season finally pulled the curtain back on Zhi Zhang, the Chinese Minister of State Security who often operates under another guise: Whiterose, the puppet master behind the Deus Group, a veritable illuminati so shrouded in secrecy that their existence was only revealed one episode earlier. The Whiterose spotlight takes the action back to New York in 1982 and focuses on a much younger Zhi (Ross Kurt Le) and her lover (Eugene Shaw), who takes her own life upon realizing they will never be able to escape to America and live as their authentic selves.

It’s an extensive sequence, almost 15 minutes in length, with nearly all dialogue entirely in Chinese, and almost powerful enough in its epic, tragic and romantic scope to absolve Whiterose, the person responsible for killing Angela Moss (Portia Doubleday)… almost. Even if absolution is off the table, Esmail hopes the audience at the very least feels the pain at Whiterose’s heart, adding clarity to her future ruthlessness.

“One of my favorite films is Blade Runner,” Esmail tells The Hollywood Reporter. “I always think about that beautiful scene at the end between Rutger Hauer and Harrison Ford. You felt so much for him. It was sweet. It’s this beautiful, tender moment between two guys who were trying to kill each other five minutes before that moment, and you were rooting for Rutger Hauer’s character to die. When you can get the audience into that predicament, where there’s no longer just one goal that you want, it can become richer and more layered, and you’re engaging the viewer on a much more exciting level. It was really important to show Whiterose’s backstory for that reason. She’s not this one-dimensional monster. She’s a person who has gone through so much.” 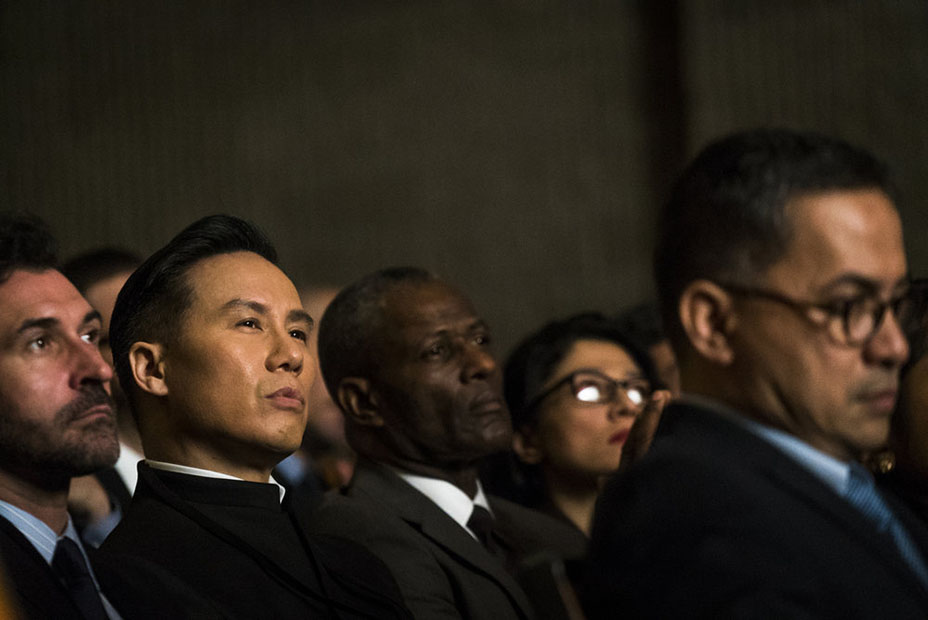 Again, given their adversarial relationship, it’s easy to gloss over the commonalities in Elliot and Whiterose. For instance, Elliot has a literal alternate personality to contend with in Mr. Robot (Christian Slater), and maybe even a second alter ego he’s just starting to learn about. Whiterose, meanwhile, is a woman forced to present to the world as a man. Both of them hide their true faces from society — indeed, both are looking to “f” society in their own rights — and both started their crusades for and against power in their powerful youths. The similarities between the characters aren’t accidents; indeed, as Whiterose would say, there’s no such thing.

“I know it’s a cliché at this point, when the villain says to the hero: ‘You and me are a lot alike,'” says Esmail. “It’s a classic line in every action movie. But if the dynamic between a hero and a villain works, it’s because they can relate to each other. It’s because there’s an attraction — not just that they’re at odds, but there’s an attraction between the two of them. On a deeper level, they actually are going after the same thing. It’s the means that define their differences. That’s for us as an audience to engage with. Diving into Whiterose’s backstory — I hope that without saying that clichéd line, the audience is still seeing it and feeling it.”

As for Whiterose’s ultimate goal? As far as the audience knows, her plans may be as radical as literally hacking time and creating alternate universes. Certainly, Angela Moss died believing in Whiterose’s ability to bridge the gap between the living and the dead. If nothing else, the project is physically massive in scope, with ambitions likely equal in size — ambitions the audience may come to root for before long.

“Anytime you can get the audience to actually root for the villain’s goal is really fascinating,” says Esmail. “Whiterose’s goal — which is to sort of reboot the world in a way, and create a utopic society — there’s nothing wrong with it. It’s the means you question, and the way she’s going about it, and the consequences and the fallout from it. But it’s one of the reasons why Se7en is one of my favorite films. By the end of the film, the villain is asking [the hero] to kill him, and if that happens, he wins. Now you’re rooting for him and against him at the same time. I always find putting the audience in that position really interesting and really engaging. You tend to want to lean in more. You’re so conflicted that it makes you engage on multiple levels. Not just an emotional level, but an intellectual level. When you have the audience there, then you can start to play with expectations from episode to episode.”

Listen to more from Esmail in our special Series Regular podcast dedicated to the final season of Mr. Robot.