Continue to The Hollywood Reporter SKIP AD
You will be redirected back to your article in seconds
Skip to main content
October 9, 2017 12:00pm
Logo text

You can’t put the toothpaste back in the tube — but what if you could?

A much larger version of that question is currently at the core of Mr. Robot, the USA Network drama starring Rami Malek as a lonely computer hacker named Elliot Alderson who quite literally changed the face of his world forever — unless there’s some wiggle room in the idea of “forever,” that is.

Over the course of two seasons, Elliot waged war both on the impossibly powerful global entity called E Corp (which he lovelessly refers to as Evil Corp) as well as the darker personality within himself: Mr. Robot (Christian Slater), Elliot’s most militant impulses, projected into reality in the form of his dead father. It’s complicated. Also complicated: Elliot’s actions, unwittingly leading the movement known as fsociety, which brought both E Corp and civilization to its knees through a massive attack called the Five/Nine Hack. In the current world of Mr. Robot, the global economy is in an astonishingly fragile place, with powerful entities taking the opportunity to snipe at each other all while negotiating the ongoing chaos, raining down like a torrential storm.

At the heart of the storm: Elliot, who exited season two with a bullet lodged in his gut and a clearer understanding than ever of his own culpability in all of this madness. With season three set to premiere Oct. 11, creator Sam Esmail (who once again directs every episode in season three, as he did in season two) tells The Hollywood Reporter that Elliot’s renewed focus will see the troubled protagonist working to clean up the mess he’s made in a more proactive way than we’ve seen previously — assuming the mess can even be cleaned.

“On the surface, I think the main drive of the story is Elliot’s need to fix what he did,” says Esmail. “He faces that tough question: If you have broken something, and in this case he’s broken the system — or as he says, he’s broken the world — can you go back? Can you reverse it? Is it something you can put back together? Or do you have to find another way to get through it? Do you have to find a way to accept that as part of the system, and figure out a way to evolve from there?”

Beyond his desire to put the world back together again, Elliot is forced to reckon with his own fractured self. It’s an even more daunting prospect now than it was in the first two seasons of the series, as the two sides of Elliot have never been in more direct and outspoken opposition with each other. 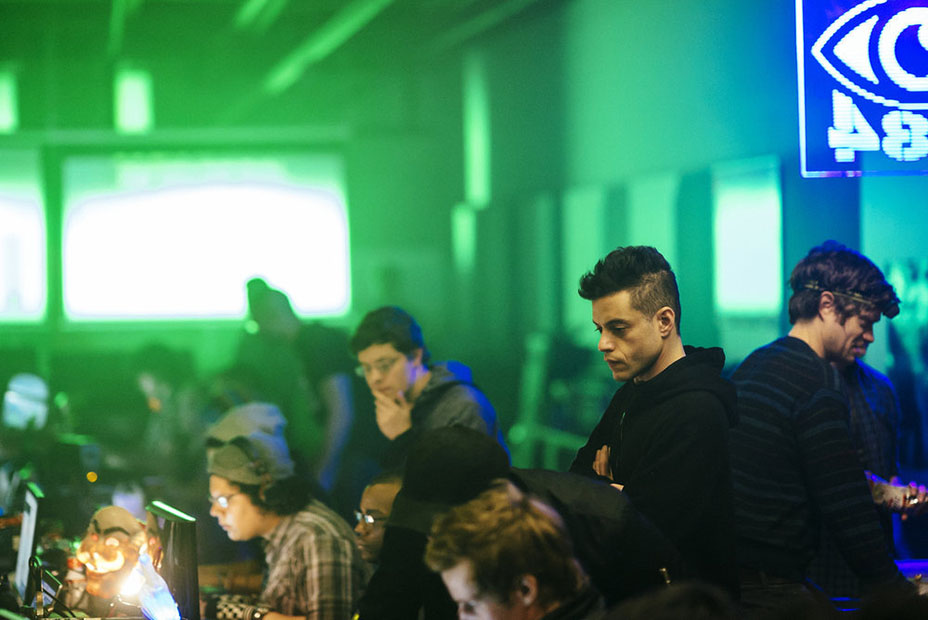 “Like the world he broke, he too is broken, literally,” Esmail says about Elliot’s mental and emotional state in season three. “Elliot and Mr. Robot are completely apart. Much like how he’s trying to solve the world’s problems by essentially trying to pretend it never happened and go back to the way it was, he’s trying to pretend Mr. Robot is no longer there, and moving on with his life. But, again, after going through the realization that he has this condition and he does have this dissociative identity disorder, can he just push it away? Or do you have to go and actually face it at some point?”

Esmail leans on two words as he describes Mr. Robot season three: disintegration and duality. The immediate future of the series will be anchored by the idea of trying to reconcile a fractured whole, not just within Elliot and his efforts toward repairing the world, but also with the cast at large — an ensemble that includes Carly Chaikin as Elliot’s sister Darlene, Portia Doubleday as Elliot’s childhood friend Angela and Martin Wallstrom as the enigmatic Tyrell Wellick.

“So much of what we’re doing on this show is about duality,” says Esmail, “and Elliot represents that for all of the characters.”

In season three, Mr. Robot will clock in at 10 episodes, the same order as season one, shorter than the second season by two full installments. Season two opened up the world of Mr. Robot in a way that allowed viewers to become acquainted with the greater ensemble on a deeper level, including veritable gods like Phillip Price (Michael Cristofer) and Whiterose (BD Wong), the megalomaniacal CEO of E Corp and China’s minister of state security, respectively. This season, with so many players now firmly in place and on the map, and with only 10 episodes to move those pieces on the proverbial board, Esmail says fans should brace themselves for a propulsive punch.

“Because Mr. Robot started out as a feature in my head, I’ve very much structured the story like a three-act film,” he says. “That being the case, the first season was that first act, and there was a lot of setup and introduction of characters. The second season was meant to slow things down and expand on the world and expand on the ensemble nature of the show, because the first season was so fixated on Elliot that there wasn’t a lot of real estate to take that deep dive into the other characters and their inner lives. That all teed it up for this season, where we now see all of these storylines collide. That gives off a propulsive nature.”

Esmail puts it another way: “We’re done with the fun and games, and now we’re ready to kick into higher gear.”

“Honestly, we the writers are never trying to force an agenda on the show or the season,” he adds. “It’s almost always about where we want to go organically next with the story. Elliot is always our guiding light on that. In this instance, the story needed to take off after all of these disparate storylines from last season started to collide.”

Listen to the first episode of our Mr. Robot podcast for more insight into what to expect from season three: