The Leftovers, starring Justin Theroux and Carrie Coon, was a strange and surreal meditation on grief and transformation in the face of overwhelming loss. For his next act, author Tom Perrotta returns to HBO on Oct. 27 (sharing Sunday nights with Leftovers collaborator Damon Lindelof’s Watchmen) as the chief architect behind Mrs. Fletcher, based on his novel of the same name — and while the series lacks a globally seismic event like “the Sudden Departure,” Perrotta’s first turn as showrunner nonetheless returns to those same universal themes of grief and transformation.

“I didn’t realize how much that would impact me, what it would feel like,” he tells The Hollywood Reporter. “So there’s an autobiographical component, but obviously, I’m not Mrs. Fletcher!”

Beyond his interest in exploring the story of an “empty nester,” Perrotta says he felt “an ongoing interest in the way the rules of sex and gender were being rewritten in the culture as a whole.” In the scope of Mrs. Fletcher, Perrotta explores that culture through the lens of Eve Fletcher, but also through Brendan, who gradually realizes his high school lifestyle doesn’t fit neatly in his new environment.

Ahead, Perrotta opens up to THR about stepping into the showrunner shoes for Mrs. Fletcher, working with Hahn and much more — including Descendants actor Cameron Boyce, who died in July at the age of 20, and who appears on Mrs. Fletcher in one of his final roles.

What was your experience in leading the charge on adapting Mrs. Fletcher for television? When you were writing the book, was an adaptation ever on your mind?

No, I never [imagine] that. For me, writing a book is so complicated. The problems I face are so specific to the medium of a book. What’s the next sentence going to be? There’s no value in trying to imagine the life this thing would take in another medium before it finds its first form.

One thing I was not prepared for was how all-consuming it is to be a showrunner. With The Leftovers, Damon was the showrunner. I was really part of the writers’ room, but I could come and go. I would come for two weeks, and then I would go home for a week. For the most part, I wasn’t on set. I wasn’t in the editing room. It was a compartmentalized job. Here, this job means having responsibility for every aspect of the show. I was on set almost every day, and I was in post every single day. It took up so much more time. It was so much more consuming. I had to learn on the job. It’s one of those jobs you really can’t quite know what it is until you’re in it, doing it.

How did that impact you, as far as adapting your own material — going back to the novel and deciding what to keep and what to change?

My whole screenwriting career has been adapting my own work, so it’s something I’ve gotten used to over the years. It’s one of the reasons I like collaborating with other people; it helps to push me away from decisions I’ve made before. I do think you have to move away, you do have to shake it up, and you do have to allow something new to take shape. Especially at the beginning of the process, I said, “This book is not a bible. Anything that’s in here can be questioned. Anything in here can be modified.” But with that said, I think Mrs. Fletcher ended up as a more straightforward adaptation of the novel than The Leftovers, which was very loose in a great way. It reflected so much of Damon’s vision. This one ultimately did not depart too far from the book. We have entire episodes that aren’t in the book, though. I like that. We created a space where we could tell new stories within it.

Kathryn Hahn is tasked with bringing the central role to life. What was your collaboration process like?

It was amazing. She was so riveting, every single day. I remember toward the end of the shoot, I was talking to the head grip, who said to me, “Man, she is amazing.” Even the electricians would notice how great she is. (Laughs) Usually, they’re just doing their job! They aren’t thinking as much about what’s being filmed. But everyone was so aware that something special was happening with her. From my own perspective, she brought a level of intensity and commitment that was fascinating and really challenging. She had very clear ideas of who she thought the character was. I ended up listening a lot to the feelings she had, partly because she has the seismograph for what’s true, and if she feels that a moment isn’t true — I can sense that it pains her to do it. I just started relying on her take on it, line by line and action by action. It was great to leave her with a lot of freedom to explore between the lines in the script. It was always a revelation. 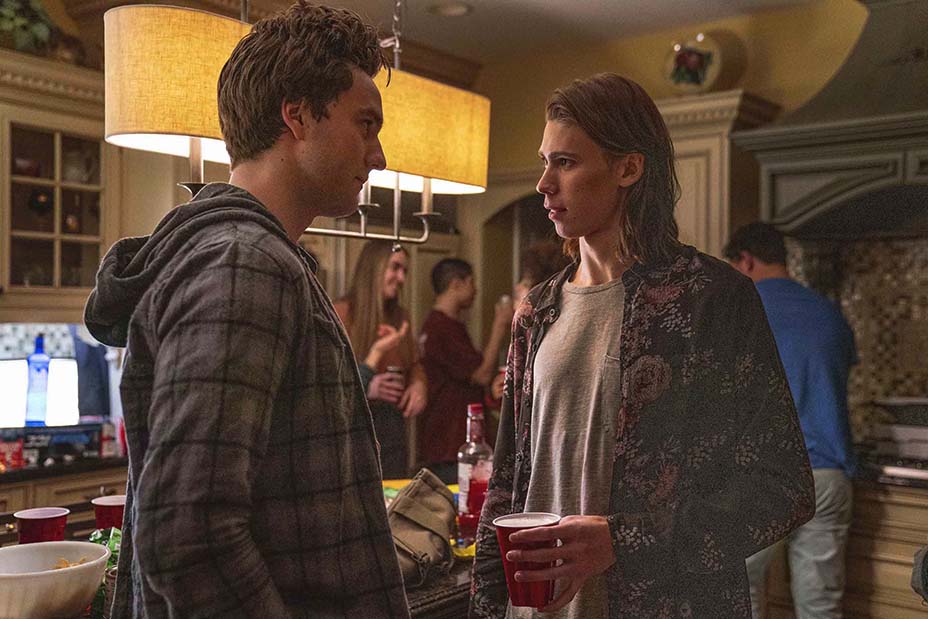 There are almost two shows within the show: Eve’s storyline, and there’s Jackson White as her son Brendan, who is not adjusting easily to college — certainly not after living such a large and largely unchecked existence in high school. What were you hoping to express with his storyline?

The late Cameron Boyce provides a great supporting role in the series as Brendan’s roommate, Zach. What are some of your memories from working with him?

He was such a great person to work with. I had no idea what a star he was. I think I was a little too old and my kids weren’t watching Disney during his era. He auditioned for the role, and I immediately felt he was so great for it. But I didn’t understand yet who he was in the wider culture. I wouldn’t have known it from the way he handled himself on set. He was such a pleasure to work with. It was a supporting role, but it was an important role, and he made every moment count. There were so many times where he and Jackson improvised around the script, and he was always so great at that. They really developed a great bond together. There’s that first scene in the pilot, where Brendan just wants his mother to leave the dorm room after she drops him off. She’s freaking out and trying to get lunch with him, but Brendan’s just blowing her off. If you watch what Cameron does with every single one of those little moments — the way he’s so attentive to Eve — you very quickly realize his talent. When we got into the editing room and saw what he had done with these small moments, we really understood what an immensely talented and nuanced actor he was. I’m still shocked and speechless about the fact that he’s gone. My heart goes out to his family.

Your writing expresses an interest in exploring people at moments of transformation, who people become in the face of inevitable change. Do you find yourself actively drawn to those moments?

You can’t have a story without that moment. Even if it’s a small moment, you need to find out where it is and allow it to happen. Of all my novels, Mrs. Fletcher is most clearly about that. I think it’s the one story I have where the character’s name is the title. This really is an investigation of what it means to be Mrs. Fletcher, and what it means to leave Mrs. Fletcher behind. Because of that, it made sense to tell a lot of satellite stories about people in their own journeys of transformation.

Speaking of leaving Mrs. Fletcher behind, this is described as a limited series. Do you envision ever returning to these characters and this world?

It is a limited series, but endings are arbitrary. The characters have lives that extend beyond this moment. I can certainly imagine other stories to tell with them.

Without spoiling the ending, I do wonder what’s next after that final scene…

I know. (Big laugh) I’m glad you’re thinking about that. Let me know if anything occurs to you!