This is the latest in an ongoing series of one-on-ones with the political pundits who have been at the forefront of the cable-news conversations this election season. The interview was edited down for brevity, but you can hear the entire 35-minute conversation here.

The host of MSNBC’s The Last Word with Lawrence O’Donnell is preparing to leave for Malawi, as part of his mission with The KIND Fund. Through support of his viewers, Lawrence has raised more than $10 million to provide jobs, desks and scholarships for students in Malawi.

Beyond his charity work in Africa, O’Donnell has a storied professional past, having studied economics at Harvard College, worked in the Senate (that brought about a “complete accident” of actually using his degree), and even writing on one of television’s biggest political dramas, The West Wing.

Age: Mid-60s (“I stopped observing birthdays a long time ago”).
Current Residence: I’m not sure. I live in L.A., but I work in New York City. I consider myself to live in Los Angeles; I might be the only person who thinks that about me.
Education: I went to Harvard College, grew up in Boston, and went to high school in Boston. I majored in economics in college. Certain things were just out, like chemistry or biology, or science or math, that was just out of the question. That’s just an aptitude impossibility, I couldn’t have done it.
Network: MSNBC

You (and Rachel Maddow) tend to take what I call “the scenic route,” often offering historical context to getting into the story of the day. I’m curious about the process for preparing for The Last Word with Lawrence O’Donnell.

I still consider my job to be “writer,” and the show I’m writing now isn’t fictional, but it’s this news show every night. I have the most painful deadlines I’ve ever had, which are: live TV.

There’s a wonderful line from Lorne Michaels that he said to me in the elevator at 30 Rock about SNL: “We don’t do it because we’re ready, we do it because it’s 11:30.” He said that to me a few years ago when I was complaining about how difficult it was to go on at 10 p.m. when I’m not ready.

I have those words in my head all the time. I used to approach panic at 9:30 p.m., thinking “this can’t be done. I don’t know what the words are!” [Outside of the discussion and questions] anything that should be scripted, in my mind, must be scripted. There’s no option to that. It’d be inconceivable for an actor on The West Wing to just invent a line about the debt ceiling. You can’t do that. So it’s been very hard for me to not think in those terms, but now I know that Lorne’s right, and at 10 o’clock it’s not that I’m ready, but it’s 10 o’clock.

Every once in a while when there’s a blank spot in the script, I’ll say to the control room “don’t worry, I’ll think of something.” I couldn’t have possibly said that for the first three years of the show.

What is a common misconception about being a pundit?

One of the things that I see on Twitter is that people think they know what you think abut things you haven’t discussed. Because they think if you are pro-choice, for example, then there are a bunch of other positions that you must hold, like you are for higher taxes for the rich are something. In my case, both of those things are true, but there’s all sorts of things on the show that I’ve never discussed because they’ve never fit the sort of subject heading of what we’re doing that night.

We have to ask about the election. What do you think the polls got so wrong this electorate?

The truth is the polls didn’t get a lot wrong. They said that it was going to be a three-point race, the margin of error is three points, so when you have a three point race, that’s a tie. And so it can go either way. Polling has become increasingly hard, every year polling gets harder because fewer and fewer people are accessible to be polled. And fewer and fewer people respond or they hang up on you. So it’s becoming a less reliable exercise. And let’s not forget, Hillary Clinton did get the most votes, which is what the polls said was going to happen. So this is a complicated one.

What concerns do you have about a president who is so vocal and critical of the media?

The First Amendment protects the news media and the news media knows how to use it. Donald Trump doesn’t understand it, he’s never going to understand it. The concern that is real is that in the world of corporate media, how comfortable can corporations be in some kind of freedom of criticism of the Trump presidency.

For example, Fox News had nothing to worry about attacking the Obama presidency every single day because responsible, decent people work in the Obama [administration]. It would never occur to anyone to take some kind of regulatory retaliation to the Fox Corporation. It would probably occur to most people in a Trump administration, including Donald Trump, to take some sort of regulatory retaliation to any large corporate media entity that has any branch of it that’s in criticism of the Trump administration. That is a new condition that the modern corporate media has never ever had to deal with.

Donald Trump brags about being litigious. The older backbones of the American news media like The New York Times and The Washington Post are going to continue to do their jobs without any fear of doing their jobs.

What is The KIND Fund?

The KIND Fund is Kids In Need of Desks. [This] week I’m going to Africa, to Malawi, to deliver desks to schools there. We have factories in Malawi now that are making these desks. So first of all it’s a job program for people in Malawi to work in these factories making desks, desperately needed jobs.

Then we deliver desks to schools where they’ve never seen desks. Most schools in Malawi don’t have desks, that’s very common in for the poor African countries. I’ve been doing this for six years now, and it’s really changed dramatically the entire economic atmosphere in the schools that we’ve been able to supply with desks. 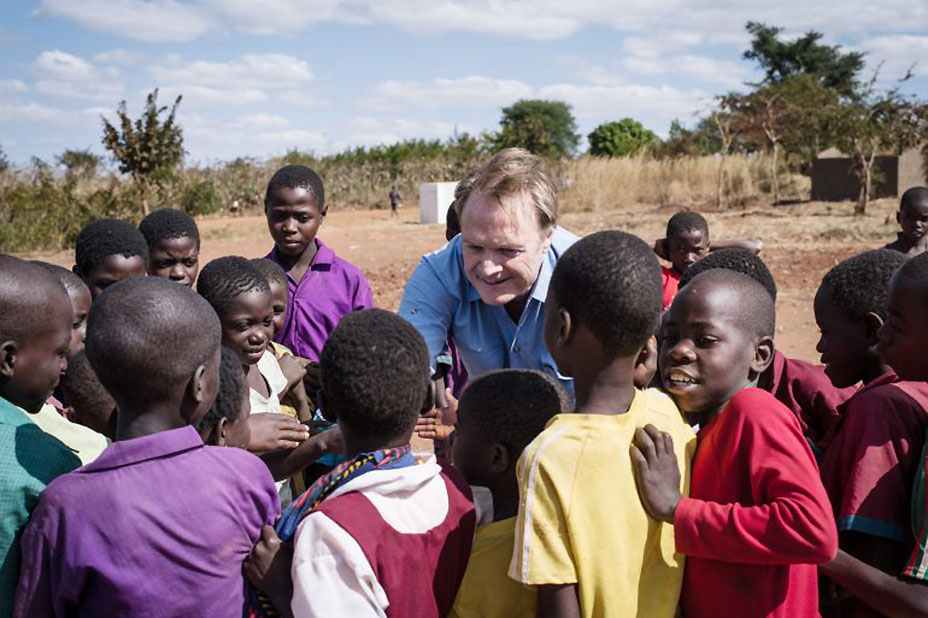 It sounds like The KIND Fund is something you kind of stumbled upon. What were your expectations for it as opposed to what it’s become today?

I did stumble upon it, because a friend of mine was returning from Malawi, and she’s a public school teacher so she goes to schools and had asked the schools what they’d needed. They told her chairs (or desks).

A couple of months later, I had a week where I had no obligations, and I decided to go to Malawi and see if I could get desks for the schools. After a couple of days I thought I was going to be able to do nothing, there are no school supply stores, there were no desk factories, nothing. But I did find one hardware store where there was a guy who made a school desk as a way to show what his tools could do to try and sell tools, and hope at some point the Ministry of Education might turn somewhere to try to get more desks in schools and he would be ready to make some.

I found him. He told me could make a classroom full of desks and deliver them by the Friday of that week, and that was the first delivery we ever did. It completely changed that classroom instantly. It was really exciting.

I told that story on the air, in the hope that the audience would willing to help out and maybe we’d get $50,000, which would be huge! In that first month of me talking about it, the audience contributed $2 million and we were off and running.