Continue to The Hollywood Reporter SKIP AD
You will be redirected back to your article in seconds
Skip to main content
November 18, 2018 9:15am

[This story contains spoilers from the fifth episode of Netflix’s Narcos: Mexico.]

Welcome to the Narcos universe.

Narcos: Mexico reset the cartel series and traveled back in time in order to show the origins of the Mexican drug war. But halfway through the season, the Netflix drama featured a crossover episode that officially connected the new chapter to Narcos‘ past.

In the fifth episode of Narcos: Mexico (all 10 episodes are currently streaming), Guadalajara cartel boss Felix Gallardo (played by Diego Luna) seizes on a business opportunity. The Caribbean cocaine pipeline had been exposed and the Colombian cartels needed a new route to smuggle their product into the United States, where demand continues to drive supply.

Why not use the Tijuana corridor, where they traffic marijuana to U.S. border cities, to get cocaine to the States? “Your cocaine and my distribution” is the pitch that Felix Gallardo presents, in person, to both the Cali cartel bosses — and Pablo Escobar. The pitch, which will define the drug war for years to come, provided Narcos showrunner Eric Newman the opportunity to bring back three of the Cali godfathers and the infamous Escobar himself, played by returning star Wagner Moura.

“I’ve always sort of seen this as of the Marvel superhero universe of connecting narcotraffickers, and that they all coexist,” Newman tells The Hollywood Reporter of the high-profile cast returns. “What traveling back in time did was that it also gave us the opportunity to check in on some of these guys that we miss.”

Newman had hinted that surprises might be in store when discussing how Mexico planned to travel back to the 1980s to show the origins of the country’s first cartel, Guadalajara. Under Felix’s leadership, the criminal “plazas” across Mexico formed a well established, collaborative network that began by trafficking marijuana and, eventually, ran concurrently with the Colombian cartels to move cocaine. Though Mexico began in the late 1970s, the episodes eventually catch up to the early ’80s, running parallel to the Colombian stories that were told in the first three seasons of the series. (Mexico is technically the fourth season overall.) The fifth episode is when all the cartels sync up.

In the episode, Narcos: Mexico follows Felix to Colombia where he first pitches three of the four Cali bosses, Miguel Rodriguez (Francisco Denis), Pacho Herrera (Alberto Ammann) and Chepe Santacruz Londono (Pepe Rapazote) in 1983. Damian Alcazar, who plays Gilberto Rodriguez in the series, had a scheduling conflict but the return of Pacho makes the character the only one to appear in all Narcos seasons, Newman points out. At the time, the Cali cartel was on the rise, but they were still nipping at the heels of Escobar and his Medellin cartel. Felix tells Cali that this partnership will help them topple Medellin once and for all, and the Cali bosses happily shake hands on the deal. But not before pointing out that Felix is entering a $4 billion-dollar business: “The higher the value, the higher the stakes.” 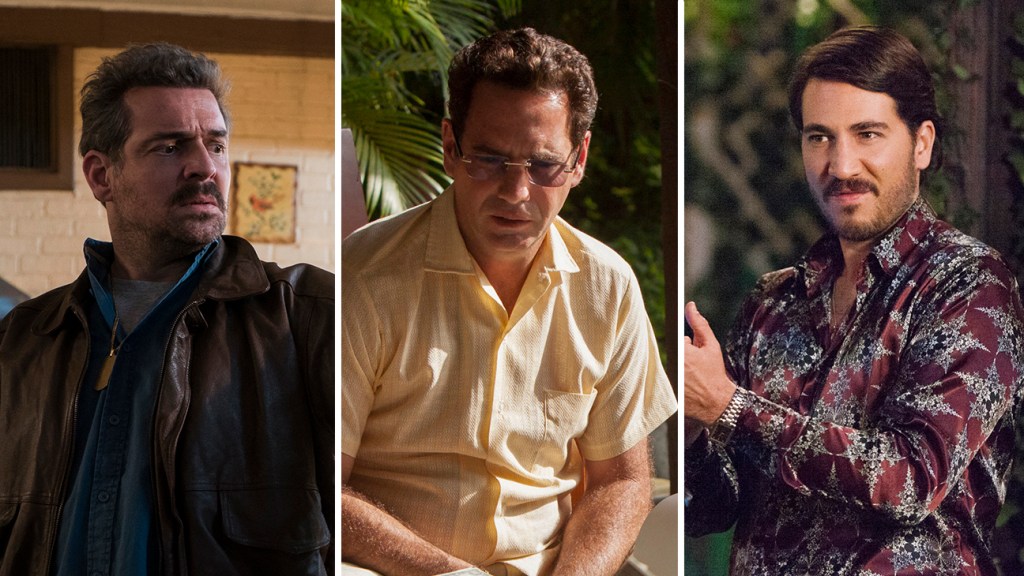 Before Felix can leave the country, two of Escobar’s men, the familiar Blackie (Julian Díaz) and Poison (Jorge A. Jimenez), grab him and take him to speak with the boss. He had been warned that Escobar and his “big emotions” would not like the idea of missing out on the deal, and as it turns out, that assumption was correct. Felix is driven out to an Escobar compound and, after much suspense, the notorious kingpin appears for a secluded sitdown with a fish-out-of-water Felix to ask him why he is in Colombia. When Felix fills Escobar in on his Cali arrangement, the Medellin boss decides that he, too, wants a piece of Felix’s pipeline.

“If we’re being honest, this will put you out of business,” Felix told him. “I could feed you to the hippos. I don’t like Mexicans, if we’re being honest,” is Escobar’s response. But Felix maintains his head, which impresses Escobar. He again warns Felix that cocaine is a different game. Why does he want to do it? “We have to control this fucking world or it will control you,” Felix answers. The 10-minute scene, which they filmed in one night outside of Mexico City, highlights both what connects and differentiates the two narcos. Escobar tells Felix that his cartel will join the pipeline, and that the business will be 50-50 between Medellin and Cali. 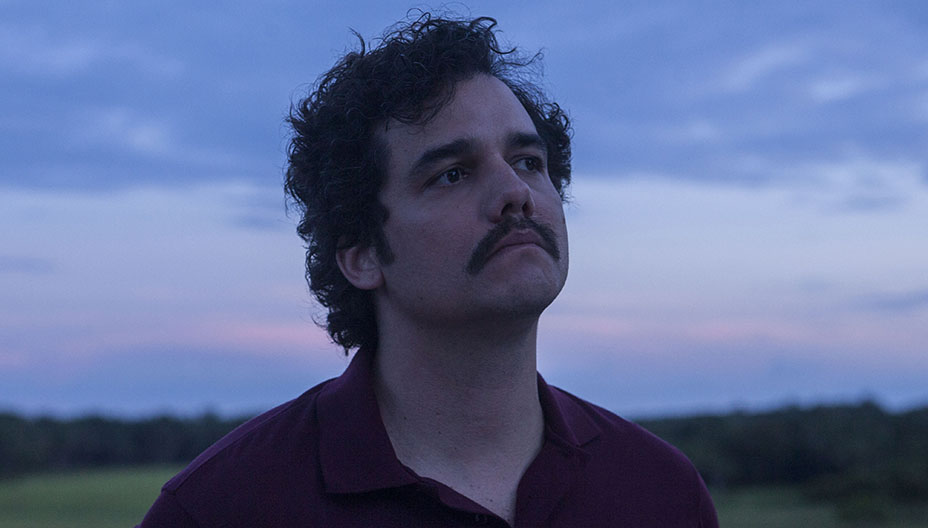 The three-way partnership, where the “OGs” give Felix their seal of approval, is what Newman calls a passing-of-the-torch moment. That significance is what made the ask for the stars to return an easy one. “Wagner Moura’s portrayal of Pablo Escobar is just spectacular,” Newman says. “I was thrilled by the idea and Wagner got it, certainly, and the Cali guys got it. Everybody was like, ‘Oh yeah, of course. Let’s do it.'”

After starring in the first two seasons of Narcos, Moura put his critically acclaimed, larger-than-life portrayal of Escobar to bed. The second season ended with Escobar’s death in ’93 and Moura spoke openly about both the beauty of finishing his journey as Pablo and the intensity that came with immersing himself in the character for more than two years. When he reappears in Narcos: Mexico, Escobar is slimmer than viewers will remember. To accurately portray Escobar in his final days, Moura packed on 40 pounds.

Bringing back Moura for the crossover was always in Newman’s plan. “He’s such a smart, intuitive actor,” Newman says. “I wrote the scene and then, like the old days, we would sit and go through it and make changes and edits. When we’re sitting there, going through the pages and working on it, it immediately felt special.”

For Luna, who had worked with Moura in 2013’s Elysium, the Narcos: Mexico star also relished in seeing Moura revive the character. “He does amazing work on bringing this guy to life,” Luna tells THR. “As an actor, technically, with the physical approach he had with the character, the voice and everything. It was cool to witness that. Even though we always said Narcos: Mexico is not season four and that is another and a different story, they complement each other pretty well. And that moment was fun for me as a friend and as an actor to share with him and with the other guys from season three.”

Narcos: Mexico will bring the new Narcos timeline up to the mid-1980s. Escobar died in ’93 and the Cali bosses reigned until 1996. The series has yet to be renewed, but Newman wouldn’t rule out more chances to crossover the cartels if they do return. “We’ll see if someone lets me do it,” he says.

How Past 'Narcos' Seasons Play Into 'Mexico' Timeline

Narcos: Mexico is currently streaming all 10 episodes on Netflix. Keep up with THR‘s show coverage here.