[This story contains spoilers from the entire second season of Netflix’s Narcos: Mexico.]

In the second season of Narcos: Mexico, Joaquín “El Chapo” Guzmán is just getting his start.

In present time, the notorious criminal career of the Mexican drug lord came to an end when Guzmán was sentenced to life in prison in the summer of 2019. But in the late 1980s — which is when the second season of the Netflix cartel series is set — El Chapo is a rising player eyeing his place atop the Sinaloa cartel.

“I believe we see Joaquín Guzmán showing ambition in season two,” Alejandro Edda, the actor who has portrayed El Chapo for two seasons of the Narcos: Mexico spinoff, tells The Hollywood Reporter. “I believe it comes from his own childhood and wanting to be that man, that provider. He had the ambition to be a boss; he had ideas. You hear him telling his mother in that one scene, ‘They don’t listen to me’ and ‘they don’t respect my ideas.’ But he knows that he has these ideas and can take them far, and that’s what history entails. Now to get a seat on that table, it means a lot. The journey that Chapo had, it’s quite cinematic, to tell you the truth.”

After first taking some liberties and introducing El Chapo as the driver for the boss of the Guadalajara cartel, Felix Gallardo (Diego Luna), in the first season, the second season shows El Chapo acting on one of his big ideas when he builds his first tunnel beneath the U.S.-Mexico border. “One place Americans don’t look is underground,” he says.

Ultimately, warring over power and territory leads to the Tijuana cartel blowing up El Chapo’s tunnel, but the seed had been planted. And by the end of the season, El Chapo steps up to represent the Sinaloa cartel when Felix’s plaza system falls apart — which means Edda will be stepping into an even bigger role if Narcos: Mexico returns (Netflix has yet to renew the series for a third season, though the creative team has plans for more.)

For Edda, who never even auditioned for the role of El Chapo, the experience of co-starring on Narcos as a major player has provided for his own personal journey. “I had been auditioning for Narcos for the past four years. It wasn’t like I just went and read for El Chapo Guzmán — it’s been a process since the show started in 2014,” says Edda, who was born in Puebla, Mexico, and now lives in Los Angeles. “They started calling Latino actors for this new upcoming Latino-themed show that would be shot in Colombia. The casting director, Carla Hool, who has made the careers for many Mexican actors, was in charge of the audition process. As a Mexican actor, I knew how important she was.”

After reading for several small parts for the first Colombia-set seasons of Narcos, it wasn’t until Narcos: Mexico came along years later that Edda finally read for the series regular roles of Kiki Camarena (which went to Michael Peña) and Rafa Quintero (which went to Tenoch Huerta). “A week and a half later, I had that magical moment,” he recalls. “I received the call from my team and they wanted to offer me the role of El Chapo Guzmán. And I couldn’t believe it. I was looking at myself in the mirror and thinking, ‘I don’t even look like him.'”

Edda spent long hours with the makeup and hair team to physically transform into El Chapo, and he worked on his vocabulary to make his portrayal as authentic as possible. But then, between seasons one and two, the actor had more good fortune when he was able to observe the man he was playing in real life.

“I was there for two days in court during his criminal trial,” says Edda. “Life imitates art, right? You can’t plan that.” 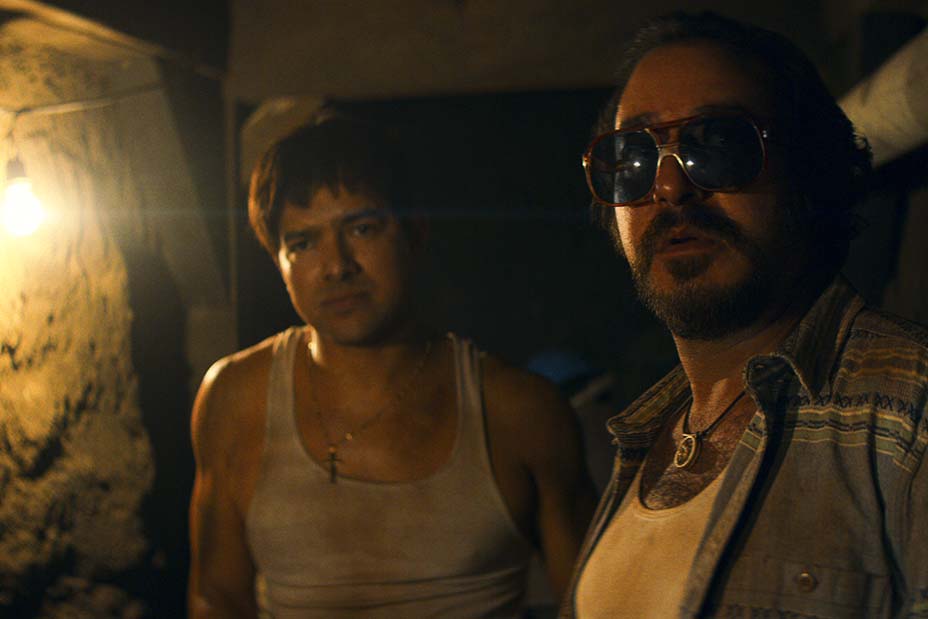 Showrunner Eric Newman had attended Guzmán’s Brooklyn trial for research, but when Edda arrived, a courtroom interaction between Guzmán and the actor turned his visit into headline news.

“I never told anybody that I was the actor who was playing him. But when you arrive, there are at least five hours of waiting and there was one outlet who knew, and they started spreading the news,” recalls Edda. “So when it came out it became a little bit like a circus. And then when they introduced me to his lawyers, the lawyers were the ones who told Chapo. When he came out of the room and was about to take his seat, the lawyers told him. So he looked at me, stood up and waved at me with a big smile. That was a surreal moment! To have this awkward interruption of fiction and I don’t know. It was weird. A story I will tell my grandkids!”

Diego Luna on the "Big Picture" Message Behind His Final 'Narcos: Mexico' Scene

But aside from their momentary interaction, Edda says he gained insight into Chapo that he was able to bring to the character for season two. “The first day that I was there, he spoke for the first time I think in two months, or since the trial had began. So when he spoke and I could hear his voice, I felt, ‘OK, I’m on the right track,'” he says. “And the other thing that really struck me was how calm he was. I don’t think he was really grasping the whole thing. So I was really surprised by that. You could tell he was relaxed.”

He continues, “And he was writing a lot, and I was very intrigued about what he was writing. I could see things like if he was right-handed or left-handed, little movements and things like that. I ended up coming back from New York and straight into production on the season and there was something in me where I just felt a little more secure and like I could apply these choices. Like this experience I had would help me and I hoped it would help the show to be as authentic as possible.”

Those observations were enough for Edda, who never had any intention of reaching out directly to Guzmán. And even though Newman has said he heard Guzmán was a fan of the earlier seasons of Narcos, the actor hasn’t heard any response regarding Narcos: Mexico. (“I don’t think he is permitted to have a TV in his cell,” he adds.) 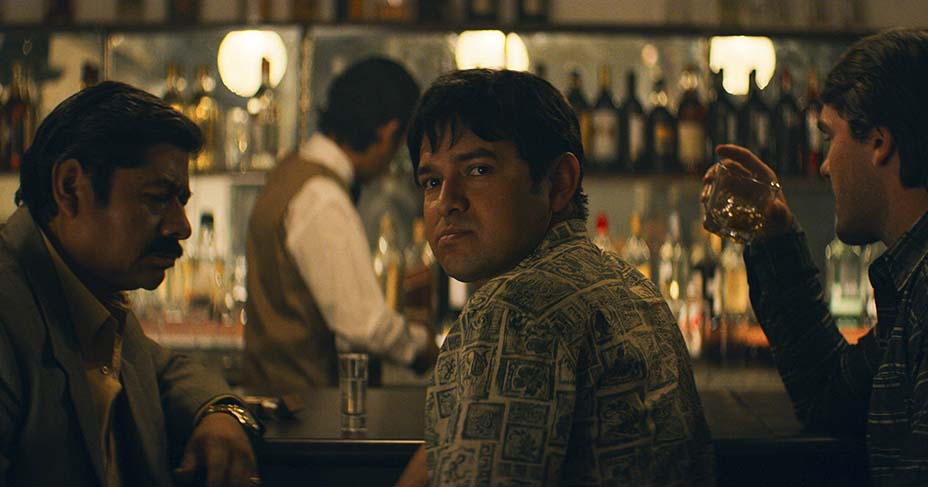 With season two now streaming, Edda says he is able to shut out the outside pressure of playing such a notorious figure. And while he hasn’t yet had any discussions with Newman about what Chapo’s future in the franchise could look like — “I’m just crossing my fingers that there’s another season!” he says when asked about spinoff talks — he is hopeful that the Narcos journey will continue.

“Narcos is not about one guy, which I love. It’s not about the story of Chapo. It’s really about that whole world; the guys with the badges and the narcos and narcas,” he says. “For me to think along the lines of what happens next with Joaquin Guzmán, there are so many stories — the escape, prison, both of them. But I really want to tap into the idea of how the presidents of the countries are talking to these guys. Can you imagine the president saying, ‘Hey, come to my ranch. We’ll talk business here’? That’s true and hopefully they will show this. We have to know that these people who we vote for are not as white-collar as they appear. They have their own tale.”

And whatever lies ahead for Chapo on Narcos, Edda says he will continue to approach the character with the same mindset. “I have never judged him. There are a lot of poor people who don’t want to be poor. There’s a famous quote in a movie: ‘I’ve been poor and I’ve been rich, I don’t want to be poor.’ Chapo probably experienced that growing up,” he says. “There are Chapos in every one of us. We’re all underdogs.”

'Narcos: Mexico': Scoot McNairy on How His Secret Role Comes to Life in Season 2