[This story contains spoilers from the season one finale of Netflix’s Narcos: Mexico.]

James Kuykendall had a very unique experience of watching Netflix’s Narcos: Mexico. The retired DEA agent — who is portrayed by Matt Letscher on the newest season in the drug cartel series — was reliving the period in his life when a fellow agent, Kiki Camarena, was abducted, tortured and killed while on assignment with him in Mexico.

“The final episodes brought back some bad memories, especially when they actually picked him up,” Kuykendall tells The Hollywood Reporter of Narcos: Mexico retelling Camarena’s real-life story. Camarena, who is portrayed by Michael Pena on the series, was taken by Miguel Angel Felix Gallardo (played by Diego Luna), the boss of the Guadalajara cartel, and his men in broad daylight in Guadalajara. “The whole idea that that could happen and exist blew my mind then and it still does today.”

Kuykendall, who was the agent in charge when Camarena was killed in 1985, served as a consultant on Narcos: Mexico. Javier Pena, the retired DEA agent who consulted on the first three seasons of Narcos — and who was portrayed by Pedro Pascal — connected Kuykendall with Eric Newman and the other executive producers of Narcos. Over the course of many conversations, and a visit to the show’s Mexico City set, Kuykendall shared detail after detail from his time in Guadalajara.

“I wanted it to be as accurate as possible, and I knew that they were going to take many liberties,” Kuykendall says of the show, which Newman has previously characterized as 50-50 when it comes to fiction and non-fiction. “I was especially anxious that they portray the DEA agents in a respectful manner, and they did. I also wanted it to be very obvious that the corruption in the Mexican government created the atmosphere that allowed the narco crimes to happen. But the big thing was the kidnapping and murder of a U.S. official operating in Mexico who was under official Mexican protection. And it happened with the collusion of Mexican officials in every level of the government.”

How 'Narcos' Upped the Ante for Season 2 With 'Mexico' Finale

Narcos: Mexico, which is the fourth season overall in the Narcos universe, was a reset. After the first three seasons explored the Colombian narco kingpins, including Pablo Escobar, Narcos: Mexico traveled back in the show’s timeline to 1980s Mexico in order to develop the origins of Mexico’s first cartel, Guadalajara, and the birth of the drug war that continues on today. The season bowed on Nov. 16 and has already been renewed for a second season.

The story of Camarena’s death is well-documented, as it remains a pivotal moment in history for America and Mexico, and the war on drugs. Elaine Shannon’s acclaimed book Desperados: Latin Drug Lords, U.S. Lawmen, and the War America Can’t Win served as another resource for the season, in addition to cooperation from family members, agents and politicians who were closely connected. Kuykendall — who himself published a first-person account titled O Plata O Plomo? “Silver or Lead?” — was the primary witness in the first of the later three trials of the murder suspects in Camarena’s death. He also testified in the second trial.

Narcos: Mexico characterizes Camarena’s death as the moment in time that woke America up about the Mexican drug war. The DEA had only been established years earlier, in 1973, and the agents on the ground had little resources and support. Similar to the show’s portrayal of their unit, there were four agents working in Guadalajara when Camarena died.

“Along with the Mexican government being embarrassed by their collusion and complicity, the DEA was embarrassed. Because we had not been remiss in reporting the dominance of the drug traffickers in that area of Mexico,” Kuykendall says of the shift after Camarena. “We had reported for a very long period of time the danger that the agents were facing, threats and very obvious instances of physical actions taken against us. Afterward, the DEA took a completely different approach to everything. When you go overseas now, they teach the proper thing to do when something like this does happen. It was always in peoples’ minds beforehand, but it was never something that they tried to prepare you for.” 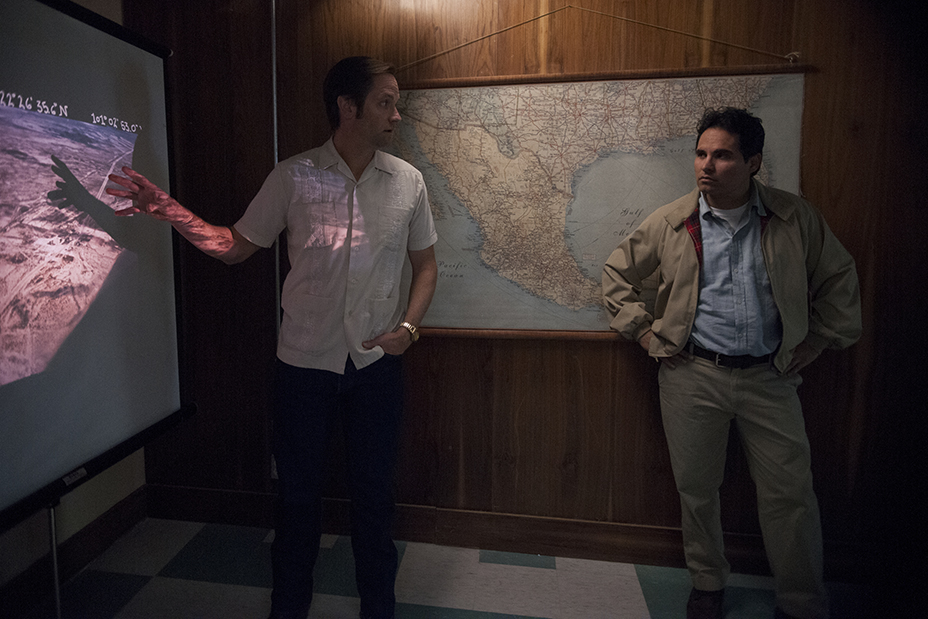 Camarena’s fate plays out in tragic detail on Narcos: Mexico as he is tortured by Gallardo’s men and a doctor, who pumps him with adrenaline so he can continue to withstand the beatings. While he is missing, the show follows Kuykendall and Camarena’s wife, Mika (Alyssa Diaz), in their futile struggle to get him back. After his body is found, the finale introduces Operation Layenda, the task force that would bring about indictments for those responsible for Camarena’s death. That is also the moment that the show’s English-speaking narrator steps into the story to reveal himself as the new DEA agent in charge named Walt Breslin (played by season two star Scoot McNairy).

Kuykendall says Operation Layenda began right after Camarena was kidnapped and that Walt represents an amalgamation of the agents who come on board to run the investigation in Mexico. “I can’t think of anyone like that, a wild cowboy who runs into Mexico to start capturing people,” Kuykendall says. “By the time the bodies [of Camarena and DEA pilot Alfredo Zavala] were found, there were agents in DEA headquarters who were assigned to be Operation Layenda investigators and there was one agent who was the head of that. That leadership changed several times from the period that began and up until and including the trial. There were probably four or five different agents in charge, and you had Operation Layenda agents in Washington, D.C., San Diego and Los Angeles.”

McNairy and returning star Luna have been set as the leads for the second season, which means McNairy’s Walt will be the first DEA star of the series who isn’t portraying a former agent. (Boyd Holbrook played agent Steve Murphy on the first two seasons.) When the season ends, Gallardo strikes a deal with Mexican police commander Guillermo Gonzalez Calderoni: his freedom in exchange for two of the seven tapes recorded during Camarena’s torturing where he identified corrupt players in the Mexican police and government. The deal is granted and Gallardo remains in charge of his growing cartel organization, setting up Luna’s continued role next season.

Those tapes eventually go on to play a major role in the trials. “I would say that it was a turning point,” Kuykendall says of the Camarena recordings. “The trials were in Los Angeles and they were able to translate the tapes, both the audio and the video, and while the tapes were playing they displayed the words in English and Spanish to the jury in the courtroom. And it had a tremendous emotional effect.”

As for how Gallardo’s capture will go down, that remains to be seen on Narcos: Mexico season two, which is already in production in Mexico City. Today, Gallardo is serving out a 37-year prison sentence for the death of Camarena. “The show indicates that he almost got picked up, but we never found him in 1985,” says Kuykendall, who left Mexico in September of that year and retired in 1989. “I think it got to the point where he was hiding most of the time and I don’t think he left Mexico. In talking to people who were still doing the job, he got picked up by the military in the latter part of 1988 and was released. When they do pick him up in 1989, you can see he was not living in a luxury mansion anymore. I don’t think he was married to the same woman. If it interested him that much to find out that Kiki didn’t know the answers to what they wanted to know that they were willing to sacrifice everything for it, well then I guess they got what they wanted. But it didn’t pay off.”

Gallardo is portrayed as a much different boss than the Colombian kingpins who came before him on Narcos. Kuykendall says the real Gallardo is best captured in Luna’s portrayal in the middle of the season. “He was quiet. He was not boisterous. He had two hotels, they were not luxury hotels. He didn’t hide from the public, but then he didn’t have to because they were protecting him. He wasn’t flashy, but he was making a lot of money and spending a lot of money,” he says. “In the beginning, the character was a little quiet and noncommittal. And then in the end, too violent. Somewhere in the middle, you have the proper treatment for the guy. But was he capable of doing the crime? Yes, he was.”

When Gallardo and the Guadalajara cartel eventually fall, others rise. A minor character on the season is Joaquin “El Chapo” Guzman (played by Alejandro Edda), who is currently on trial and accused of leading Mexico’s Sinaloa cartel. But Chapo did not get his start as a driver for Gallardo like Narcos: Mexico portrays. “That’s something they did to set him up for the future,” Kuykendall says. Narcos: Mexico crossed over with Escobar and the four Cali cartel bosses of season three, who were warring for control at the time, to show how Colombia used Mexico’s distribution to smuggle their drugs into America. That surprise crossover opens the door for Narcos to continue to explore Colombia cartels, like the North Valley cartel, but Kuykendall says there is much more of the Mexico story to unfold: “It’s pretty obvious that they have Chapo in there because they intend to go further with that part of the story. Considering that you have a trial going on in New York and maybe several to follow that, that’s going to fit right in. And then there are so many other drug trafficking armies at work in Mexico that they could sort of take their pick, if that’s what they want to do.”

Kuykendall says that the difference between the two countries is that while the Colombians learned a lesson, Mexico did not. “The corrupt money to be had just influences Mexico too much. It comes down to that,” he says. “They just haven’t learned. For a brief period in there, they shut the traffickers down, but then they let it get out of hand and now they’re unable to control.”

Now, at age 82, Kuykendall says the emotions surrounding what happened to Camarena never go away. Which is why, in addition to seeking more justice for his friend, he hopes that the truths exposed by Narcos: Mexico will have an impact on both sides of the border. “People in the U.S. need to quit using dope and the Mexicans need to quit producing it. Either you do one or the other. Both of them take a resolve that just doesn’t exist today,” Kuykendall says. “Hopefully, it will embarrass the Mexican government and the Mexican people will exert some influence, as much as they can, to change things. They have a new president now. Narcos is a very popular show and whether or not it will affect things or have an impact? I certainly hope so.”

Narcos: Mexico is now streaming all 10 episodes on Netflix. Keep up with THR‘s show coverage here.