[This story contains spoilers from the entire second season of Netflix’s Narcos: Mexico.]

“The madness has begun and no one can stop it,” Felix Gallardo (Diego Luna), the Godfather of the Guadalajara cartel, tells DEA agent Walt Breslin (Scoot McNairy) to close out the second season of Narcos: Mexico. “You’ll be drowning in blood, chaos. Now you’ll see what happens when the cage breaks open and all the animals run free. You’re going to miss me.”

Those words, which Felix delivers from behind bars after finally being arrested for the murder of DEA agent Kiki Camarena (Michael Peña) — which played out in season one of the Netflix drug cartel’s Mexican reset — serve as a warning for what’s to come next in the ongoing Mexican drug war. Though the streamer has yet to officially renew Narcos: Mexico for a third season, showrunner Eric Newman told The Hollywood Reporter there is enough real-world content for the cartel saga to “go on forever,” and Felix’s closing words signal the brewing war to come between the rising cartels from Juarez, Tijuana and Sinaloa.

But where does that leave Felix Gallardo and the star who plays him?

“It’s too early to say. I don’t know,” Luna tells THR about whether or not his two-season starring role has officially come to an end. Though he won’t rule out the possibility of returning in some capacity (the real Gallardo, who is currently serving a 37-year sentence for the murder of Camarena, continued trafficking from prison for some time), Luna, who is set to star in Disney+’s forthcoming Rogue One prequel series, says he views the final scene as a fitting way to wrap Felix’s story: “I like that call to the audience to remind them that, yes, [Narcos] is fictionalized, but it’s based on a reality and a reality that needs your attention.”

Below, in a chat with THR, Luna discusses the “challenging and demanding” role of playing a narco Godfather for two seasons and why revisiting this time period is personal for the Mexican-born actor, and also explains why “all of these characters are victims” in the end — whether they are “villains” or not.

When you found out Narcos: Mexico was returning for a second season, what were you most wanting to explore with your character, Felix Gallardo?

Well, the fall, right? He ends the first season getting rid of everyone he can trust. You know he’s going to have to pay for that somehow. He gets rid of his family, he gets rid of his friends. And suddenly, he thinks he’s indispensable and that he’s untouchable. And the fall is what I wanted to play, because I had to complete that journey and that arc that the character has naturally, and that the writers talked about. Also, to be honest, there was another part of me that was very interested in telling this part of the story because in the Mexico that he lives in the ’80s — the second season ends in the ’80s — that is a Mexico I experienced as a kid. That’s the Mexico I lived in. And I remember that Mexico. It was quite interesting to revisit the earthquake and the election of ’88.

This time around, did you try to contact Gallardo or anyone around him? How did you research him for season two?

No. No way. I didn’t have to. It was enough with all the information that I found. And also, it’s not something I need. We’re taking some liberties. This is a fictionalized story. So there was room for creative experience and I was more wary about the big picture. I was more wary about being able to talk about it completely, about the system. Because the actual problem is the system. The system creates these characters and then gets rid of them when they’re not needed anymore. But it’s not about that. The real issue here is the old structure that leads to corruption on both sides of the border. So I didn’t look [to contact him], no. It was about the big picture.

After playing him for two seasons, and humanizing him as you do when portraying a character, how do you feel about him now?

Well, it’s just a character. I play the character and that’s it. There are some realizations I had in the process of playing this man and in doing Narcos. It’s the honesty in which this story has been told to us. We fall into the trap of separating good and bad people and of saying, “There are villains and there are good guys and the good guys are chasing the villains.” That’s not true. What this tells you at the end is that somehow all of these characters are victims of the system and it’s bigger than them. Whatever strategy governments have used have failed in this war. The war on drugs is a war we already lost.

But the system doesn’t want to understand that and understand the complexity. They would much rather have the story told like this, “We can catch this guy and put him in jail and then the problem is solved.” Well, no. It hasn’t been solved. We heard so many times that they caught this guy and killed this one, but the system still operates — and very successfully. So what we’re talking about is how it’s a global issue and how many parts of society, from the politicians to the banks, are actually contributing to the system. It’s very catchy to say, “It’s bad guys doing these horrible things.” Well, yes. I’m not justifying their actions. What I’m saying is they’re not the top of the problem. That to me is the big realization. 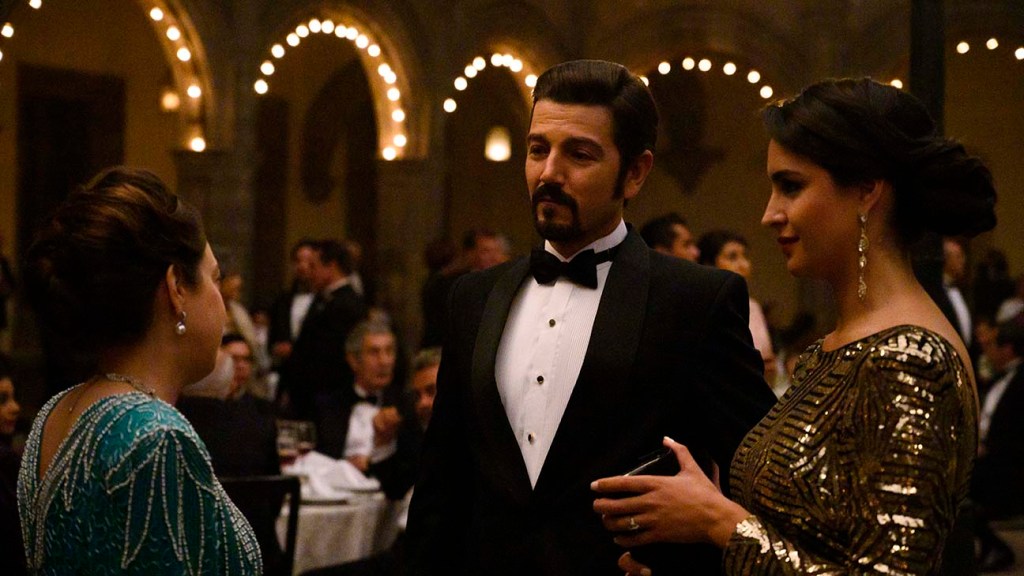 At the end of the season, Felix is arrested and taken out, but things will only get worse. How does his exit usher in the next generation of cartels in the Mexican drug trade?

I do remember that time period, where [Carlos Salinas de Gortari] was the president, which is exactly what happens towards the end of the season — is when things start to go mad, to the point where they kill the candidate, the future president, in 1994. Because until then, PRI was always in power and they kill a candidate in the middle of the street in a demonstration in Tijuana. I remember those years when we used to say that the violence came to the city: “The violence came and found us.” It was always about things happening in the mountains and in their territory, but suddenly their territory was the whole country and suddenly the violence was happening in front of everybody’s eyes. I do remember those days and the shock that represented for us.

'Narcos: Mexico': Scoot McNairy on How His Secret Role Comes to Life in Season 2

The real Felix Gallardo continued trafficking while in prison for some time before losing total control. Would you want to explore that if the show returns — is there a future for you on Narcos: Mexico?

If this is the end of the road for him, how does it feel to be wrapping your time on Narcos?

The journey, so far, it’s been very interesting, very challenging and demanding. Because the material is very dark and the character — it’s hardcore to portray this man and to do it for such a long period of time. We finish the season in six months and then there is looping and promotion, so just with everything together, it’s a big chunk of my year. And I need to breathe. As soon as I was done with the shooting, it was quite a relief to be honest — in a good way, because I am very proud of what we’re doing, but I have to go out and hear and tell other stories. Because it’s not the only story that I care about for my country. There are so many other stories that I want to be telling. And I have a company and I produce and I direct, and I have a family and I have kids. It was a relief to be able to go back to my kids. 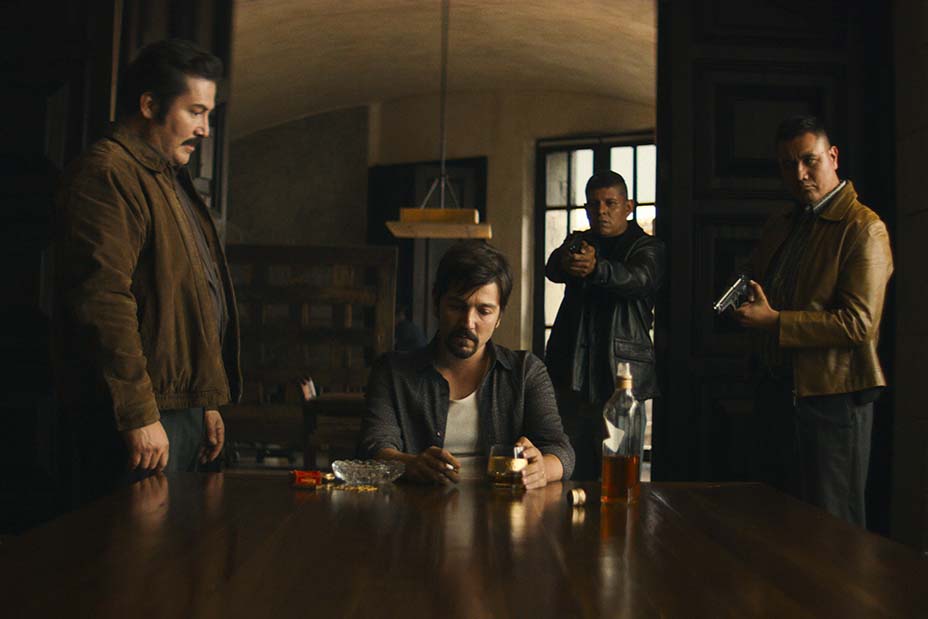 At the end of last season, you spoke about your hopes for the new president, Andres Manuel Lopez Obrador, with the show coming out. What was the reaction to season one in Mexico when you went home, and have things changed?

They have changed because we have a new president and it’s not the same party that was in power for the last six years, which is great. At least the message sent to politicians is: Whatever you do will have a consequence. Because the last administration was the most corrupt in so many years and I believe they got punished for that. But in terms of the violence we experience, the year has been as violent as the past. So, no, things haven’t changed in terms of the violence. And that is the truth.

The reaction in Mexico was very different than anywhere else, but tons of people reacted positively. The conversation there is different because we are living it; we are experiencing this. Netflix doesn’t share numbers with us, but they tell us in general and apparently it’s the most successful in Mexico, in terms of viewers. So that was big. To be honest, I’m more interested in what can trigger out of Mexico. Because we are living this nightmare. There’s a global issue, where Mexico is getting the worst of it. We’re the ones dealing with the violence generated by a mission that doesn’t just belong to us. We happen to be between the country that produces and the biggest country that consumes. That is something that the world needs to reflect on. This issue, as much as it belongs to us, it belongs to the rest of the world because consumers are everywhere and this strategy so far that the world has been using has failed.

Your final scene is an imagined conversation with Scoot McNairy’s character, DEA agent Walt Breslin, where you explain what’s to come next in the Mexican drug war. Why was this a fitting way to say goodbye to Felix?

It is a great way to remind people what the series is about — the big picture. It’s a nice way to remind people how much the story they just heard has to do with the present we are experiencing. It is a reminder to the audience to say, “You saw this? Well, think about how much this had to do with the nightmare you are living today. With the stories you read in the papers. There is a connection.” I like that call to the audience to remind them that, yes, it is fictionalized, but it’s based on a reality and a reality that needs your attention. I like that gesture that the writers had to remind people how relevant the story is.

Showrunner Eric Newman has called Narcos his “Marvel superhero universe of connecting narcotraffickers” and likes to bring characters back. Would you be open to making a cameo or appearance in a future season?

Why a cameo? I mean, who knows what can happen?!

Well, he also acknowledged that you will be busy in a galaxy far, far away.

I’m pretty busy with my two kids, that’s why I’m busy! But I have time for everything. I enjoy my profession, so we’ll see.