Narcos: Mexico can be watched as if it’s the first season of Narcos, according to showrunner Eric Newman. Indeed, Mexico is about a new chapter in the drug war, but it’s one that the Netflix cartel drama has laid the groundwork for in previous seasons.

The new season (which bows on Netflix Friday) blows up the show’s timeline when it opens in the Sinaloa region during the late 1970s — the birthplace of Mexican dope smuggling and “the guys who would go on to run the game” like Felix Gallardo and El Chapo, the American narrator explains. Up until now, the series had tracked Colombia’s drug war in chronological order. Narcos began in the 1970s with a two-season story dramatizing the rise and fall of Pablo Escobar (played by Wagner Moura) and his Medellin cartel, ending with Escobar’s death in 1993. The third season focused on Escobar’s successors, the four bosses of the Cali cartel, and brought the show’s timeline up to the mid-1990s with their eventual arrests.

Narcos boss Newman told The Hollywood Reporter that the initial plan was to jump over to 1996 Mexico with Narcos: Mexico — the fourth season overall — but that their research into the Mexican drug war forced them to change their plan. “You almost can’t tell the story of the modern drug trafficking story in Mexico without telling the story of the Guadalajara cartel, which is how it all started,” he explained.

The Guadalajara cartel was formed in the early ’80s by “El Padrino” Miguel Felix Gallardo (played by Diego Luna), along with Rafael “Rafa” Quintero (Tenoch Huerta) and Ernesto “Don Neto” Fonseca Carrillo (Joaquin Cosio). Narcos: Mexico also introduces new DEA agents to fill the departing shoes of Pedro Pascal’s Javier Pena and Boyd Holbrook’s Steve Murphy, the latter of whom departed after season two. The third season ended with Pena (Pascal) passing up on the DEA’s offer of a transfer to Mexico, the next big threat and Colombia’s successor, after he helped put all the Cali bosses behind bars.

In the Narcos: Mexico story, Michael Pena portrays real DEA agent Kiki Camarena, who joins up with a Guadalajara unit led by James Kuykendall (played by Matt Letscher) — another real agent who consulted on Narcos: Mexico — when the story travels back 15 years. Similar to how Pena led the DEA fight against Escobar and Cali, it’s the perseverant Camarena who goes undercover to garner intelligence on Gallardo, becoming entangled in a way that will affect the drug trade and the war against it for years to come. The season opens with a flash-forward to Camarena being abducted before going back to the beginning to build up to what Newman calls a “collision” between Camarena and Gallardo. That DEA-narco relationship, the veteran Narcos showrunner says, made this era of the story “the best path to get to jumpstarting the Mexican chapter.”

Guadalajara represents the beginning of the modern Mexican drug trade because, as Narcos: Mexico‘s narrator explains, it gave birth to the country’s first cartel. After beginning with marijuana trafficking, Gallardo eventually united traffickers across Mexico’s separate criminal “plazas” and entered the cocaine business with a collaborative network that transported drugs to the United States. They ran concurrently with the Colombian cartels who utilized those smuggling routes.

“Cali was the cartel that really utilized the smuggling routes through Mexico and the Mexican heroin smugglers who were already incredibly successful,” Newman had explained of the Colombia-Mexico connection and enterprise that was formed. “They very much got the Mexicans into the cocaine business, so there is sort of a natural evolution there.”

Adding, “What’s unique about the Guadalajara cartel is what they did organizationally. They really unified a large part of the trafficking world under one banner. They started it all and waited for the Colombians to fall before taking over the trafficking business. The frontline of the drug war is with the end users in the United States who continue to use and buy drugs, but we never seem to grasp that. Mexico is where we’ve chosen to fight it.”

The character of Amado Carrillo Fuentes (played by José María Yazpik) — nicknamed Lord of the Skies for his air smuggling routes — and his Juarez cartel laid some of that connective tissue in season three when Fuentes met with Cali boss Pacho Herrera (Alberto Ammann) to discuss a shipment plan. Fuentes is the nephew of Guadalajara boss Don Neto and returns in Narcos: Mexico, where viewers will see his origins.

Another high-profile player who will be introduced in Mexico is Joaquin “El Chapo” Guzman (played by Alejandro Edda). Newman had hinted about the impending arrival of El Chapo in Narcos‘ world ever since Mexico became a part of the timeline: “Chapo was there at the beginning, in a way. He was one of the younger guys in the Guadalajara cartel before it splintered and he and another guy were given Sinaloa as territory,” he said of one of Mexico’s cartels still operating today.

The real El Chapo, meanwhile, is currently on trial. Some of the Guadalajara members will go on to play bigger parts in the Mexico drug war saga, which Newman points out continues to evolve. “Unlike Colombia, where the story sort of reached a conclusion, the Mexican story continues on and on and on,” he said ahead of Narcos: Mexico‘s debut. And while Newman has long spoken about doing more seasons (Netflix: Mexico has yet to be renewed), he adds, “Unfortunately, I don’t know that we’ll ever catch up because each year there is a new turn.” 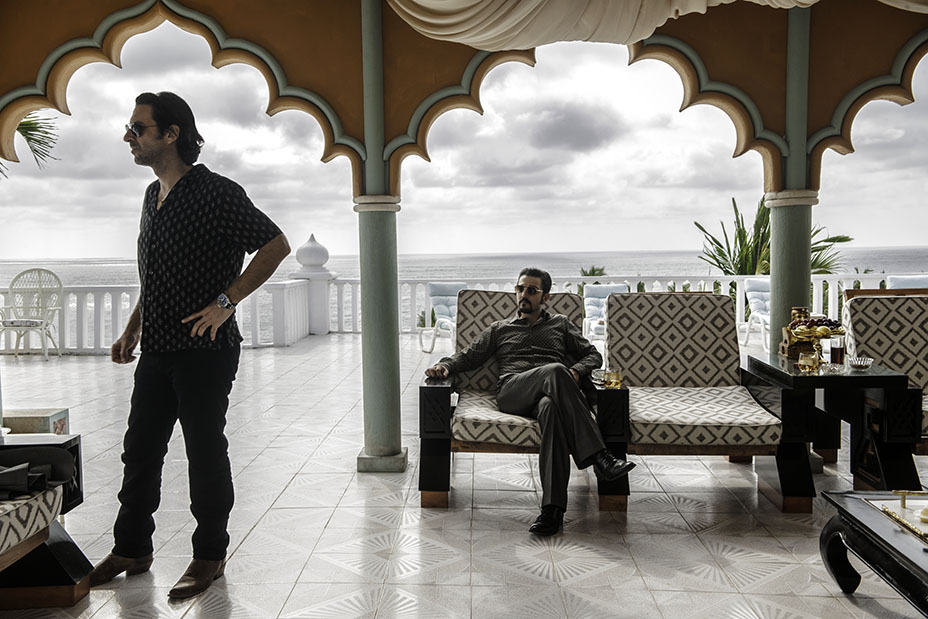 Narcos: Mexico is currently streaming all 10 episodes on Netflix. Keep up with THR‘s show coverage here.