Narcos: Mexico has been billed as a reset of Netflix’s drug cartel drama. Technically, it’s the fourth season overall, but there’s a new cast, location and story — all of the elements that comprise a reboot. But Eric Newman explains it concisely: It’s simply the Mexican chapter in the continuing story of the drug war. Cocaine, as always, is the common thread.

Newman — writer, producer and showrunner of all Narcos seasons, including Narcos: Mexico — says Mexico is a “very, very different” world than Colombia, which is the setting for the first three seasons. After tracking the rise and fall of Pablo Escobar (played by Wagner Moura) in seasons one and two, Narcos centers on Escobar’s successors, the four Cali cartel bosses, in season three. The end of the third season saw star Pedro Pascal ending his run and brought the show’s timeline up to 1996, when the Cali cartel reached the end of its reign.

When Narcos: Mexico begins, the series travels back in time to 1980 Mexico to show the origins of the Guadalajara cartel and “The Godfather” — El Padrino — Miguel Felix Gallardo, played by star Diego Luna. Co-star Michael Pena plays his adversary, real-life DEA agent Kiki Camarena, who is abducted in a flash-forward that opens the season.

“We always planned on moving the show to Mexico — it was part of the original DNA going back as far as I can remember that we’d do Colombia and eventually move to Mexico,” Newman tells The Hollywood Reporter. “We thought we would move chronologically to 1996 Mexico, but when we started doing the research, we came to find that you almost can’t tell the modern drug-trafficking story in Mexico without telling the story of the Guadalajara cartel, which is how it all started.”

The Guadalajara cartel was formed in the ’80s by Gallardo (Luna), along with Rafael Caro “Rafa” Quintero (Tenoch Huerta) and Ernesto-Fonseca “Don Neto” Carrillo (Joaquin Cosio). As the show’s American narrator explains, “Before the birth of cartels, the trafficking game was made up of lone wolves. Felix’s idea would unite them, but put one group in charge.” The cartel began with marijuana trafficking and eventually entered the cocaine business as a well-organized establishment, running concurrently with the Colombian cartels that utilized smuggling routes through Mexico.

“Under Felix’s leadership, it was the three of them [Gallardo, Rafa and Don Neto] creating this union of drug traffickers that would partner with the government and that story instantly grabbed me,” says Newman of why they begin the Mexican chapter with Guadalajara. “And then, the story on the other side, the story of Kiki Camarena.”

The dramatized story of Camarena’s real-life abduction will play out on Narcos: Mexico, meaning a Google search will reveal how the season ends for viewers who wish to remain in the dark. When Camarena arrives in Mexico City at the start of the season, the DEA was a relatively new law enforcement agency (established in 1973) and one that was light on personnel and resources. To put it in perspective, as Narcos: Mexico explains in the first episode, there were more women in the NYPD than there were agents in the entire DEA. Camarena’s unit is run by James Kuykendall (played by Matt Letscher), another real-life agent who consulted on Narcos: Mexico.

“Kiki was having his own awakening at a time when people hadn’t quite figured out how big this was and how big it was going to go — both the traffickers and the law enforcement side hadn’t figured it out,” says Newman of the drug war in Mexico. “Discovering the collision between Kiki and Felix made it so immediately clear that this was the best path to get to jumpstarting the Mexican chapter of this story.” 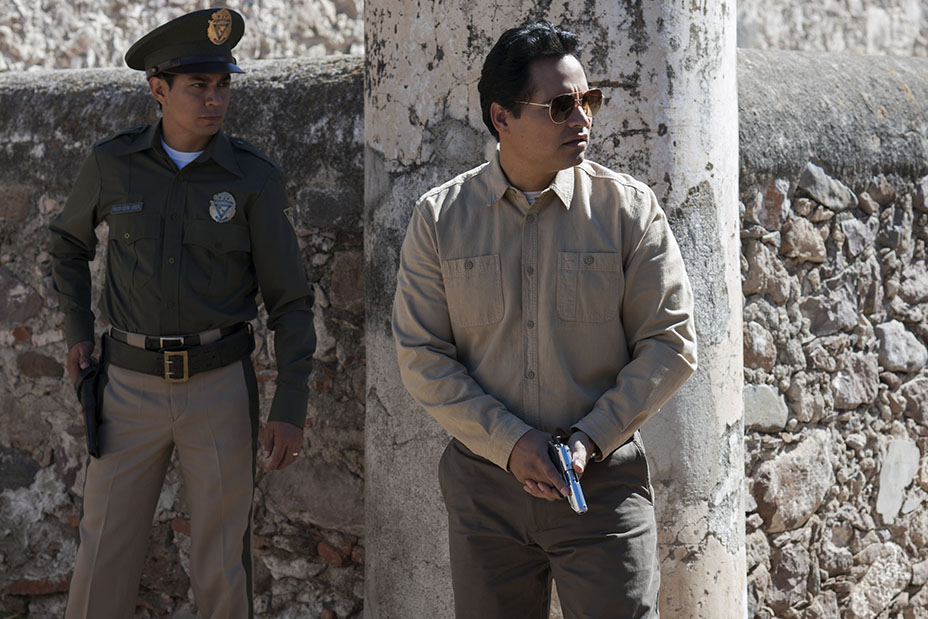 Unlike the Colombian chapters, the Mexican chapter was slightly easier for Newman and his team to research: first, due to the proximity to America, and second, the fact that many players in the story — including law enforcement agents, journalists and former politicians — are still alive.

“[We spoke to] people who remember this time very clearly and it allowed us to put together a database, for lack of a better word, of all the significant events that characterize the era. And that allowed us, I think, to tell a story that was as authentic as we could make it without being able to read peoples’ minds,” says Newman. “What was interesting about this move was that Colombia had been for many a distant and far-off place. Mexico is undeniably not such a place.”

Newman’s long-term plan has always been to exploit the “revolving-door aspect to narco kingpins.” In order to do so, production moved to Mexico City and the show experienced a tragic start. Location scout Carlos Munoz Portal, 37, was found dead in his car northeast of Mexico City in a high-crime area. “I’ve been in this business for 25 years and Carlos was the first person I’ve ever lost while on the job,” says Newman. “It definitely changes you. You can’t lose sight of it. This was a location that I asked for. He went to find it and died. So that’s a scary, heavy thing, particularly for his family. It’s colored things, certainly.”

An investigation determined that Portal’s death was not connected to the show and that there were no cartel-related threats to Narcos. Security was increased and safety precautions were taken, and Newman, speaking to THR from Mexico City, says there were no threats throughout the entire shoot. “We had no accidents. No one got hurt. We never received threats from the cartels or anyone claiming to represent them. This was just a horrible accident,” he says. “It was a very inauspicious, tragic beginning, but we’re proud of the show. We wish things had happened differently in the beginning.”

When Narcos: Mexico bows its 10 episodes Nov. 16, Newman also encourages newcomers to Narcos to enter the story. “Though it is connected to the show in a lot of ways, it’s also its own show. I think you can choose to experience it as the first season of Narcos that you ever watch and then you can go back and discover seasons one, two and three, which I think would be kind of fun,” he says.

Reiterating the two very different worlds, he says, “Colombia and Mexico, despite the fact that they both speak Spanish, have very little in common. To conflate the two so closely would be to sort of do both a disservice. Mexico is our neighbor with whom we share one of the largest borders in the world. And that, for us, was a very fertile place to play and to tell that story. And I believe for the audience, it will feel familiar in some ways, but in more ways it will feel like a different chapter in the story and I love that.”