[Warning: This story contains spoilers from the entire third season of Netflix’s Narcos.]

Narcos has amassed many victims, but one unsuspecting star has joined the long list after season three.

Javier Pena, played by leading man Pedro Pascal, emerged a defeated man in the finale of the Netflix drug cartel series’ latest season, which released in full on Sept. 1. After waging what seemed like a futile war against a corrupt Cali — defying all orders and Colombian due process along the way — Pena succeeded in putting all four of the Cali godfathers behind bars. The Rodriguez brothers, Gilberto (Damian Alcazar) and Miguel (Francisco Denis), remain in prison, after being extradited to the U.S. to serve life sentences. Pacho Herrera (Alberto Ammann) was murdered in prison in an act of cartel vengeance, and Chepe Santacruz Londono (Pepe Rapazote) was killed shortly after escaping his cell.

But along the way, Pena discovered just how deep the corrupt ties run when uncovering that Cali bought the presidency in 1994 and that his U.S. Ambassador boss, along with the CIA, knew about it. If it weren’t for the story going public in the press, the godfathers would have eventually walked. In the final moments of the season, it’s clear that the layers upon layers of deception appear too much for Pena to bear when the war again shifts, this time to Colombia’s successor: Mexico.

Called the “real enemy” by his DEA colleague, Pena is asked, “What else is a guy like you going to do?” Still, Pena submits his resignation and returns home to Texas, where he witnesses a boat full of smugglers bringing what can only be assumed to be cocaine into the U.S.

“You can stand here for an hour and you’ll count 20 of them going by,” Pena Sr. says to his son before asking if he will take the DEA up on their offer to go to Mexico. Pena replies, “I’ve done enough. I’m through.”

Though Pena then stares into the distance, pensive about his situation, Narcos showrunner Eric Newman tells The Hollywood Reporter that Pena’s story on the show has likely come to an end.

“What’s tragic about it is that you’re losing truly one of the good guys,” Newman explains of Pascal’s tenacious Pena, in his own way becoming a victim to the drug war. His hopeless discovery that “even the good guys don’t have a code” makes it “almost impossible” for the dogged DEA agent — now credited for bringing down Escobar and dismantling Cali — to continue on in his post.

Though the season finale passes the torch to Mexico as the next chapter, Newman explains that the future in Narcos‘ world will also require an introspective look at where the demand is coming from: The U.S., he points out, is the “greatest market for cocaine in the world.” With the war being brought closer to home, Newman is eyeing another reset to tell the season four chapter of Narcos, potentially with an entirely new cast.

Below, Newman chats with THR about some of the most fascinating stranger-than-fiction stories of the third season, leading man Pascal’s future as Pena on the series and what could be in store for season four, set for next year.

We spoke before about your direct communications with Cali cartel insider Jorge Salcedo, played by Matias Varela on Narcos. The season explored his inner torture — from telling his wife he’s a good man to the death of his employee haunting him. Were those conversations you had with him, about whether he forgives himself?

There were some questions that he wouldn’t answer, which I thought was very interesting. I said, “Well, what did your wife think when you said, ‘Hey, I’m working for the DEA and we’re going to get out of here.'” He never really gave me a satisfying answer. I think it’s a very complicated time, looking backwards for him. It was probably pretty scary, and I think there’s certainly some guilt involved. He’s not angry about it. I think he’s sorry about some people he knew who were killed. But he reminded me a lot of Russell Crowe’s character Jeffrey Wigand from the movie The Insider, a character we borrowed from for Jorge. He is a guy who is stuck in this thing and there’s a toughness to him, and a melancholy as well. I think Matias did an amazing job and gave a really great performance.

In the end, a fellow agent explains to Pena that the drug war will never see the likes of what Cali was ever again. How does the dismantling of Escobar, followed by Cali, impact the drug war, which is still going on today?

It has not ended. We continue to focus on the foreign threat, those guys in Latin America who keep sending us their cocaine as if we’re not the greatest market for cocaine in the world. That’s probably more the problem than someone having the audacity to make a bunch of money on a product that grows freely in the jungles of Ecuador, Peru, Bolivia and Colombia.

What we’re trying to do on Narcos is paint an evolving picture of a very complicated, largely failed enterprise to fight drugs on foreign soil. What we’re really doing is playing an international version of whack-a-mole, where we smash the head of one cartel and another cartel picks up the ball without missing a step. That’s what we’ve seen and what we continue to see. Any attempt to control it is doomed unless we’re looking inward and attacking the demand for cocaine, because that’s really the problem. 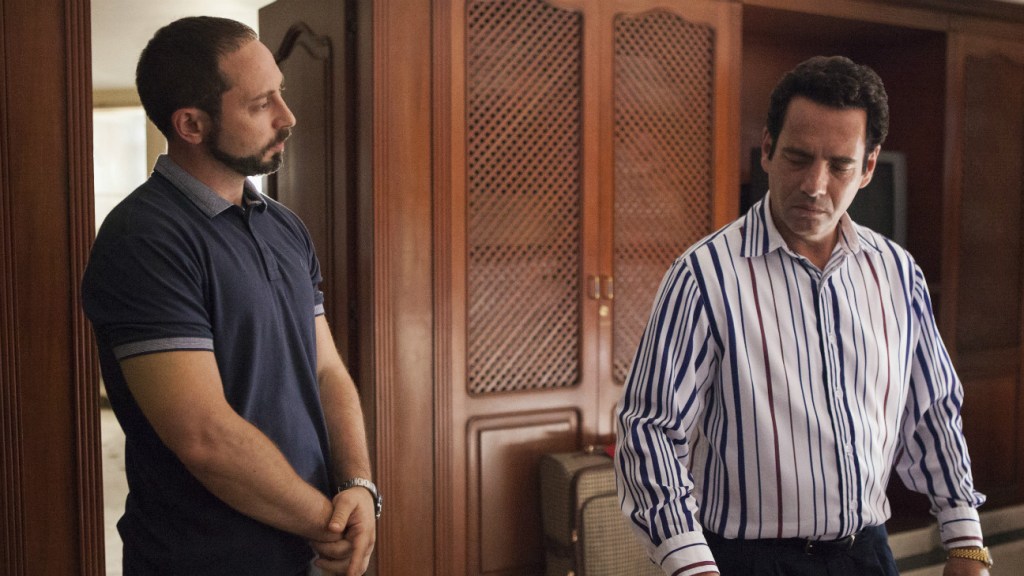 The finale sets up Mexico as the next chapter. We met Amado this season when Pacho Herrera went to Juarez. Will he be the thread to next season?

Amado Carrillo Fuentes, aka the Lord of the Skies. If and when we go to Mexico — and obviously the end of the season and the final scene suggest that trafficking is much closer to home than we thought. That’s the great irony, that you go down to Colombia to try to confront head-on the threat of cocaine trafficking, and you end up actually bringing it closer to home. The battle you thought you were fighting over there has now, largely as a result of your efforts, moved closer to our shores.

Past a certain point, and I think we’ve just reached that point in our show, Mexico became the kings of the cocaine game. You realize that you shut down the Miami-Caribbean corridor where they were bringing all their cocaine in for years, and that cocaine is going to find another way in. Why not this country of 130 million people with a 2,000-mile border they share with us? That seems to make the most sense, and that’s exactly what happened. There is definitely a natural passing of the torch to Mexico, who at the time were already very successful as heroine and marijuana smugglers. It makes perfect sense that you would employ what they call the Mexican Trampoline to bounce cocaine into the States.

Pena fake retires and seems to be doubting his own words in the final moment of the season. Is it safe to assume that Pena will be back and going back to Mexico?

I would not assume that. I think we may do something really interesting that surprises people. I think you can believe his final words.

Does it feel like you’ve fully told Pena’s story on Narcos, like you said the story of Boyd Holbrook’s Steve Murphy had been told in the first two seasons?

I do think that we’ve told Pena’s story pretty effectively. “The only way to win is not to play” is a certain aspect of it. He has been irremovably changed by this experience, and whether he’ll be happy in his life at home? I would say no. I don’t think it’s a particularly happy ending for him. But I think it’s certainly accepting the futility of this. I love the filmmaker John Ford, he’s really one of my favorites. You look at movies like The Searchers or The Man Who Shot Liberty Valance, and the moment when you realize that even the good guys don’t have a code, and it’s almost impossible to live in that world. I think that’s what happens to Pena in season three of the show. He sort of realizes that, not only am I playing a rigged game, but everyone around me is OK with it, so what can I do? It’s definitely a defeat for him, and his only move is to just say, “I can’t continue to function.” What’s tragic about it is that you’re losing truly one of the good guys. He’s put in positions where he has to do terrible things and does them and comes out of it feeling like he’s probably pretty broken.

Was there a real DEA agent who went on the record about Cali being a “narco-democracy” like Pena does in the end, forcing his resignation?

Yes. There was a guy named Joe Toft who was the resident DEA agent in charge in Bogota at the time. In October of 1994, he went on the record and said the Cali cartel had total control over the political machine in Colombia, and he was called out by the Colombian president for having offended the country. But it was true. That government had been completely compromised by money, and so that was definitely inspired by that character.

Pacho and Chepe are dead, but the Rodriguez brothers are still alive and in U.S. prison. Did you reach out to them, and did they respond?

We did not. Generally, I’ve found with traffickers that they have one story to tell, and it’s the story of how they’re misunderstood. That the government was the bad guy. Not only is that not particularly helpful, but we have to be very careful about our subjects. Our subjects even in our show kill people for saying bad things about them. So it’s always better to not have entered any kind of negotiation with them. I’d rather keep these guys at arm’s length, and to be fair, I think the Rodriguez brothers aren’t particularly interested in talking to us, I would imagine. They’ve got their own stuff going on.

Have you thought about if they get slipped a copy of the season, and what they might think?

We’ll see. If we were in Colombia, for sure. But given that they are in American prison, I don’t think anyone is giving them anything. American prisons for those guys are really rough, there’s no favoritism. Some minimum-wage guy is telling you what to do all the time. They’ve been in there for 12 years now. They came to America in 2005. It was a time compression that we did on the show, but they were in Colombia for a while before extradition came through.

Does Pena’s up-in-the-air return mean you are looking at an entirely new cast for season four?

It’s definitely on the table.

Narcos has been renewed for another season. How long do you envision it going beyond that?

I would very much like the show to go beyond season four. It seems like there is an opportunity to pretty much go into the present.

The third season of Narcos is now streaming on Netflix. What did you think of the season? Tell THR in the comments below and head here for full show coverage.