[This story contains massive spoilers from the “If Tomorrow Never Comes” episode of Nashville.]

Connie Britton’s Nashville song is over.

For Friday Night Lights alum Britton, the decision to leave was hers and had been percolating before the country music soap was canceled at ABC and subsequently revived at CMT.

Below, Britton talks with The Hollywood Reporter about her decision to exit the series, conversations with creator Callie Khouri as well as showrunners Marshall Herskovitz and Ed Zwick about why Rayna had to die and what she’d like to do for her next act.

Was it your decision to leave Nashville?

It was my decision. It was something that, for various reasons, had been percolating for me. What was really important to me was that it felt like the right time. This summer, when the show went to CMT, it felt solid and stable. When Marshall came in, we had a conversation and he came up with the way this story would lay out. We both agreed — and I said to him that what was most important to me was that we really do justice and honor the character and all of these characters and the world that we’ve been living in for these last five years.

What prompted your desire to leave? Did that arise before or after ABC’s cancellation?

There were a lot of different factors that played into it; it was a cumulative thing. I don’t need to go into great detail about what that was, but for me, it felt like the timing was important and my No. 1 priority was the show and making sure that it was done in the right way.

There had been rumors for a few months that you would have a reduced role. Why leave now, at the halfway point, versus the end of this season?

When I talked about it with Marshall, [the producers] were looking at the season in essence as two truncated seasons. Marshall felt story-wise, that this was a really good way to go. It allows them to use the second part of the season, which is going to feel like a whole separate chunk, as a post-Rayna era or moment. It made sense story-wise.

Would you have returned for the second half of the season if that’s what Marshall’s story dictated? Or did you want a reduced number of episodes?

I would and I told him that. He’s lovely and worked diligently to try to make this feel like a valid departure for this character. I said at one point, “I could stay on!” I left that door open and I don’t know in what capacity, if ever, that could really happen. Marshall was trying to be really respectful of me and I was deferring to what they were trying to do for the story. To some degree, the show must go on. And every single one of these characters is incredibly beloved by the fans and essential to the world of Nashville. I think it’s really going to be exciting and beautiful to see them go on in that world.

Will you watch the second half of the season?

I’m not very good at watching it now! I probably will watch it more because I’ll have more time! (Laughing.)

Hypothetically, if Nashville had been renewed at ABC, would you have felt that same desire to move on?

Yes. It really wasn’t about being on ABC or CMT at all. None of the reasoning behind it had anything to do with network.

Looking at filming these final few emotional scenes, what was the hardest part of all these farewells with everyone?

It was incredibly emotional. It was very difficult for me and it still is. It’s hard for me to talk about without getting a little choked up [pauses] … because I love this character so much and the people I’ve been fortunate to act with for the last five years and our crew. This has become an essential part of my life. It was really tough doing those last couple weeks especially. Those scenes were so emotional. Toward the last couple days, which is when we shot the really intense scenes in the ICU and the one where Rayna actually dies, nobody could get through them without crying. Saying goodbye is really hard.

before we started,” co-showrunner Marshall Herskovitz tells THR about her season five storyline.”]

My last scene of the final day of the episode where Rayna dies — which in essence was the end even though I did come back and shoot more after that — that scene and putting this character that I’m so connected with to rest was brutal and very emotional. The last scene that we shot of that episode was actually the scene of Rayna with her mother [played by Carla Gugino]. Carla is my best friend and she came in to play Rayna’s mother and that was so special and wonderful. The hero of Rayna’s life is her mother and I really love that scene. So to have this dear friend be there and have that be the last scene we shot was really beautiful.

Did you ask Carla to come in?

I did and she jumped in, as good friends do. It was really remarkable for me and I feel so fortunate that that happened.

There are two episodes left in this first half of the season. How many more episodes will you be in after this?

At least a couple.

Hypothetically, should you know ahead of time that Nashville is ending, would you return for a series finale?

What will you miss most about Nashville and playing Rayna?

There’s a lot that I’m going to miss. I’m going to miss working with all those people because I really love them all: Chip Esten, the Stellas and every single actor and member of the crew. And I’m going to miss the crazy stress and then reward of singing because that part of it was a great challenge and I feel lucky that I got to do it.

Was there a conversation with either the showrunners or creator Callie Khouri about killing Rayna off? Was that always the plan? Did you want her to die?

I actually said, “Is there a way to do this where she doesn’t die?” But we thought about it and Callie, too, and we realized that Rayna would never leave her children or Deacon. So there really wasn’t any other alternative. Trust me, if there had been that would have been my preference! (Laughing.)

When you knew the end of your time on the show was near, did you have any special requests for Rayna?

I wanted to be able to spend some time seeing Rayna and Deacon married and exploring what that felt like. Like last season they got married and immediately went into crisis mode, so we never got to see the great reward of all this time that led up to this beautiful marriage moment. I wanted to be able to spend a bit of time seeing what married life did to them. I particularly loved the idea of Rayna and Deacon writing together and getting back to being artists together, and what it looks like to be married as artists and working together as artists and what the conflicts are there and what the value of that is to them and all those complexities.

Connie Britton on CMT's 'Nashville': "I'm in for the Duration"

Looking back, do you feel a sense of closure with Rayna?

I do. That was something that was really important to me. It’s hard to say goodbye. It’s funny, our costume designer Susie DeSanto, who has designed all the incredible costumes over these last five years, she was lamenting in the final episode that, “This isn’t Rayna! Rayna needs to be wearing sparkles!” I did think that it would have been nice to get one more moment of that in there in saying goodbye to her. But I do feel that we were able to do justice to her and to do justice most importantly to the family. The final goodbye with Chip, Lennon and Maisy was such a beautiful moment. They are as much a part of Rayna as Rayna is. 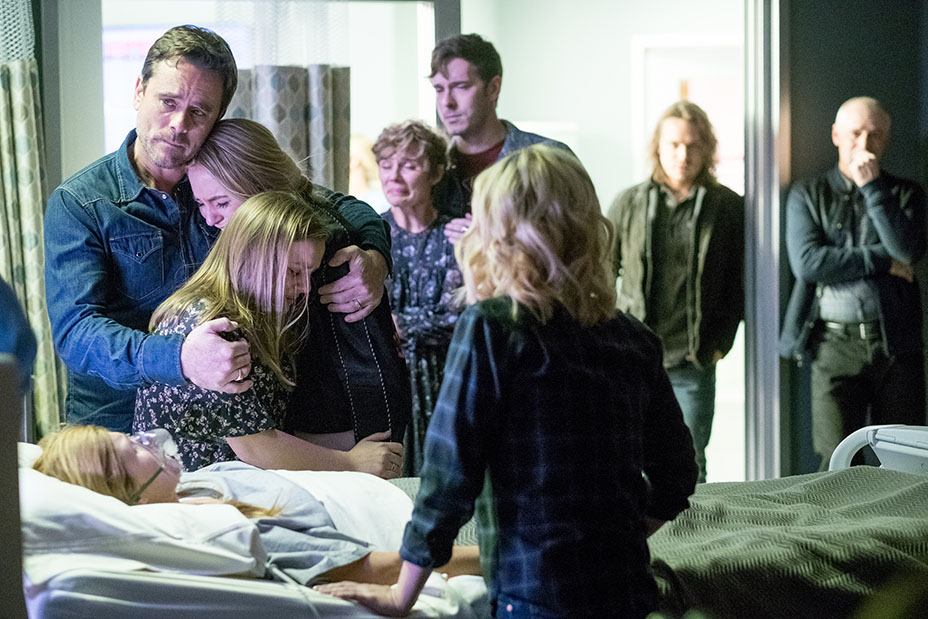 Did you keep anything from the set?

I will admit there might be an article or two of clothing that I swiped! Rayna has had the most incredible wardrobe! In the pilot, there’s a scene on the bridge between Deacon and Rayna and she’s wearing a leather embossed belt that says “I love you” and I’ve always loved it. We’ve integrated it and I’ve worn it several times throughout the seasons. I took that.

Rayna’s death brings the show full circle in a way: Juliette is now the star looking to regain her form and Maddie is the emerging star. Was that part of what your discussions with Marshall and Callie about how Rayna’s death would impact the show moving forward?

I didn’t have as much to say about that just because I always feel that the writers are going to have much better ideas than I have! It really wasn’t for me to say. I don’t feel like there’s going to be one emerging star. It’s an incredible ensemble and I know they are going to be able to do wonderful things with all those characters.

You’re getting a lot of comedy offers this broadcast pilot season and are always in demand for film. What’s next for you?

I don’t really know yet. I want to take a breath for a second. I’ve been working in network television now for 10 years straight without a break and in the middle of that, I adopted my son. I might take a little breath, but I also love working and there are a couple of independent film things that I’m excited about. On the TV side, I would really love to do something starting at the creation and working up and would like to start from the development angle on that. I’m looking into that a little bit and am just really open to anything.

'Nashville': Is This the End for Connie Britton?

Would you do broadcast again or is cable/streaming more attractive?

I’m more interested in something that isn’t quite such a rigorous schedule, however that manifests! (Laughs.) Beyond that, I’m very open.

Have you thought about launching a production company? Or signing an overall deal somewhere?

I definitely have thought of all that, particularly a production company. That’s something that’s very interesting to me. All of it, for sure, but I do love the creative side and I love starting it from the ground up. We’ll see.

You worked with Ryan Murphy on season one of American Horror Story and on American Crime Story. Has he reached out to you about anything specific?

He hasn’t, but you know Ryan! I’ll always go back and work with Ryan. I would love to do that at some point, if the right thing comes up for him.

Critic's Notebook: 'Nashville' With Less Connie Britton? Why Would Anybody Want That?

What did you think of Rayna’s death? Will you miss Britton and Rayna on Nashville? Sound off in the comments section below. Check back to THR on Friday for an interview with Nashville co-showrunner Herskovitz.