As the fall TV season gets into full swing, NBC is airing promos touting itself as “America’s most watched network.” The basis for that claim? A victory among total viewers in the 52-week TV calendar that began in September 2017.

But CBS, too, claims the “most watched” title and boasts it had the most viewers during the traditional 2017-18 season that ended in May — despite NBC having aired the Super Bowl and the Winter Olympics last season.

The networks are arguing over bragging rights, essentially. NBC was the unquestioned leader in adults 18-to-49 in 2017-18, and those ratings are what drive ad rates. NBC secured both overall increases and double-digit hikes in CPM, or cost per thousand viewers, in the 2018 upfront market.

Without events like the Super Bowl and Winter Olympics, both of which NBC aired in February, the network’s two-year winning streak in the 18-to-49 demographic could be in jeopardy. “It’s significant to note that even excluding sports from all the averages, we are still No. 1 in the key 18-to-49 demo for scripted programming and/or unscripted programming,” NBC Entertainment chair Bob Greenblatt noted Sept. 11 in toasting his network’s success.

Yet without the big events (and without Thursday Night Football), NBC is likely to regress some. CBS, which has the Super Bowl, and Fox, which picked up the Thursday NFL rights, are poised for gains.

Analyst David Campanelli believes that the Peacock’s regular programming has a good chance to stay at the top thanks to reality mainstay The Voice; the reliable Chicago franchise; and This Is Us, the top returning series in the 18-to-49 demo. This Is Us‘ 5.4 rating after seven days of delayed viewing was almost double that of NBC’s No. 2 scripted series, Will & Grace, at 2.8.

“[Ad buyers] think about it more in terms of regularly scheduled primetime programming,” says Campanelli. “So in that metric, it’s probably going to be NBC again. CBS probably [will be] in second. ABC losing Roseanne certainly didn’t help its case. Fox, the NFL helps quite a bit. … It will certainly give them a bit of a lift. But I’d bet on NBC to probably stay No. 1.”

On CBS, The Big Bang Theory’s final season will likely power it in 2018-19, and the network has high hopes for its Murphy Brown reboot. Young Sheldon and the evergreen Survivor also ranked in the top 20 in 18-to-49 last season.

Fox will almost certainly improve in the fall thanks to the NFL. “Football’s been the punching bag the past couple years for being down in ratings,” Campanelli notes, “but it’s still incredibly highly rated, and it does bring all that additional value” with promos pushing Fox’s pickup of ABC’s Tim Allen sitcom Last Man Standing and the freshman retirement comedy The Cool Kids.

“It’s also two hours of programming time, so that’s two fewer hours you have to program,” he says. “It allows you to be more selective with what you put on the air and theoretically fill up the rest of the week with better programming because you’re spread less thin.” 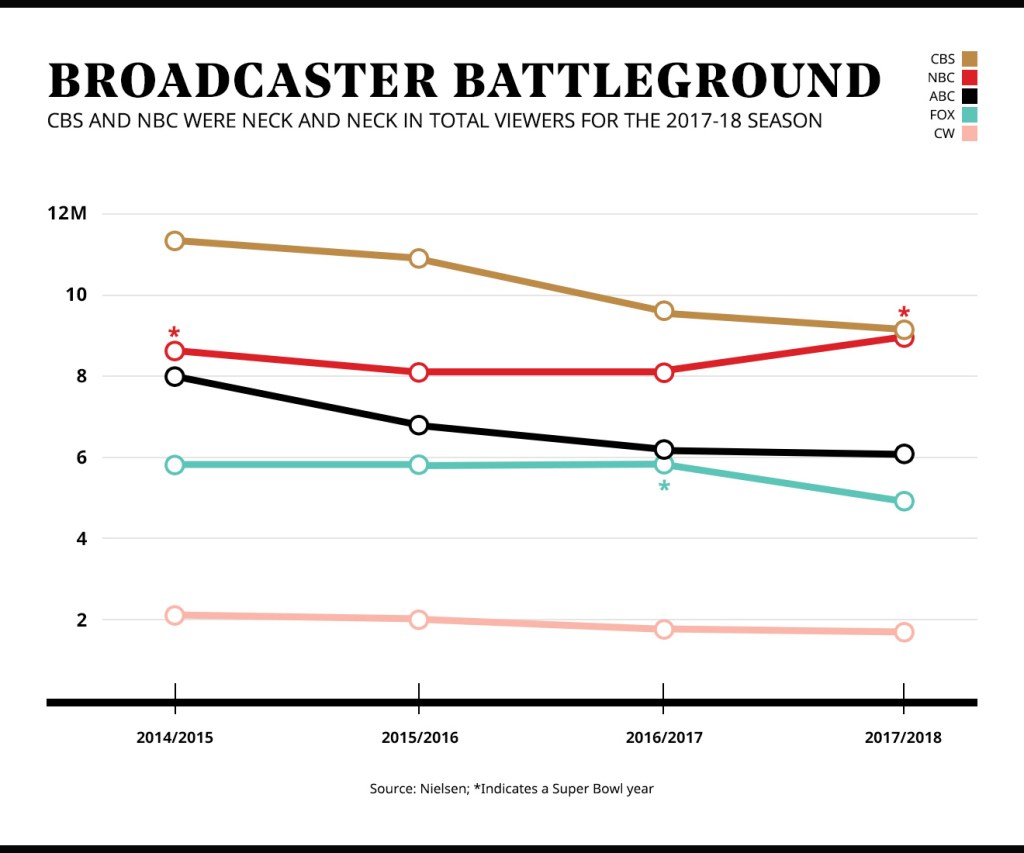