Netflix added more than 9.6 million subscribers during the first three months of the year but warned that the next quarter could see slower growth.

The company’s stock on Tuesday was trading down as much as 6 percent after-hours on the earnings report, though shares eventually settled down around 1 percent. Netflix’s stock market performance is often tied to investor concern over its ability to keep growing at a fast clip, and for the second quarter it projected that it will add just 5 million new members, an 8 percent drop year over year. The soft quarter comes as increased streaming competition looms for the company, with new entrants from Apple, Disney, WarnerMedia and NBCUniversal on the way.

The three-month period from April to June is also when Netflix is rolling out a price increase for the bulk of U.S. subscribers. The changes to the pricing plans, announced in January, have been taking effect in the U.S., Brazil, Mexico and parts of Europe. The company says the response in the U.S. “is as we expected,” with gross additions unaffected despite some short-term churn. 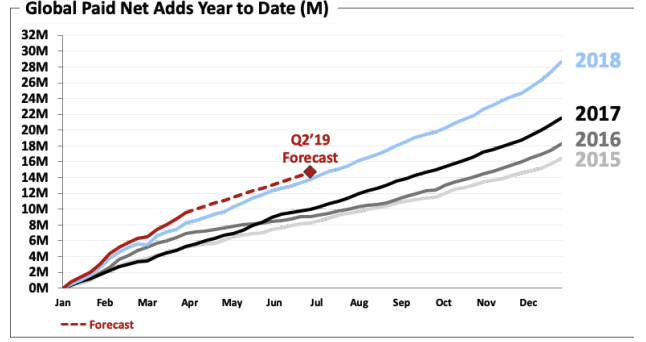 Investors are watching closely to see how Netflix’s subscriber base responds to new streaming services expected to inundate the market later this year. Less than a week before Netflix’s earnings report, Disney unveiled direct-to-consumer app Disney+, which will feature thousands of film and TV titles from the entertainment company’s library, as well as originals featuring IP from brands Marvel, Pixar and Lucasfilm. In order to launch Disney+, it announced plans to pull much of its licensed programming from Netflix, and it has priced the new service at $7 per month, $2 less than Netflix’s cheapest plan. On March 25, Apple laid out plans for its Apple TV+ offering, which will feature a slate of star-studded originals.

In a taped Q&A on Tuesday afternoon, CEO Reed Hastings brushed off concerns about competition, arguing, “There’s a ton of competition out there, and Disney and Apple add a little bit more. But, frankly, I doubt it will be material.”

One concern has been that, as the studios launch their own services, Netflix’s library of licensed content will shrink, making it a less compelling offering for consumers. A March report, for example, noted that Netflix originals accounted for just 11 percent of movie and TV titles in the U.S. service. Netflix executives have argued that they predicted that licensed content would become a smaller piece of their overall offering, which is why they have been aggressively investing in original programming. Chief content officer Ted Sarandos did so again on Tuesday, revealing, “If you look at our top 10 most-watched shows on Netflix, they’re all Netflix original brands.”

Netflix also addressed the competition in its shareholder letter, noting, “Recently, Apple and Disney each unveiled their direct-to-consumer subscription video services. Both companies are world-class consumer brands, and we’re excited to compete; the clear beneficiaries will be content creators and consumers, who will reap the rewards of many companies vying to provide a great video experience for audiences.”

The company continued that it doesn’t “anticipate that these new entrants will materially affect our growth, because the transition from linear to on-demand entertainment is so massive and because of the differing nature of our content offerings.” Netflix believes it will continue to grow as it invests in more content and the improvement of its service.

In order to invest in content, Netflix has been spending at a significant clip. During the first quarter of the year, the company grew its negative free cash flow of $460 million, compared with $287 million during the same period in 2018. It expects negative free cash flow to grow to around $3.5 billion for the year, due in part to taxes and additional investments in real estate. Netflix is currently in talks to acquire the Egyptian Theatre in Hollywood for an undisclosed price said to be in the tens of millions.

Another area where Netflix has room to improve is in its mobile experience. Product chief Greg Peters noted during the executive Q&A that Netflix has just a 2.4 percent share of the global mobile internet traffic. “The headline there is how much time we don’t win on the mobile experience,” he said, adding that it’s a way to attract new subscribers “even if they’re signing up for the service on mobile and watching on other devices, like the TV.”