Netflix added significantly more subscribers than expected during the third quarter of the year, bringing its total memberships up to more than 137 million.

The streamer also grew revenue by 34 percent to $4 billion in revenue during the quarter, in line with Wall Street’s expectations, and earned 89 cents per share, more than the 68 cents per share that was anticipated. The strong financial report drove the company’s stock up more than 13 percent during after-hours trading.

The third-quarter results marked a comeback of sorts for the company after a weak second quarter in which it added 5.15 million new members, below the 6.2 million it had previously forecasted. As expected, third-quarter growth in memberships was driven by international additions, where Netflix still has a lot of room to grow and attract new members. In the overseas markets, Netflix added 5.87 million memberships, while it added 1.09 million in the U.S. All told, it added 6.96 million members.

Netflix has long reported two subscriber figures: paid memberships, which includes just those people who are paying for Netflix every month, and total memberships, which also includes people using free trials or other promotions. The company said Tuesday in its letter to shareholders that paid additions are steadier because they are not skewed by promotions. As a result, Netflix plans to phase out the total memberships figure by 2020, when it will stop reporting on end-of-quarter free trials. As of the third quarter, Netflix has 130.4 million paid memberships.

The strong quarter was in part driven by the release of some high-profile projects, including To All the Boys I’ve Loved Before, which Netflix revealed is one of its most-viewed original films. The Lana Condor and Noah Centineo vehicle was part of what Netflix has dubbed the Summer of Love (other released included Set It Up and The Kissing Booth). Titles that were part of the Summer of Love were viewed by more than 80 million Netflix accounts.

The company also called out its ability to mint stars, showing how the Instagram followings for many of its titles’ top stars have grown. Stranger Things‘ Millie Bobby Brown, for instance, has added 17.6 million Instagram followers since the show first launched on Netflix in 2016. Centineo has added 13.4 million since the Aug. 17 debut of To All the Boys. 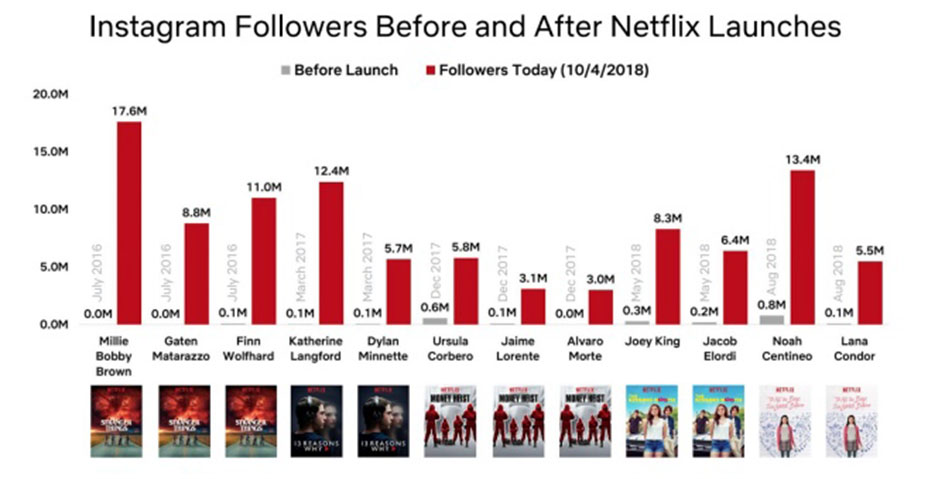 As Netflix has grown, the company has systematically focused on new genres of content, from building up its stand-up specials library to devoting more resources to unscripted programming. Its latest focus has been on feature films, following the appointment of Scott Stuber to run the group. But while Netflix has ramped up its work with high-profile filmmakers like Alfonso Cuaron (Roma) and Paul Greengrass (22 July), it is reiterating that its plan offers such projects to members first, or at least at the same time as theatergoers. (Cuaron’s Roma is set to open in 100 theaters worldwide on Dec. 14.)

“We support simultaneous release in cinema and on Netflix,” the company wrote in its shareholder letter, adding “we believe in our member-centric simultaneous release model for our original films and welcome additional theater chains that are open to carrying our films to provide the shared-viewing, big-screen experience to their customers who enjoy that option.”