Four weeks after this year’s Oscars, a mysterious letter arrived at the Academy of Motion Picture Arts and Sciences. The Antitrust Division of the U.S. Department of Justice had taken an interest in — of all things — the Hollywood awards season. In the preceding weeks, Netflix had earned 15 Oscar nominations, including its first for best picture (for Roma), incensing some of the streaming company’s traditional competitors. Executives at multiple studios began quietly discussing a proposed rule change for an upcoming meeting that would force Netflix to honor a more conventional theatrical release for its Oscar-contending films.

Enter Assistant Attorney General Makan Delrahim, a Trump appointee with a colorful history that includes executive producing the 2016 comedy-horror film Trash Fire and creating a concept for a reality TV series called Ultimate Justice. “If the Academy adopts a new rule to exclude certain types of films, such as films distributed via online streaming services, from eligibility for the Oscars … that rule could violate Section 1,” Delrahim wrote in a letter to Academy CEO Dawn Hudson, citing a section of the Sherman Anti-Trust Act, which prohibits anti-competitive agreements among rival companies.

Netflix has said it played no role in lobbying Delrahim to take up the company’s cause, and some of the streamer’s executives say they were as surprised as anyone to see the agency responsible for policing corporate goliaths chastising a nonprofit organization over who gets to collect its trophies. To many in the back-scratching towns of Washington and Hollywood, Netflix’s avowed purity here seems implausible. But multiple D.C. sources say that they believe Delrahim was indeed acting on his own to rattle the showbiz power structure. Indeed, the letter seemed to chill Netflix’s rivals — the Academy’s meetings proceeded without a single anti-Netflix proposal.

The skeptics are right to think that the streamer is working the levers of power in Washington, but they may be wrong about its methods. The attention-grabbing DOJ letter is atypical of Netflix public policy style — it prefers to draw as little attention to its increasingly complex, globe-spanning government relationships as possible.

Netflix has been evolving its public policy strategies in recent months to align itself more with Hollywood and less with Silicon Valley, a shift driven by the streamer’s maturation into a full-fledged film and TV studio, by its international expansion and by the intense scrutiny Washington is now applying to the tech companies. In January, Netflix abandoned its previous lobbying cohort, the Internet Association, which represents companies like Facebook and Google, and became the first streaming company to join the MPAA, which represents the major studios. The MPAA’s global reach gives Netflix a bargaining advantage on issues as varied as Latin American tax policy and new European laws regulating streaming companies.

“Netflix is a hybrid company,” says Gigi Sohn, who advised presidents Barack Obama and Bill Clinton on telecom issues and now serves as a distinguished fellow at the Georgetown Law Institute for Technology Law & Policy. “It’s not your typical Silicon Valley firm and not your typical Hollywood studio, and their policy positions reflect that.”

Because Netflix doesn’t sell ads or rely on user-generated content, it hasn’t faced the same controversies as Facebook or Google — like the one that led the Federal Trade Commission to slap a $5 billion fine on Facebook in July for its handling of users’ data. “Tech companies come with a lot of baggage,” says a policy strategist at one such company, explaining why Netflix sided with the studios. “Everybody has baggage, but the studios have less than tech.” Those liabilities have driven tech companies to drop record sums on domestic lobbying — Facebook spent $12.6 million on D.C. influence in 2018 and Google $21.2 million, according to the Center for Responsive Politics. By contrast, Netflix doled out only $800,000 for domestic lobbying (though the company spent much more internationally; those figures are not compiled).

Netflix, which hired its first lobbyist in 2010, now has 30 full-time staffers devoted to public policy, four of them based in Washington, with other offices in France, the U.K., the Netherlands, Canada, Australia, India, Singapore, Korea, Belgium, Italy, Germany, Spain, Brazil and Mexico. As it has expanded to 190 countries, Netflix has focused more of its public policy strategy internationally, where most of its growth lies and where it faces tenacious regulators. 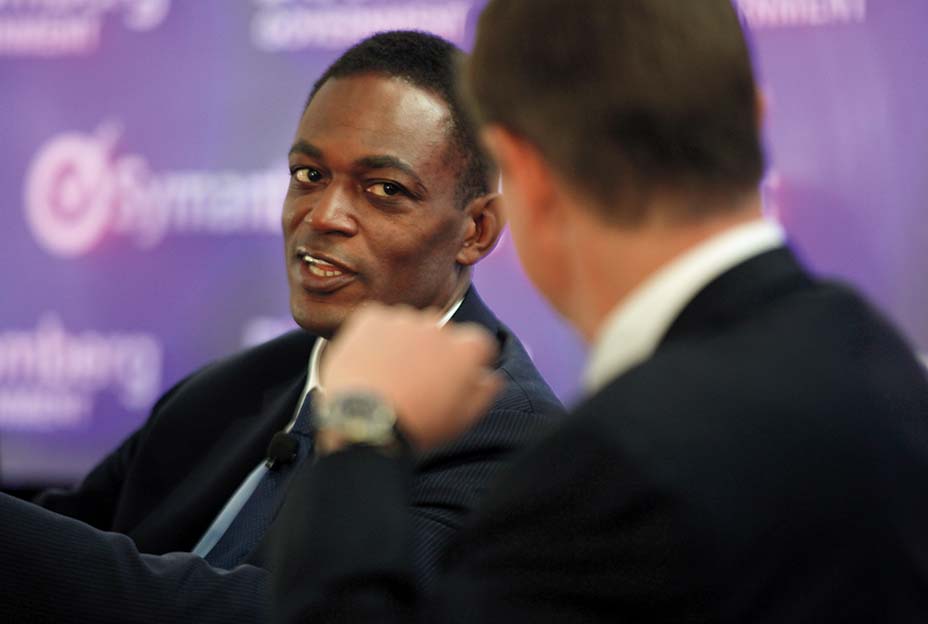 In March, Dean Garfield, the outgoing CEO of the Information Technology Industry Council, began leading Netflix’s public policy team from the streamer’s Amsterdam office — previous policy chiefs had been based in Washington. Garfield came to the job with some Hollywood bona fides; before ITI, he had worked as the MPAA’s chief strategic officer for five years.

In Washington, the company hires lobbying firms such as Baker McKenzie and Monument Policy Group to make its case to Congress on issues including internet privacy, intellectual property and the tax code. This spring, for instance, a Baker McKenzie lobbyist met with senators about a bill now in committee designed to simplify the taxing of digital services, which varies from state to state. Netflix executives Reed Hastings and Ted Sarandos consistently donate to political candidates, typically Democrats, and in perhaps the ultimate flex of soft political power, Netflix is also home to Barack and Michelle Obama’s production company, Higher Ground.

For years, one of Netflix’s core policy issues was pushing for net neutrality, rules that required internet service providers to offer equal access to their content. But by the time the Trump administration repealed the Obama-era laws that protected net neutrality in 2018, Netflix seemed to have outgrown the problem. Consumers have much more affection for the company that streams Stranger Things and Orange Is the New Black than they do for the companies whose pipelines deliver the service into their homes — and to hamper that delivery, many believe, would spark consumer ire. “As Netflix has grown, so has its bargaining power, so net neutrality has grown less important,” says Catherine Tucker, a professor at MIT Sloan School of Management. “Questions of piracy and copyright have now become more important.” But some believe Netflix has been too hasty in surrendering the net neutrality fight just as cable companies like Comcast and AT&T prepare to launch their own streaming services. “They’re being short-sighted and ignoring the history of how these network operators behave,” says Sohn. “There’s more incentive now to discriminate against Netflix.”

In Europe, where Netflix lobbyists meet regularly with EU commissioners and staff, the company will have to comply with a 2020 law mandating at least 30 percent of its content be of European origin, like its German show, Dark, and Spain’s Las Chicas Del Cable. In France and Germany, Netflix contributes a portion of its revenue to local production subsidy funds, just as European broadcasters do. The company is pushing back on some of Europe’s demands, however — in July, Netflix U.K. director of public policy Benjamin King testified in Parliament there, calling a proposed tax on VOD companies “a solution in search of a problem.” Netflix is closely watching EU policies on artificial intelligence regulations, which could block the company’s algorithm-driven recommendation engine, and pricing guidelines, which would force it to offer its service for the same price across the EU. 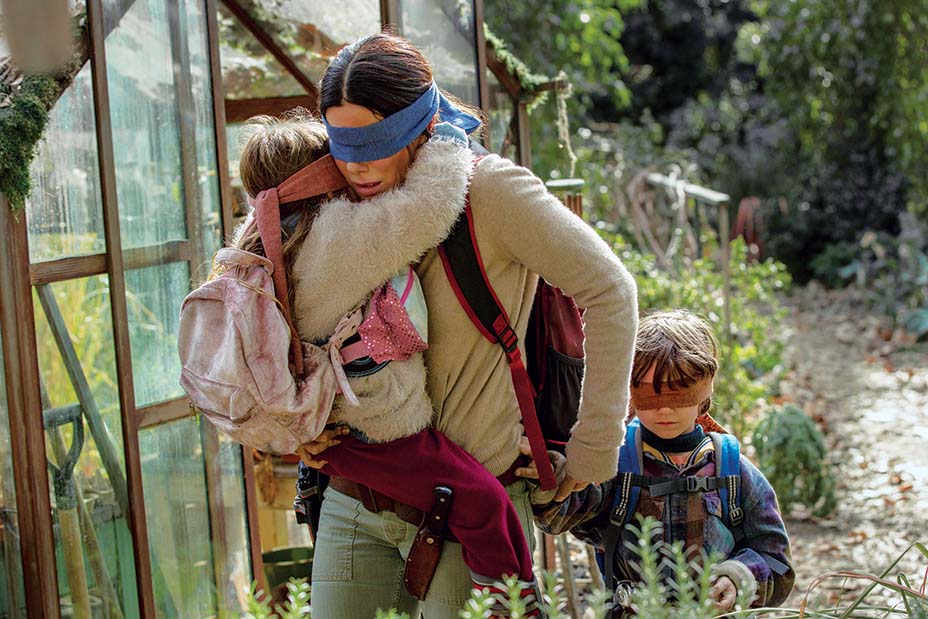 Some of Netflix’s government relations work involves containing controversies, and not always gracefully. In January, the Quebec government requested that Netflix remove stock footage used in Bird Box depicting a real-life 2013 oil-train disaster that killed 47 people in the town of Lac-Mégantic. When the company sent a letter to Quebec’s culture minister saying it cannot make changes to “finished content,” the Canadian Parliament responded by unanimously passing a resolution demanding the removal of the footage. Though the move was nonbinding, Netflix had reason to heed the lawmakers: Canada is its third largest market, a place where Netflix has agreed to spend $380 million on locally made content, and Canada is in the midst of a federal review of its broadcasting and telecommunications legislation intended to update the laws for the internet age. By March, Netflix backed down and removed the offending footage.

Where competitors like Disney and WarnerMedia largely seek to export their U.S.-made content, Netflix is more interested in producing its international content locally. One of the most important tasks of Netflix’s public policy team is working with local producers and government officials to create ratings systems for its content that vary by country, a proactive means of heading off direct government intervention. In late 2018, the company bowed to pressure in Saudi Arabia when officials demanded that it remove an episode of Hasan Minhaj’s Patriot Act in which he criticized the country’s leader, Mohammed bin Salman. Netflix relented “to comply with local law,” according to the company’s statement. While the company does not have a lobbying office in the Middle East, that’s likely to change.

Scott Roxborough and Etan Vlessing contributed to this report. 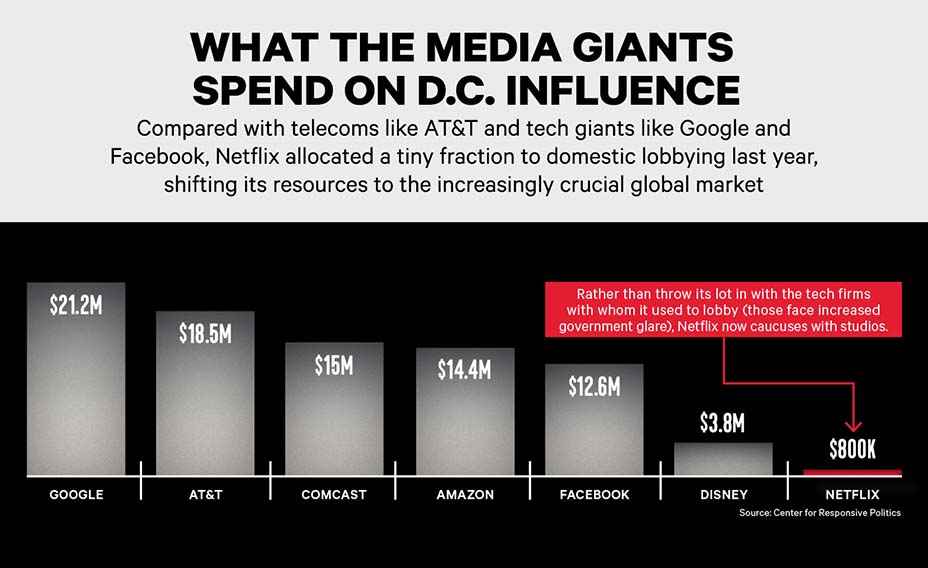 Cord-Cutting Speeds Up as TV Providers Scramble to Boost Profits