Netflix’s recent cancellation of the big-budget series The Get Down and Sense8, along with its growing investment in original programming, have ignited new criticism about the streamer’s spending habits and financial health. As CEO Reed Hastings invests approximately $7 billion in content in 2017, some in the media are painting Netflix investors as credulous, sitting idly by while the company spends like a drunken sailor.

At the recent ATX Television Festival in Austin, The New York Times reported that Freeform programming and development executive vp Karey Burke said she viewed Netflix’s spending “with disdain.” Another exec suggested invoking a television industry rule that “everyone has to be profitable,” a dig at Netflix’s negative free cash flow. Michael Pachter, a Wedbush Securities analyst who remains an unrepentant Netflix hater despite having been wrong on the direction of its stock for a decade, continued his crusade against the company in a recent THR article by calling the Netflix balance sheet “unfathomable.”

As a long-term Netflix shareholder, I will offer a few counter-arguments for critics to consider:

Netflix is conservatively capitalized and financially strong. The company’s $4.8 billion debt level is moderate relative to its $70 billion market value, and it’s less leveraged on a debt-capital ratio than most of its media peers. As evidence of its financial strength, Netflix recently issued 1.3 billion euros ($1.49 billion) worth of bonds at 3.625 percent, maturing in 2027. The bond market is willing to finance Netflix at low rates and long maturities because it has established a durable subscription-based business model, with predictable revenue and cash flow. On July 17, Netflix reported adding 5.2 million subscribers during its most recent quarter for a total of 104 million globally. On the other hand, the financial performance of Netflix’s media peers has become more unpredictable due to cord-cutting, advertising headwinds and U.S. box-office volatility.

There is an intense focus on Netflix’s content spending. But what gets no attention, and is perhaps more interesting, is where Netflix does not spend money. Unlike almost all of its media peers, Netflix spends nothing on a large sales team in order to sell advertising against its programming. Because TV advertising is an increasingly intolerable nuisance, this expense creates little value for consumers. Netflix also spends virtually zero to drive opening-weekend box office for its original films, a growing expense incurred by the major studios that provides no value to the scores of people who don’t live near a theater showing the film. Netflix runs its business with about 4,700 employees; CBS has 15,500, Time Warner has 25,000. Netflix’s expenses are not earmarked to support large legacy cost structures. Instead, it is spending on what matters most to consumers: content.

Netflix’s $7 billion investment in content yields more than new programming, including a company-best 91 Emmy noms this year, second only to HBO: It drives global adoption of internet television, serves to aggregate more data on consumer entertainment preferences and builds long-term library value. Sense8 may be over (except for a planned movie to end the story), but its run likely awakened a whole new group of consumers to the benefits of web-delivered TV. The return on that awakening is not captured on the balance sheet but will pay dividends to Netflix for years. 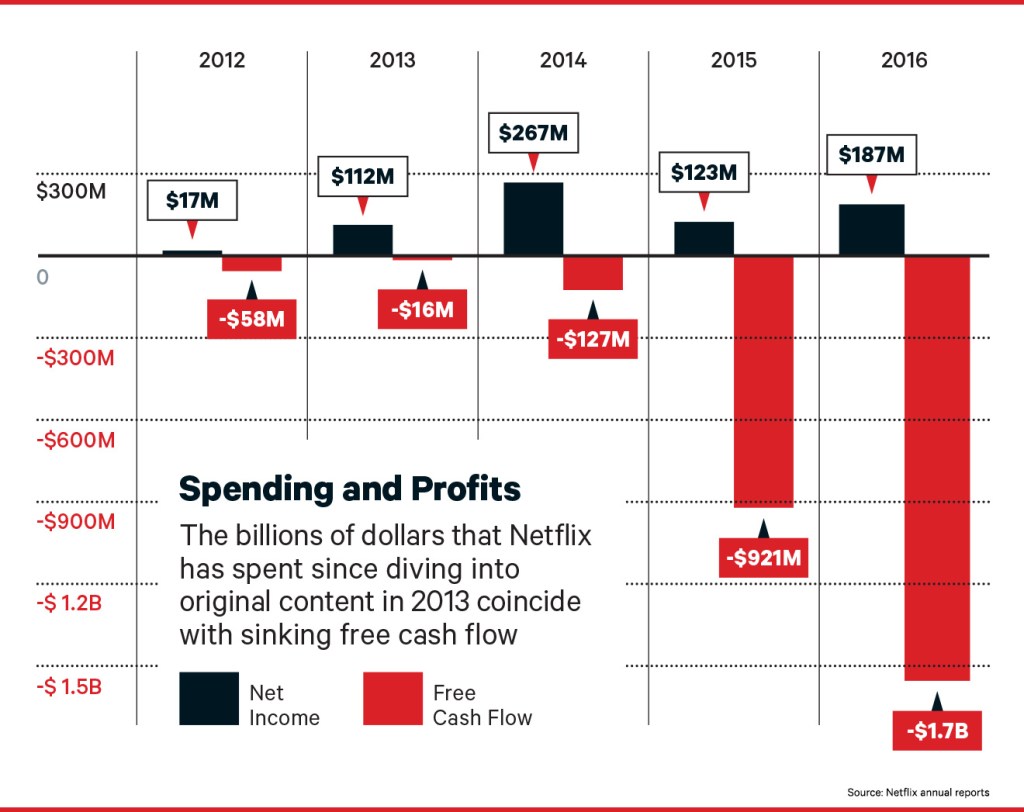