For as long as Bela Bajaria could remember, she had wanted to run a studio. “That was the track,” she says, “the goal from the moment I got into the entertainment business.”

And for half a decade as president of Universal Television, she did just that. “And it was everything I wanted it to be,” she says now, before recounting the personal and professional recalibration that she underwent in the spring of 2016, after that dream job was taken from her amid tensions between the studio and its sibling network NBC.

“You go through the reflection of where your identity is wrapped up and not wrapped up and all of the things you want to achieve,” explains Bajaria, 47, suggesting it was “liberating and terrifying because suddenly I didn’t know what my track was.”

The next five months or so entailed a lot of meeting and listening, which led her to Netflix chief content officer Ted Sarandos. The two had worked together on the breakout comedies Master of None and Unbreakable Kimmy Schmidt, both Universal TV productions, and now he was offering Bajaria a significant role at the streaming giant, which has more than 117 million global subscribers and an annual content budget approaching $8 billion. His pitch: Launch an unscripted division (comprising reality and talk) and a co-licensing model that gives Netflix the global rights to stream shows everywhere but the U.S. the day after they air domestically.

Bajaria, a married mother of three and the industry’s highest-ranking Indian-American executive, began at Netflix in late 2016 and has been busy building out her team and portfolio, which includes a Queer Eye for the Straight Guy reboot, a talk show from David Letterman and the international rights to shows including Star Trek, Riverdale and USA’s The Sinner. Just back from the Super Bowl, where the Los Angeles-reared executive was rooting for the New England Patriots, who lost in an upset to the Philadelphia Eagles, she gave her first wide-ranging interview in her cozy office at Netflix’s new Hollywood headquarters.

What was the best advice you got in those months post-Universal TV?

In the six months in between, I probably learned the most I ever have about myself and my career. A lot of people told me, “You’re going to feel like you want or need to rush into your next job, but actually use that time.” And then Kevin Reilly told me [being fired] was a rite of passage and now I’d finally made it in the business, which I appreciated. (Laughs.)

You’re building out a co-licensing division. Give me the elevator pitch.

We’ve gone studio to studio saying, “We believe in this show, and we want to support this writer’s vision. You already have a domestic network, and now we want to partner with you and offer first run to our members internationally.” We’ve done it with Star Trek with CBS All Access, Riverdale, Dynasty, Unsolved with Universal Cable Productions. We come in at different points in the process: Sometimes it’s a script, sometimes it’s been a pilot. It’s an interesting opportunity, and it’s afforded certain shows to go straight to series and increased production value because we come in early to partner.

What was the biggest adjustment in moving from a traditional company like NBC to Netflix?

One of the things I’ve noticed is that at other companies, we talked a lot about selling shows internationally as being global — and you have to for it to all make sense. But this here is truly global; everything you do is going to be launched everywhere in the world at the same time, and so you really have to reorient your mind. It’s no longer “the U.S. is the most important and then we’re going to sell it internationally” because it’s not an afterthought here. It’s funny because we’ll be talking about co-licensing shows, and people [elsewhere] will say, “Oh, but you don’t have first-run U.S.,” and it’s like, “Right, but we have first run for the rest of the world!”

How does that global base impact your programming choices?

Erik Barmack, who does international originals, is focused on making shows for [specific] regions and then hopefully they’ll be big enough to travel. For our group, what we find is really great U.S. shows travel, so we don’t try to reverse engineer. [On the unscripted side,] there are a few things we’re looking at now that will probably be really great in certain regions but hopefully are good and cool enough to work beyond that. For example, we’re doing a show with Marie Kondo, which is basically how to organize and de-clutter your life. She has a massive following in Japan, but [if you assume] everybody wants to know how to tidy up and de-clutter, that could be a great global show.

Every year at the L.A. Screenings, you hear international buyers talk about how serialized dramas or programs with primarily black casts won’t travel. Are these things not true on Netflix?

For our platform, it’s different. I get that for linear networks and certain regions on free TV, there are certain things that work and don’t work, like procedurals versus serialized shows. But if you’re signing up for Netflix, you are having a different experience. We like to believe people from all over like great shows, and there could be a middle-aged woman in Mumbai and a teenage boy in Wisconsin who have very similar tastes, so we shouldn’t just bucket them by demo or what we think that that group will like.

A lot of reality television, particularly competition shows like The Voice, relies on live or semi-live, an area Netflix hasn’t touched. Will you?

We think about it. And what’s interesting about this company is that there’s so much innovation, so if the most amazing show walks in the door and we think we should have it, then we’re able to go, “OK, how do we do that? Let’s figure it out.” There’s definitely an openness to do it.

Chelsea Handler was the service’s guinea pig with her weekly talk show. What did you learn?

We learned some logistical things, like how you turn a talk show around that quickly and globally, and a lot about social. I wasn’t there for that first year where there was the [mind-set of], “Oh we don’t put clips out,” but we learned if you want to be part of the conversation, you have to put those out [on YouTube and other social platforms].

In my extensive internet research, I learned that you were crowned Miss India Universe in 1991. What was your “talent”?

I did an Indian dance. (Laughs.) I buried [this chapter of my life] for a long time, but it’s true. And I had to first win California, then the U.S. and then Universe, so it was a whole thing. I did it to meet other Indian girls because I grew up here, and I didn’t really have Indian friends. And then I won, and I didn’t want to be an actress or a model, so I decided I’d use the title and the access to start a nonprofit [that helped children in poor countries], which I did for four years before I joined CBS.

SO, WHAT EXACTLY IS A NETFLIX TALK SHOW?

“It’s not a one-size-fits-all, format wise,” says Bajaria of her latest push. 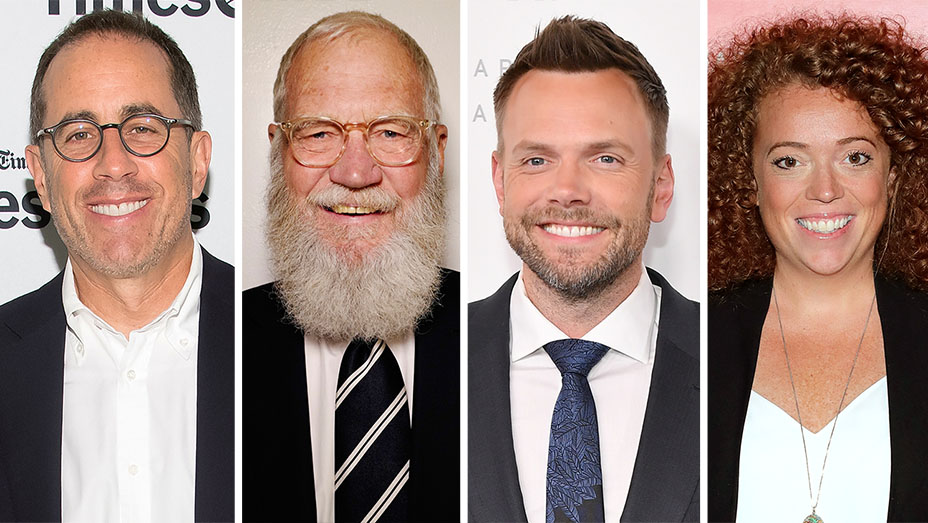 COMEDIANS IN CARS GETTING COFFEE

As part of a $100 million megadeal that included stand-up specials, Netflix bought the library as well as a new season of Jerry Seinfeld’s shortform talk show. Forthcoming episodes could run longer than previous seasons.

Consider the weekly topical half-hour, launching Feb. 18, the Netflix-ization of his show The Soup. McHale will take a sharp, absurdist look at global pop culture, with star guests, comedy sketches and clips.

MY NEXT GUEST NEEDS NO INTRODUCTION

Letterman’s next act became six 60-minute interviews with people who interest him, from George Clooney to President Barack Obama. Asked whether she’d like more, Bajaria says, “If he’ll do more.”

While the details are still being sorted, the Daily Show correspondent is heading to Netflix. “With people like Michelle, the format’s based on who they are,” says Bajaria. “Where they are in their lives and what they’re passionate about.”