Fox’s Jan. 27 rendition of Rent lapped up attention for its injured star, but broken-footed Brennin Hunt may heal faster than the live musical format.

A week after Rent became the genre’s lowest-rated entry, NBC — the network that kick-started the trend in 2013 with The Sound of Music Live watched by nearly 20 million viewers — abandoned plans for a May staging of Hair.

The musical, which explores drugs, race and sexual identity, was supposed to take the place of NBC’s twice-delayed Bye Bye Birdie, which now sits in live-event purgatory alongside a planned production of Aaron Sorkin’s A Few Good Men. Over at ABC, there’d been an attempt to mount The Little Mermaid Live, but that, too, was quickly abandoned.

So what happened to one of TV’s hottest genres? Many stress how key a title can be, noting that not every one will translate. Take the AIDS-themed Rent, which, like Hair, seemed to lack the broader, family-friendly appeal of predecessors like NBC’s Peter Pan or Fox’s Emmy winner Grease.

In fact, after Rent drew fewer than 4 million viewers, insiders say NBC execs had second thoughts about Hair (with its famous nude scene) as the appropriate follow-up to 2018’s Jesus Christ Superstar. The decision came as casting already was underway, with Hailee Steinfeld having passed on a starring role. Ultimately, says a source close to the production, “It wasn’t a title advertisers knew.”

Fox, for its part, has no immediate plans for a Rent follow-up. Not only is the network’s go-to producer Marc Platt (Grease, Rent) tied up in a deal at 20th TV, which means his affiliation soon will be with Disney rather than Fox, but also the network’s new chief, Charlie Collier, has acknowledged the format’s limitations. “We love musicals,” he said recently, “but it’s a very tough business.”

Tough and pricey. Multiple sources estimate that previous NBC productions have cost as much as $20 million, though another source insists they fell in the $10 million to $14 million range. Hair, which was greenlighted under former NBC Entertainment chairman Bob Greenblatt (who was to have exec produced), is said to have been earmarked with a more conservative $10 million budget.

Over at Fox, live entries have run as much as $15 million, with sources noting that Rent and A Christmas Story came in lower because they lacked major stars. Still, all these productions cost considerably more than a traditional hour of scripted TV and historically have offered little by way of ancillary value (few, for instance, have sold internationally) or repeatability. Add to that the challenges of casting, including the months-long commitment, potentially low visibility and risk of being “hate-watched” (see The Sound of Music).

None of this is to say the genre is going away entirely. “Absolutely not,” stresses a source in the space. “In the same way comedy or drama has been ‘dead’ in the past, you’re only as good as your next attempt.”

Indeed, with the right title and execution, live musicals can still prove a major awards draw. Moreover, advertisers historically have been willing to pay a premium for them (at one point, NBC was reportedly seeking as much as $350,000), and affiliates tend to be high on shows that drive live viewership. As one exec puts it: “Live is considered meaningful for affiliates, and broadcast networks are affiliate-dependent. Sometimes you need meaningful, live events — sports, awards shows, musicals — that illustrate broadcast is still relevant.”

Looking ahead, NBC is in talks for three titles — though it’s unlikely to air any in 2019. And while Fox is taking a wait-and-see approach and CBS continues to show no interest in the genre, ABC is considering fresh takes. In fact, thanks to the success that big-screen musicals like Mary Poppins Returns have delivered to its sister film studio, ABC’s new chief, Karey Burke, reveals to THR that she’s discussing a possible original production.

“I’m not swayed by the cooling-off,” Burke says. “Any time there’s a genre that explodes, things can start to feel less special.” 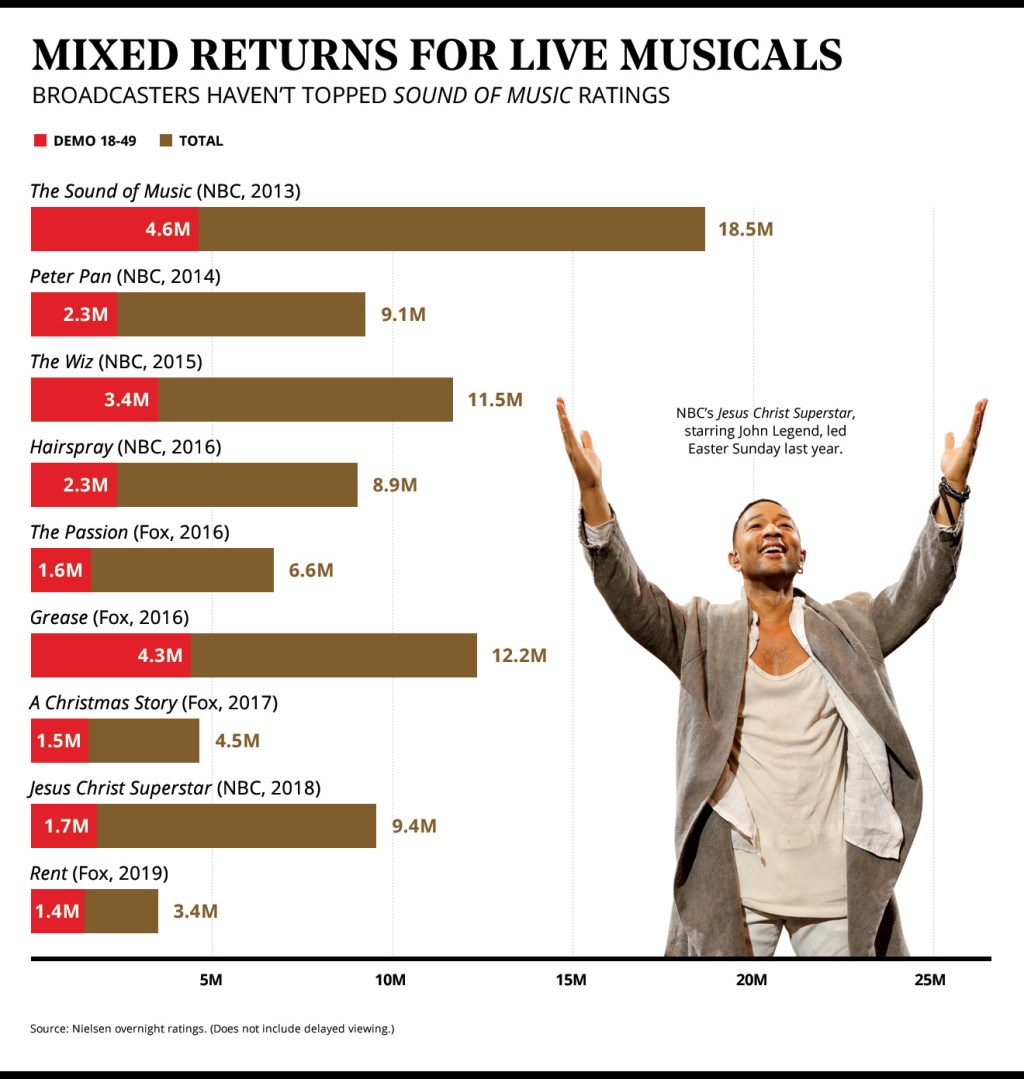