At the start of next year, Netflix will no longer have rights to The Office as NBCUniversal’s Peacock becomes the exclusive streaming outlet for the beloved comedy. It’s a big loss for Netflix in one sense, as the series accounts for billions of minutes of viewing time on the service. Then again, maybe Netflix users will just flip over to its other acquired shows like Grey’s Anatomy, Criminal Minds or Schitt’s Creek, all of which are mainstays in Nielsen’s weekly streaming rankings.

A Hollywood Reporter analysis of 15 weeks of data from the Nielsen ratings service’s new, closely watched Top 10 Streaming chart shows the staying power of Netflix’s deep library — and the boom-and-bust cycle of the binge-release model.

Nielsen started its rankings of streaming programming the week of Aug. 3-9, and Netflix has dominated the top 10 thus far (at the moment, the rankings cover Amazon Prime Video, Disney+, Hulu and Netflix, with other streamers to be added in the future). Of 150 possible spots through the week of Nov. 9-15, Netflix occupied 139 of them — 93 percent.

Of those 139 slots, more than half were taken up by five Netflix-acquired shows: The Office, Grey’s Anatomy and Criminal Minds made the top 10 in all 15 weeks, NCIS was in there 11 times and Schitt’s Creek was in there eight, including three weeks at No. 1 — the only acquired show to top the rankings. Shameless has appeared seven times.

On average, acquired shows occupy six slots in the top 10 each week, compared with four for original series. In none of the 15 weeks of rankings have originals made up more than half of the list. (Streaming platforms, for their part, have repeatedly said that Nielsen’s methodology doesn’t capture the full scope of viewing on devices other than TV sets, nor do the rankings, which account for only U.S. viewing, measure viewers in other countries.)

Nielsen ranks streaming shows by total minutes of viewing time for all episodes, so series with expansive libraries have a bit of an advantage. Several original movies, including Disney+’s Mulan, Netflix’s Project Power and Enola Holmes, and Amazon’s Borat Subsequent Moviefilm, have made the list, and a trio of series following weekly release models have enjoyed fairly long runs in the rankings.

Amazon’s comic book series The Boys held a spot in the top 10 for six weeks in September and October, tying Netflix’s Lucifer for the longest run to date for an original series. The Great British Baking Show, whose episodes premiere weekly on Netflix after airing in the U.K., is at five weeks, and the first three weeks of The Mandalorian’s second season on Disney+ all ranked third. (Streaming rankings lag a few weeks behind airdates, so the Baking Show and The Mandalorian could end with equally long streaks once the ends of their seasons are recorded.)

The top 10 lifespan of a binge release series, however, is shorter. Through the 15 weeks of Nielsen’s rankings, the average show released in a block lasts just three weeks on the list. The Umbrella Academy had the single most watched week of any streaming show, with Netflix users watching 3 billion minutes in the week of Aug. 3-9, just after its second season debuted. By the beginning of September, it had dropped off the list. In contrast, The Boys — which made its first chart appearance the week The Umbrella Academy dropped off — fell only 38 percent from its peak in the week of Sept. 7-13 to its low point three weeks later, then rose again during the following week of its second-season finale. That’s not to say the weekly release model necessarily works better for streaming shows: The Umbrella Academy racked up more viewing time in its four weeks in the top 10 (6.67 billion minutes) than The Boys did in six weeks (4.8 billion).

Yet the 15 weeks of Nielsen streaming rankings reaffirm Netflix’s early streaming advantage over its rivals. As of now, the service’s healthy subscriber lead in the U.S. and robust content pipeline command the lion’s share of streaming users’ time. 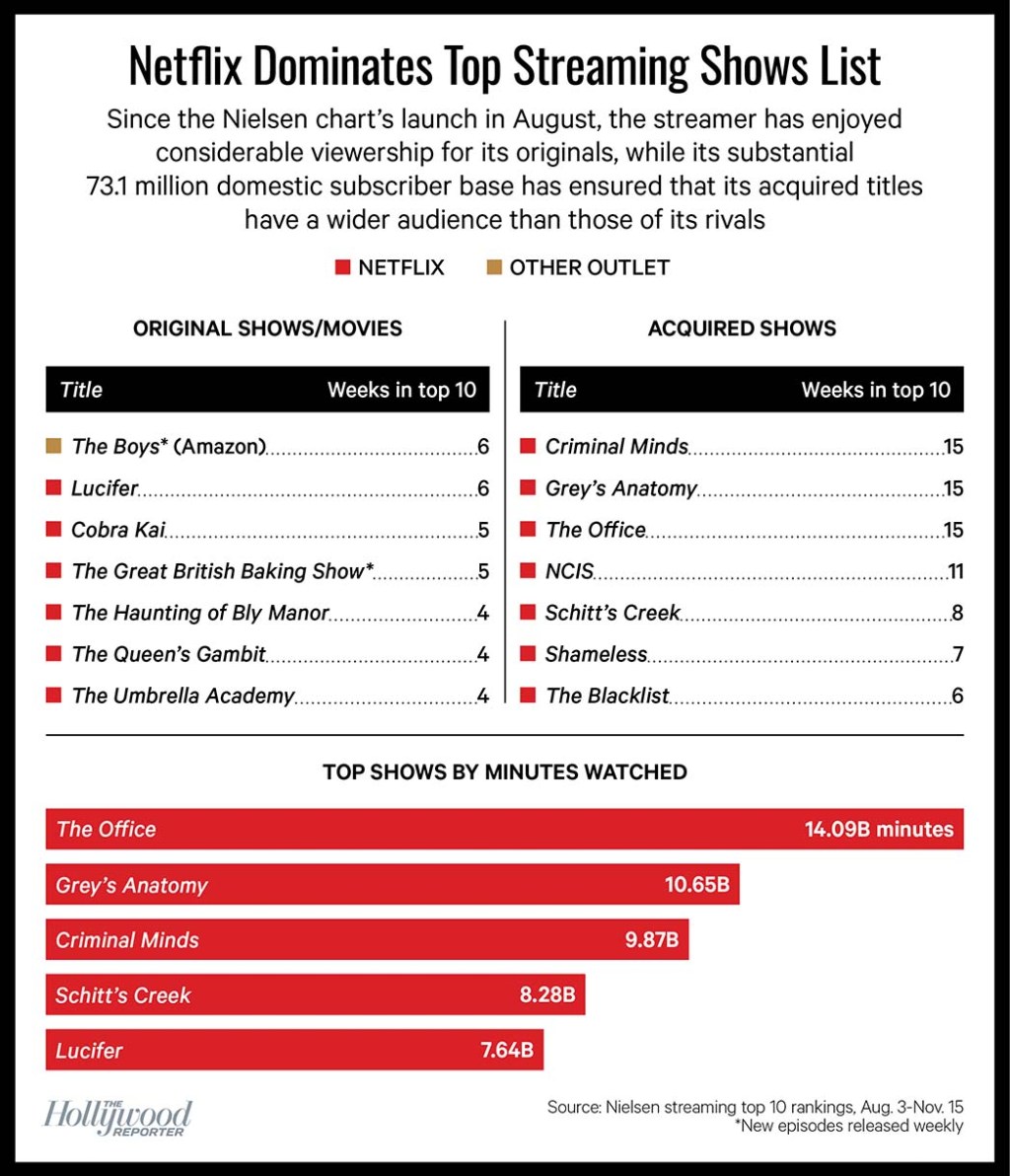