[This story contains mild spoilers from an early episode of season six of Netflix’s Orange Is the New Black.]

When the sixth season of Orange Is the New Black kicks off, a federal officer investigating the Litchfield riot tells his staff: “Let’s prosecute a rainbow, shall we?” For the prisoners of the Netflix prison dramedy, things only get worse from there.

The sixth season opens one week after the emergency response team stormed Litchfield, effectively ending the three-day long riot that consumed the fifth season. Now, the most high-profile inmates involved in the riot have been sent down the hill to Litchfield’s maximum security facility, known as Max. Not only are they subject to a federal investigation pressured by an embarrassed governor and a desperately rebranding corporation, they also face a new heap of guards who are ready to enact their own kind of punishment within the maximum security grounds.

The scenario is quickly summed up by a new guard, who happens to be an old friend of Taystee’s (Danielle Brooks) and who tells Taystee that her “team” of inmates killed two people on theirs: correctional officers Piscatella (Brad William Henke) and Humphrey (Michael Torpey). Two guards are dead, which means inmates are going to pay.

While Daya (Dascha Polanco) faces consistent physical abuse for her role in Humphrey’s death, the rest of the segregated inmates in Max are brought in for questioning, where they can either turn on each other or accept a plea deal and face added time. The plight facing the “rainbow” of inmates quickly separates the privileged prisoners from the rest, putting prisoners like Taystee, Cindy (Adrienne Moore) and Blanca (Laura Gomez) in more precarious situations than Piper (Taylor Schilling) or Nicky (Natasha Lyonne), whose families can afford options for better legal counsel.

While the inmates are grappling with their future and the idea of betraying prison-family bonds, another unknown threat is swirling around them: “Fantasy Inmate,” which is Fantasy Football with a prison twist. Instead of betting on players, the COs draft inmates for their team based on who they think will get them the most points for infractions: everything from a fight to an overdose or a suicide — which is a whopping seven points. While the game was a fictional idea that sprung from the Orange writers room when looking for a gaming element for the season, its existence encourages inmate-on-inmate violence and highlights a new level of ineptitude from the guards for the rest of the season.

“From the research we’ve done, one of the things we want to make sure people understand is that abuse is rampant,” executive producer Tara Herrmann tells The Hollywood Reporter. “Fantasy Inmate was a way to do it in a more digestible way to really get to a serious point.”

A newly published study has found that sexual abuse and misconduct in U.S. prisons had tripled in 2015 and that 42 percent of the incidents reported were perpetrated by staff members. Orange has long highlighted abusive relationships between inmate and guard, most notably through Daya and the three-season reign of CO Mendez, aka Pornstache (played by Pablo Schreiber), as well as the controversial relationship between Pennsatucky (Taryn Manning) and CO Coates (James McMenamin). When Pornstache exited and CO Piscatella (Brad William Henke) rose in his place, his leadership style fostered such an abuse of power that one of his guards murdered an inmate, Poussey Washington (Samira Wiley), sparking the riot of season five and fallout that plays out in season six.

As Orange has grown accustomed, a new set of guards have been cycled in, along with some familiar faces like Luschek (Matt Peters) and McCullough (Emily Tarver), for season six. Right off the bat, one of the new male guards establishes himself as a Pornstache-in-training, as he forces Gloria (Selenis Leyva) and Ruiz (Jessica Pimentel) to put on a sexual show for him in the shower. Taystee is also physically beaten up by the new guards for her role in the riot and Suzanne (Uzo Aduba) is denied her medication by the investigators, prompting a series of hallucinations that make up the season’s fantasy-sequence opener. 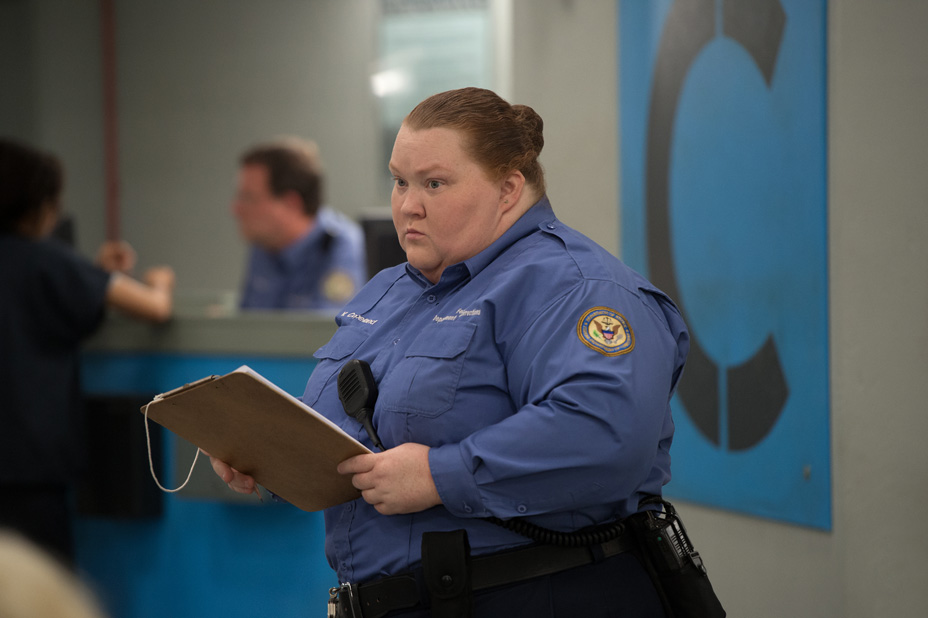 The new guards are led by the duo of CO Ginger (Shawna Hamic) and CO Alvarez (Nicholas Webber) and though they are as incompetent as ever, they are also the biggest drivers of the sadistic Litchfield draft — one cog in the corrupt for-profit prison system of season six.

“With season one, one of real Piper Kerman’s biggest notes was, ‘You guys are humanizing the guards too much,’” Herrmann explains of the evolving role the guards play on Orange. “This season, one of the themes that we were loosely playing with is two truths coexisting in one place — which I think our country is also trying to figure out right now. We humanize the guards because we want to be able to laugh at them and with them, because they’re humans, too, and people have to have jobs. But along with the idea of the two truths coexisting in this one place of prison, the guards don’t come in there to be bad people. But I think that world creates good and bad on both sides.”

She adds, “Some of the inmates come in and they end better than when they got in, and for others, that system and the way they’re treated, obviously, can turn people worse for wear at the end. So while we don’t ever want to completely make it seem like all those guards are great and just trying to do their jobs, we do want to make sure they seem like humans and that they’re wrestling with decisions themselves.”

Though the guards tend to bring with them moments of levity, the circumstances facing the inmates only get more serious as the season goes on, reflecting the reality of what many prisoners in the U.S. criminal justice system face. “We will always find within the episodes those moments of comedy, but I’m glad that we are taking a more serious look at the prison system in general,” says Herrmann of the path the series is on.

What do you think of Orange in Max? Sound off in the comments, below, and head to THR.com/OITNB for more Orange Is the New Black season six coverage (the full 13 episodes are now streaming on Netflix).