Continue to The Hollywood Reporter SKIP AD
You will be redirected back to your article in seconds
Skip to main content
July 31, 2018 6:00am
Logo text

[This story contains major spoilers from the entire sixth season, including the finale, of Netflix’s Orange Is the New Black.]

Orange Is the New Black is ready to breathe in some fresh air.

After spending six seasons on the minimum and, now, maximum security prison grounds of Litchfield Penitentiary, Piper Chapman (Taylor Schilling) is returning to life on the outside. The finale of the sixth season (which launched its 13 episodes Friday on Netflix) set Piper free on early release, thanks to a little bit of prison-privatization oversight and a whole lot of white privilege.

Piper celebrated her last day at Litchfield Max with a surprise prison wedding to Alex Vause (Laura Prepon) and a brief, revelatory moment where she watched the warring inmates put their cell-block colors aside to enjoy an afternoon of kickball together, a game Piper had spent her final days pushing through to fruition. Her feelings about leaving prison were bittersweet, since she thought she would have five more months with Alex, who still has four years left on her sentence.

The Jenji Kohan-created prison dramedy has already been renewed for a seventh season; a three-season renewal was handed down ahead of season four. Now, viewers who are left wondering what Orange will look like with Piper on the outside can take solace in knowing that, as is Kohan’s motto, there is still more story to tell.

“Jenji knew that she wanted to get Piper out at the end of this season coming into season six,” Brian Chamberlayne, who wrote the finale episode, “Be Free,” tells The Hollywood Reporter. “She liked the surprise of it, and she wanted to be able to tell stories about post-prison. It wasn’t just a season-six end, it was partially about getting into the arc of where Piper goes. It’s about what is significant about the criminal justice system and what is significant about Piper’s story and journey, so there’s plenty to be told.”

Chamberlayne directs viewers to the final line of dialogue as the biggest tip-off about where the Piper-centered show plans to go from here: “The final moment of the season leads us there, when Cal asks Piper, ‘So what are you going to do next?’ “

Executive producer Tara Herrmann told THR that Orange plans to follow Piper’s life on the outside just as much as it followed her on the inside. “She’s the grounding force of the show,” she said of the character portrayed by Schilling.

Herrmann now elaborates, acknowledging both the end of an era and an opening to other storytelling possibilities. “We’re very excited because now we have a few people on the outside, Aleida Diaz [played by Elizabeth Rodriguez] being one of them, and to be able to show the juxtaposition of what life is like for someone in Aleida’s shoes compared to somebody who is in Piper’s shoes is very exciting for us,” she says.

Chamberlayne adds, “It’s a piece of the story that needs to be told. It’s an uncharted territory that allows us to explore different ideas and different struggles — and also different happy moments as well.” 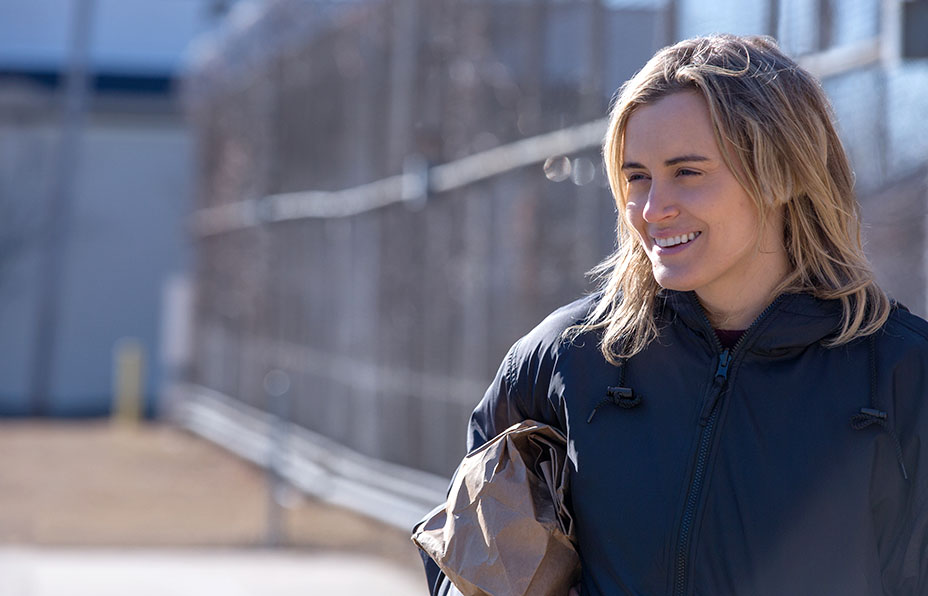 Orange has long paralleled the journey that Piper, a privileged white inmate, faced in prison compared to the experiences of the non-white, less-privileged inmates she encountered on the way. The sixth season highlighted the divergent paths between Piper and Taystee Jefferson (played by Danielle Brooks) in heartbreaking fashion. In the finale, as Cal Chapman (Michael Chernus) drove a free Piper away from prison, a van carrying a shackled Taystee was returning. Taystee, a black inmate, had been unjustly convicted of second-degree murder for the death of corrections officer Desi Piscatella (Brad William Henke) and will now be serving out a life sentence.

The hair salon conversation between Piper and Taystee, in the 11th episode, “Well This Took a Dark Turn” (which was directed by Prepon), was meant to be a turning point ahead of Piper’s release. “That was, as a room, something we leaned into as one of the most important moments of the season,” said Chamberlayne. “Especially for Piper’s arc in prison, to come out of it with this understanding that yeah, she got it hard in prison. People didn’t let up on her. But so many of these women have it hard on the outside, and that’s part of the reason they went after Piper in prison. This contrast of her fish-out-of-water story, which is for minorities and people who are underprivileged classes, that’s constant. That’s the world that they inhabit every day.”

Since the Netflix series is based on the true story of Piper Kerman, viewers could look to Kerman’s post-prison story for hints about where Orange‘s Piper might go. After serving 13 months of her 15-month sentence in a minimum security prison, Kerman wrote her memoir of the same name, inspired the Netflix TV show and continues to be an activist for prison reform. Midway through Orange‘s sixth season, Piper the character even suggests that she should write a memoir to “expose” the system.

“In my mind, it feels like our Piper has sort of been an Alice and Wonderland, and now she’s somersaulting out of that world. I do think it will take time for her to sort of get her bearings,” says Herrmann of Piper’s potential path to activism.

Kerman remains a consultant on Orange. But since season two, the Netflix series has significantly veered from her memoir to create its own fictionalized world through TV Piper’s experience. Piper’s release could provide an opportunity for the two stories to meet up once again.

“Since season one, we have joked, ‘Maybe the finale is an actress coming in to pitch Jenji Kohan!’ But I don’t think we’re going to go quite that meta,” says Herrmann with a laugh. Though she wouldn’t entirely rule out the possibility of a memoir turning up on the show, she adds, “We’ve always been inspired by Piper Kerman’s story and respect the work that she’s doing now, so I hope we can do justice to that. But we want to keep a grounded world.” Chamberlayne adds: “You want to be true to the character; you don’t want to make the mistake of writing what it was like for Piper Kerman to get out of prison.”

In speaking to both Herrmann and Chamberlayne, it sounds likely that the seventh season of Orange will continue to follow the lives of those who are still incarcerated in Max while also tracking Piper and Aleida on the outside. Orange has a history of showing how difficult the concept of freedom and re-entry in society can be, and Piper’s path can continue to serve as a pointed contrast to the struggles of other inmates. Aleida has returned to selling drugs in order to make enough money to pull her other children from foster care, and as viewers will recall, Taystee was once so lost without her prison family that she violated her probation to return to Litchfield. Alex also references her failed attempt at probation when saying goodbye to Piper.

'Orange Is the New Black': Inside That Surprise Wedding

The sixth season finale also opened the door for Orange to go inside immigration detention centers, as Blanca Flores (Laura Gomez) is now facing deportation after the supersized finale’s other devastating and timely gut punch. The show even threw out its own timeline to set the season in 2018.

“This is a show that has an opportunity for lots of material. I can’t speak to when this show or when this story sees its end; it’s the thing you kind of find,” says Chamberlayne about the storytelling process under Kohan’s lead. “In the writers room, we try to look at what the natural progression of the story is. We had been in the prison for long enough with Piper that it was time to talk about her life outside.”

Whether or not Piper’s release sets the show up for its endgame remains to be seen.

“The question of ‘Is this the end or is this not the end?’ is always looming, but truly, we chapter these characters and find where we want to tell these stories as a group,” explains Herrmann. “So as much as we want to be able to plan for the end — or the end in two seasons or the end in five seasons — we also want to just tell great stories now so no story is ever left behind.”

Herrmann says spin-off ideas have been bandied about — like a Broadway production, or following couples Larry Bloom (Jason Biggs) and Polly Harper (Maria Dizzia) or Cal and Carol Chapman (Deborah Rush) — but expanding Orange‘s world before it’s over feels too much like “robbing from the mothership,” Herrmann says. She adds, “We want people to pay attention to the show we’re making, not a musical number with Piper and Alex. But that could happen in the future, who knows!”

And though Herrmann says they talk about the potential of the end “every season,” she also says Orange always comes from an organic place.

“The truth of the matter is the show could go on forever and ever. We so enjoy having this show as a place to not only talk about what’s going on in the current climate, but for us as a room, it’s been such a therapeutic place for us to come and share and grow as artists and people. So, it’s an ongoing debate.”

She then adds, “It’s Jenji’s show, so we follow her lead.”

The 13-episode sixth season of Orange Is the New Black is streaming now on Netflix. Bookmark THR.com/OITNB for more show coverage.