[Warning: This story contains spoilers from the season-seven premiere of Once Upon a Time.]

Once Upon a Time‘s seventh season premiere introduced a completely new story for fans of the fairy-tale series. The episode served as both a reboot and a sequel of sorts, picking up with the story of how an adult Henry (now played by Andrew J. West) falls in love with a new version of Cinderella (Dania Ramirez).

The hour not only revealed the new identities of the returning fan-favorite characters — West’s Henry is a down-on-his-luck author and part-time Uber driver; Lana Parrilla’s Regina is now an easygoing bartender named Roni; Colin O’Donoghue’s Hook is a police detective named Rogers; and Robert Carlyle’s Rumplestiltskin is now a mysterious figure named Weaver, who also happens to be Rogers’ new partner — but it also introduced a new set of characters.

While the story begins with Henry meeting Cinderella in the past in another fairy-tale realm, it pivots to the present in the Seattle neighborhood of Hyperion Heights, where the characters are all cursed to forget their connections to one another — most importantly that Henry and Jacinda were married and that Lucy is their daughter.

Creators Adam Horowitz and Edward Kitsis talk to The Hollywood Reporter about the newly rebooted story, its nods to the past, returning guest-stars and more. “It’s about a new adventure, and some of the people we know and love are coming with us, as opposed to [the idea that] we’re taking away from the first six seasons,” says Kitsis.

Read on for more about the episode’s biggest reveals. 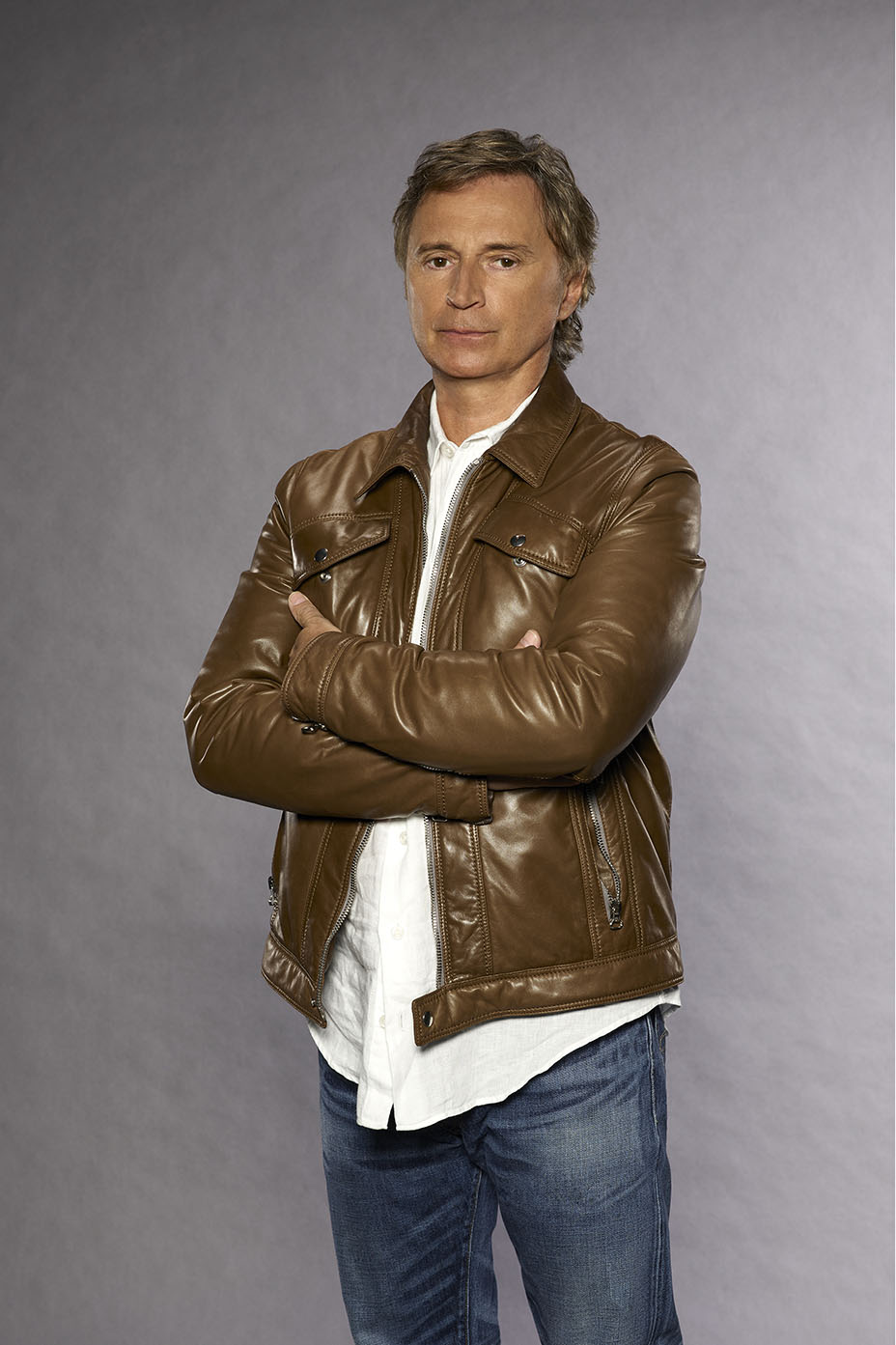 Why the secrecy surrounding Robert Carlyle’s role this season, and what is his character’s goal?

Edward Kitsis: I think the thing with Rumple is he always presents one way, and then you find out he’s got four layers beneath him. It’s no different in this land. So we meet him as Detective Weaver, but episode four is [about] what happened with him and Belle post-the ending, and I think that is the episode where you’ll understand what his new goal is.

Adam Horowitz: The thing with Rumplestiltskin, and now with Weaver, is he’s a character who always has agendas within agendas, and we had a lot of fun peeling back the layers and starting to reveal what he’s really up to and how he fits into this world.

What can you say about how his story will unfold in the coming episodes?

Horowitz: In the coming episodes, we’re going to see that he has connections and relationships that go beyond just Hook/Rogers. We hint in the premiere that there’s a bit of a connection between him and Alice, so all that stuff is going to further develop in the next few episodes. 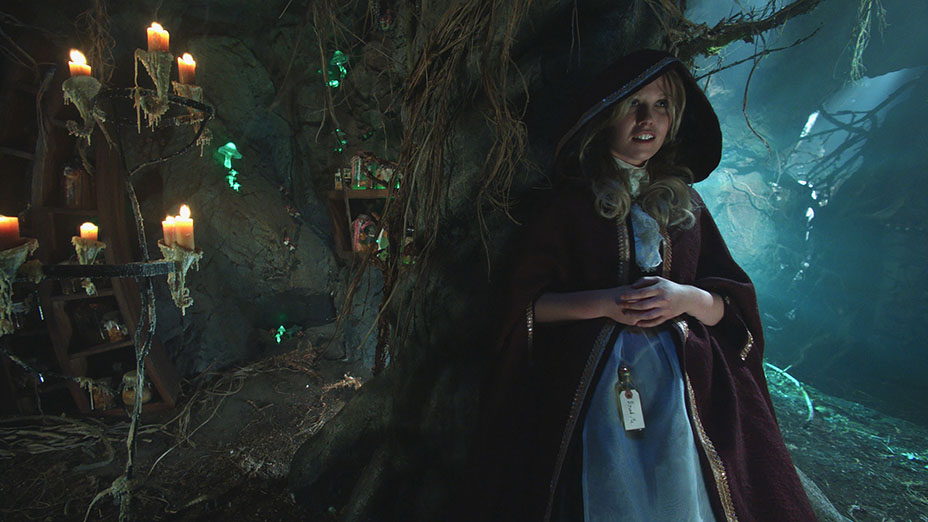 What is Weaver’s connection to Alice? She’s a weird character.

Kitsis: Alice is one of our favorite characters. What we love about her is she truly moves to the beat of her own drummer, and I think that there’s a lot of fun to her. We did Alice on [Once Upon a Time in] Wonderland, but this is a completely different version, I would say. She’s going to have ties to a few characters. She’s one of the characters we’re really excited about because I think, as the episodes go on, the fans are really going to like her, really like her vibe, and then, when they see the connection she has to people they know and love, I think they’ll be very excited.

Horowitz: One of our goals with this premiere was to introduce a lot of these characters and give you a taste of all of them, but there’s a lot of layers to all of them and a lot of secrets and surprises that start to get unfurled as we go along. As you saw in the premiere, you only saw Alice for a brief couple of scenes. You only see Ivy/Drizella for a couple of scenes, but what we hope happens is people start to get intrigued by them, and as we move along, there’s plenty of reveals coming.

Speaking of those other new characters, what can you say about how evil Victoria/Lady Tremaine actually is? Is Ivy/Drizella truly evil as well?

Kitsis: Our introduction into Lady Tremaine is her killing the Fairy Godmother from Cinderella, so I’d say, right now, she is pretty evil, but on the show, evil is never born, it’s made. Right now, she’s going to be pretty evil and pretty wicked for the Wicked Stepmother, and I would say Drizella is — I think, in a lot of ways, we refer to the Wicked Stepsisters in Cinderella, but they don’t get a lot of their own story, and I think that she suffers from that kind of “When is it my turn?” [mindset].

Growing up with Lady Tremaine as your mother, maybe it’s a self-fulfilling prophecy that she’d be wicked.

Kitsis: Yes, and it appears to me — and I only write the show — but it appears that she seems to really want her mother’s approval and can’t seem to get it, so we know that makes you a dangerous character. 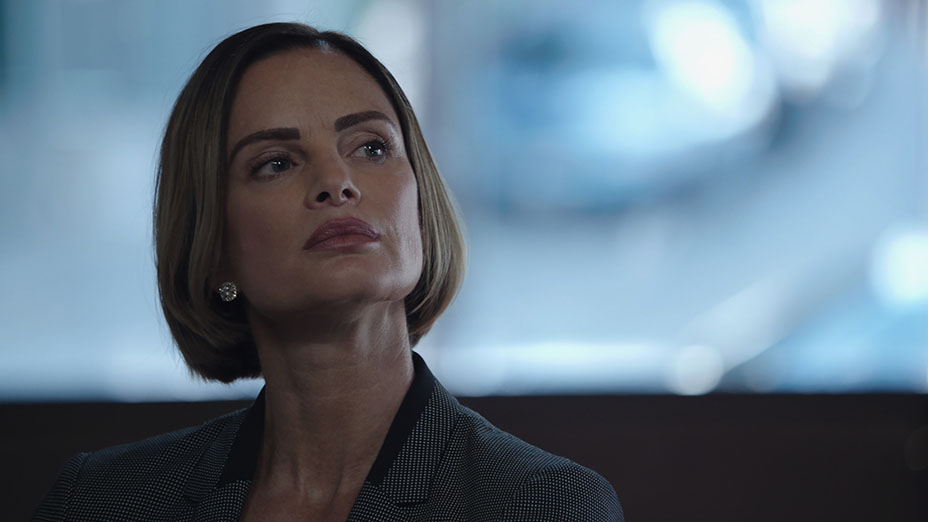 Sabine/Tiana is also just briefly introduced in the premiere. What can you say about her and her relationship with Jacinda/Cinderella?

Horowitz: As far as Tiana and Sabine go, we meet her in the premiere, we get to see her in both worlds, but it’s just the tip of the iceberg with her. We’re going to find that, like so many of the princesses on our show, there’s a strength and a heroism with her that is only hinted at in the premiere, and in a few episodes, we’re going to be delving into her backstory and meeting some of the characters from The Princess and the Frog and see how we introduce them on Once Upon a Time.

Kitsis: As far as Cinderella, for us, the model was [that] we always loved the friendship between Snow White and Little Red Riding Hood, and so you’re going to see that Cinderella and Tiana are very close and they’re good friends. Part of the show is always about how important friendship is and how we rely on friends sometimes when we don’t have family.

This new version of Cinderella is going to the ball, but she’s not going there to fall in love with the prince — she’s going to kill the prince. When did you realize that’s where you were going with the character, and when will you reveal more about her motives for murder?

Kitsis: I don’t know if people realize this, but Once Upon a Time is the very first time that Snow White ever had a weapon in her hand. So if we start the show with Snow White pulling a sword, we could not have Cinderella going to hope she just found a prince to marry. We don’t do damsels in distress, so what we wanted was [to find out] what about her immediately is going to announce that she’s different, but something intriguing? She’s going for a purpose, but it’s a purpose that has a lot of pain behind it. What’s great is that Henry, being the heart of the truest believer, is able to give her a different viewpoint about things. 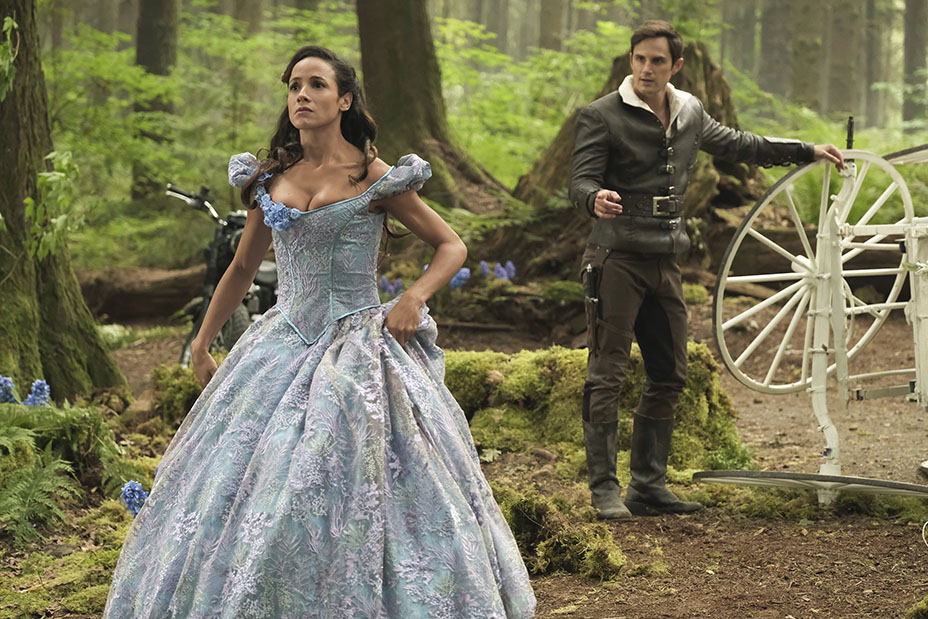 Henry and Cinderella’s scenes take place in the past, when they first meet, and in the present, when they’re cursed to live apart. Will those two timelines collide?

Kitsis: We are going to fill it in. The first couple of flashbacks with them are sort of linear, but it’s very similar to season one, when we open with Snow and Charming’s wedding, the end of their story, and then two episodes later, we saw how they met. We are going to jump around in time this year so that we can have the greatest hits of their epic love story.

Horowitz: It’s fun for us to juxtapose how they met and fell in love in the past with how they are fighting against this curse without even knowing it in the present.

How will Jacinda and Henry slowly come to realize that what this precocious little girl is saying is actually true?

'Once Upon a Time' Scorecard: All the Season 7 Returns and New Personas

Rogers/Hook is now a detective and has a cool prosthetic hand — which is probably more fun for Colin, just wearing a glove instead of a hook.

Kitsis: Look, he loves it. Colin O’Donoghue loves that hook. 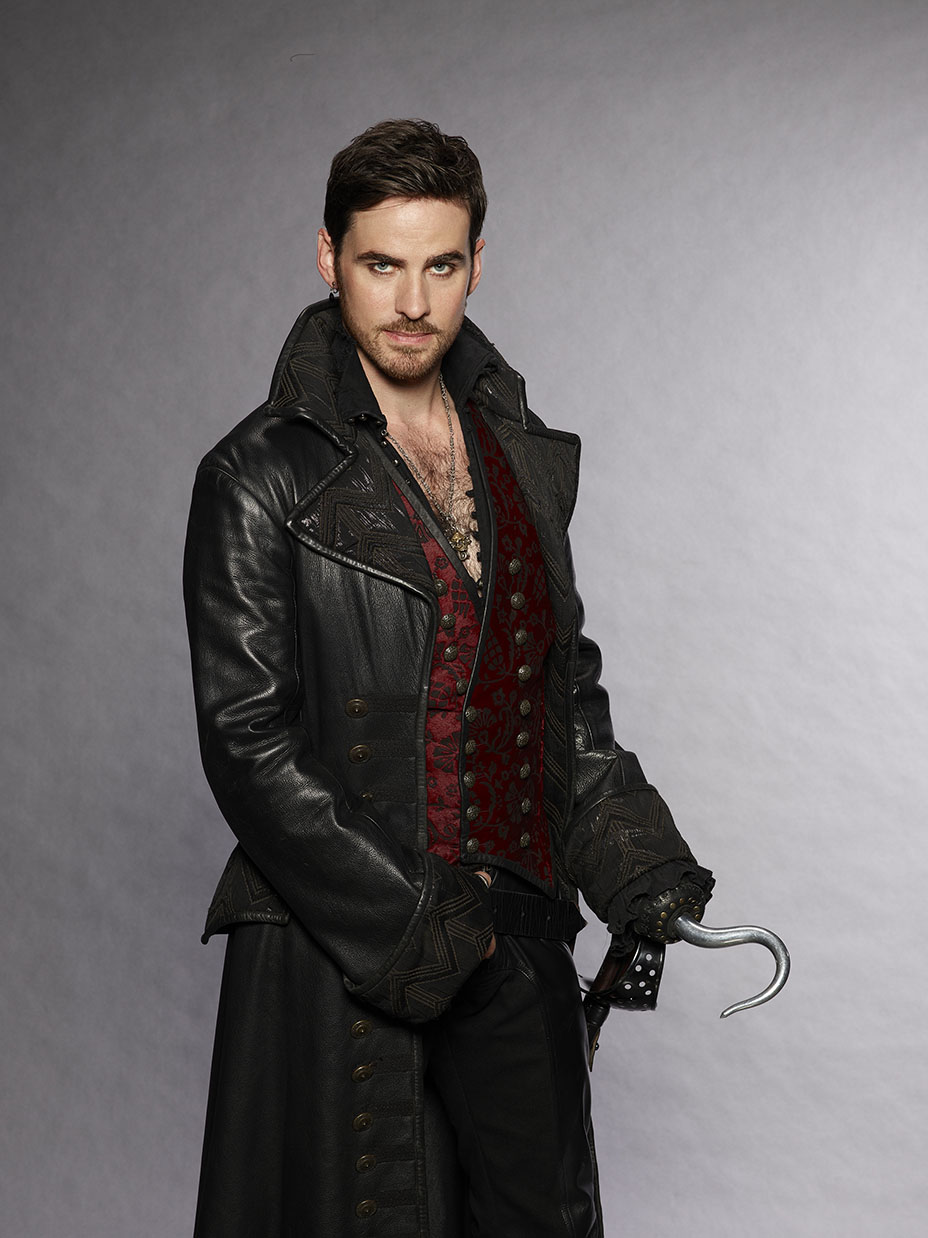 In the premiere, he looks longingly at a picture of Emma. What can you say about how episode two is going to reveal what happened to them after last season’s ending?

Horowitz: It’s hard to say without spoiling, but what I can say to the fans is, “Take a deep breath, relax, it’ll all be OK.” You will understand in episode two what’s going on, and we feel confident that we have figured out a way to preserve the happy ending that we’ve earned after six seasons of Once Upon a Time, but have launched this character in a new and fun chapter in their lives.

Beyond that episode, will Emma figure into the story?

Horowitz: This is a conversation to have after [episode two]. What we can say is the first six seasons of the show are very important to us. We know how important they are to the fans, and we do the best to honor that and make it a part of what we’re doing going forward.

Jennifer Morrison is returning in episode two and Emilie de Ravin in episode four, but what can you say about Rebecca Mader’s return?

Kitsis: What is so much fun is we saw the Wicked Witch pretend she had a cursed character for a little bit in season three as the nanny. This time she is truly under a curse when we meet her, and her introduction and what her cursed persona is is probably one of my favorite introductions on the show.

Horowitz: Let me say this: Rebecca Mader knows how to make an entrance, and we really look forward to the audience seeing how she enters into season seven.

Kitsis: And we’re exited to see her and Regina as sisters, which we’ve explored a little bit, but we’re really excited to keep going on that storyline.

What do you want fans to take from this rebooted premiere?

Horowitz: Our hope is that longtime fans of the show will take from this that it is the spirit of Once Upon a Time, and part of the spirit of Once Upon a Time has always been a show where we started with what appeared to be an ending and found a new beginning. That’s what we’ve tried to do with season six into season seven — take an ending and turn it into a new beginning — and we hope the fans are open to it, and we hope the fans come along for the ride.

Kitsis: Once Upon a Time was always a show about hope. It was always about believing in fairy tales no matter what, and in today’s world, we need it more than ever. For us, the reboot allowed us to update the show and continue to do themes that are important in today’s world.

Do you see this particular chapter continuing beyond this season?

Horowitz: We have lots of hopes and plans, but ultimately it’s with the audience. Should they embrace the show, there’s many places we’d love to take it.