[This story contains spoilers from Once Upon a Time‘s series finale, “Leaving Storybrooke.”]

Once Upon a Time‘s story book has closed for good.

“The goal was to send the fans home happy,” co-creator Edward Kitsis tells The Hollywood Reporter of the series ender. “It was one last adventure, so we wanted to do something that would please Oncers everywhere.”

The final hour featured Regina; her son, Henry (Andrew J. West); her sister, Zelena (Rebecca Mader); Alice (Rose Reynolds); Robin (Tiera Skovbye); Cinderella (Dania Ramirez); Snow White (Ginnifer Goodwin); Prince Charming (Josh Dallas); Rumplestiltskin and more banding together to defeat evil — in the form of alternate versions of Rumple (Carlyle) and Henry (Jared Gilmore as his original, younger version of the character) — once and for all. For her hard work, Regina was named the Good Queen, leader of the united storybook realms. Her family and friends were all there for her ceremony — even a late Emma (Jennifer Morrison), Hook and their new baby.

Kitsis and co-creator Adam Horowitz spoke with The Hollywood Reporter about their favorite finale moments, the non-negotiable story points they wanted in the episode, whether they ever considered putting other Disney properties (ahem, Star Wars!) in the mix, and what they have planned next.

What were the things you knew you had to include in the finale?

Horowitz: There were a number of things, and I think you saw it in the conclusions to the stories of so many of the characters. We wanted to give the Evil Queen her happy ending. We wanted to see that Emma and Hook had gone on to be happy. We wanted to have Rumple and Belle reunited. We wanted to have all these journeys find a measure of happiness and put the stories in a place for the audience, in their minds, to feel like they’re going on and that the adventure continues.

What were some of your favorite callbacks that you wanted to include in the finale?

Talk about seeing Lana as Regina onscreen with the two versions of her son — younger (Jared Gilmore) and older (Andrew J. West).

Kitsis: It was absolutely surreal and it’s really crazy. What’s great is one, seeing Jared grown up now, and how strong he was. I think this is Jared’s best performance ever, he has become such a great actor and a young adult. And two, Andrew West is amazing because he looked at and studied Jared, and took him into an adult. One of the things that I love about Andy’s performance is, if you noticed, Josh Dallas does a twirl every time he holds the sword. If you remember, there was a season where Josh taught little Henry how to sword fight. So, if you watch Andrew West with a sword, he does Josh’s move because he was taught that. Those are the little things that are done in the show that most people don’t recognize. 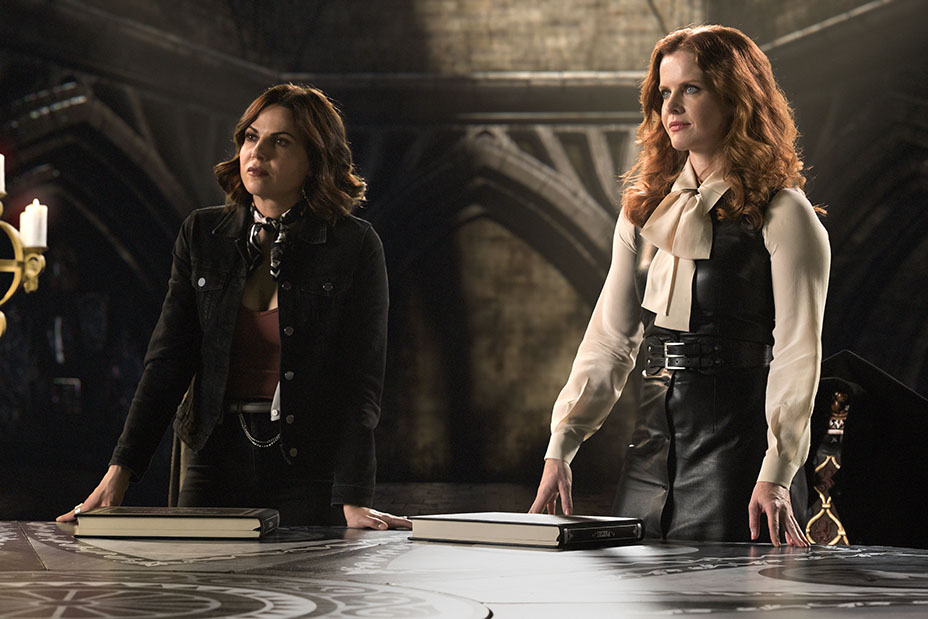 Is there anyone you tried to get but just couldn’t manage to schedule for a final cameo?

Kitsis: No. Our dream was to get everyone back, like everyone that we’ve ever seen on the show, but that was both cost-prohibitive and schedulewise [prohibitive]. Everyone we went to said yes, which was great.

Are you up for reviving Once at any point in the future?

Kitsis: I would say we are up for someone else doing it and we look forward to seeing what that would be.

Horowitz: We feel like we told our story that has been very near and dear to our hearts for a very long time. This was an idea we had more than 15 years ago and we feel very happy with what we did and how we did it and, should the show continue on in some form down the line, I think we’d be big fans.

Do you plan to continue doing broadcast?

Kitsis: I don’t think we’ve said “no broadcast.” I think that the show that we do next, whatever we do next, has to be something that we love and feel very passionate about and so where that is and what home that is, is really going to be generated by the material unless what kind of show it is.

Horowitz: One of the things we love about Once Upon a Time is that it, to us, really showed that broadcast can hold all sorts of shows. In this evolving entertainment landscape, there are so many places for things to exist. So it really depends on what we find ourselves doing and where the appropriate place would be.

'Once Upon a Time' Sets Up Killer Arc Toward Series Finale

One unique aspect of Once and working at a company like Disney is that you were able to mostly pull whatever IP you wanted for different storylines. What was that like for you to play with?

Kitsis: Disney has been a fantastic partner right from the beginning. They really gave us the keys to the kingdom and Adam and I just ran with it.

What was your most insane encounter when it came to using characters or other Disney-owned IP?

Horowitz: I think that so much of the fun was being able to match up all these different characters.

Kitsis: Dr. Frankenstein going on a date with Snow White was always fun. For us it was fun to do the Frozen thing, and getting to meet with people from that right after the movie was fun. Really, honestly, it was insane the whole way through. To be on a set and watch Prince Charming wake up Snow White surrounded by dwarves but have it be in a forest two hours outside of Vancouver or just writing Grumpy, or Mad Hatter or Alice and you feel that history and the power of these characters. You just felt very grateful that we were able to write them because everyone grew up hearing these as their first stories and to be able to take them and make them your own was really a humbling experience. 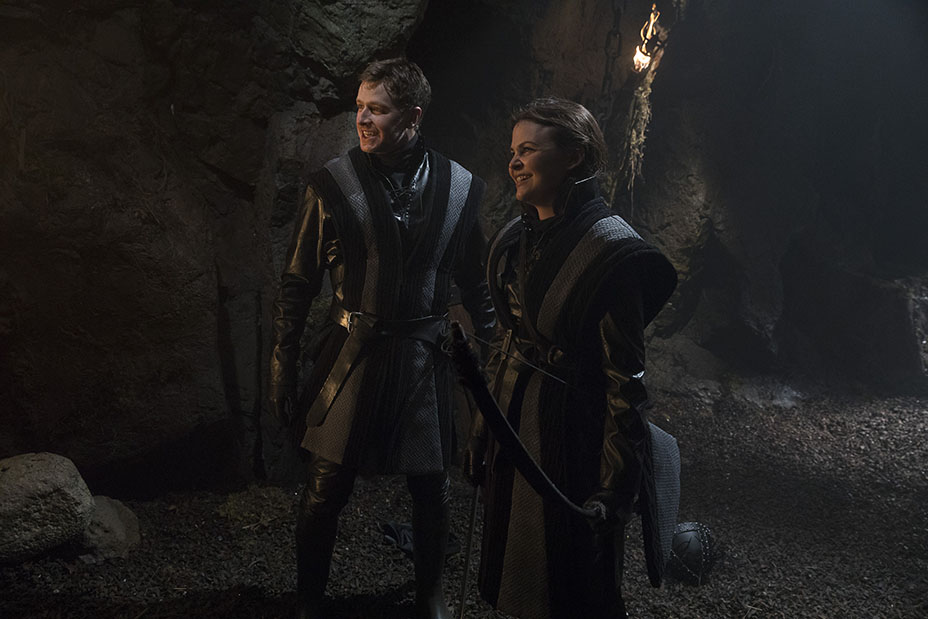 Was there anything from the Disney family you didn’t get to do that you wanted to?

Horowitz: I feel like we did what we wanted to do. If we had continued on I imagine we would’ve found other things but we really feel good about what we were able to get to and how it all fit into this universe of characters we created.

What about Star Wars?

Kitsis: We never felt like that had a place. I think that putting Chewbacca with Henry going to the library to ask Belle about a spell just felt wrong. I think it was universe specific. When we did Jekyll and Hyde and Frankenstein that was kind of pushing the boundaries. We did weird references that no one got. Like, we had a Franz Kafka reference and we did One Flew Over the Cuckoo’s Nest references. But … Marvel and Star Wars were their own universe, and we just felt that their universe is so great because you get to be emerged in them so we never really wanted to reach out to those even though Star Wars, we always say, is our favorite fairy tale.

'Once Upon a Time' to End With Season 7 on ABC

Well, speaking of Star Wars, there are live-action TV shows in the works. Would you want to take that on?

Kitsis: I would love to. I cannot wait to see the Jon Favreau show because we are huge fans of his and we just know it’s going to be awesome. Star Wars really brings out the fan in us. Obviously, every writer would love to write a Star Wars but then there is also a part of you that’s a fan and just wants to be pure about it as well.

Horowitz: I think it’s in really good hands right now with Favreau and all the folks at Lucasfilm. We would be excited to see what they cook up but we just couldn’t be bigger fans.

What was your personal favorite moment in the finale?

Kitsis: It’s hard to say, but when Rumple or Gold looks at Captain Hook in the snow globe and he says the answer to why he hasn’t killed him all these years is, “Because you’re my oldest friend.” That one always got me.

Horowitz: For me, it’s when Snow and Charming reveal themselves. That moment we must’ve watched a hundred times in the editing room and every time I just wanted to cheer.

What did you think of the Once series finale? Share your thoughts in the comments section, below.