Jordan Klepper launched his new Comedy Central late-night show with a close-up on a bulletin board covered in conspiracy theories.

On Monday night’s inaugural episode of The Opposition w/ Jordan Klepper, the host and Daily Show alumni stood before his show’s very own murder board. Covered in a crazed amount of articles, images, maps and drawings strung together by red string, Klepper zoomed in on the linked images of President Donald Trump and North Korea’s Kim Jong-un, and Hillary Clinton and Jared Kushner.

“President Trump may have declared war on North Korea over Twitter, and it’s the boldest foreign policy move since FDR unfriended Japan,” he opened. “Also, Jared Kushner has been using a private email server for official White House communications. You might think this is similar to Hillary Clinton email thing, but it’s not. The law says, ‘Lock her up,” not ‘Lock him up.’ Huge loophole.”

And with that, Klepper introduced his late-night persona to the world.

On his nightly alt-media satire The Opposition, the host will be playing a character, also named Jordan Klepper, an “opportunistic free-thinker” who views himself as anti-mainstream. Klepper spent the majority of Monday’s show introducing this concept to viewers by taking on media personalities such as InfoWars host Alex Jones and former TheBlaze personality Tomi Lahren.

Though the murder board only made the opening bit, it requires some decoding — as it will serve as the source for much of Klepper’s on-air material.

“That’s what’s going on inside of my head,” Klepper told The Hollywood Reporter during a recent visit to the show’s NYC set. “The microphone is where I then spew those thoughts out.”

A closer look at the board while on set provides insight into what Klepper and his team, made up of “citizen journalists” fulfilling certain American stereotypes, will be spewing nightly at 11:30 p.m. Amid throngs of respectable newspaper articles emblazoned in red “Fake News” and “Lies” lettering, several mantras stand out. For example, “It’s only news if you believe it.”

Displayed conspiracy theories question if the moon is flat, if real numbers — like poll numbers — are fake and if Obamacare was an inside job. Below a copy of Klepper’s birth certificate sits a compilation photo of Vladimir Putin with Post-its reading, “Clones?” and “China isn’t real.” An “Impeach Hilary” photo hangs below a drawing of “Kim Jong Rodman,” a “list of things to Google” is blank, another list of “Enemies” names globalists, skeletons and Marxists. 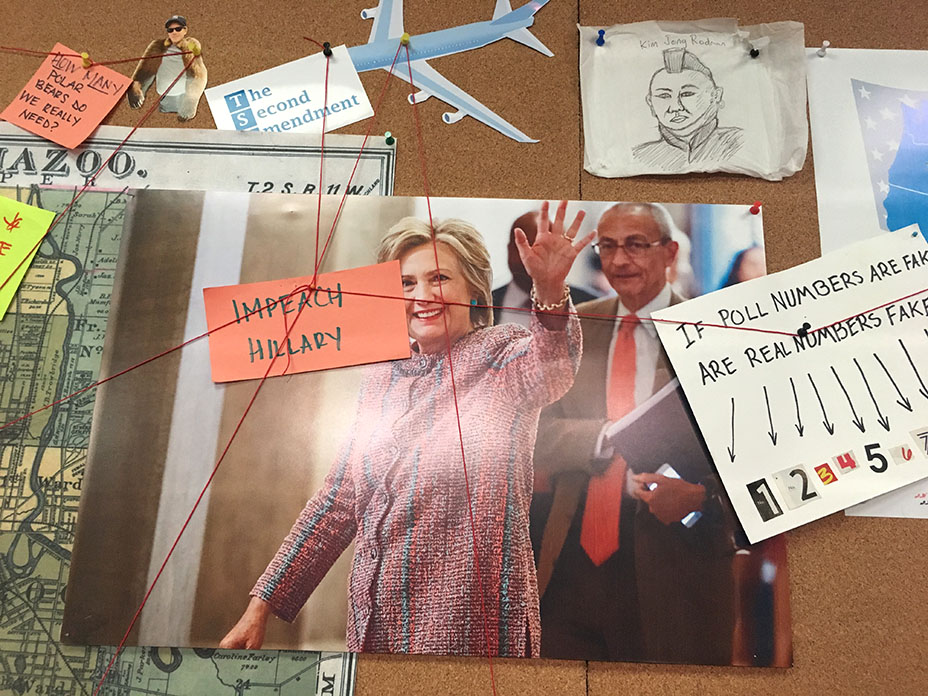 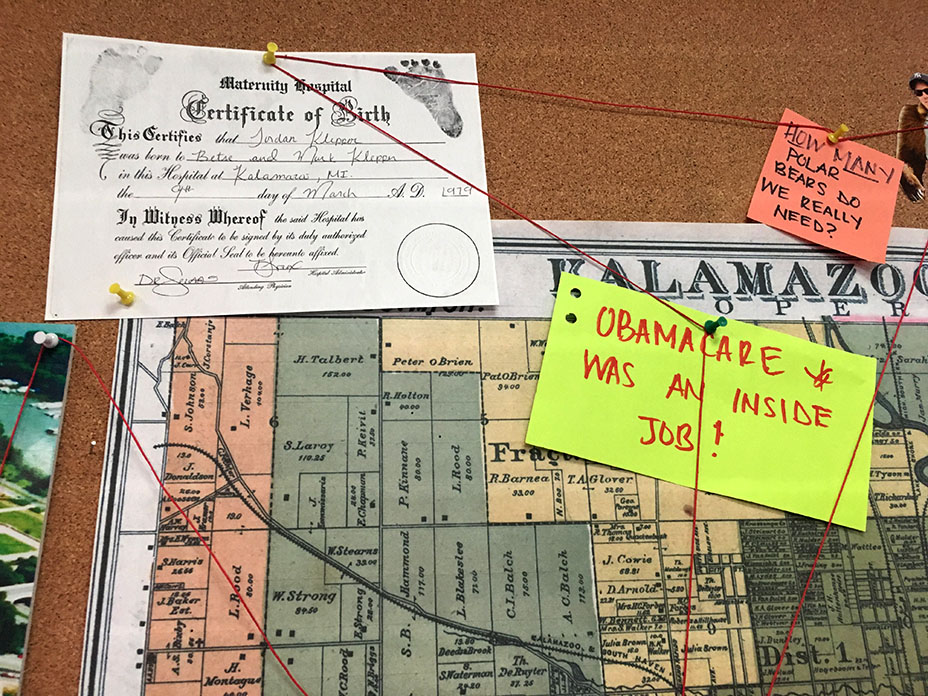 “The board is emblematic of this guy’s world,” Klepper explains. “It’s about looking deeper into things, maybe to the point where you lose complete perspective.”

The ever-changing conspiracy source will be updated as the shows continue to air, with Klepper referring back to the board for the day’s stories. “We’re constantly putting things up there,” he says. “What we have fun doing in the show is taking all these random little tidbits and trying to find ways through them — which is one way in which we do articulate the news. Part of the problem is that what you have is connecting really disparate ideas.”

Also sitting on his desk, a stack of fake news articles.

Still, Klepper has maintained that the show will spoof both the left and the right, and that supporters of the alt-right who are open to seeing where the show leads are more than welcome to tune in.

“We are open to all,” he says. “My character is going to have enough of a wink that people will know what I’m doing, but I’m very curious about what that response will be.”

See how he opened the show (airing weeknights at 11:30 p.m. on Comedy Central) below.