As Santa Barbara County continues to struggle with drought (downgraded from “severe” to “moderate” thanks to recent rains), a water war is breaking out in star-packed Montecito. The fight centers on the proliferation of private wells over the past few years in the 9-square-mile hillside neighborhood, where permits have been issued for residences owned by Friends creator David Crane and producer Dick Wolf.

But it’s the area’s largest landowner, Oprah Winfrey, who is causing the most controversy. Last year she spent $28.85 million for Seamair Farm, a 23-acre estate that borders Winfrey’s main residence, a 42-acre spread she named the Promised Land, which she acquired in 2001 for about $50 million. Images of the Promised Land show luscious landscaping with an array of rose gardens, towering trees and an expansive lawn. Both Winfrey properties have wells, but a well drilled within the past 12 months for Seamair Farm has triggered concern among neighbors — one of whom is Oscar-winning actor Jeff Bridges — with some accusing her of hogging groundwater. “At first, our dealings with her were lovely and charming, and it has been really sad to think that they may not be so,” says Susan Geston, Bridges’ wife. “I would love to find out what is going on up there. I don’t know who knows because things are done and permits are only applied for after the fact.”

In 2015, real estate developer Donovan Judkins paid $4.5 million for a home to the south of Seamair — it shares a well with Winfrey, along with two other residents, as part of a long-standing property rights agreement. But when Winfrey’s new well was drilled, Judkins says he and other neighbors felt she was trying to extract more water at a faster rate. “We believe the only reason Oprah bought [Seamair Farm] is for the aquifer below so she could extract massive amounts of water from it,” says Judkins. His suspicions grew after permits were posted on Seamair for the installation of water tanks. “I’ll bet you that she alone is using 10 or 20 times what everyone else is pulling from that aquifer.”

Winfrey’s spokesperson says of the shared well, “The Seamair equestrian farm was purchased in February 2016 and the property included two existing wells; one of those wells is shared with neighbors. Sixty percent of that water supply goes to three neighbors and 40 percent to the property owner, which is contractual. A new well was permitted and built, and the property uses less water since it was acquired. Montecito is a special community, and living in Southern California, particularly during the years we have been affected by the drought, has made it necessary to be very mindful of the water consumption. We have been in contact with local officials, community leaders and our neighbors on conservation and sustainability. We have taken steps to conserve water, let some acreage go brown and used drought-resistant landscaping.”

Hollywood’s enchantment with Montecito dates back to 1928, when Charlie Chaplin and Fatty Arbuckle opened the Montecito Inn; since then it has served as a neighborhood of second-home getaways and primary residences to dozens of powerful media figures including Google’s Eric Schmidt, former Vice President Al Gore, Tom Freston and Ellen DeGeneres (who recently listed her villa there for $45 million). In addition to being one of the wealthiest neighborhoods in the country, Montecito is also an unincorporated portion of Santa Barbara County.

While the neighborhood receives most of its services from the county, Montecito’s water is provided by the Montecito Water District, which was founded in 1921 and currently serves about 4,500 customers. The Montecito Water District obtains its supply from multiple sources including the groundwater basin, which is the same network of aquifers that the private wells are drawing from. During the worst years of the drought, the number of wells drilled in areas like Montecito skyrocketed (the cost to drill one ranges from $50,000 at the lower end to hundreds of thousands of dollars). About 70 well permits a year were issued from 2009 to 2013, according to Santa Barbara County, but in 2015 that number jumped to more than 250 and declined only slightly in 2016. 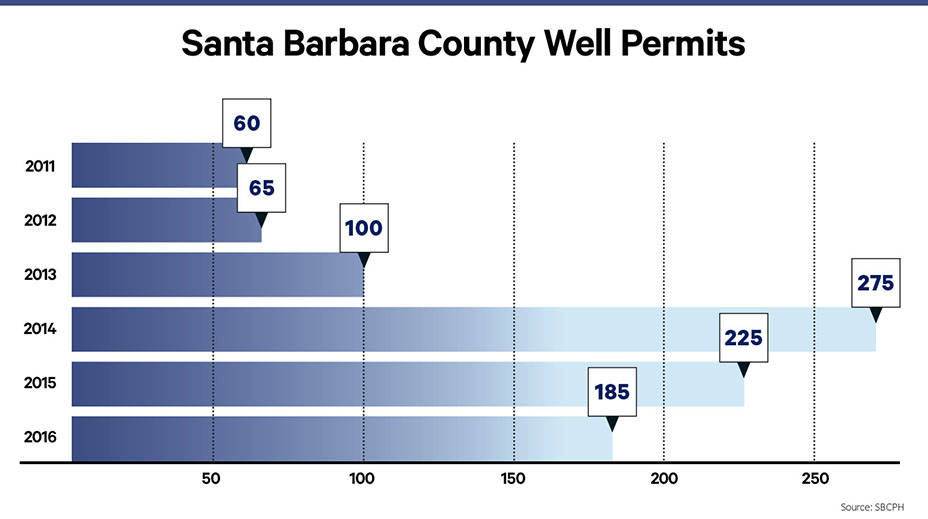 Increased reliance on local groundwater appears to be a direct response to a 2014 ordinance passed by the Montecito Water District, which imposed restrictions on water use and steep penalties. To skirt those limits, wealthy residents resorted to such tactics as trucking in water from other districts. Then came the boom in wells, which are legal: California provides property owners with access to the groundwater basin. But residents and some elected officials nevertheless are determined to slow the proliferation of private wells. “I am not opposed to public shaming,” says County Supervisor Das Williams. “Those wells are in the same water table that the water district draws from, and we don’t know how much water they are pumping. That is a problem.”

Concerns surrounding unregulated private wells are myriad and extend beyond overpumping, which could potentially dry up aquifers. Poorly constructed and unsupervised pumping runs the risk of contaminating the groundwater. Furthermore, in coastal areas like Montecito, overly tapped aquifers run the risk of salt water seepage from the Pacific, which could destroy the entire groundwater basin.

Winfrey isn’t the only Montecito resident drawing scrutiny. Wolf has been engaged in a drawn-out legal fight over his 780-acre ranch in the foothills of the Santa Ynez Mountains. At issue: whether he has the right to extract water from the aquifer and sell it to other communities. (Wolf’s reps had no comment.)

The state’s Groundwater Sustainability Agency this year will conduct a study and issue a long-term plan for monitoring and sustaining water basins. Williams hopes it will mandate meters on wells and require residents to share how much water they are pulling from aquifers. “A water district has to have a point where they have fines and another point where they just cut off the water,” he says. “There are some people that can just pay whatever fine.”