[Warning: This story contains spoilers through the first five episodes of the final season of Orange Is the New Black.]

Two seasons ago, Jenji Kohan came into the Orange Is the New Black writers room intent on tackling the U.S. immigration crisis in a powerful way on her Netflix prison dramedy.

“Jenji came in at the beginning of season six stating that one of the clear things she wanted to do was address immigration detention centers — that’s something she was adamant about,” co-executive producer Brian Chamberlayne had told The Hollywood Reporter last year. The season six finale ended with both the release of leading inmate Piper Chapman (Taylor Schilling) and the transfer of Dominican inmate Blanca Flores (Laura Gómez) to the private prison’s newest venture of an immigration detention center.

That finale reveal allowed for the seventh and final season of Orange, now streaming, to open up its world at the privately owned Litchfield Penitentiary and include a new for-profit Immigration and Customs Enforcement facility. The addition of the ICE detention center gave Kohan and her writers the opportunity to introduce new characters, follow Blanca’s treacherous path and return a fan favorite to the show in order to highlight a range of impactful — and, for the latter, devastating — immigration-related storylines.

Maritza Ramos, the character played by Diane Guerrero, had not been seen on the series since she was separated from best friend Flaca (Jackie Cruz) and the rest of the core inmates in the season five finale. The actress, now speaking to THR, says she had been watching on the sidelines and hoped her phone would ring.

“I saw the seeds planted with Blanca and all I could do is say, ‘Please tell this story and I hope that I’m a part of it.’ And they called,” Guerrero says of returning to Orange for a five-episode arc in the final season — one that ends with her character’s heartbreaking deportation. “Immigration and detention centers are multiplying in this country and with what we’ve seen at the border and the separation of families and our current administration’s inhumane laws, I thought it was super important to tell this story as Maritza.” 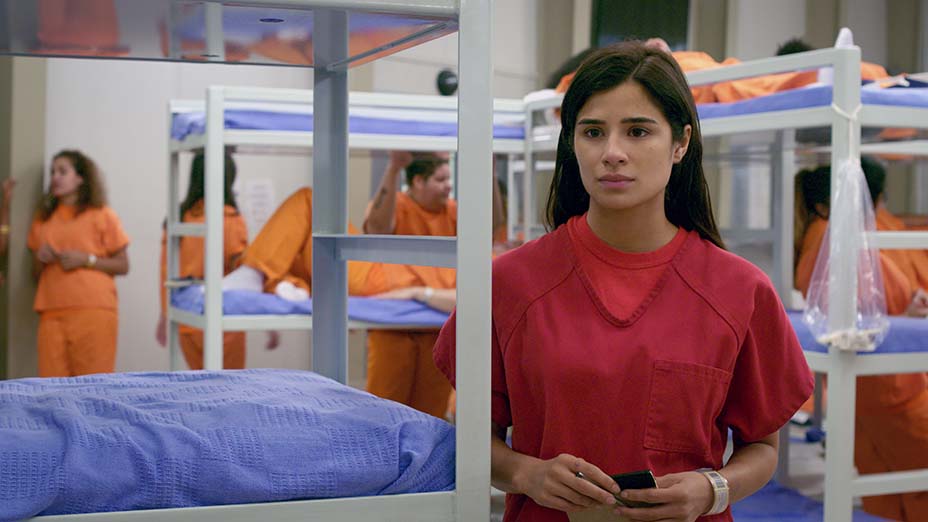 When Orange travels inside prison owner PolyCon’s detention center, Maritza has arrived as the result of an ICE raid at a nightclub and the former inmate not having her identification. It was revealed that Maritza had actually gotten out of prison and she spends her first days hitting roadblocks while trying to flag what she believes is a mix-up.

But many women, like Blanca, have been there for some time and try to warn her of the fresh injustices of their new home, which Fig (Alysia Reiner) has been appointed to run but soon realizes she has little power over. Unlike in prison, detainees do not have a right to a lawyer for their immigration hearing. They can’t make a phone call until money has been added to their account, but no one knows where they are and the machine is broken anyway. Maritza can’t even send a letter because she has no money for a stamp. Blanca tells Maritza that it’s worse than prison; the ICE agents worse than the guards.

Guerrero and Gómez, who are both activists in immigration reform, told THR they had emotional phone calls with the writers about their personal storylines.

“I was so warmed by all the research Jenji and the writers did,” says Guerrero of the writers room making firsthand visits and speaking to immigration attorneys. “I remember getting that call and [executive producer] Carolina Paiz and I were just crying because we felt so passionate about this story.” (Currently, 50,000 immigrants are held in over 200 county jails and for-profit detention centers, according to Paiz.)

Gómez adds of the contributions she made in her conversations, “They were looking for the truth and the humanization of these characters. I had some thoughts [that I would be coming back after the season six finale] because I could sense that Jenji and the writers were really going to deal with this issue in a very serious matter. And when they told me, I went, ‘OK, I get it now. We’re going for the jugular.'”

Production on the seventh season began last summer and was plotted six months prior. Since then, the crisis at the border has intensified, and the amplified news coverage of inhumane conditions at ICE-run facilities have revealed how the situation has worsened. “When they went it wasn’t as disgusting as it is now,” says Guerrero. “Maybe you didn’t see 158 people in a room that only fits 50. You see how dire the situation is in these other countries. Like El Salvador, in Mexico and Guatemala.”

Orange introduces women that Maritza and Blanca meet in the detention center who are facing similar plights. The third episode also fleshed out the romance between Blanca and Diablo (Miguel Izaguirre), who both immigrated to the U.S. and were documented when Blanca went to prison. After she was shipped around the country to different detention centers, Diablo finally reunites with Blanca when she’s returned to Litchfield, only to be carted away by ICE agents in a heartbreaking visitation room scene; he has been waiting for his expired green card to be renewed. 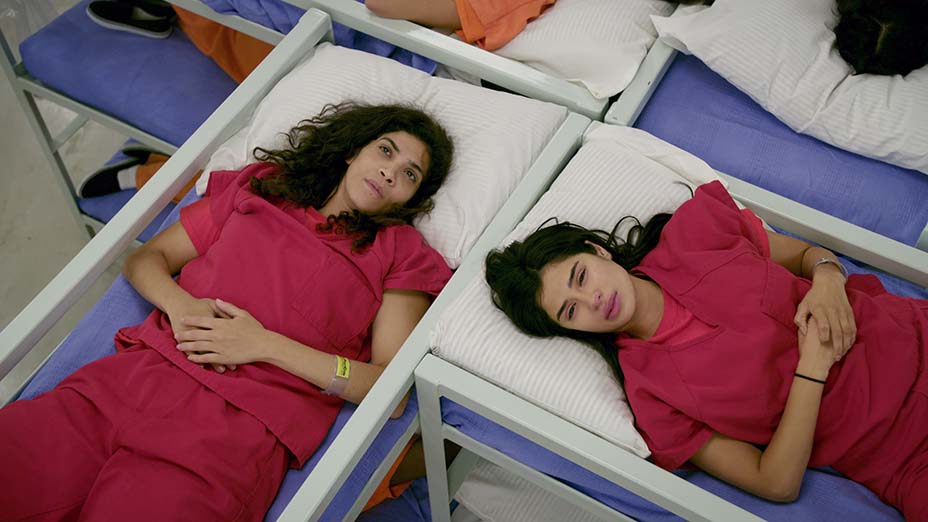 In the end, a desire to help other detainees is what leads to Maritza’s deportation in the fifth episode, “Minority Deport,” which was directed by Orange‘s Laura Prepon.

It’s explained that PolyCon, the corporation that owns and makes money off Litchfield, is responsible for feeding the detainees. So a kitchen crew made up of Red (Kate Mulgrew), Gloria (Selenis Leyva), Nicky (Natasha Lyonne), Lorna (Yael Stone) and Flaca — making for a heartfelt but short-lived reunion for Flaritza — gets reassigned to the detention center. Flaca is able to get a hold of Maritza’s mother and informs Maritza that she has been lied to her whole life and that she, in fact, was born in Colombia. They also help get Maritza the number for a free lawyer and when she shares the number with her fellow detainees, who are equally desperate for help with their cases, she catches the attention of the ICE agents.

Shortly after, Maritza is handcuffed and boarding a plane to Colombia, and the image viewers are left with is powerful. The beloved and lively inmate is terrified and, in a special effect, disappears into thin air as all the passengers fade away.

“They told me that Maritza’s story wasn’t going to look like my personal story, which I was so grateful for. What we saw was that there are so many different circumstances and ‘immigration stores’ that one could have. It’s not just the one,” says Guerrero, who is the daughter of immigrant parents from Colombia who were deported when she was 14. “Maritza came as a baby and didn’t know she was undocumented. She is going to this totally unknown place and that’s exactly how it feels to a lot of people who go through this. It’s as if you’ve never existed and this banishment into thin air. So that effect was really powerful.”

Guerrero, who was born in the United States, has been publicly sharing her story since writing her 2016 memoir. Recalling the experience with her parents, Guerrero says, “I’ve often described what it’s like to see my mother be taken in a van to the airport, to be sent off. It was one of the most heartbreaking experiences I’ve ever had to go through. Seeing my parents in a detention center and having to see their faces through that little window. My mother’s face through that metal window in that van. I never saw my mother enter a plane, but I can imagine. Going through it [on Orange] reminded me of how lonely that experience is, to feel like you’re worthless. To be told, ‘You cannot be here.’ What a mindfuck that is to everything beautiful that you are.”

She also paints a picture about what Maritza would be facing when she steps off that plane: “She would get to Bogota and she wouldn’t know anybody. As you saw, she hardly had any contact with her family. You’re out on the street. You sign this paper that basically says you can never come back to the United States of America and you’re this new country’s problem now.”

For Gómez, who left the Dominican Republic and came to the United States in 2001, having the chance to reunite with Guerrero onscreen was emotional. “We have that embrace and I remember that scene for us,” says Gómez, whose Blanca is still fighting for her status at the end of episode five. “Blanca and Maritza were from the same ‘tribe,’ but they have nothing in common and we never see them having intimate conversations. They were seeing each other as human for the first time in the same circumstances that they do not deserve. It was emotional for both of us and I think you see it on screen.”

Guerrero’s ultimate hope is that her devastating Orange ending can help drive home the message that the country’s immigration system is flawed. In response to the final season’s timely storylines, the OITNB team launched the Poussey Washington Fund, which supports eight nonprofit organizations that focus on a range of issues surrounding prison and criminal justice reform and includes two groups that work on immigration detention.

“I hope the audience sees we all have a part in this. That it’s not something we can leave up to politicians to fix because, look where we are,” Guerrero says. “It’s something that requires paying attention to, educating yourself about and being proactive. Seeing the most innocent cases, like Maritza’s, or even cases where there is some sort of criminality happening, this system isn’t working for anyone. I hope this brings some light to that and that people can have a clear understanding of what the immigration system looks like in this country, acknowledge it is broken and know that they have a huge responsibility in helping to fix it.”

Bookmark THR.com/OITNB for season seven coverage of Orange Is the New Black, which is streaming on Netflix. Visit crowdrise.com/PWF for information on the Poussey Washington Fund.