[Warning: This story contains spoilers from the entire fifth season of Orange Is the New Black.]

At the start of last season, Laura Prepon had this to say about her Alex Vause and Piper Chapman (Taylor Schilling): “Anybody would look at that relationship and think: ‘Alex needs to get as far away from Piper as possible, and maybe vice versa.'”

How things have changed.

Amid its ever-expanding ensemble of characters, the fifth season of Orange Is the New Black (currently streaming on Netflix) found its way back to the relationship that has been at the heart of Jenji Kohan’s prison dramedy since season one. In the penultimate episode of the new season, Piper proposed — and Alex said, “Yes.”

The episode, titled “Tattoo You,” delivered two parallel flashbacks for the pair, providing insight into why Alex ended up sending Piper to jail in the first place. Rewinding to when Piper was still following Alex all over the world, viewers see her ink herself with a fish tattoo signifying beauty for Alex. Years later, Alex tells a stranger that her “Love is pain” inking was in response to Piper’s beauty fish: Love is pain, not beauty.

Now her ex-girlfriend, Alex admits that Piper broke her heart. The prior seasons have already clued viewers into what happened in between these two memories, but seeing Alex express a mix of anger, love and regret over “ruining Piper’s life” by sending her to Litchfield was a new shade of black on the drug-smuggling nomad.

And Alex wasn’t the only one to have regrets.

Enter a cameo from Jason Biggs, who returned to play Piper’s boyfriend Larry Bloom. When Larry gets his own tattoo, of the Kool-Aid Man, Piper is reminded of Alex and drunk dials her ex later that night. “How are you still in my brain? Do you miss me? Probably not. I miss you,” she says in the rambling voicemail, which upon listening causes Alex to kick out her girlfriend. 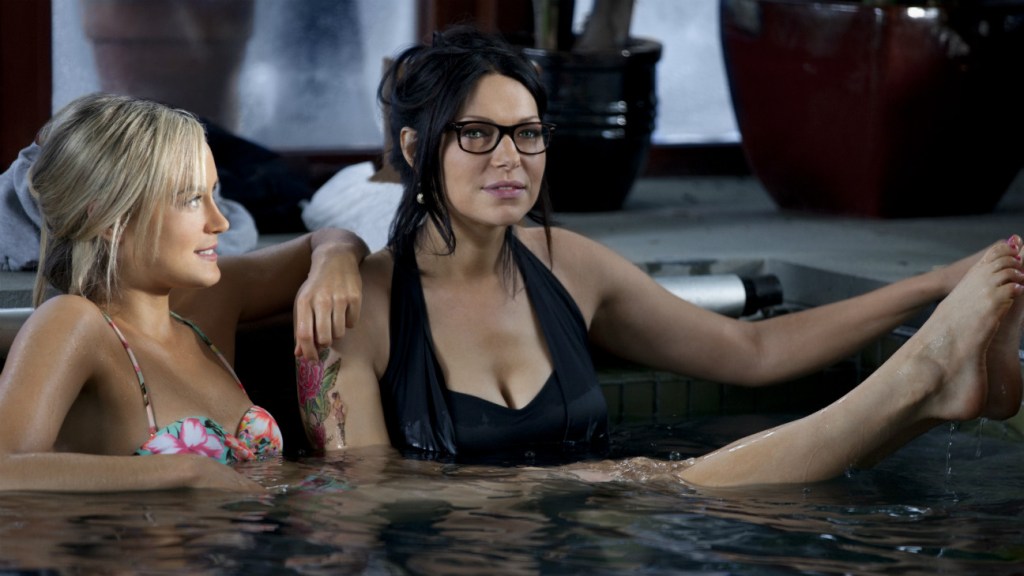 “It always feels so good and so gratifying to be able to fill in parts of Piper and Alex’s timeline,” Schilling tells The Hollywood Reporter. “That’s what was so exciting about the show from the very beginning. To have such a specific thing that you want and that you’re going after, as an actor, is just candy. It’s really fun. So when that stuff comes back into play, for me, it focuses the show on its center and it makes it easy to do my job.”

Prepon agreed that it was nice to get clarity on the aftermath of Alex’s decision. “Whenever you can get a little sliver about why they are the way they are is exciting,” she tells THR.

Back at Litchfield, Piper has a phone conversation with her mother, where she says coming close to dying made her realize she doesn’t want to miss out on being with Alex in this lifetime. “I want to stick around because of her,” she admits.

Only hours earlier in Litchfield time, both Piper and Alex, bound and gagged in the shower curtains they were kidnapped in, survived a near-death experience when Piscatella (Brad William Henke) tortured Red (Kate Mulgrew) and threatened their collective existence from inside a janitor’s closet. They survived — Alex with a broken arm and Piper, a newfound outlook.

“When you look at what they just went through with Piscatella, it puts things into perspective,” says Prepon, who also directed the torture episode. “They just went through this insane thing where they almost died. They saw what happened to Red and Alex’s arm is broken and all these things, and they realize: Life is short, I love this person, let’s just do this.”

Prepon says the Piscatella incident — which ultimately ended with the guard being shot and killed by one of his own riot men — shifted things for the tumultuous twosome. “When something like that happens, it makes people really reevaluate,” she says. “You realize what’s important.”

Schilling was directed by a half-naked Prepon for the pivotal torture scenes. Prepon jumped behind the camera around her own takes and Schilling praised her scene partner for surpassing many directors she’s worked with even “with her arms tied behind her back and wearing a shower curtain.” The actresses were wrapped up so they couldn’t use their limbs and required help from the crew. “We would have to go limp and get lowered into place and then get picked back up,” says Schilling. “I’m now a pro at knowing how much powder you need on duct tape so it doesn’t hurt when it gets ripped off.” 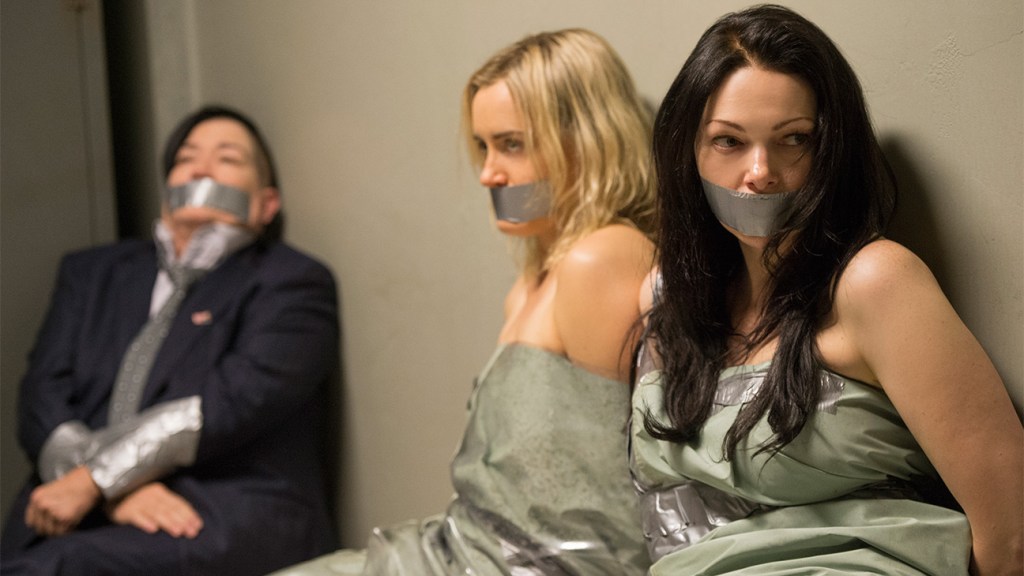 In front of the camera, however, Piper said she “wanted to die” sitting there and not being able to help Alex when she was hurt. Despite Alex’s insistence that Piper leave her alone, Piper returned to the bunker where the inmates were hiding, Alex’s missing glasses in hand. “You have taught me that love hurts,” began Piper in tears. “You’ve taught me that life, it hurts. And I want to be there for you, I want us to be there for each other so that maybe it hurts a little less.” Getting down on one knee, Piper popped the question, asking Alex to be her partner through love, pain and beauty fish. “I figured that’s what you were doing,” snarked Alex before accepting. Then asking, “You had to do this now?”

The mid-riot romantic gesture was, as Schilling says, so Piper.

“It was interesting that that’s where the rubber met the road for them,” says Schilling. “In the midst of crisis — let’s get married!”

Schilling says when she read the script, she had never given much thought to whether Piper would be the one to ask, focusing instead on how sweet of a way the moment is to “propel their relationship forward” after a high-stakes situation. Prepon, on the other hand, said she was very surprised when she read it: “Not even that it was Piper who proposed, but just that it was happening in general.”

Though their celebratory period was short-lived, Schilling froze the moment in time to imagine how they would be as an engaged couple.

“I can’t imagine it being very much different than what their relationship is like now, which is so heightened and so dysfunctional in many ways,” she says. “Marriage doesn’t generally shift course very much and it’s not really a thing that fixes a relationship. I’m curious to see how they react to that.”

When it came to filming the scene, Prepon laughed about the moment occurring in the very unromantic pool room setting. “I love working with Taylor,” she says. “Whenever we have a scene we just jump into it. We do the damn thing and it’s great and fantastic. She’s a baller and we have a lot of fun together.”

After a quick round of “Mazels,” however, the finale sees Piper and Alex joining hands with eight other inmates as the 10 key characters prepare to face the consequences of their actions. Assuming the missing inmates are hunkered down with weapons, the riot brigade is sent in to remove them from the prison, the finale ending on a defiant cliffhanger. Piper, Alex, Red, Taystee (Danielle Brooks), Black Cindy (Adrienne C. Moore), Crazy Eyes (Uzo Aduba), Nicky (Natasha Lyonne), Gloria (Selenis Leyva), Frieda (Dale Soules) and Blanca (Laura Gomez) are last shown clutching hands and rocked by the explosion, unaware of what will be greeting them through the other side of the door.

Schilling and Prepon, at this point, don’t know what the future holds for their characters, or any others, when the cast returns to film season six in late July. Prepon, who is nearing her due date, credits savvy scheduling to her maternity leave not impacting filming — “Alex is not coming back pregnant!” she assures.

As history shows, riots don’t end well for inmates, who often end up with time added to their sentence. The final moments of the season showed the inmates being carted away into two buses, heading most likely to new prisons.

Could Alex and Piper survive being separated?

“I don’t know!” says Prepon. “It’s such a tumultuous, awesome, complicated relationship. Even if they both got out the same day, would they make it in the world? Who knows. But that’s what’s so great about the relationship, is that they bring out the best and the worst in each other.”

Schilling admits that the future — Orange has already been picked up through season seven — isn’t looking so bright, but she still remains more optimistic.

“The idea of a relationship is so different than the day-to-day experience with another human being, so maybe that could help them a little bit,” she says.

Were you surprised by the Alex and Piper engagement? Tell THR in the comments below and keep up with Live Feed for cast interviews and full Orange Is the New Black coverage throughout the week.