The two loves separated by 200 years of time and space finally came face-to-face in the final moment of this week’s episode in Jamie’s infamous print shop in Edinburgh. Upon hearing Claire’s voice, he turned around to see her standing just feet away from him. Unlike his dreams of his lost wife over the past two decades, she was actually there this time, so what did Jamie do? The legendary Highlander warrior … fainted.

Outlander ended quite abruptly on that moment — the most important of season three — leaving fans wanting so much more. With the weight of Claire and Jamie’s reunion coming in the next episode of Outlander, below The Hollywood Reporter rounded up everything to know about “A. Malcolm,” the destined-to-be fan-favorite chapter of the hit drama, including a first look photo and trailer.

When will it air?

It turns out that giving fans that little taste of Jamie and Claire back together again was a beautifully cruel tease from the producers. Outlander is skipping next week, instead airing the print shop episode in two weeks’ time. “A. Malcolm” will air Sunday, Oct. 22 at 8 p.m.

More of the good stuff

But here’s the good news: while viewers have to wait twice as long as normal to see the highly anticipated episode, it will be extended and supersized, clocking in at 74 minutes. That means more of the good stuff, as executive producers Ron Moore and Maril Davis chose to take their time in the print shop, giving the reunion the time it deserved.

“I’m most excited that we chose to do something that most people wouldn’t do, which is to spend about 40 minutes in one set with two characters and see them reconnecting,” Davis says. “Most people would do like 10 minutes and then get out. It’s so long to sit with them in there but to me, it’s a luxury and a journey. It’s a love letter to the fans to be like, let’s see Jamie and Claire reunite and let’s have this bubble fantasy episode before all this stuff comes crashing down on them. They have to go back to the real world so it’s a real luxurious time to spend with them and I think the fans will really enjoy it.”

And yes, as is evidenced by the first-look trailer for the episode below, Claire and Jamie will be reconnecting in every way possible, both verbally and physically. This episode is truly giving the sexy wedding episode from season one a run for its money.

Time to catch up

Haven’t been keeping current with Outlander this season? Has Jamie and Claire’s separation been too much to stomach for five weeks? Starz is giving fans a chance to catch up before the big reunion. The network will air a marathon of the first five episodes of season three on Sunday, October 15 at 5 p.m. so there will still be plenty of Outlander to watch next week despite the reunion episode skipping a week. Yes, that’s five hours in a row. Knock out all the hard-to-watch scenes of Jamie and Claire living their separate lives in one sitting to truly prep for “A. Malcolm.”

Why it’s worth the wait

To give the moment of Claire and Jamie’s reunion its proper due, the Outlander producers are rewinding a few hours when the next episode starts to “change up the perspective of that door opening,” showing the big moment from Jamie’s point-of-view this time around.

“I thought that it’s a great ‘out’ on the faint,” Moore says. “You’re not going to get a better out than that. Where do you pick up the next episode? We didn’t want to just repeat the joke. We didn’t want to just pick up in real time so it wouldn’t have any momentum in it anymore. So it felt like we should reset a little bit.”

Moore “wanted to know what Jamie was going through in his day,” since the audience knows a little bit ahead of the character of what’s about to happen. “He doesn’t know what’s coming and we all do,” he says. “He’s living in Edinburgh and has this other life, who are all these people in that life? It’s a whole different atmosphere. I wanted to really relish and enjoy the tension of that waiting for the door bell to ring and to see what happened from his perspective. It was a fun way to set it up.”

And as fans of Diana Gabaldon’s Outlander novel Voyager know, after this moment Claire and Jamie’s story will never be the same as they re-learn who they are together as a couple and individually and catch up on what the other has been up for the past 20 years. Some news, like the birth of their daughter Brianna (Sophie Skelton), will be received well, while others will be quite shocking to hear. Do Claire and Jamie have what it takes to overcome everything and stay together now that they’re in the same time again, or has too much happened in their time apart?

Check out the gorgeous new portrait from Claire and Jamie’s epic reunion below: 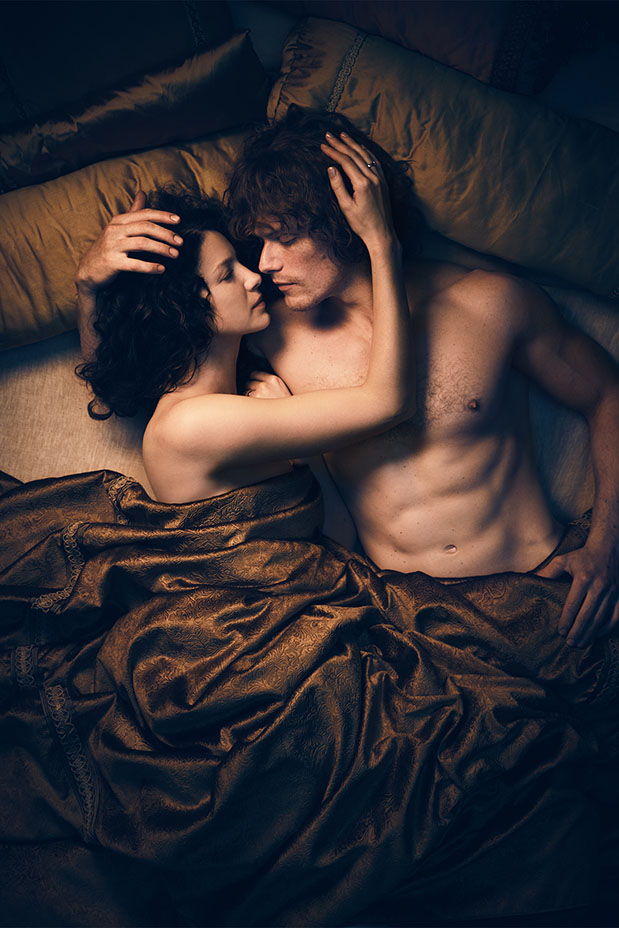