On Thursday, Spike TV will become the first major basic cable network to rebrand itself in the Peak TV era of nearly 500 scripted originals.

Topped by president Kevin Kay, who was charged with leading the rebranding while also overseeing fellow Viacom cable networks TV Land and CMT, Paramount Network executives, showrunners and stars previewed what to expect from the cabler on Monday during its first appearance before press at the Television Critics Association’s winter press tour.

Kay opened the day by noting that Paramount Network’s official launch was a mere 72 hours away, telling the gathered press that he hoped the general entertainment network — launching with a roster of four scripted series and unscripted hits from Spike, would become a destination for “big, bold, high-quality, compelling and relatable” fare.

“We want to be the definitive new home for premium storytelling,” said Kay, who reports directly to Viacom CEO Bob Bakish. “Our goal is to change the game of how viewers experience high-end scripted on basic cable. … We’re a premium network without the premium subscription price.”

Paramount Network will officially launch Thursday at 9 p.m. with a live, Michael Jackson-themed installment of Lip Sync Battle, Spike’s signature show. Its unscripted offerings also include Spike holdovers Ink Master and Bar Rescue. On the scripted side, its first offering will be Waco, the six-part miniseries about David Koresh and the Branch Davidians starring Michael Shannon and Taylor Kitsch. That will be followed by Heathers, an hourlong dark comedic reboot of the cult hit 1988 movie starring Christian Slater and Winona Ryder, that TV Land and Paramount Network president of development Keith Cox developed for the former; another TV Land-turned-Paramount Network series, half-hour scripted 1970s-set feminist comedy American Woman starring Alicia Silverstone and Mena Suvari; and Kevin Costner starrer Yellowstone, picked up straight to series as the cabler’s first show developed specifically for it.

Kay reiterated that Paramount Network’s goal is to reach the advertiser-coveted adults 18-49 demographic. “We don’t want the Spike audience to go away; we want the audience 50-50 male-female. We’re not that far off as we’ve ended Spike. We went with Waco first because it’s a big, broad show but feels like it still resonates with Spike viewers and then broadens our audience,” he said. “Heathers is a young female show. When we tested it, 35- to 49-year-old men loved it. We want to find and evolve our audience. Each of these [shows] has something special to offer. Hopefully they’ll sample us and stick with the other things.”

Kay also stressed that Harvey Weinstein and The Weinstein Co. have both been scrubbed from Waco and Yellowstone. “Harvey has never been part of the creative process for the show and until the company has a new name and a new path, The Weinstein Co. will not be part of either show,” he said. “What Harvey did is disgusting and disheartening. … Nobody wants to be associated with the things that went on there.”

As for Cox’s target for scripted fare, the executive used his time before press to reiterate that they’re redeveloping TV Land’s First Wives Club reboot for Paramount Network with a new writer (Tracy Oliver of Girls Trip fame); teaming with Kyle Killen for Velvet; and working with David Shore (The Good Doctor, House) on a remake of British anthology Accused.

“Bring us your best — and don’t go to Netflix, Amazon or Hulu because Paramount Network is going to be famous for big, bold originals,” Cox said of the content he hopes the town brings to the network. “We want to make linear TV urgent again,” he added later when asked about Paramount Network’s streaming plan.

Producers of the show, originally picked up by Spike but held for the launch of Paramount Network, wanted to explore Koresch from multiple points of view — from his point of view and from inside the Davidians‘ compound as well as from the FBI’s vantage. Kitsch plays the cult leader, while Shannon takes on the role of the FBI’s top negotiator.

“It was a hard learning experience,” Kitsch told reporters. “I’ve never played anybody like this or even close. I was guilty at the beginning of listening to other people’s views [about Koresch] and … it started to sink in. The more I dived in and worked with [producers, survivors and the real people who covered it for the FBI] and uncovered Dave’s backstory … it is one of the first questions you ask: Why? There are still things I’ll never have answers to — or any of us will — with this whole incident.”

Producers provided the Friday Night Lights grad with tapes and hours of calls of conversations with child protective services to formulate who the cult leader was. “This is a guy who came from a terrible upbringing who lived with his heart on his sleeve and was incredibly emotional, smart and manipulative,” Kitsch said.

“The thesis is everyone at their core is kind of an asshole,” said Brendan Scannell, who plays the gender-queer version of Heather Duke (originally played by Shannen Doherty in the film). The 10-episode drama is set in the present day and features a new set of popular-yet-evil Heathers — only this time the outcasts have become high school royalty. Heather McNamara (originally played by Lisanne Falk) is now black and portrayed by Jasmine Mathews; and Heather Chandler (originally played by Kim Walker) has a body like Martha Dumptruck and will be played by Melanie Field. Newcomers James Scully and Grace Victoria Cox star as J.D. and Veronica, respectively. Original Heathers star Doherty has a three-episode role and is the first to appear in the pilot, which was directed by Leslye Headland and written by showrunner Jason Micallef.

The series is an anthology, with the first season serving as a “love letter” to the original movie, Micallef told reporters. “Yes, people do die in our show — it’s Heathers — [so] more than one and less than five of these people are going to bite the bullet.” He said the first season will feature a number of Easter eggs and original lines from the movie but subsequent seasons will be completely reinvented every year. “The idea is to take the spirit and reset it and run with it. The first season is a jumping-off point using the original film and then we’re totally rebooting; it’s a completely different show from the movie.”

The series will, like the original film, feature a number of suicides — something Micallef said the series intentionally doesn’t handle responsibly as he looks to tell a “dark and edgy” story that “shows [teens] as they really are. Unlike the film, the exec producer hopes to really explore the why behind the suicides. “Like the original, we do hit every hot button issue, including suicide. The Heathers are aspirational. [Like] when you watch the original movie, they’re the people you want to be — fortunately or unfortunately,” he said, noting the movie’s Martha Dumptruck character has been slightly altered.

“[The movie] became a cult classic; it was clearly ahead of its time,” Micallef said. “It shows American society in a way that is truthful but that you don’t see that often, which is one of the things that makes something stick; now was the perfect time for [the reboot].”

The Silverstone starrer is a half-hour comedy inspired by the life of Kyle Richards (The Real Housewives of Beverly Hills). The single-camera series is set in the 1970s amid the sexual revolution and the rise of feminism. Silverstone stars as a mother of two who finds herself facing a new world after she leaves her husband. Mena Survari co-stars.

“You’ll see a lot of what my upbringing was like. … In the ‘70s, it wasn’t popular to be a strong woman. … My mom was a single mom raising three daughters in a man’s world,” Richards told reporters.

The series hails from John Wells (Shameless, ER), who took over as showrunner after John Riggi (30 Rock) exited amid creative differences.

Co-star Jennifer Bartels said the comedy explores timely subjects including sexual harassment in the workplace and how women were objectified and sexualized in the 1970s. “You get to see a clean snapshot of what women were dealing with in the workplace as they were trying to create their own financial control,” she noted.

As for the show’s move from TV Land to male-leaning Spike and the eventual Paramount Network, Bartels noted that the Paramount name is associated with huge tentpole movies and that she was happy to be associated with a big brand and to be part of something new. 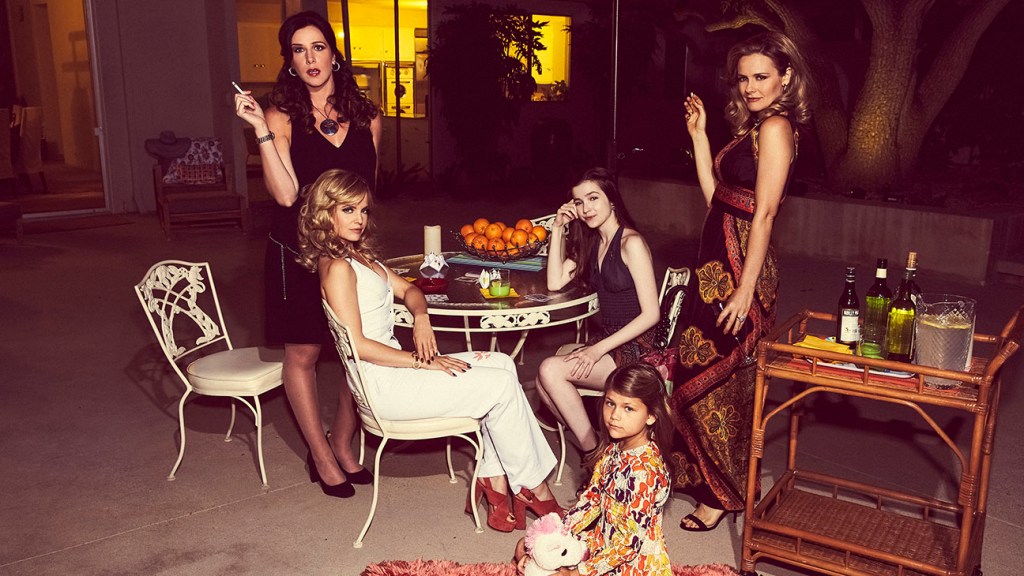 The 10-episode drama from Oscar nominee Taylor Sheridan (Wind River, Hell or High Water) was the first straight-to-series order picked up specifically for Paramount Network. Costner — who is getting an eye-popping $500,000 per episode — executive produces and stars (in his first series regular role) in the family drama that revolves around the Dutton family, led by John Dutton (Costner), who controls the largest contiguous ranch in the U.S., under constant attack from its neighbors: land developers, an Indian reservation and America’s first National Park. The series is described as a study of a violent world far from media scrutiny — where land grabs make developers billions, and politicians are bought and sold by the world’s largest oil and lumber corporations. Where drinking water poisoned by oil wells and unsolved murders are not news, but a consequence of living in the new frontier. It is the best and worst of America seen through the eyes of a family that represents both.

“[Yellowstone] truly encompasses everything we want Paramount Network to be,” said Cox of the series, which he said would be cinematic in tone and production.

Sheridan said the goal was to create a 10-hour movie, with Costner — who previously made Untouchables for the Paramount film banner — noting that it was the writing that drew him to television for the first time. “It’s what led me to [History limited series] Hatfields & McCoys and to Yellowstone,” he said, adding that Sheridan writing and directing the drama was a big part of it. Costner cited the sophistication and rawness of Sheridan’s writing, as much as he liked the baseball and gritty underbelly of the writing on Bull Durham. “I like long movies, I like the world Taylor created,” Costner said, noting that he has a three-year deal for the show (though he suggested he has to check with his lawyer if that number is accurate).

Yellowstone landed at Paramount Network after a multiple-network bidding war. Sheridan said it was the “complete creative freedom” that convinced him to come to Paramount Network. “If there’s such a thing as too much freedom, there was almost too much of it,” he said. “I told them my vision, how I wanted to make it, and they agreed. It’s not a model TV follows.”